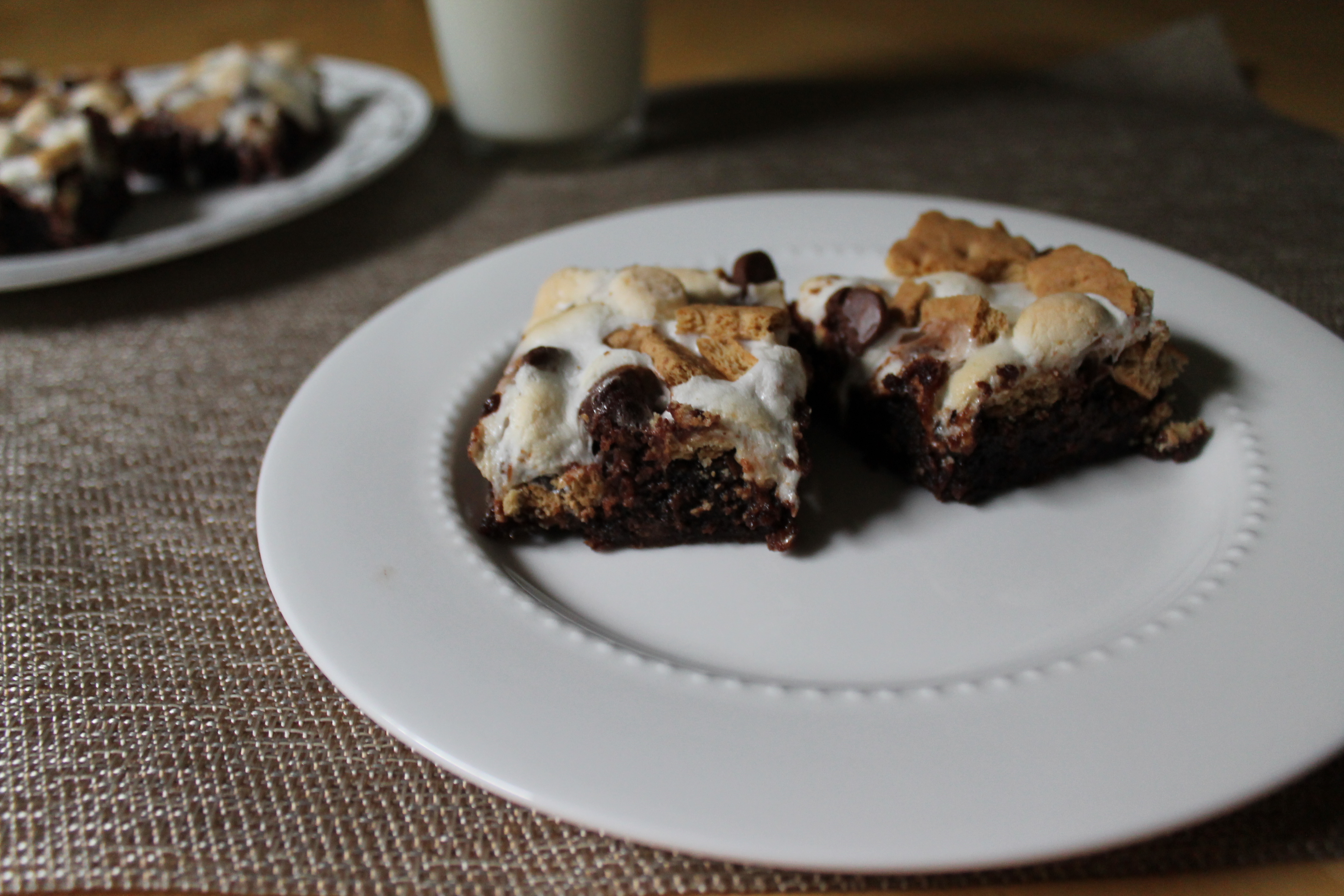 When I was a kid, my dad taught me how to slow-roast a perfect marshmallow.

We would head outside after polishing off our hamburgers and huddle over our charcoal grill, patiently rotating marshmallows one at a time over the embers. I felt this intense sense of victory every time I managed to get my marshmallow right: puffy and gently browned the whole way around.

Imagine my confusion when I went to camp for the first time and watched my new friends sticking their marshmallows directly into the campfire and cackling with glee.

I soon discovered I could eat about four times as many s’mores by catching the marshmallows on fire instead of waiting on the perfect shade of golden brown. Plus, what 8-year-old isn’t thrilled by close proximity to flaming sugar?

20 years later, I still like to burn my marshmallows.

And what better opportunity to make s’mores than the 4th of July? This year, though, I thought I would combine two excellent cookout foods: s’mores and brownies. I am definitely not the first person to think of this. In fact, if you do a search for s’mores brownies, you will find all kinds of different interpretations…some look like actual s’mores with brownies baked inside; some have a decadent, buttery graham cracker crust; some are spread with fluff and others are dolloped with enormous, jumbo marshmallows.

In the end, I decided I wanted to stick with my original vision: a brownie topped with classic s’mores ingredients. And it was delicious!

Begin by making the brownies. I decided to use the scientifically tested brownie recipe from Cook’s Illustrated. It was so amazing! 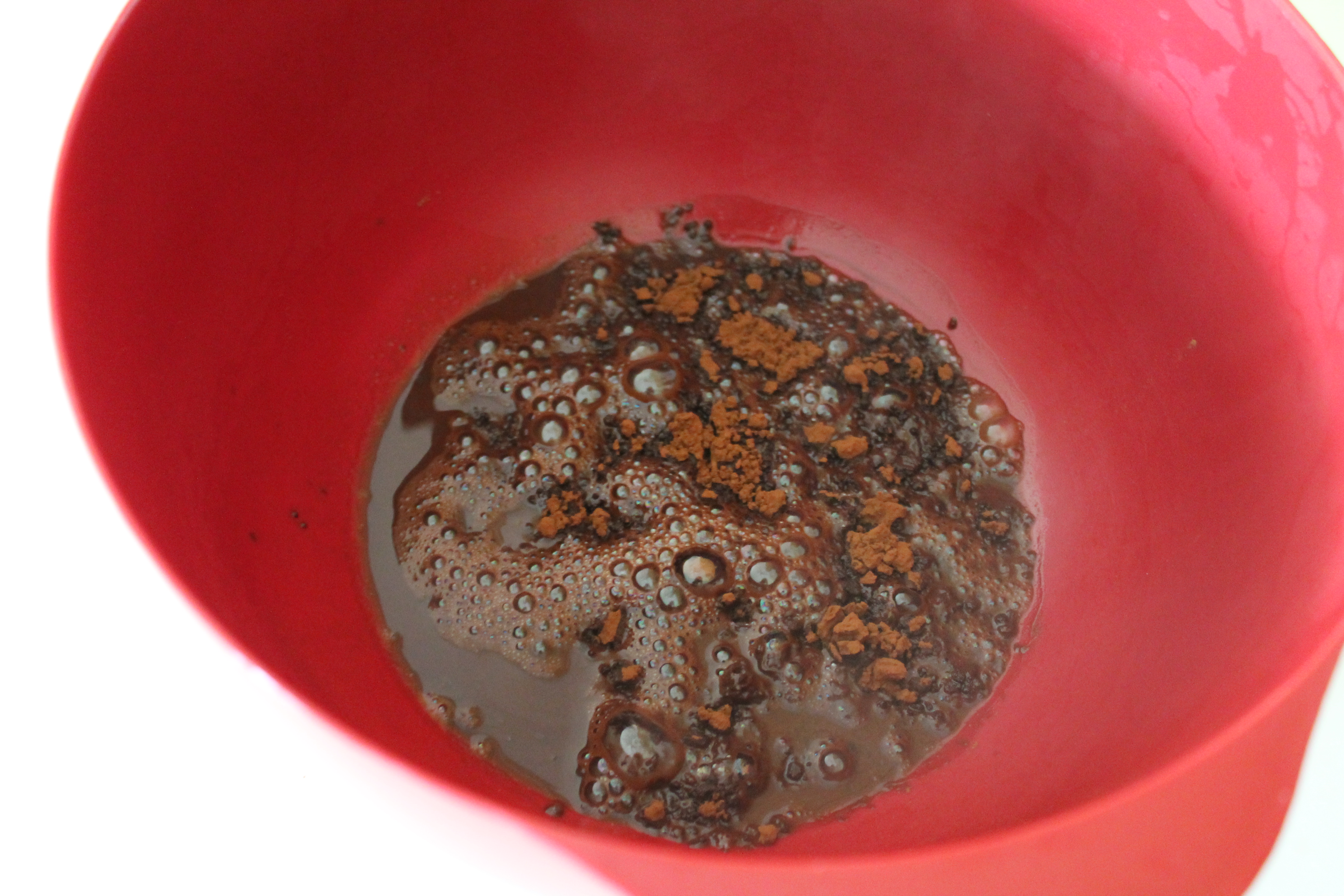 The very first step is to bloom the cocoa, which basically means mixing it with boiling liquid to intensify the chocolateyness. It makes the kitchen smell absolutely amazing. You know you’re doing a good work when the kitchen smells of rich chocolate, am I right? 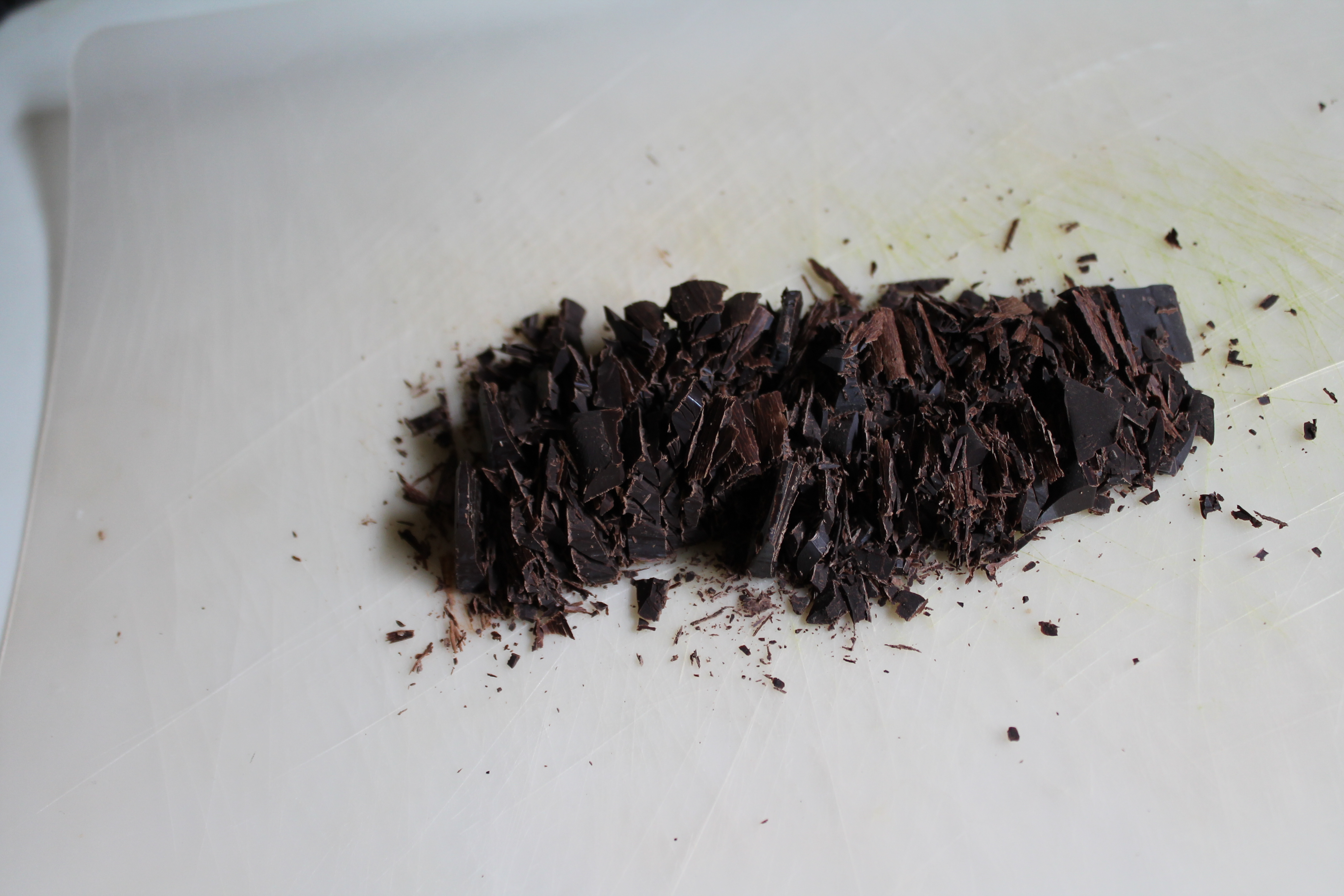 Finely chop the unsweetened chocolate. Whisk it into the hot cocoa mixture. 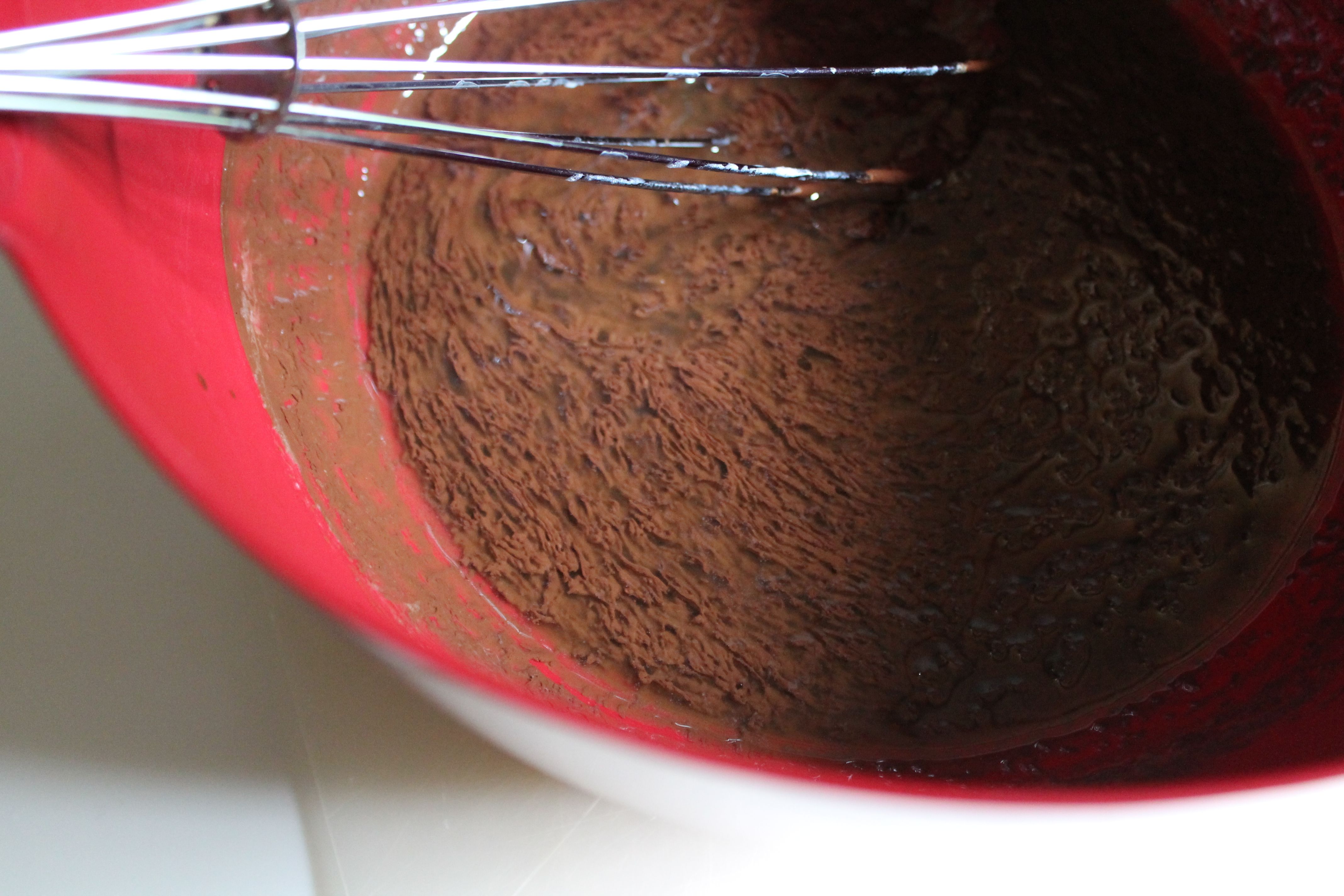 Whisk in the butter and oil. Cook’s Illustrated says that the only way to get good, chewy brownies is to balance the ratio of saturated to unsaturated fat, and the only way to do that is to use both oil and butter.

Of course, the added oil makes the chocolate mixture look a bit curdled.

To fix that problem, we use not just whole eggs, but also egg yolks! Don’t forget to add the vanilla extract.

Now whisk in the sugar. 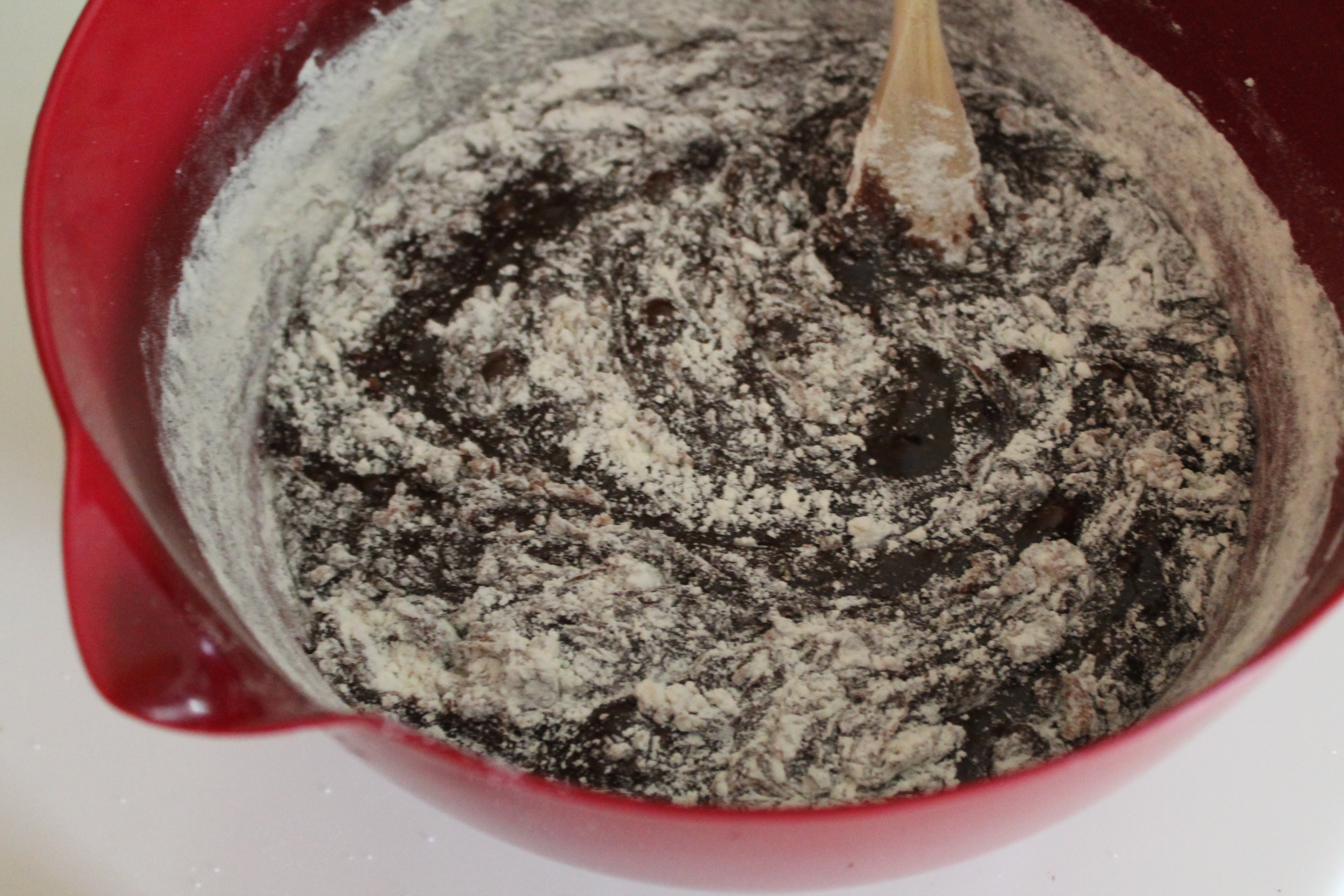 Using a wooden spoon or a spatula, stir in the flour and salt. 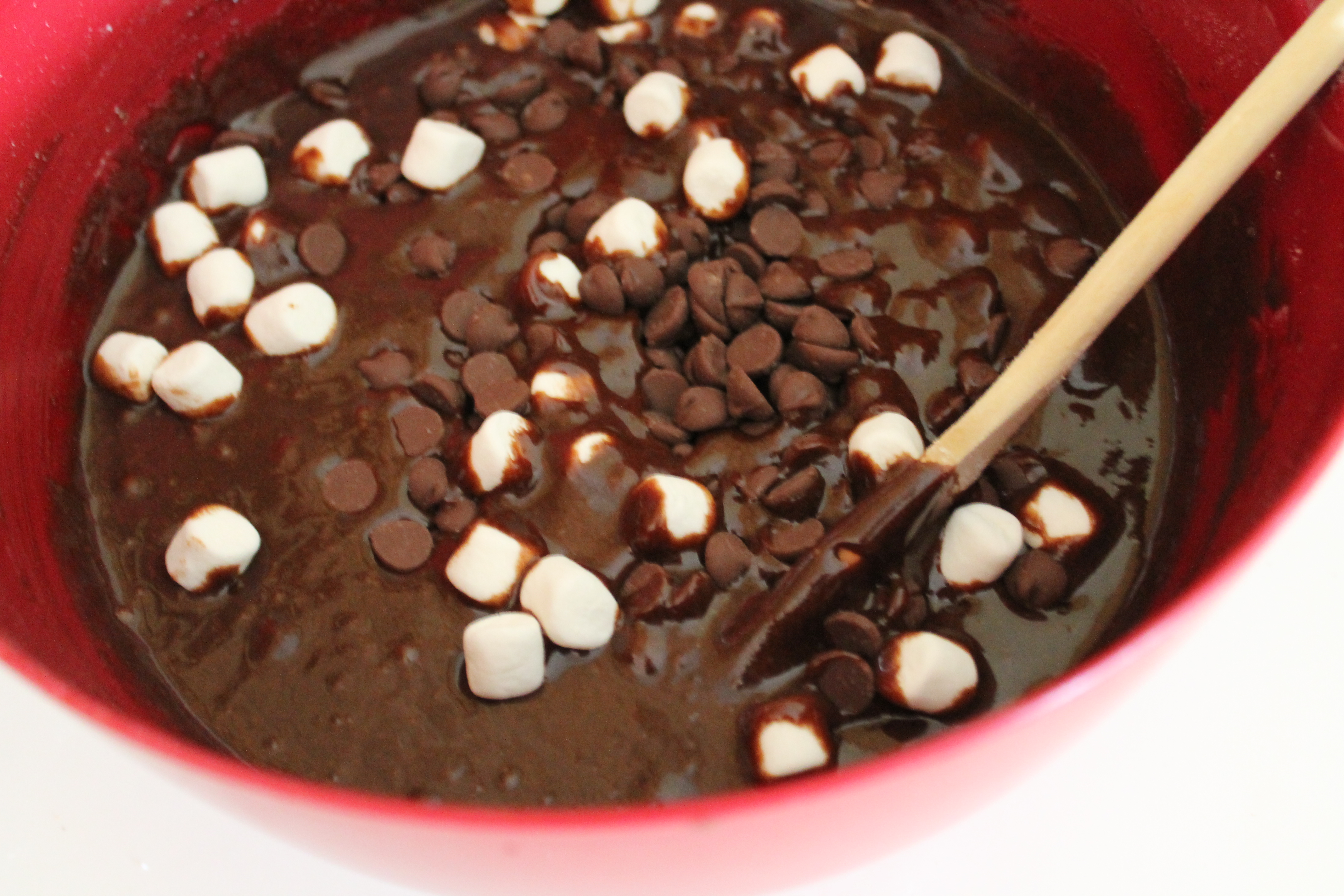 Now, because we are making s’mores brownies, we need to get some milk chocolate and marshmallows up in here! I went for milk chocolate chips, because I think they are delicious. But if you are a purist, then you can use 6 oz. chopped Hershey’s bars instead!

If you want to, you can also stir in some mini marshmallows. These are going to dissolve during baking, leaving slightly gooier pockets in the brownies. It would be really cool if we could bake marshmallows inside the brownies and have them maintain their integrity, but given enough time in the oven, they will disappear. I used them anyway, because I wanted to make the brownies as s’mores-y as possible.

Now bake the brownies at 350° for 30 minutes in a foil-lined, greased pan. 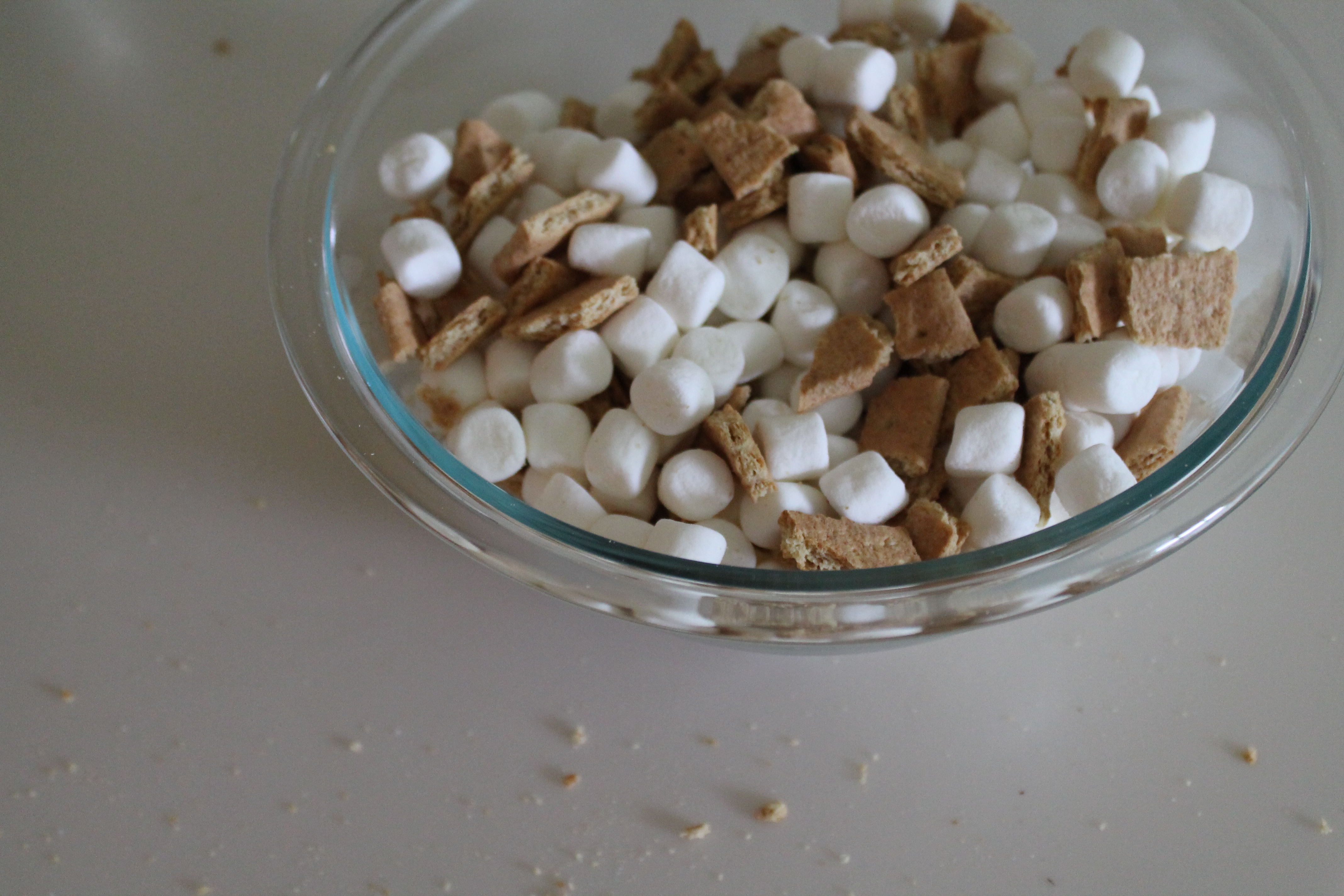 While the brownies bake, break up the graham crackers for the topping and toss the pieces together with the mini marshmallows. 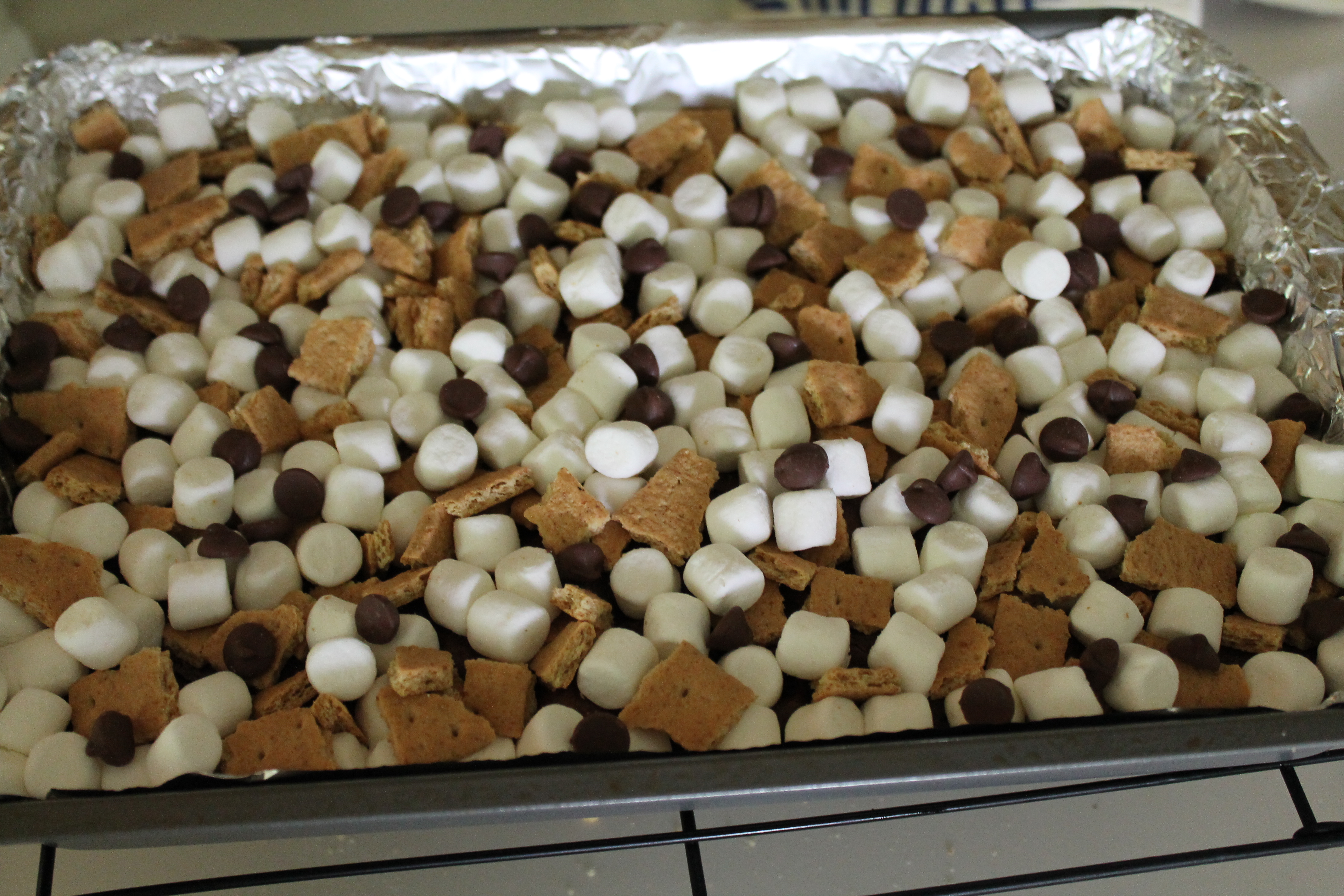 When the brownies come out of the oven, they will be shiny on top and almost completely baked through. Now it’s safe to add the topping! Spread the marshmallows and graham crackers evenly across the surface of the brownies. Press down lightly to help keep them in place. Sprinkle some more milk chocolate chips over the top. 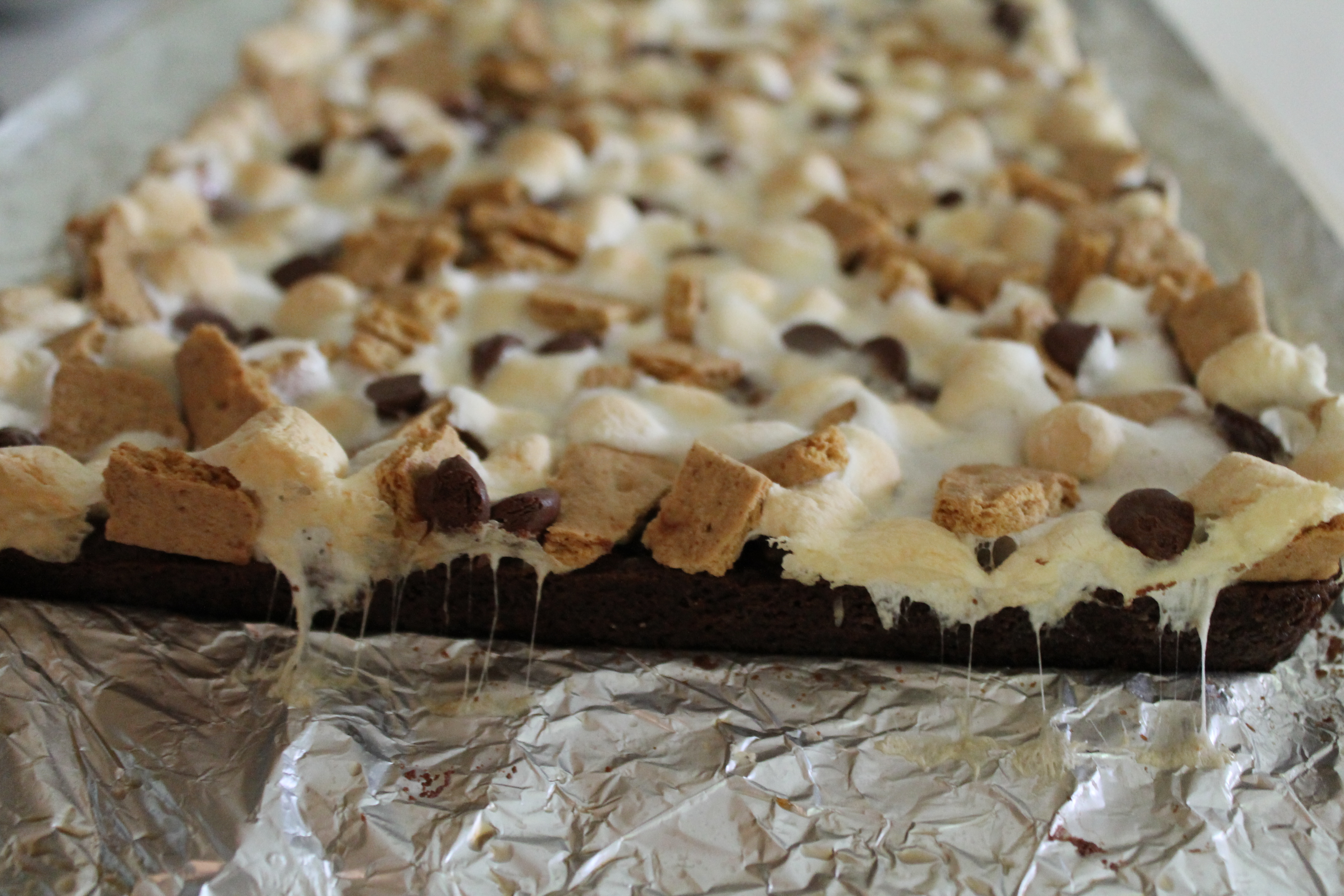 Bake another 10-15 minutes, depending on how dark and melty you want your marshmallows to become. I took mine out after 10 minutes, when they had achieved the perfect, mythic golden toast.

Let the brownies cool in the pan for 15 minutes, then lift the foil out and set the entire tray of brownies onto a cooling rack. Gently pry the foil off the edges. Notice how the marshmallows continued melting after they came out of the oven? Now they are turning into stretchy, sugary goodness. 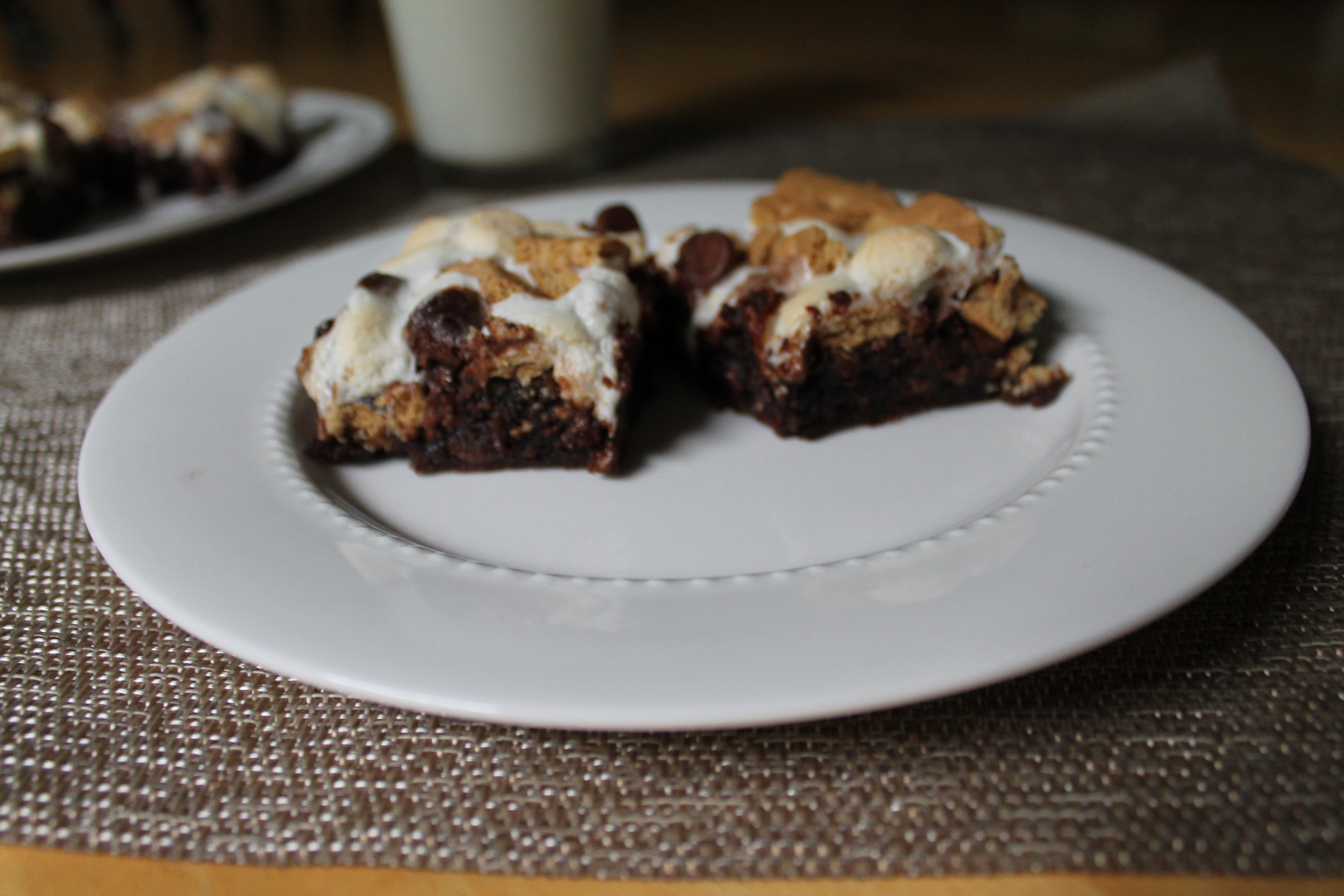 When the brownies are completely cool, cut them into squares. I highly recommend oiling your knife. Yeah, that may sound weird, but the marshmallows are super sticky, so if you want your knife back after the first cut, it will help if it’s sort of non-stick.

And there you have it! S’morey goodness on a rich brownie base.

adapted from The Science of Good Cooking
makes 24

Directions:
Adjust the oven rack to the lowest position. Preheat oven to 350°. Line a 13ʺx9ʺ pan with foil and grease the foil.
Whisk cocoa and boiling water together in a large bowl until smooth. Add unsweetened chocolate and whisk unto chocolate is melted. Whisk in oil and melted butter (mixture may look curdled).
Add the eggs, yolks, and vanilla. Continue to whisk until smooth and homogenous. Whisk in the sugar until fully incorporated.
With a rubber spatula, stir in the flour and salt. Fold in the milk chocolate chips and marshmallows, if using.
Transfer the batter to the prepared pan.
Bake 30 minutes, rotating the pan halfway through.
Meanwhile, combine the marshmallows and the graham crackers in a medium bowl.
Pull the brownies out of the oven and sprinkle the marshmallow mixture evenly over the surface. Sprinkle the chocolate chips over the marshmallows.
Return the brownies to the oven and bake another 10–15 minutes, until the marshmallows are puffed and golden.
Cool in the pan on a wire rack for 10 minutes. Remove the brownies from the pan using the foil liner. Set them back on the wire rack and let cool completely, about 1 hour.
Cut into squares and serve.