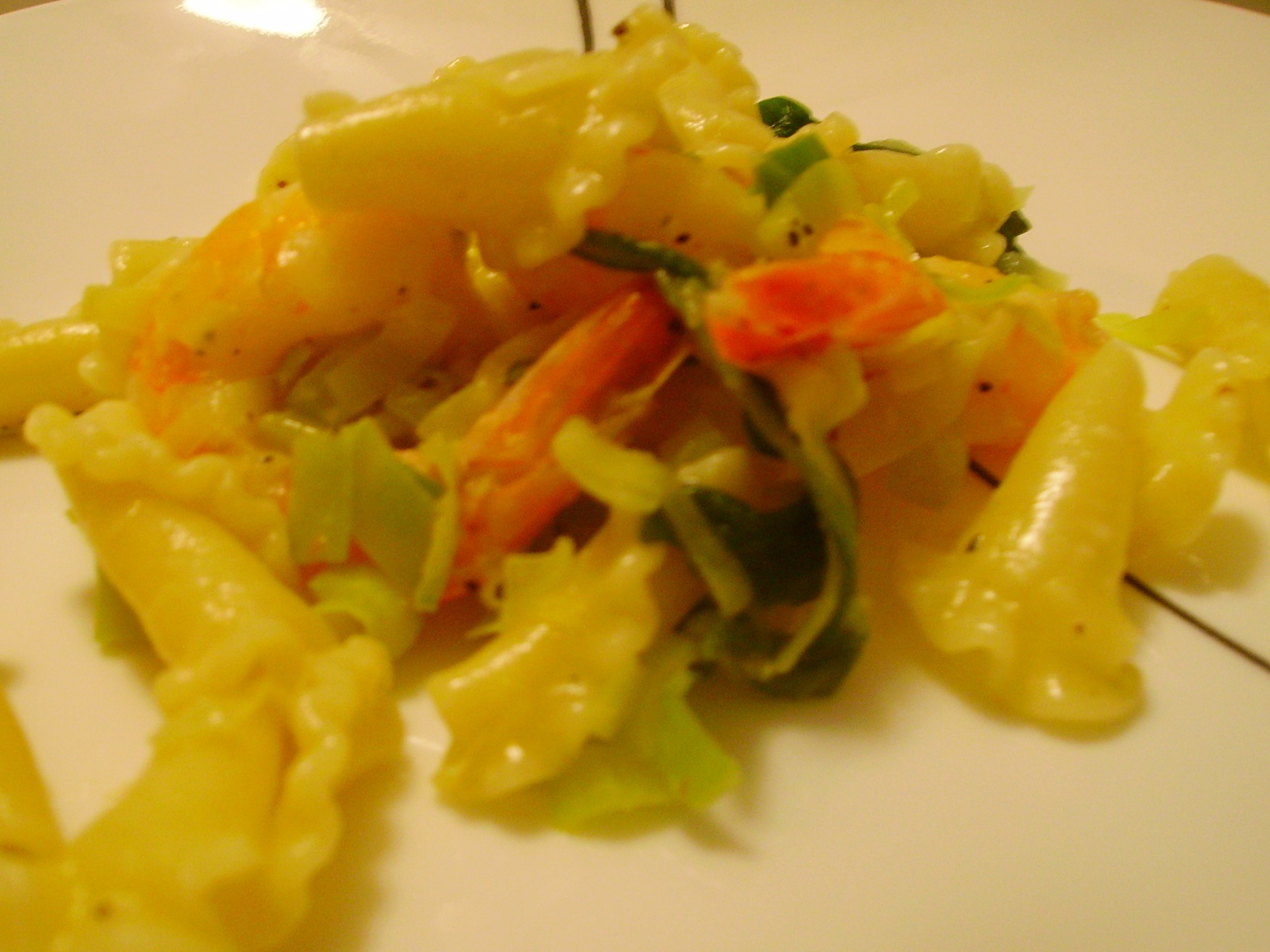 Have you ever peeled and deveined your own shrimp? I have. And you can bet your bottom dollar I’m not going to be doing that again any time soon…

The moral of my 45-minute long saga is to refrain from buying shrimp unless the butcher/seafood guy already did the hard parts for you.

That being said…keep your eyes peeled for shrimp that has already been prepared for cooking! Because you definitely want to make this pasta. It is creamy and garlicky and lightly cheesy. You will love it.

Start by cooking your pasta. You can choose whatever variety you want, but I recommend a short pasta, and anything but fusilli/rotini. The reason not to select those pastas is that they absorb a lot more sauce, and this dish is only meant to have a very light coating of cream sauce…if you use fusilli, then the whole dish will be dry instead of fabulous. I chose campanelle, and it worked really well. 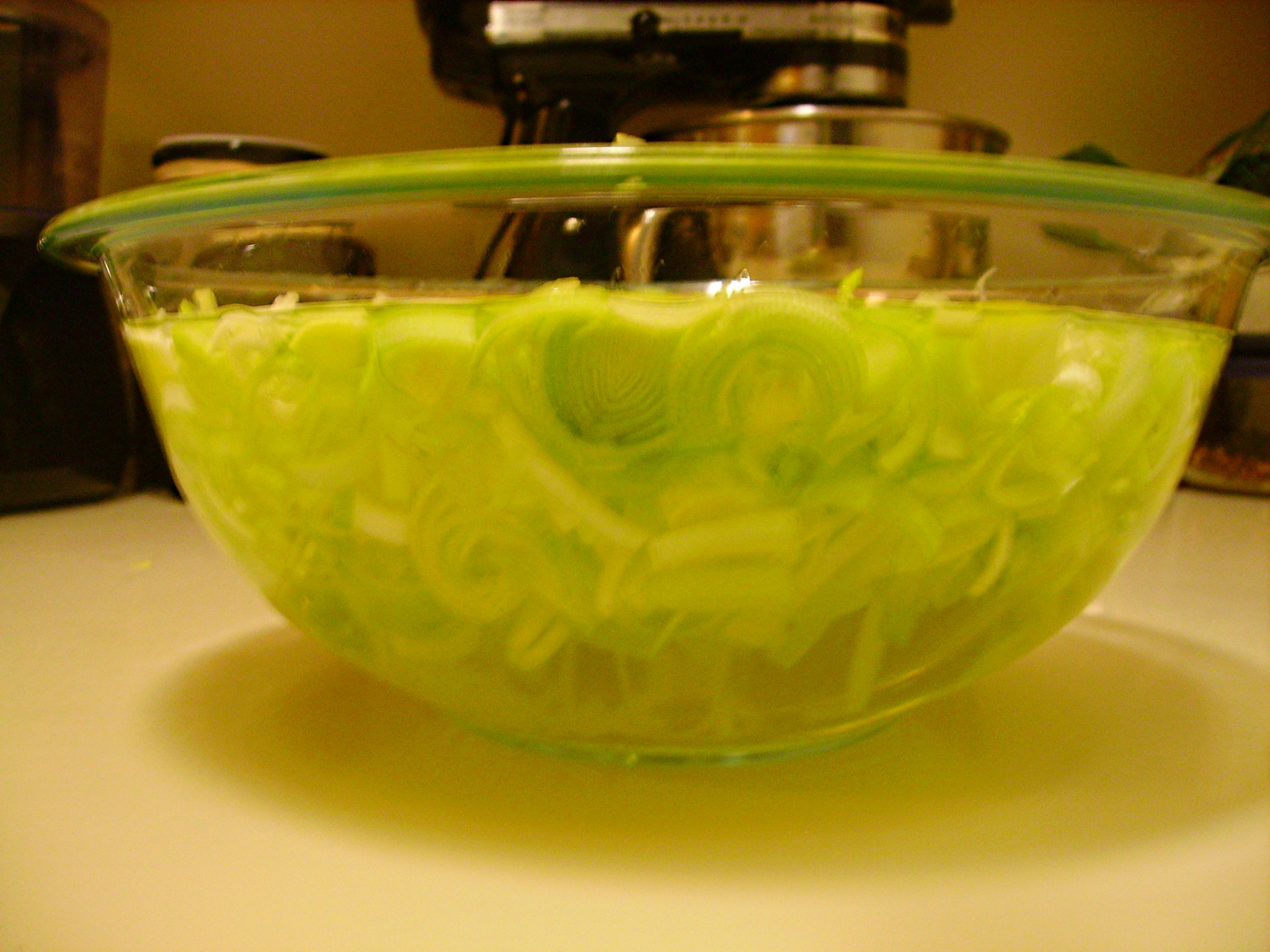 Meanwhile, chop up your leeks and drop them in a bowl of water. Swish them around with your hand. This loosens the dirt, which drops to the bottom of the bowl while the leeks float at the top. 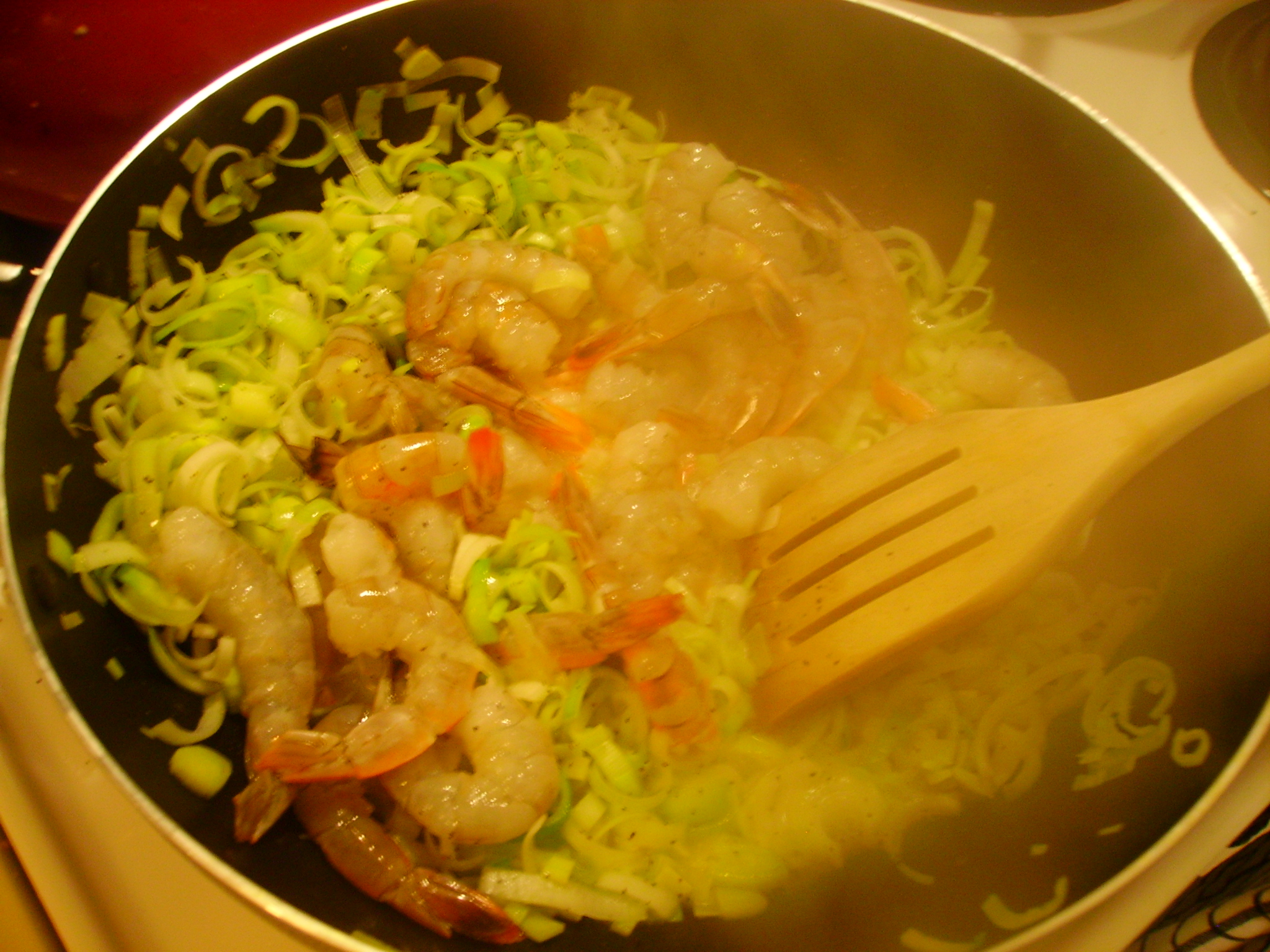 In a large sauté pan, heat up a small pat of butter. With a skimmer or a large slotted spoon, scoop the leeks out of the water and shake any excess liquid off, then dump them into the hot pan. Immediately add in the shrimp and lemon zest and season to taste. Stir the mixture frequently so the shrimp will cook evenly. 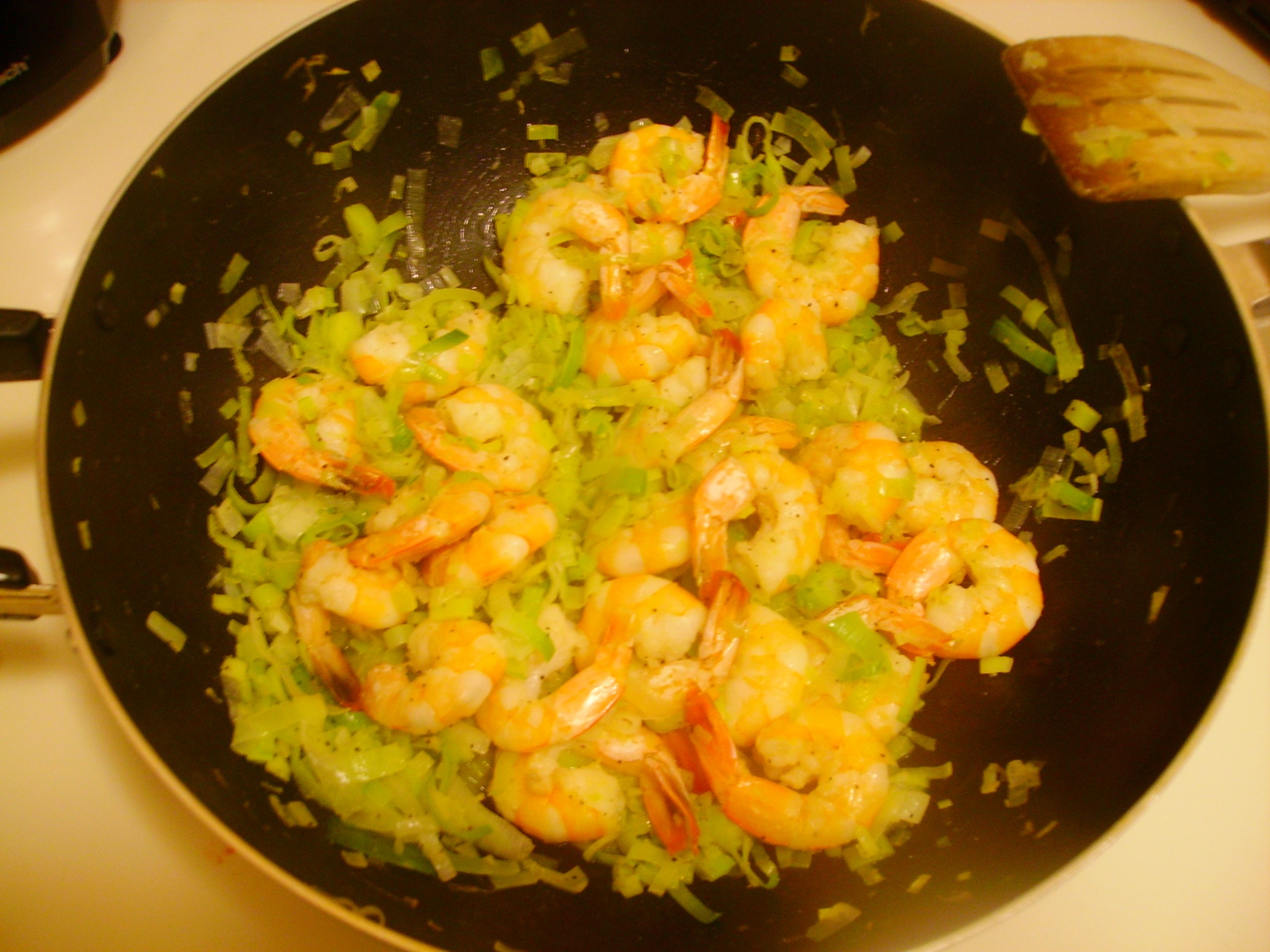 As soon as the shrimp are done (firm and completely opaque), remove the pan from the heat so they will not overcook. 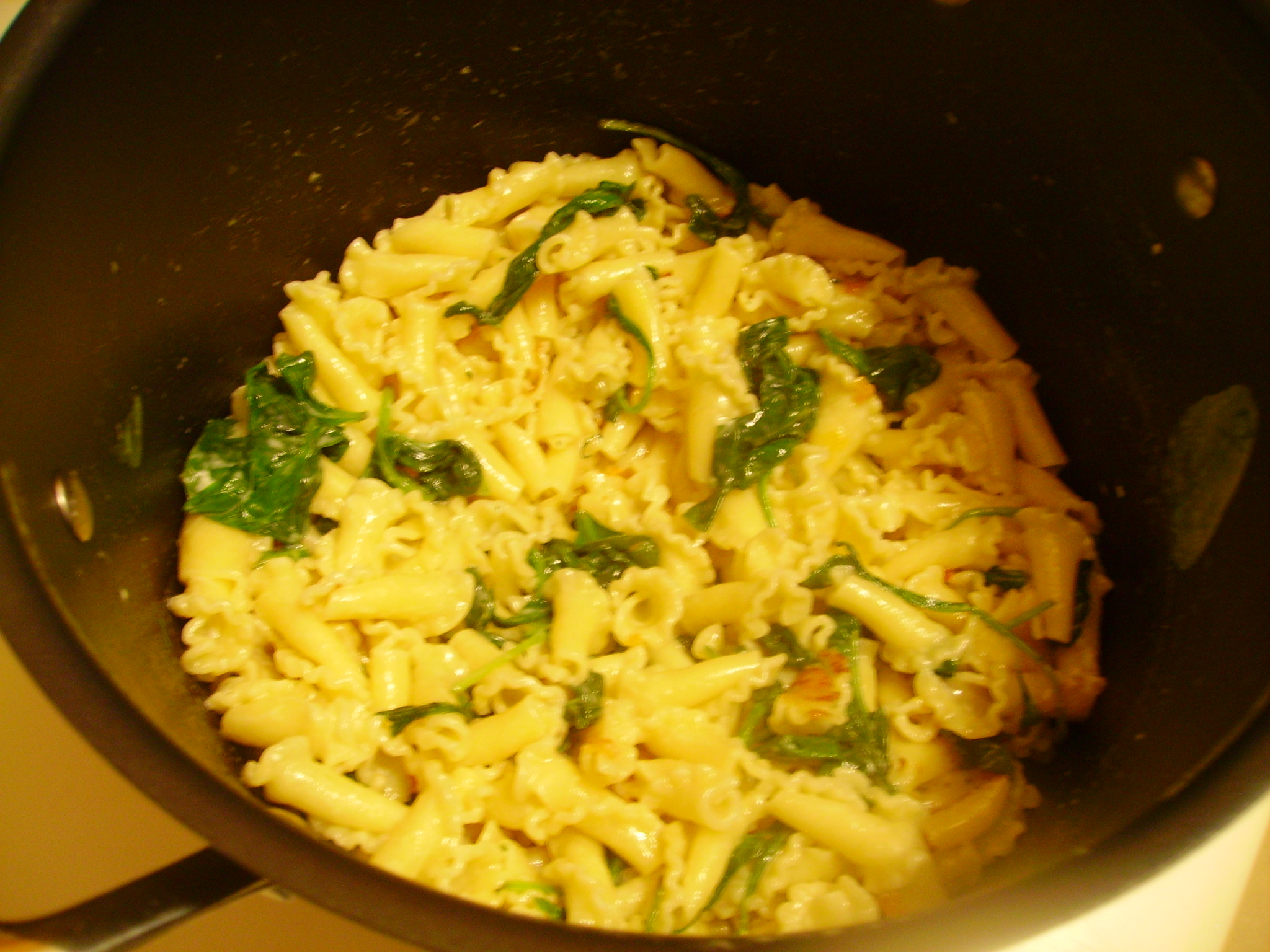 When the pasta has finished cooking, drain it and return it to the pot. Stir in the cream and feta cheese. As soon as the feta has melted, top the pasta with as much baby spinach as you want and cover the pot so the leaves will wilt. I recommend adding way more spinach than you think you want; I only had about 4 ounces on hand, which really looks like a lot before it cooks down, but I wished there was a greater spinach presence in the final product (this is reflected in the recipe below). 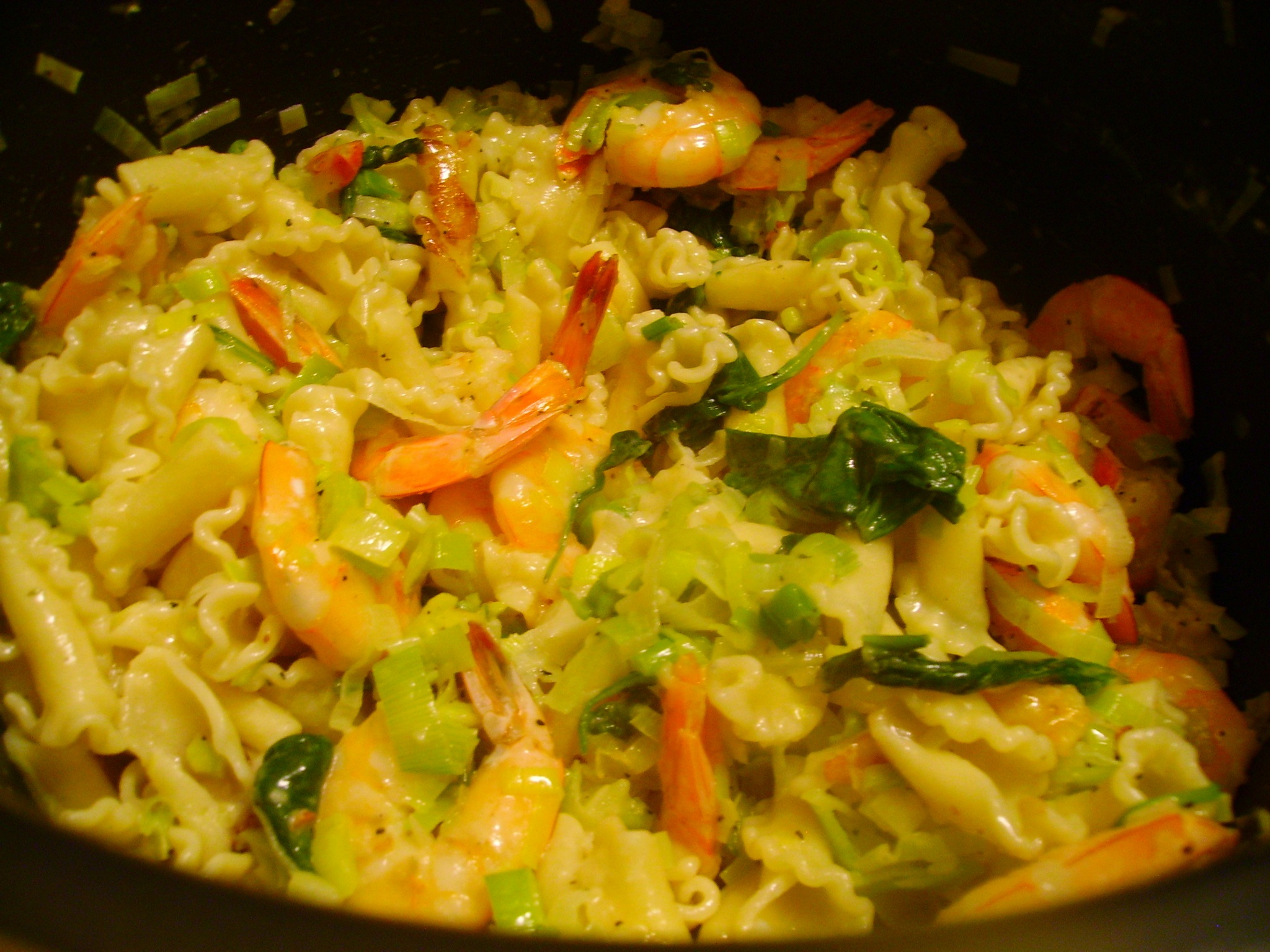 When the spinach has wilted, add the shrimp mixture into the pasta and stir until all the ingredients are well distributed. This pasta is best the day it was made, but if you can’t finish it all, you can store it in the fridge for up to 1 week.

Directions:
Cook the pasta according to the package directions.
Meanwhile, heat the butter in a large skillet over medium heat. Add the leeks, shrimp, and lemon zest. Season to taste. Cook, stirring occasionally, until the shrimp are completely opaque and the leeks soft, 3-5 minutes. Remove from heat.
When the pasta is cooked to al dente, drain and return it to the pot. Add the cream and feta and cook over medium heat, stirring, until the feta melts. Add the spinach; stir to incorporate, then cover the pot and let cook another 2–3 minutes, until the spinach is wilted.
Add the shrimp mixture to the pasta and toss to combine. Serve warm.

3 comments to “Shrimp and Leek Pasta”