Oh, pizza topped with asparagus, where have you been all my life?

I am so happy that we had a cool spring and the asparagus season lasted a little longer! When my CSA box arrived with a tidy bundle of green and purple spears, I almost danced with joy.

This pizza is seriously delicious. It will convert even the most rigid of asparagus haters—especially if you are using fresh, in-season asparagus! Yum. 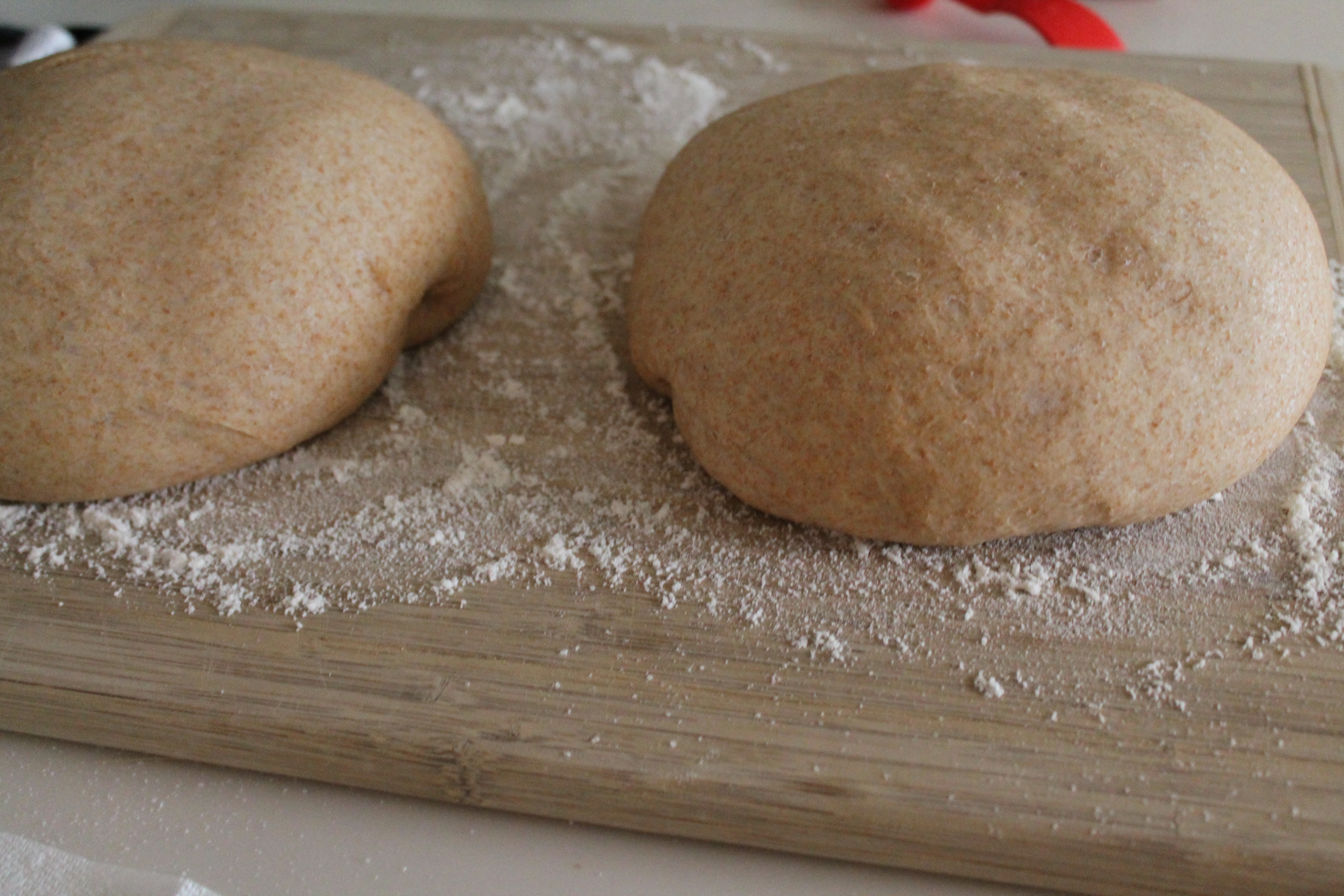 I made the pizza dough early in the day. I used this recipe, and then froze half of the dough for later. 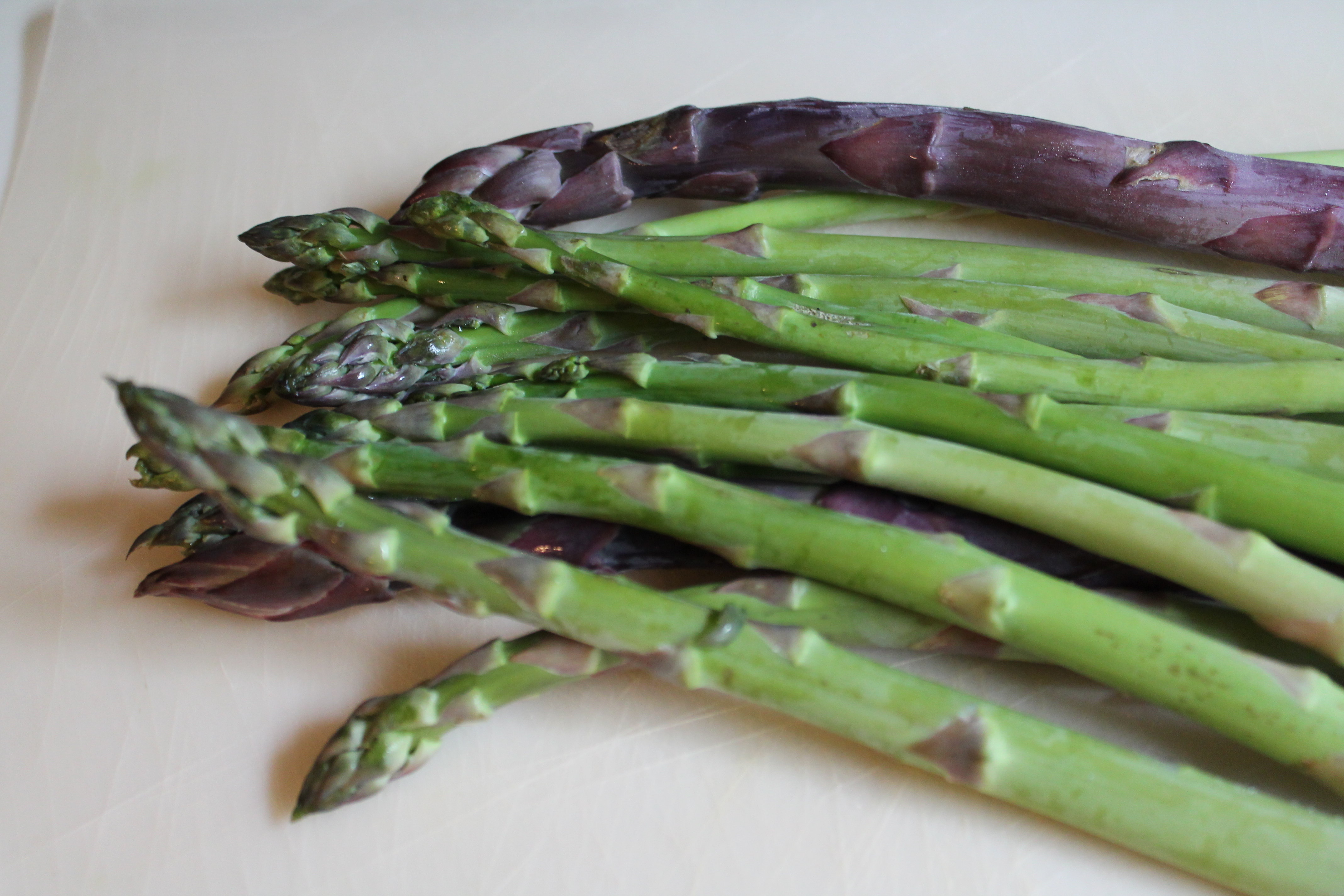 Thinner asparagus are really better for this recipe because they will cover the top of the pizza more evenly. I don’t recommend going for the super skinny, pencil-size stalks because you would be peeling all afternoon, but don’t pick the thicker, thumb-size asparagus either. 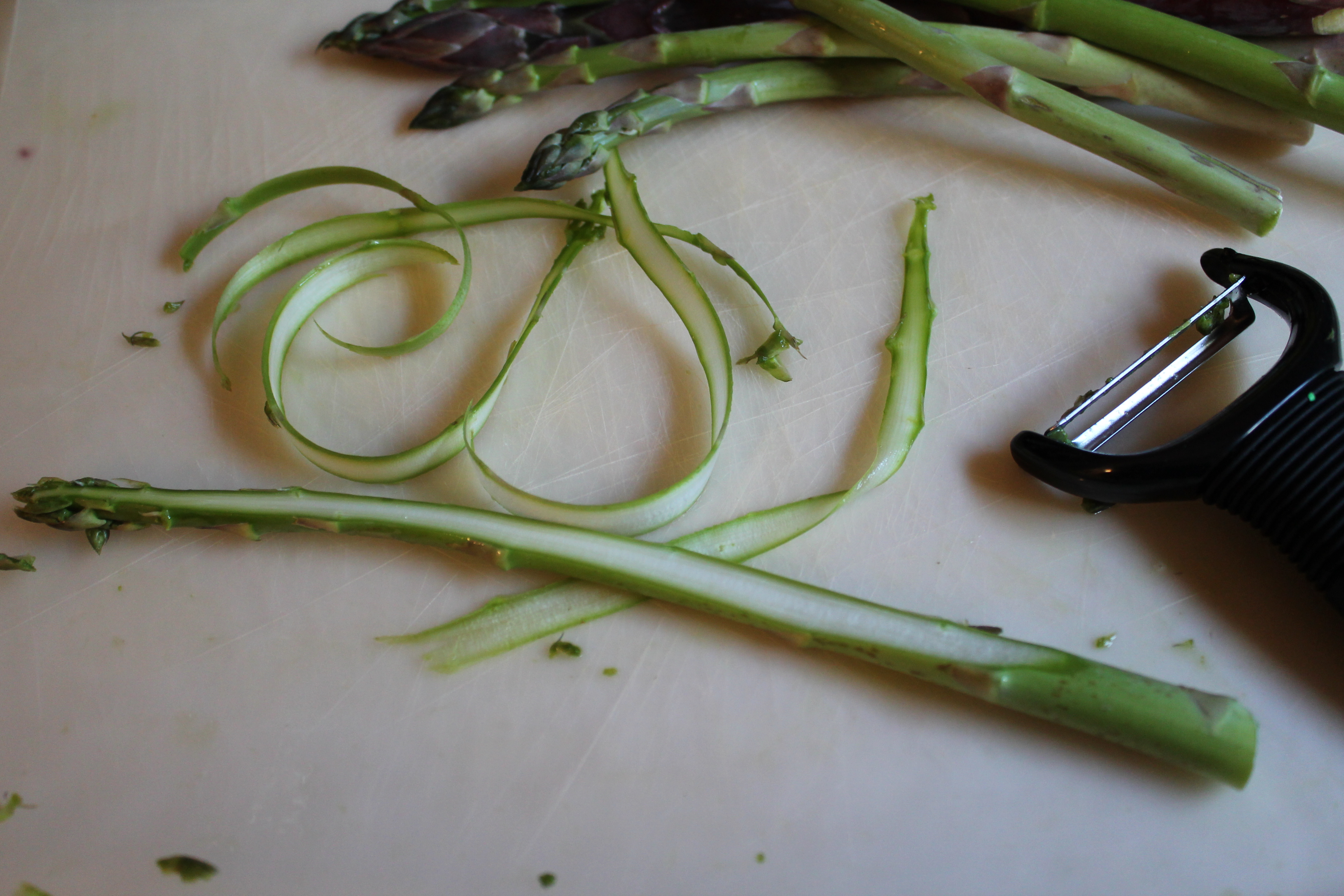 About 30 minutes before you want to bake your pizza, grab a Y-peeler and shave your asparagus. This is really easy, just like peeling a potato! You don’t need to break off the woody end of the asparagus, just use that as your grip so you don’t peel off your fingers or waste any edible veg. Peel thin ribbons off of each stalk, moving from bottom to top. Don’t worry if the asparagus head pops off…you can just toss that onto the pizza whole! 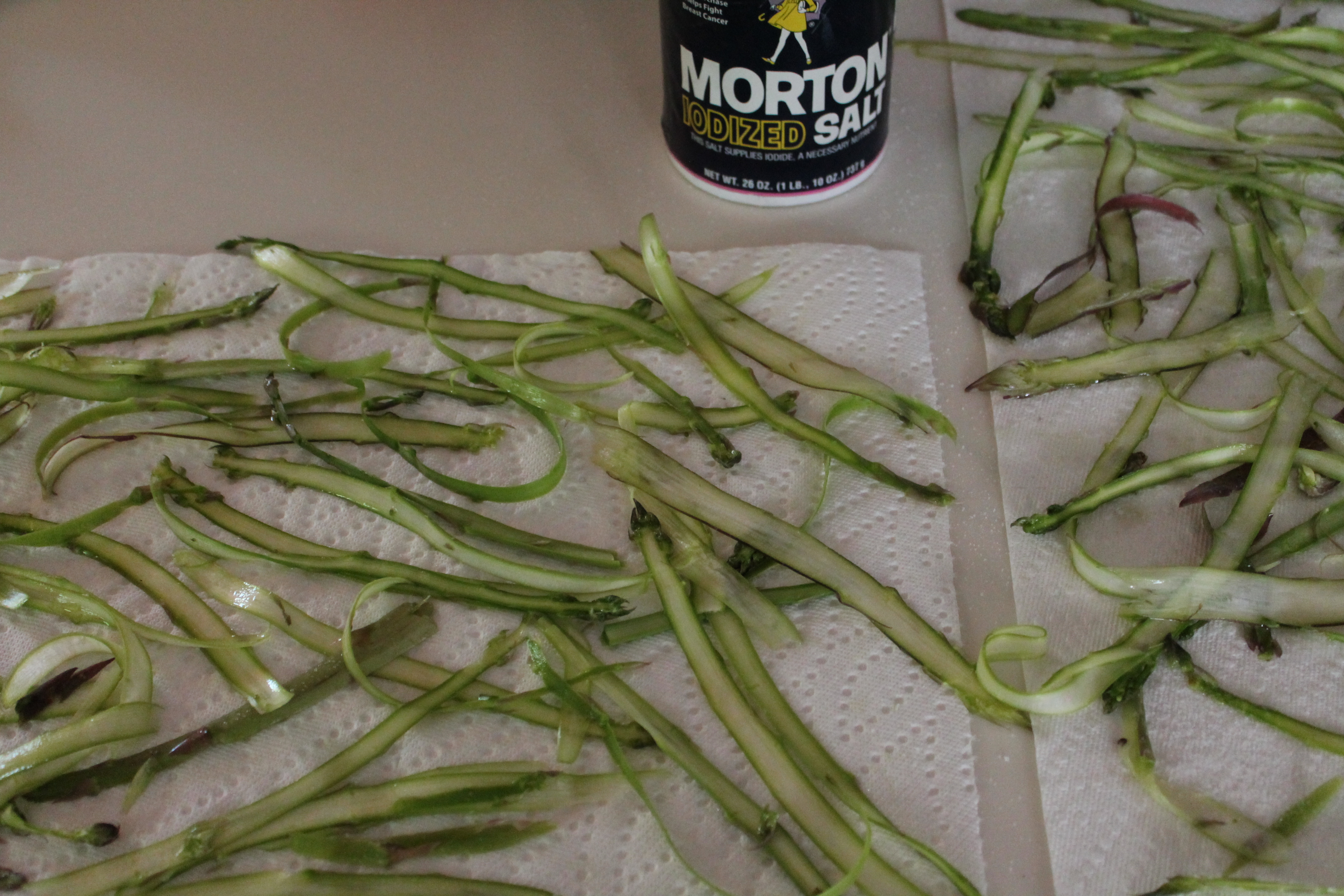 Assess your ribbons. If they seem really wet and juicy, you will want to salt them to release all that liquid. I learned this the hard way the first time I made shaved asparagus pizza. Basically, you want your pizza toppings to be fairly dry when they go into the oven, otherwise they will release all their liquid during cooking, and it will pool in the center of your pizza. This is kind of unsightly…and then you have to awkwardly mop up the liquid before you can serve the pizza. Trust me…just salt the asparagus! Lay them out as neatly as possible on some paper towels and lightly sprinkle with salt. Let them sit for 10 minutes or so, then grab another paper towel and press down to soak up the liquid released by the asparagus.

They will look and feel rather wilted instead of crisp at this point. And it will be slightly harder to arrange them artistically across your pizza. But, you will thank me later, when your pizza comes out of the oven looking and smelling like a dream! 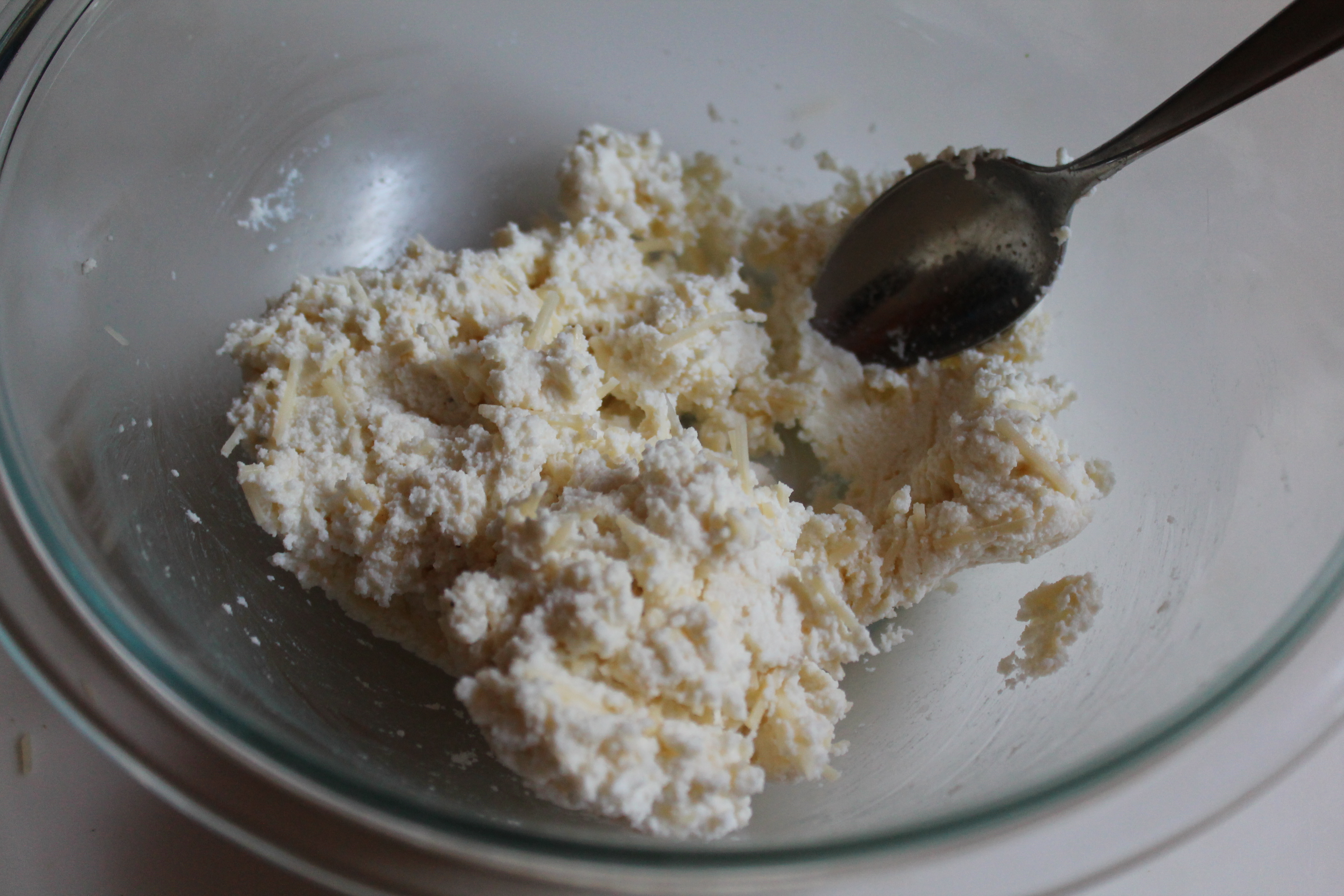 While the asparagus sweats, stir together ricotta, parmesan, and a minced clove of garlic. Season lightly with salt and pepper (be careful with the salt, as the cheese is already salty!). 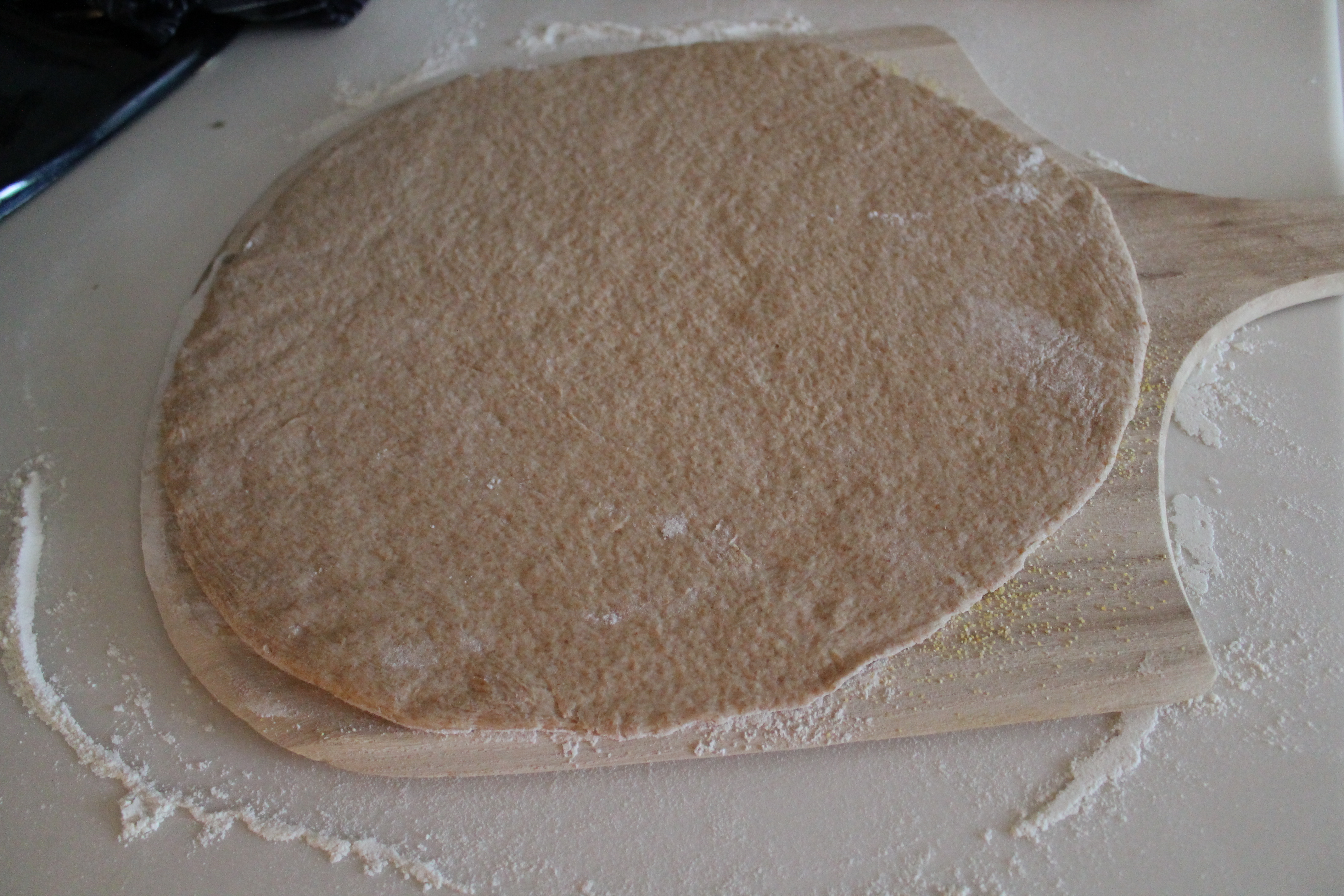 Now we are almost done! Heat your oven to 425°. Grab your essential pizza tools: a baking stone and a pizza peel. Don’t freak out if you don’t have those; you can still make pizza! You do need some kind of baking sheet, and your crust will be crispier on the bottom if your baking sheet is hot before you slide the crust into the oven. So place your baking stone into the oven to preheat.

Roll out the crust into a large circle, between 12″ and 14″ in diameter. I like to drape the crust over my fists and work it a little, letting gravity help pull it into a more even circle. This may seem scary, but it’s not too likely your crust will rip (unless you forget to take your rings off), and if worst comes to worst you can always ball it up and roll it out again!

Set the crust on a cornmeal-covered pizza peel (if you have one…if not, then just grab your heated stone or baking sheet out of the oven quick as you can). Gently slide your crust off the pizza peel and onto the heated stone inside the oven (or just set your crust onto the hot baking sheet and pop it back in the oven quickly). You don’t need to be too vigorous with your motions; thanks to the cornmeal, the crust should slide pretty easily off the pizza peel. Think of it as tipping and placing the crust on the stone. 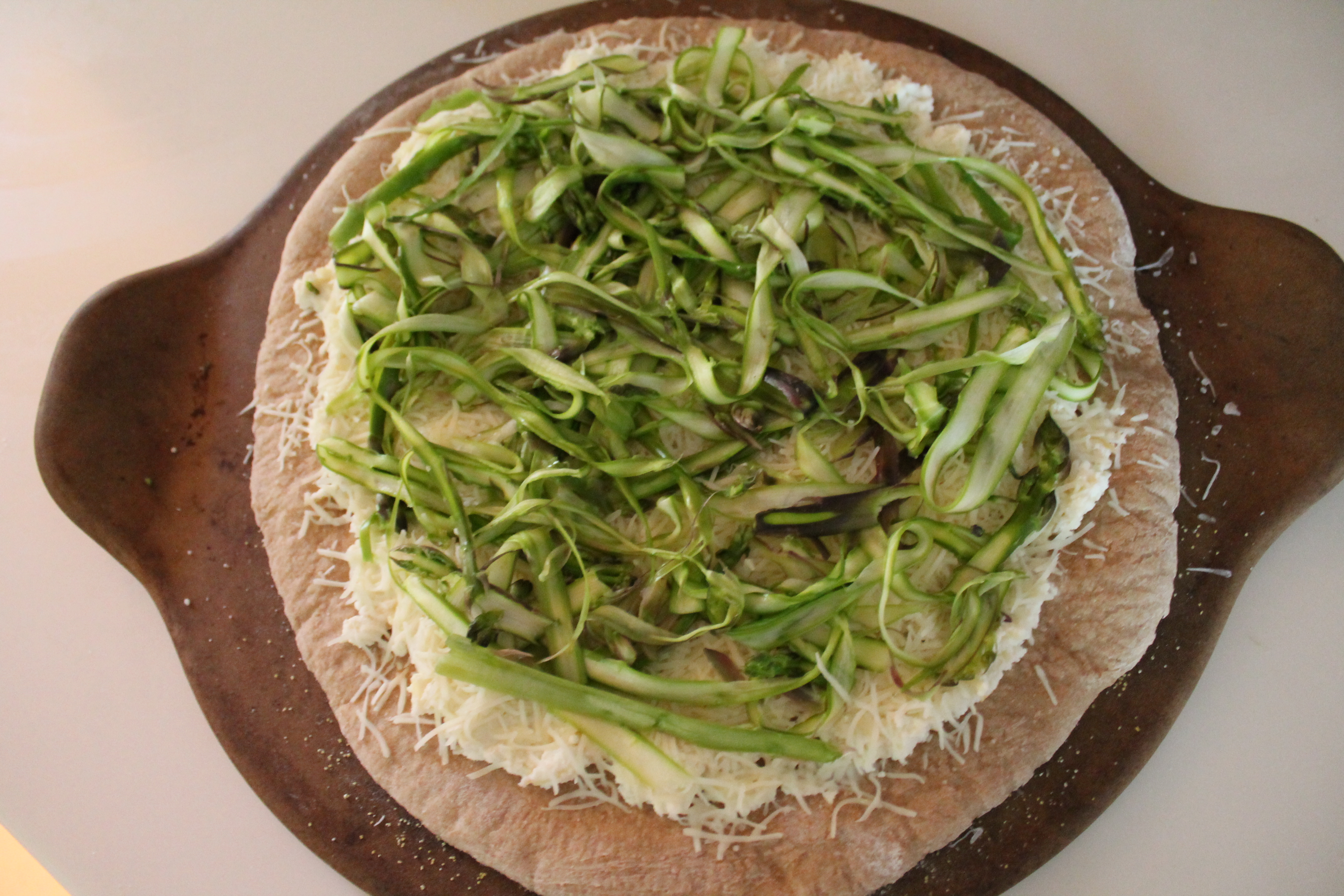 Arrange the shaved asparagus over the cheese. 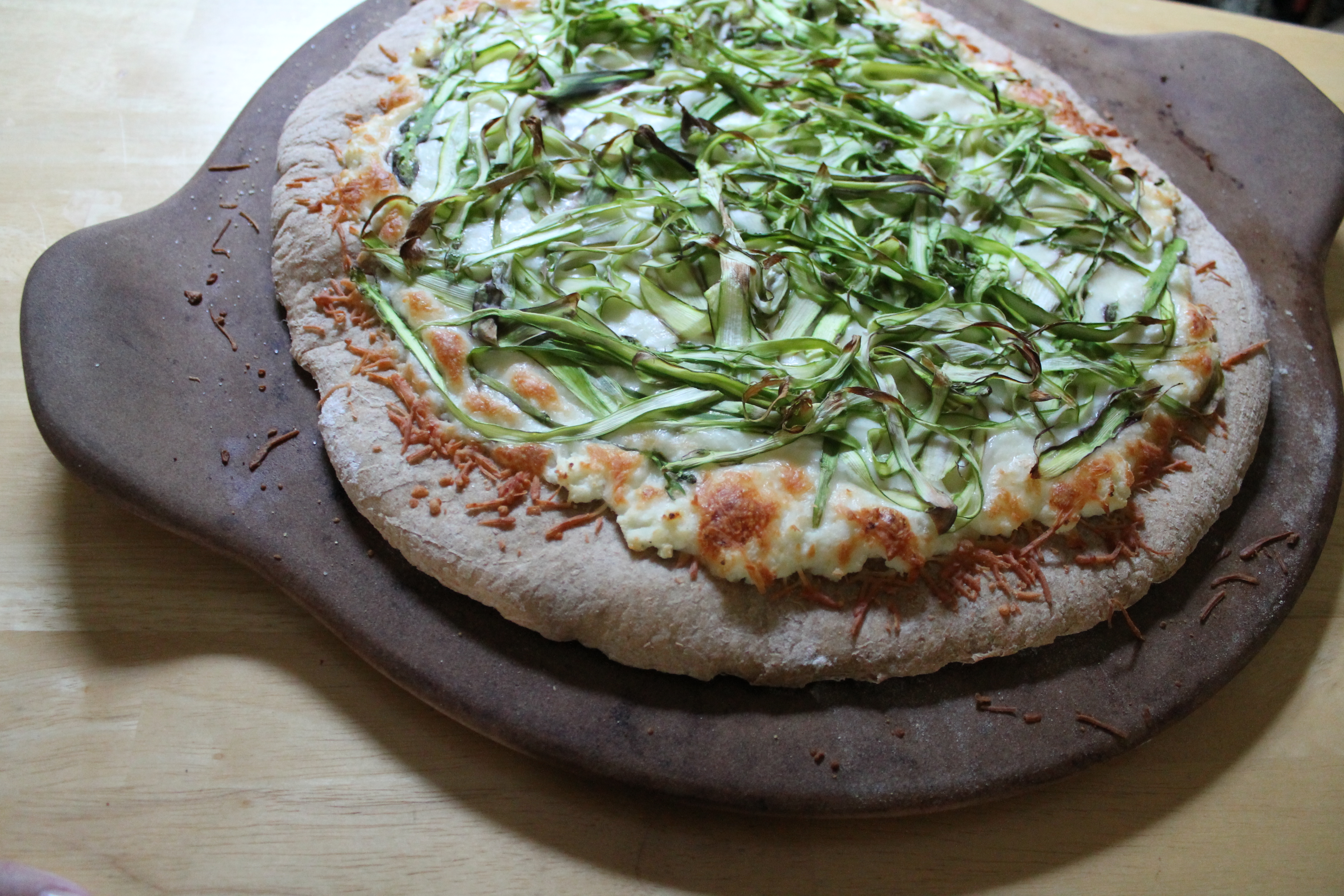 Pop the pizza back in the oven for 12–15 minutes, until the cheese is golden around the edges and bubbly all over. 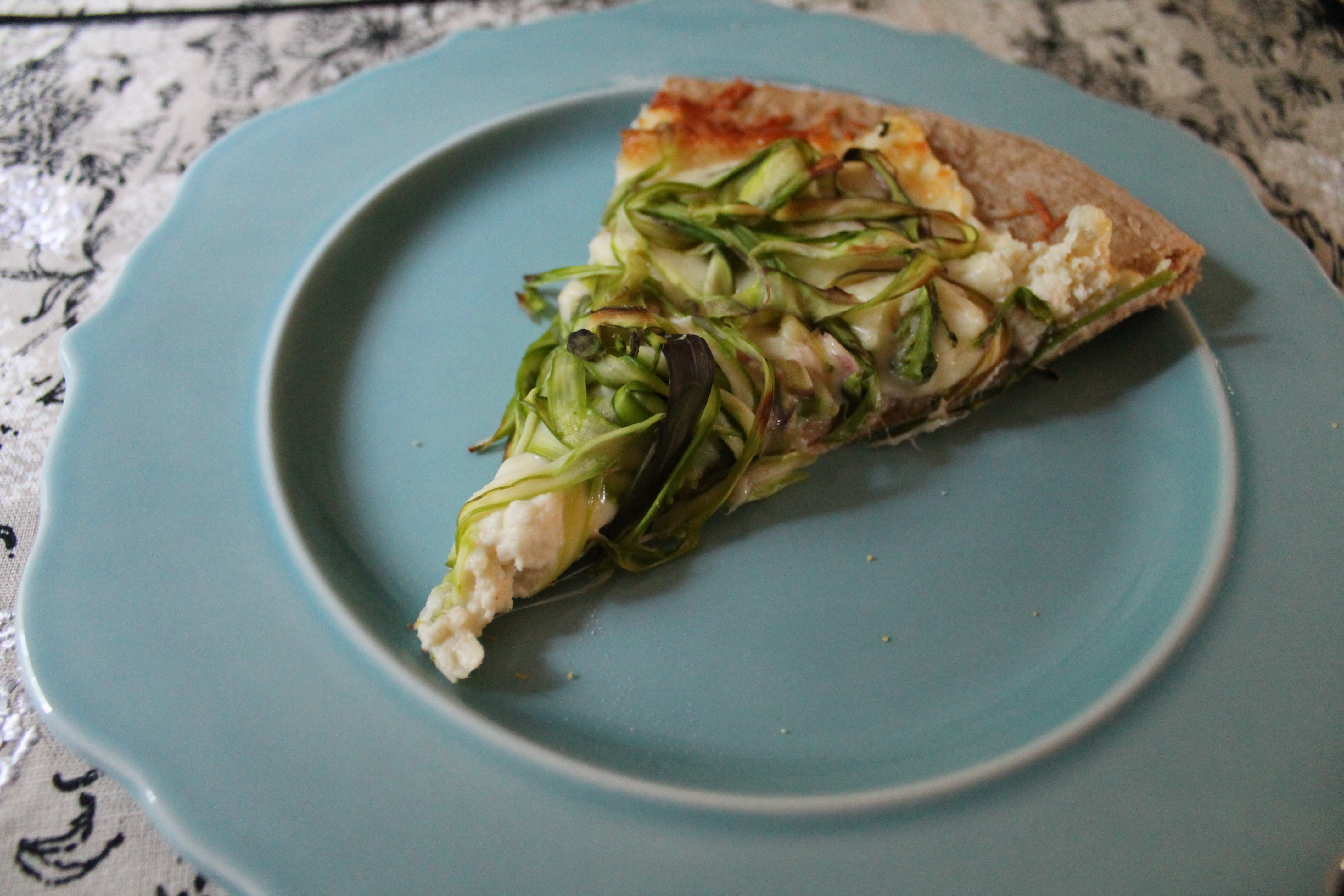 Serve with olive oil for drizzling and crushed red pepper for sprinkling. Mmm!

Directions:
Prepare the pizza dough according to the recipe directions.
While it rises for the second time, shave the asparagus into ribbons. If the asparagus is very fresh, it might be too moist to put onto the pizza directly. Lay the ribbons out on several paper towels and salt them lightly. Let the ribbons sweat for 10 minutes, then blot firmly with a paper towel.
Mix together the ricotta, parmesan, and garlic. Season with salt and pepper.
Heat the oven to 425°. Set a baking stone in the oven to heat.
Roll out the pizza dough into a large, round crust. Sprinkle cornmeal over a pizza peel and transfer crust to the peel. Gently slide the crust off the pizza peel onto the hot stone inside the oven.
Bake crust for 5 minutes.
Pull the crust out of the oven. Working quickly, spread the ricotta mixture evenly over the surface of the crust, leaving a small edge around the outsides. Top with as much mozzarella as desired and a mound of asparagus ribbons.
Bake 12–15 minutes, or until cheese is bubbly and golden.