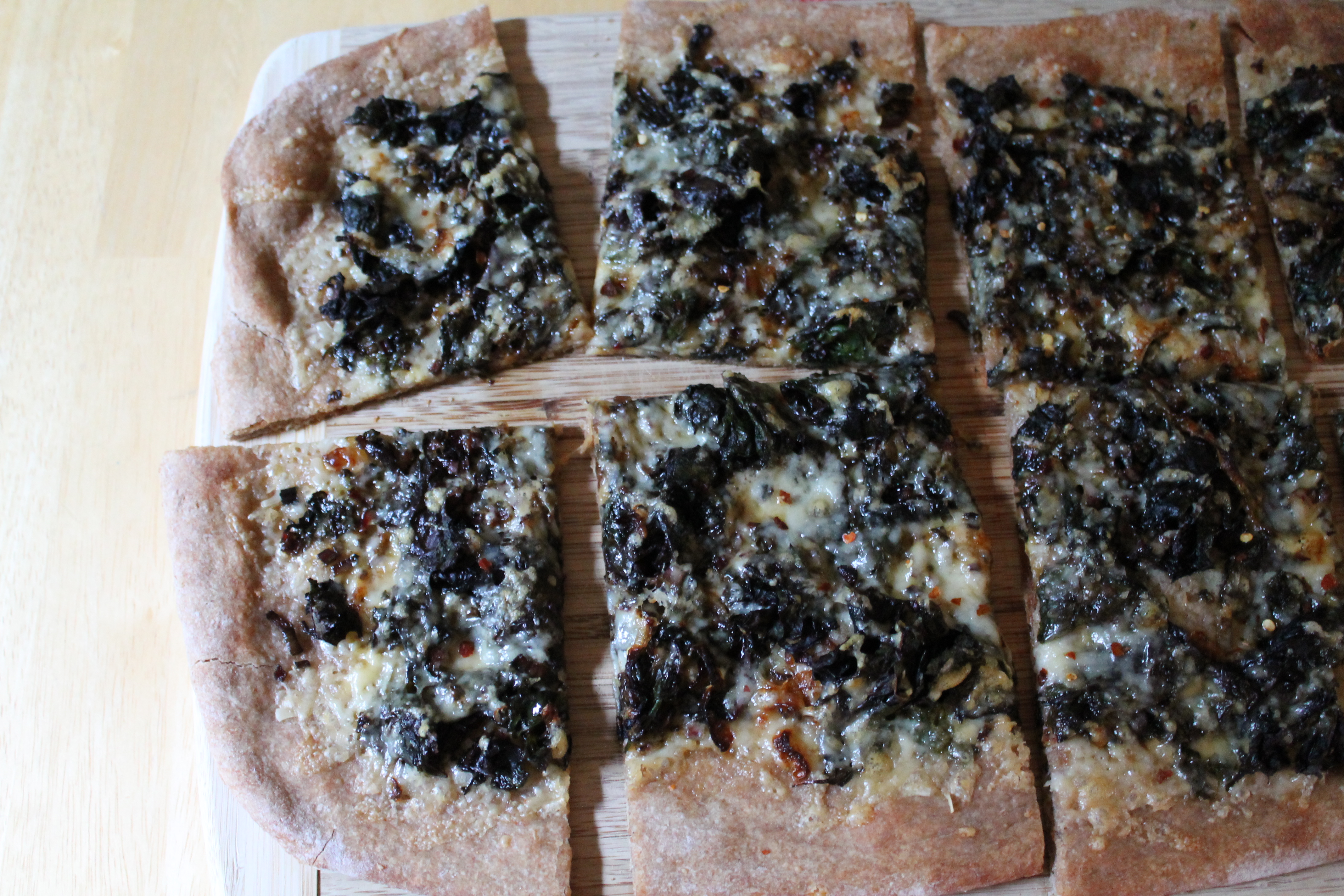 CSA week 8 brought some surprises! Swiss chard, for one. I thought that was just a spring treat, but here was a beautiful, purple-leaved bunch staring up at me!

This week’s box also contained four cukes (augh!), a pattypan squash, peaches, two heads of garlic, a baby dill plant, and about a pound and a half of green beans.

I quickly pondered my new bounty. Should I make a gratin? Pasta? Suddenly I knew that pizza was the way to go. And with a quick Google search, I was off!

This pizza takes patience, for sure. Caramelizing onions takes ages, and slicing all those chard stems? Forget about it. But the effort is so worth the end product! Swiss flavors on a crispy crust…what could be better?

First, you must prep your pizza dough. I used about half a pound of dough I had previously frozen from this recipe. You can use store-bought frozen dough if you must, but making your own pizza dough is very easy! Just make sure you give yourself enough time for the rise. Or, in my case today, the thaw. 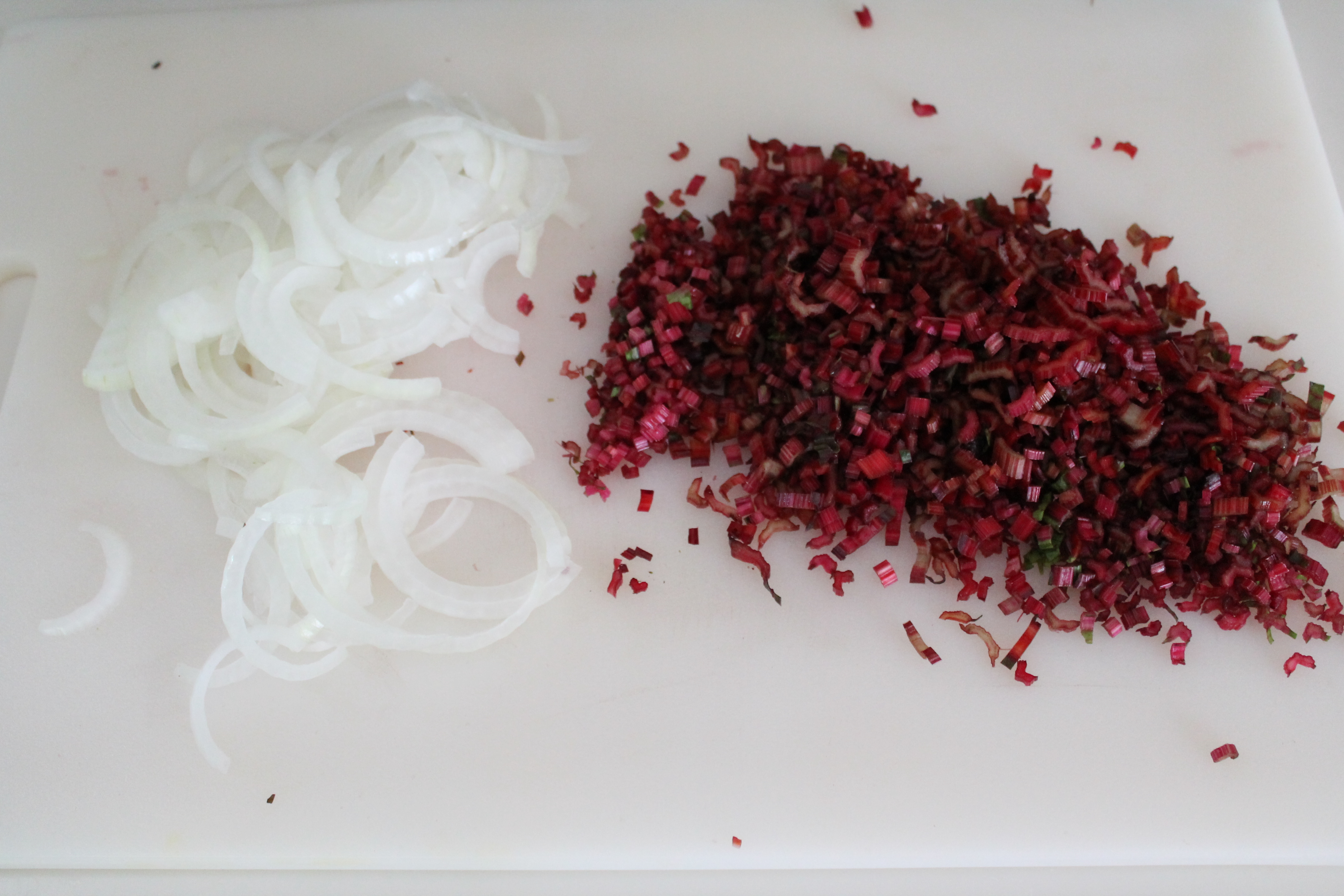 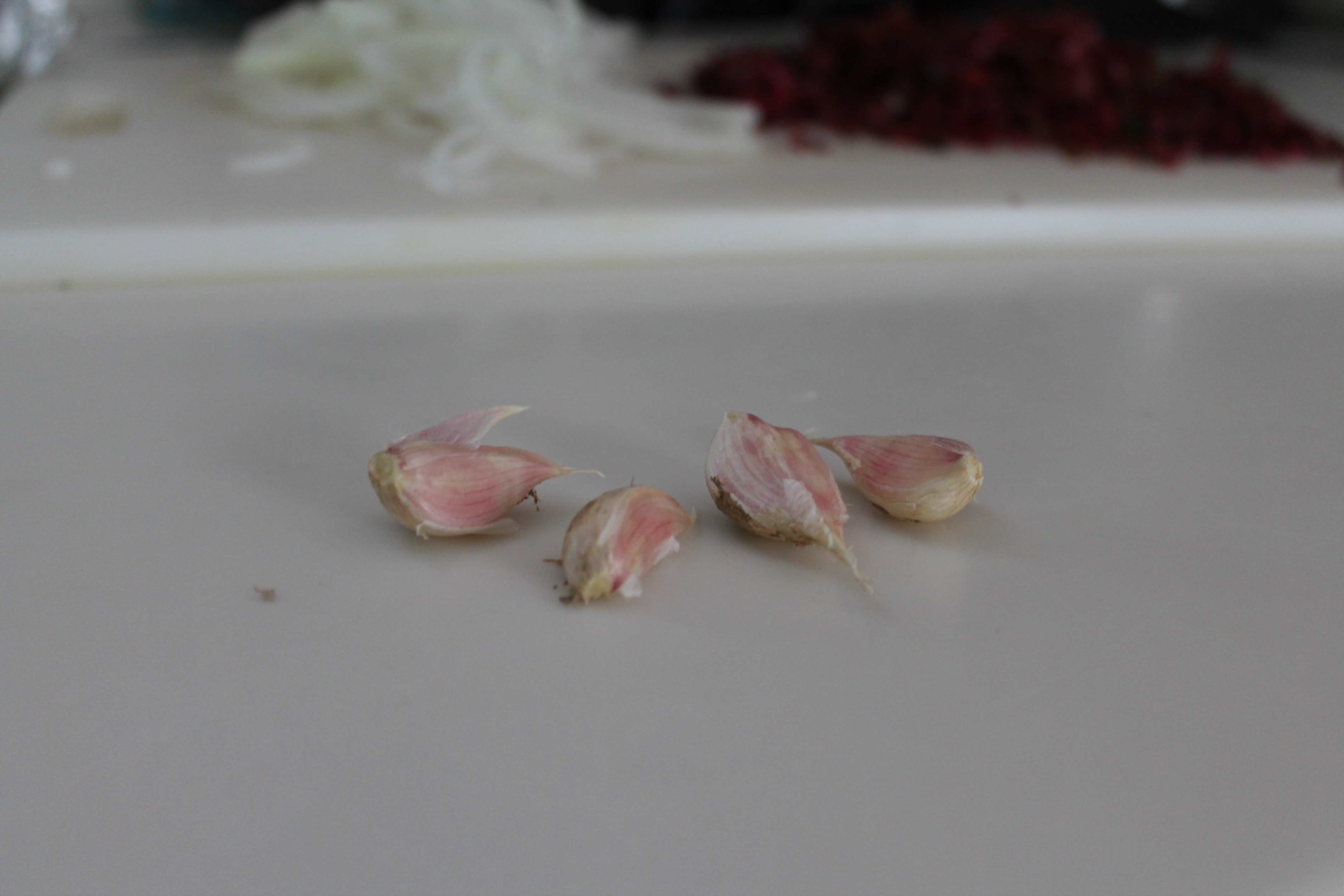 Halve the onion and very thinly slice it. Set the slices in a pan over medium-low heat with olive oil and minced garlic. I used 4 pinkish cloves from one of the bulbs I got in the CSA box! They were sweet and buttery, light on the harsh, tear-stinging bite of store garlic. Yum. 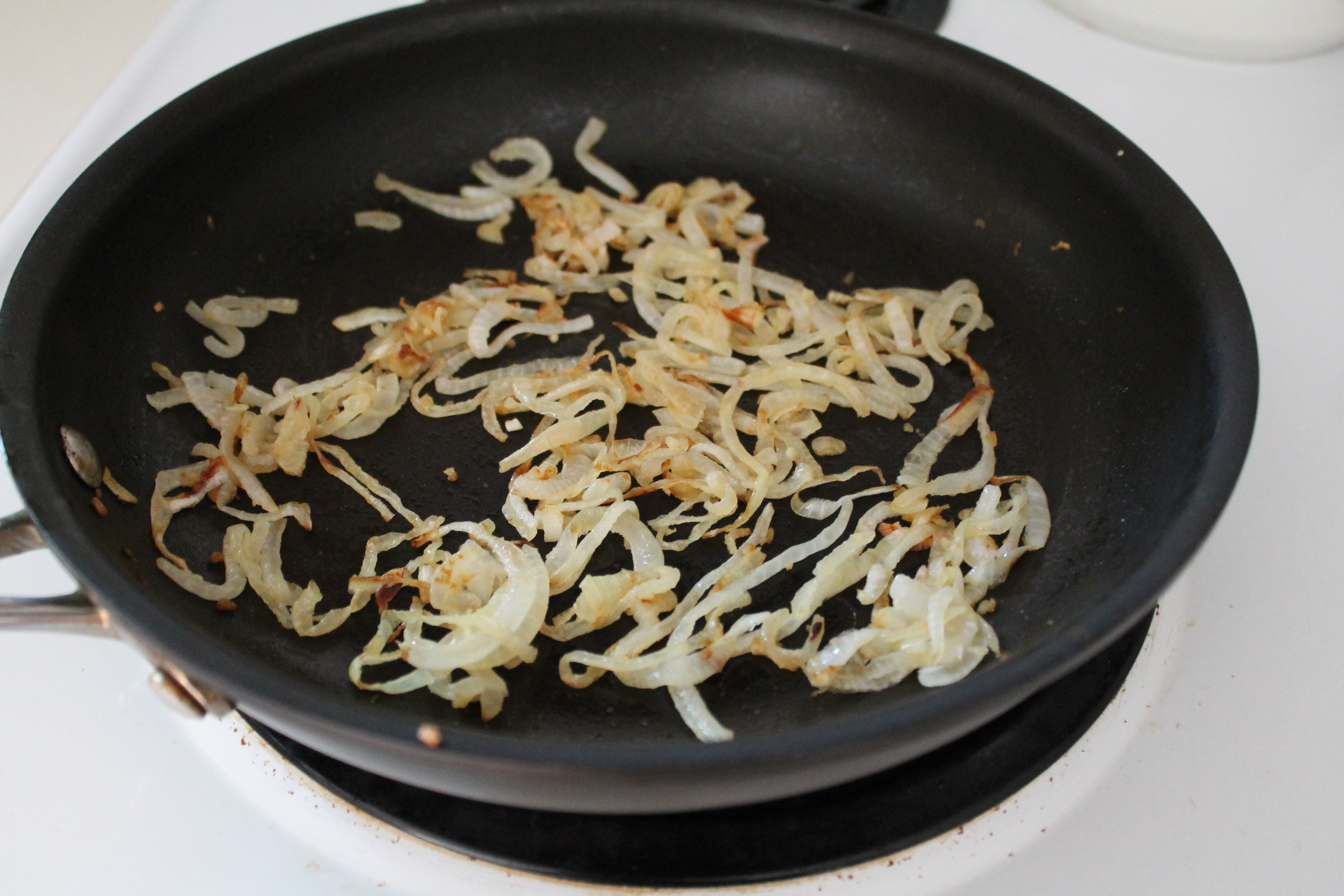 Turn the onions occasionally, slowly letting them develop a deep, golden color. This will probably take between 35–45 minutes. 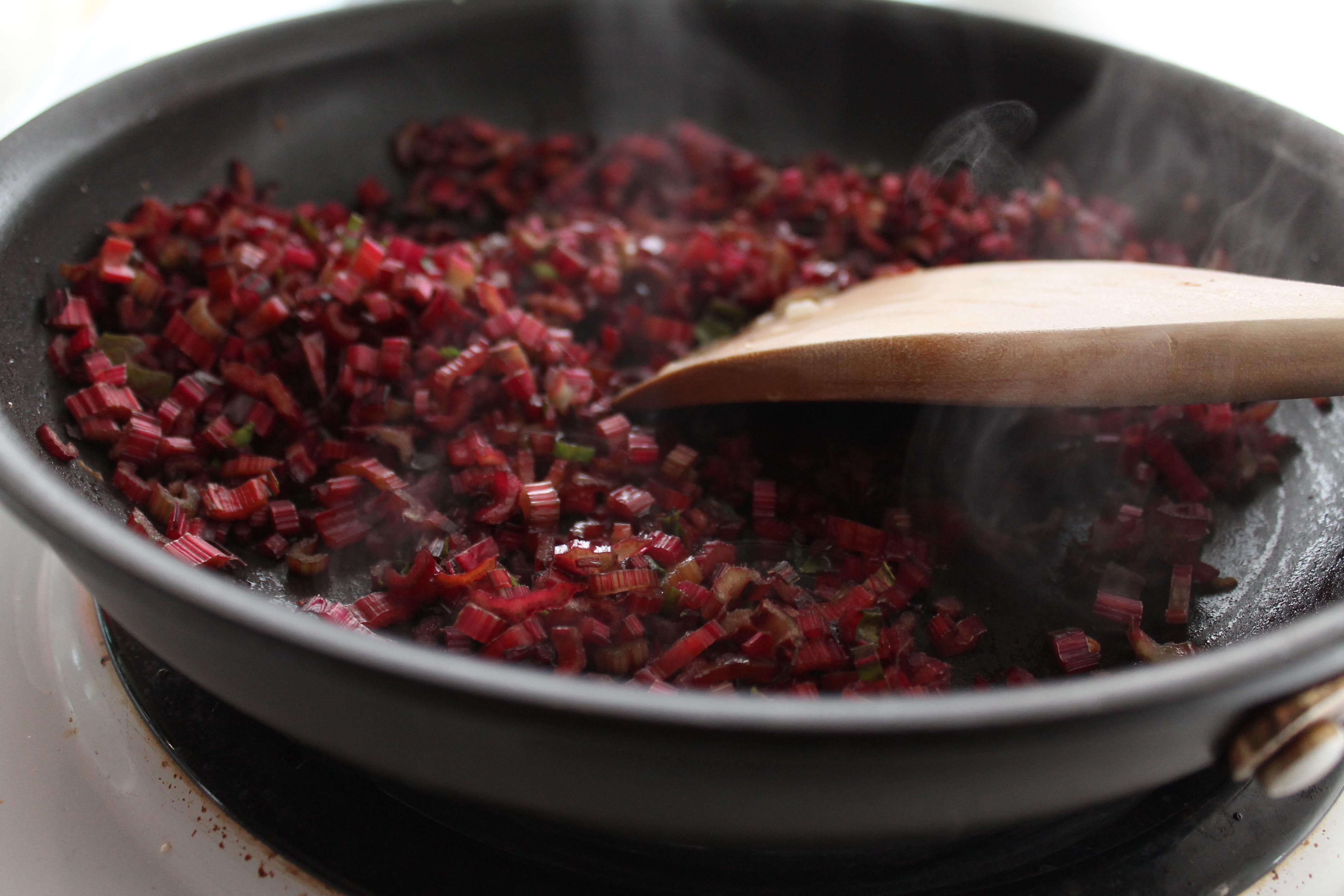 Meanwhile, remove the chard leaves from the stems. Thoroughly wash and dry the leaves and set them aside.

Thinly slice the chard stems. (Okay, I did all the chopping ahead of time, as Jake was happily playing with measuring cups on the floor, and I was a bit distracted…but chopping everything before starting the cooking ultimately made the whole meal take almost twice as long. Oops! Learn from my mistake.)

When the onions are a rich, golden brown, dump them out onto a plate to stop them from cooking any further. Toss the chard stems into the sauté pan with another drizzle of oil and cook about 5 minutes, stirring regularly, until soft. 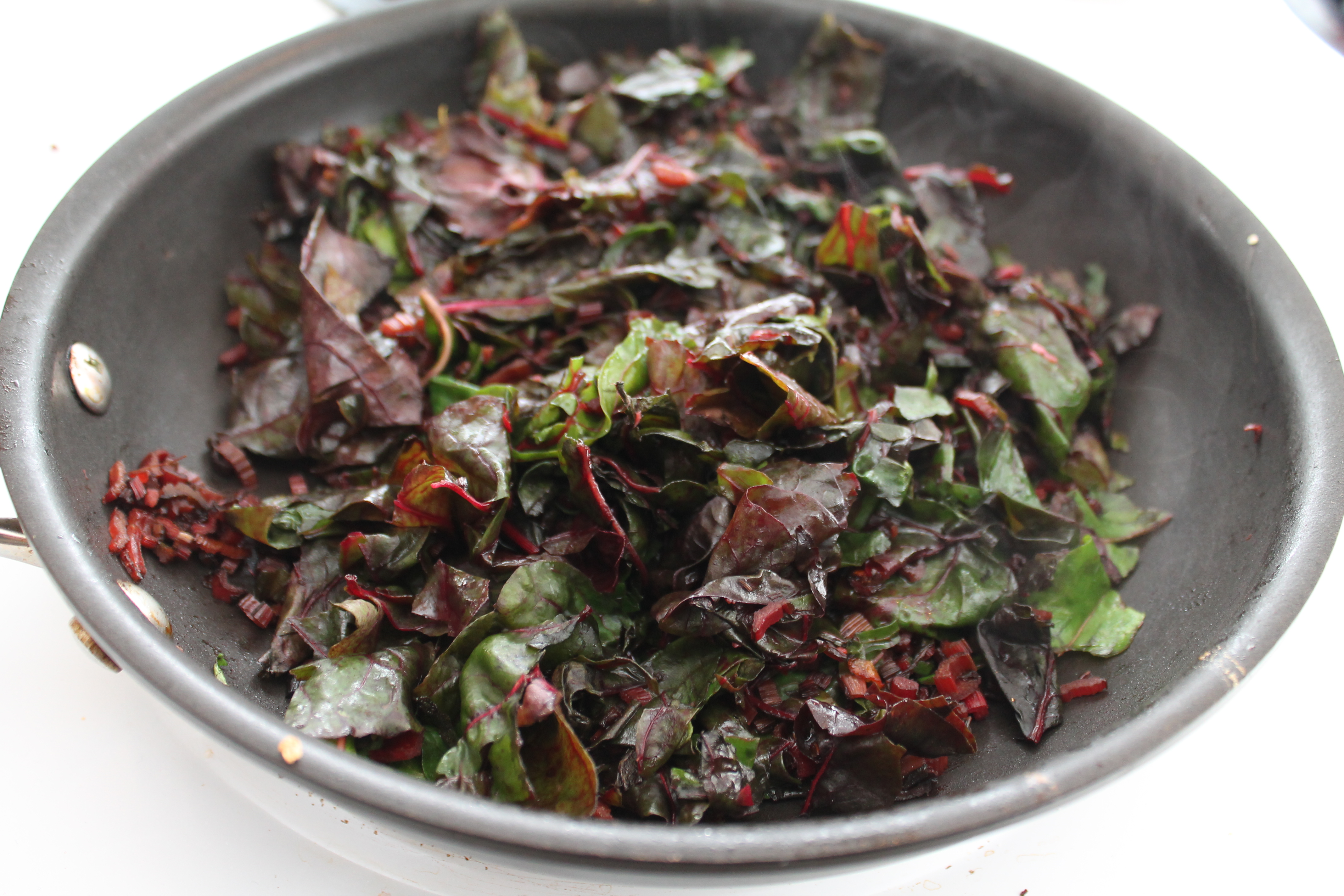 Roughly chop the chard leaves. Add them to the pot with the chard stems and let them wilt, turning regularly. As soon as the chard leaves are wilted to one half to one third their original volume, immediately remove them from the pan! Overcooked chard is gross. Don’t overcook it. 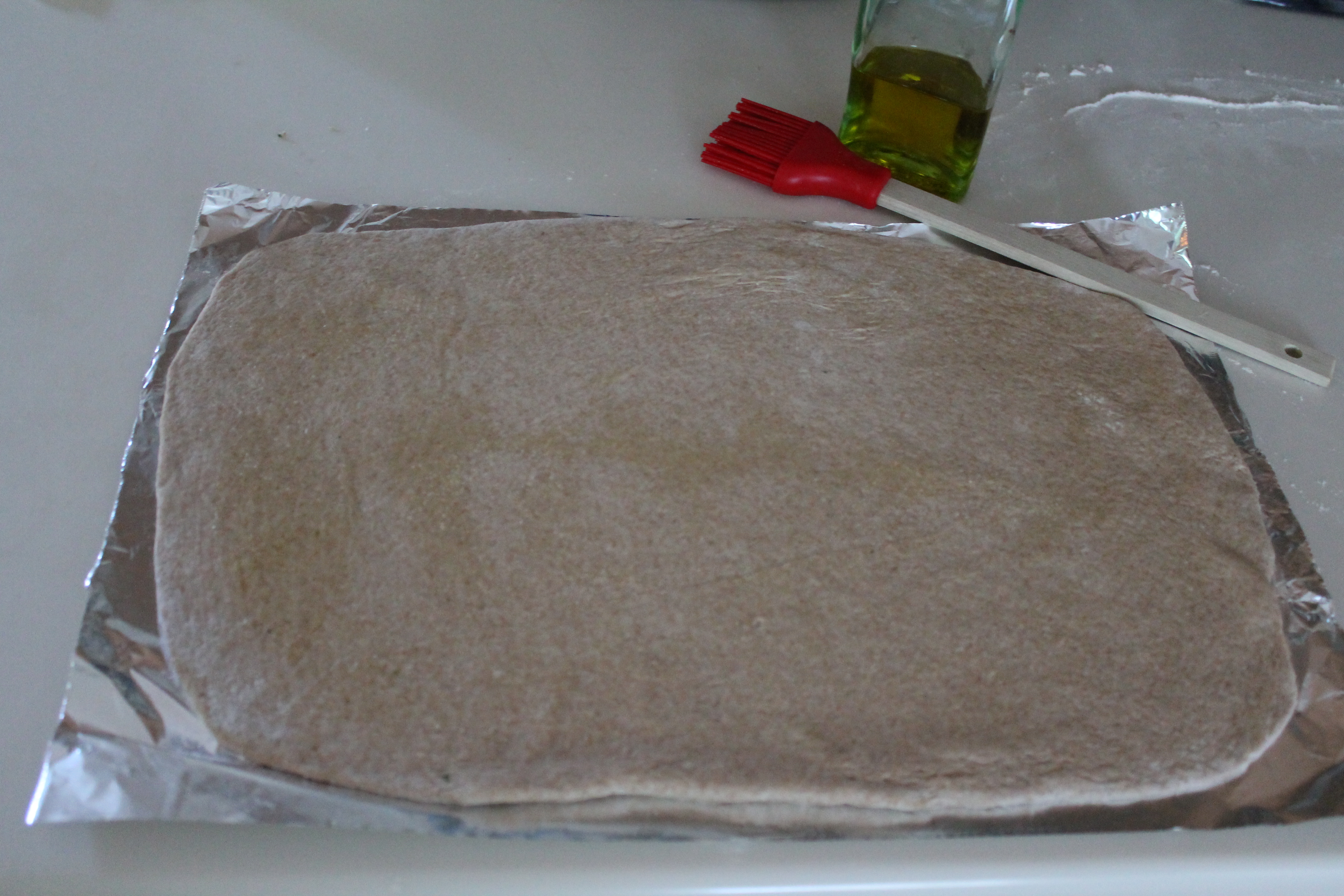 Now it’s time to assemble the pizza. Heat the oven to 500°. Set a rectangular baking stone or a large cookie sheet in the oven to heat. I don’t have such a stone, so I went the cookie sheet route. You could also make a circular pizza, but your crust will likely be a bit thicker, since it has a smaller surface area than the rectangle.

If you are making a rectangular pizza, roll the pizza dough out on a floured surface to about 10″x14″. Slide the dough onto a sheet of foil or parchment paper, which will aid in the transfer to the oven. 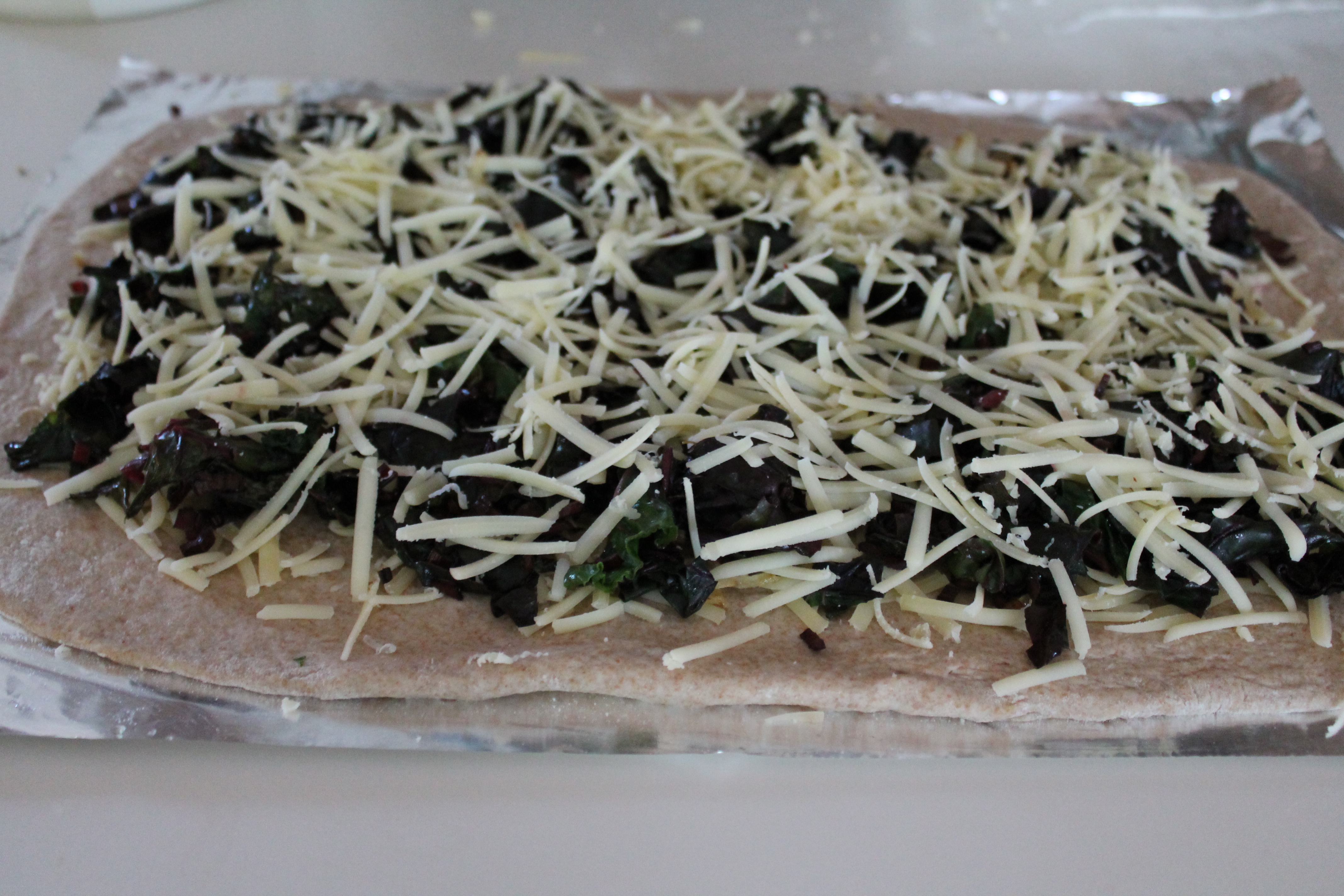 Grate 3 oz. Gruyere over the crust. Layer on the caramelized onions, followed by the chard, and another 3 oz. Gruyere.

If you are brave, lift the pizza and place it in the oven on the hot stone/cookie sheet. I used a pizza peel…not quite large enough, but easier than trying to hold the pizza evenly on a thin layer of foil, for sure! 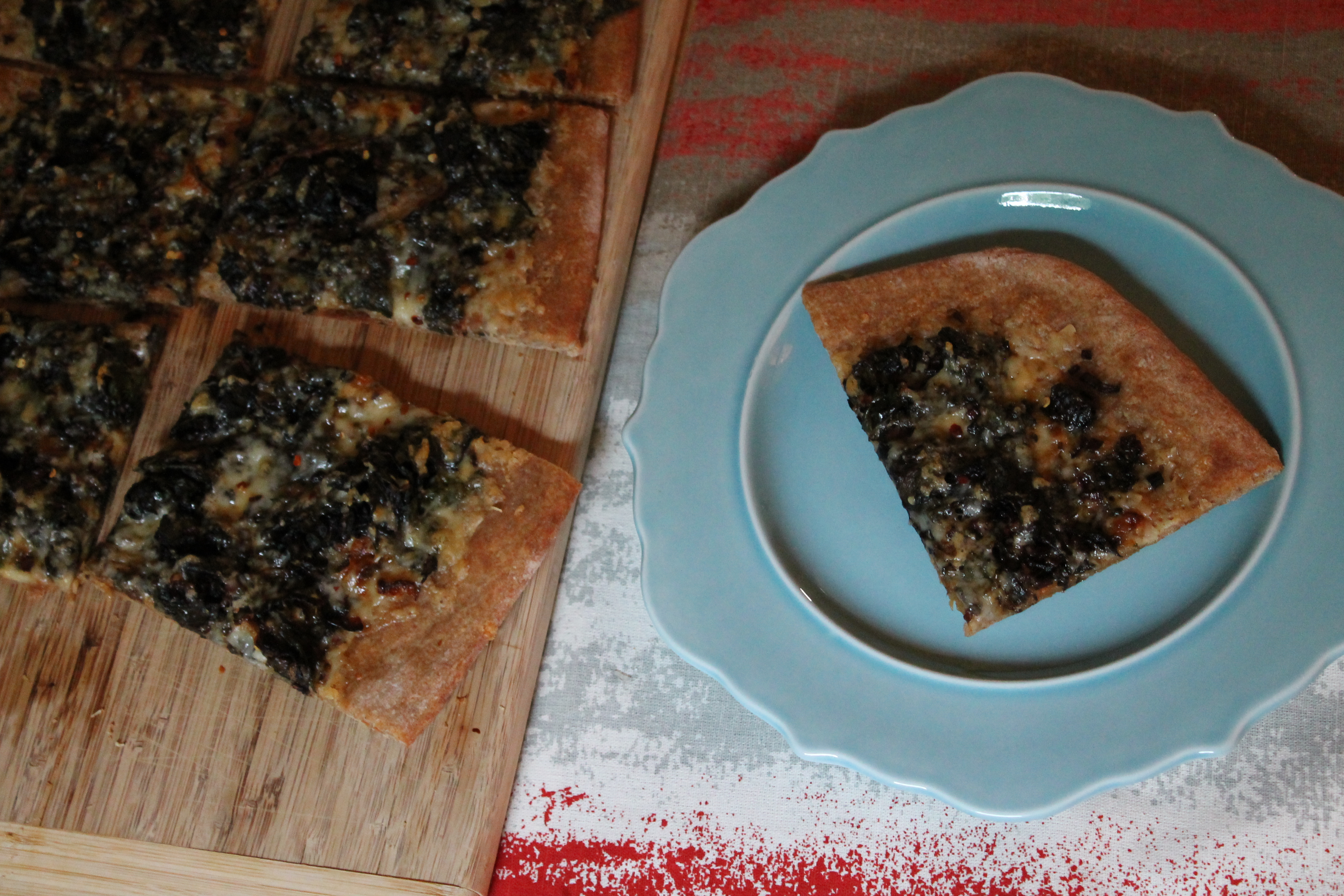 Bake the pizza for 13 minutes. Sprinkle with crushed red pepper and serve.

Directions:
Heat 1–2 tbsp. oil over medium-low heat. Add garlic to the pan and cook for 1 minute, until fragrant and lightly foaming. Add onions to the pan and reduce heat to low. Cook, stirring occasionally, for 45 minutes, until soft and golden brown.
Meanwhile, pull the chard stems from the leaves. Thinly slice the stems.
When the onions are done, lightly salt them, then remove them from the pan. Heat 1 tbsp. oil in the same pan over medium heat. Add the chopped stems to the pan and cook for 5 minutes, until tender.
Wash the chard leaves and roughly chop or tear them. Add them to the pan with the stems and toss together, cooking until chard is just wilted. Remove the chard from the pan to avoid overcooking.
Roll out the pizza dough to a large rectangle, about 10″x14″. Transfer the crust to a large sheet of parchment to aid transfer to the oven. Brush the crust with the remaining tbsp. olive oil. Layer on half the Gruyere, the onions, the chard, and the remaining Gruyere.
Transfer the pizza to the oven. Bake 13–15 minutes, until the cheese is golden and bubbly.
Sprinkle with red pepper flakes. Slice and serve hot.