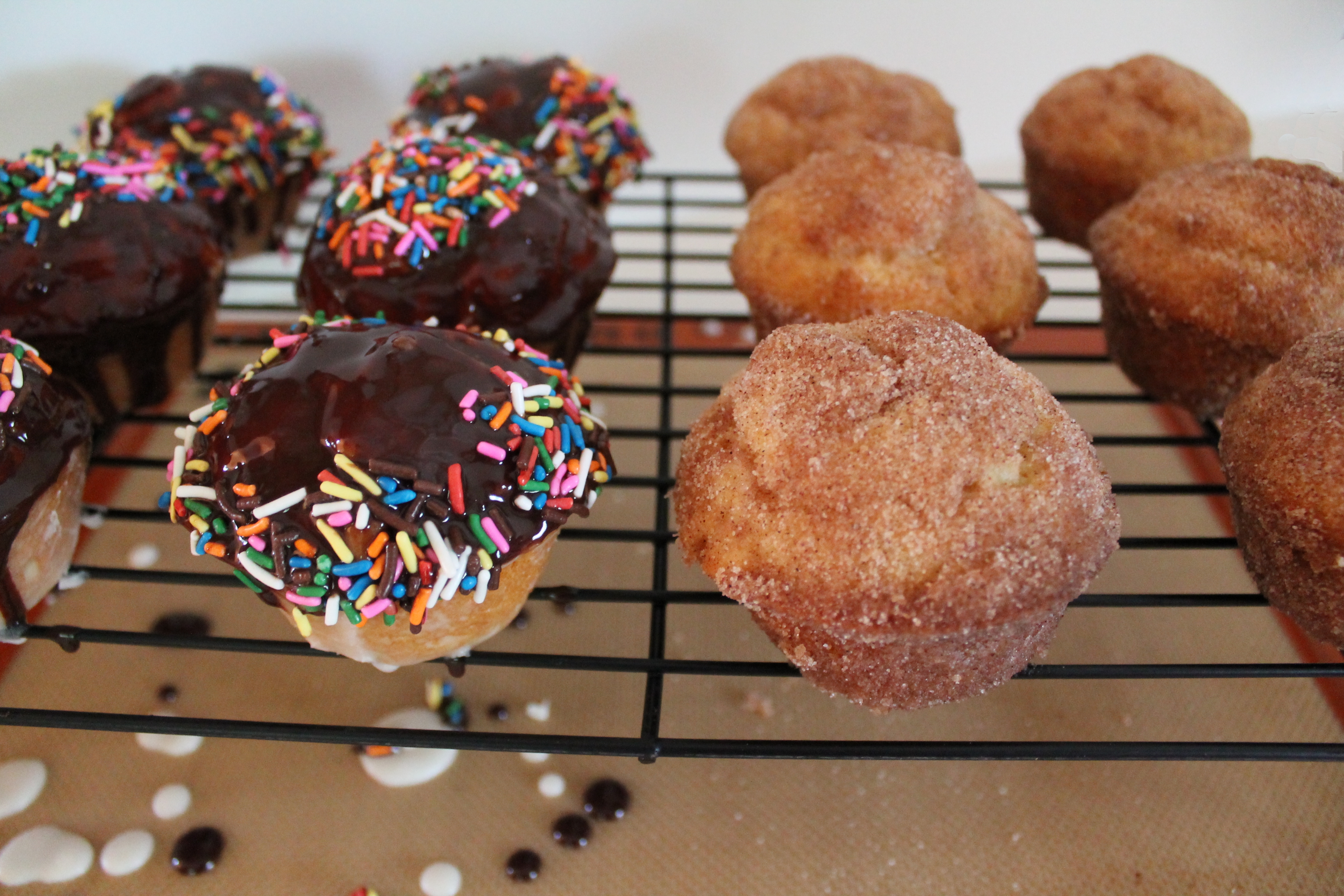 I have a confession to make.

Sure, when I was little, I could down a chocolate-creme-filled as well as the next kid. I loved me some powdered sugar, even when I accidentally inhaled it. And that sticky, gooey, sweet coating on a glazed donut made my heart go pitter-pat.

But some time in my teen years, I discovered the Krispie Kreme hot donut light. In fact, I went to school about a mile away from a Krispie Kreme shop, so I used to drive by regularly and snag a donut (or two…) whenever possible. But, um…those things are a gut bomb and a half! After a while, I literally couldn’t stomach them anymore; the mere idea of Krispie Kreme was enough to make me feel sick to my stomach. And ever since, donuts just haven’t been that appealing to me.

Hey, don’t judge me. I figure I eat so many other buttery, sugary foods that it’s really a blessing to have one I am not magnetically drawn to.

But recently, I think Dave has had donuts on the brain. When we were asked to bring a “decadent” dessert to a dinner with friends, his first suggestion was donuts.

I hemmed and hawed and then found a recipe for donut muffins on Secrets from the Cookie Princess, my Secret Recipe Club blog for September!

I made this recipe a few times, tweaking along the way. The first time I made them, I doubled the recipe but only got 23 muffins—and they were still quite a bit smaller than I typically prefer my muffins. I figured that pan size played a role (did you know that cupcake and muffin tins aren’t actually standardized? That’s right…different tins will yield different volume muffins!). I glanced at my copy of Pioneer Woman and found that her recipe for French Breakfast Puffs was nearly identical, but only yielded 12 muffins! So I made the donut muffins again with the doubled recipe, but I filled those muffin cups right to the very brim. I also used a totally different method, because I really had a yen for a muffin rather than a cake. The result was 12 truly enormous, delicious, dense, and moist muffins, which I then liberally covered in all kinds of sugary amazingness.

The cinnamon version tastes just like a cruller, and the chocolate-glazed-glazed (that’s right, two glazes) version is divine! 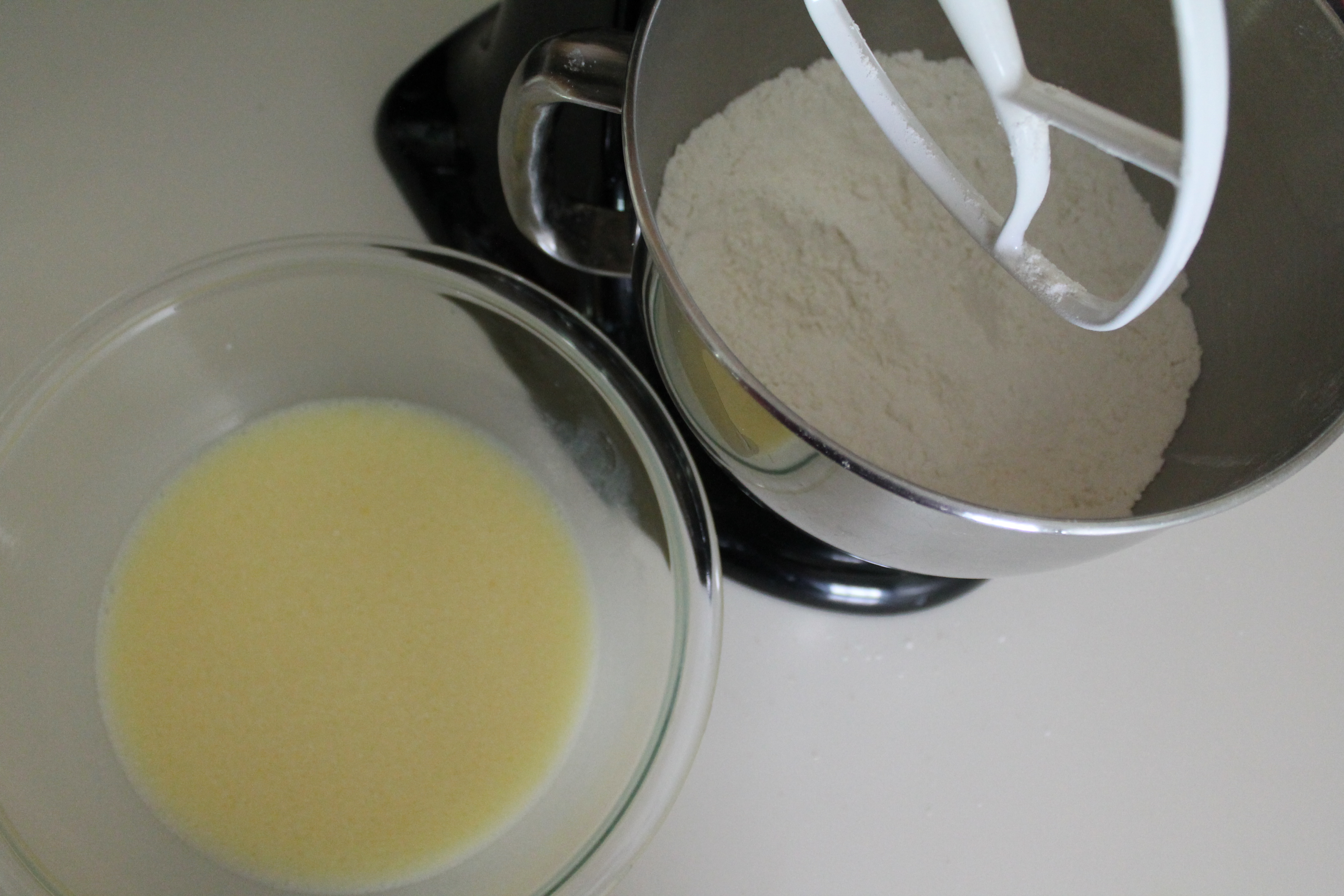 So first, we must make muffins! Super easy. Whisk together the flour, sugar, salt, baking powder, and nutmeg. I used freshly grated nutmeg, because I happened to have some on hand. Nutmeg is the key flavor inside a donut…it’s what makes a donut taste donutty!

In a separate bowl, whisk together the milk, oil, and eggs. I used whole milk in this recipe (!!) because I had some in the fridge that I needed to use up. The muffins were quite delectable…but I am sure they would be equally awesome with a lower fat milk! 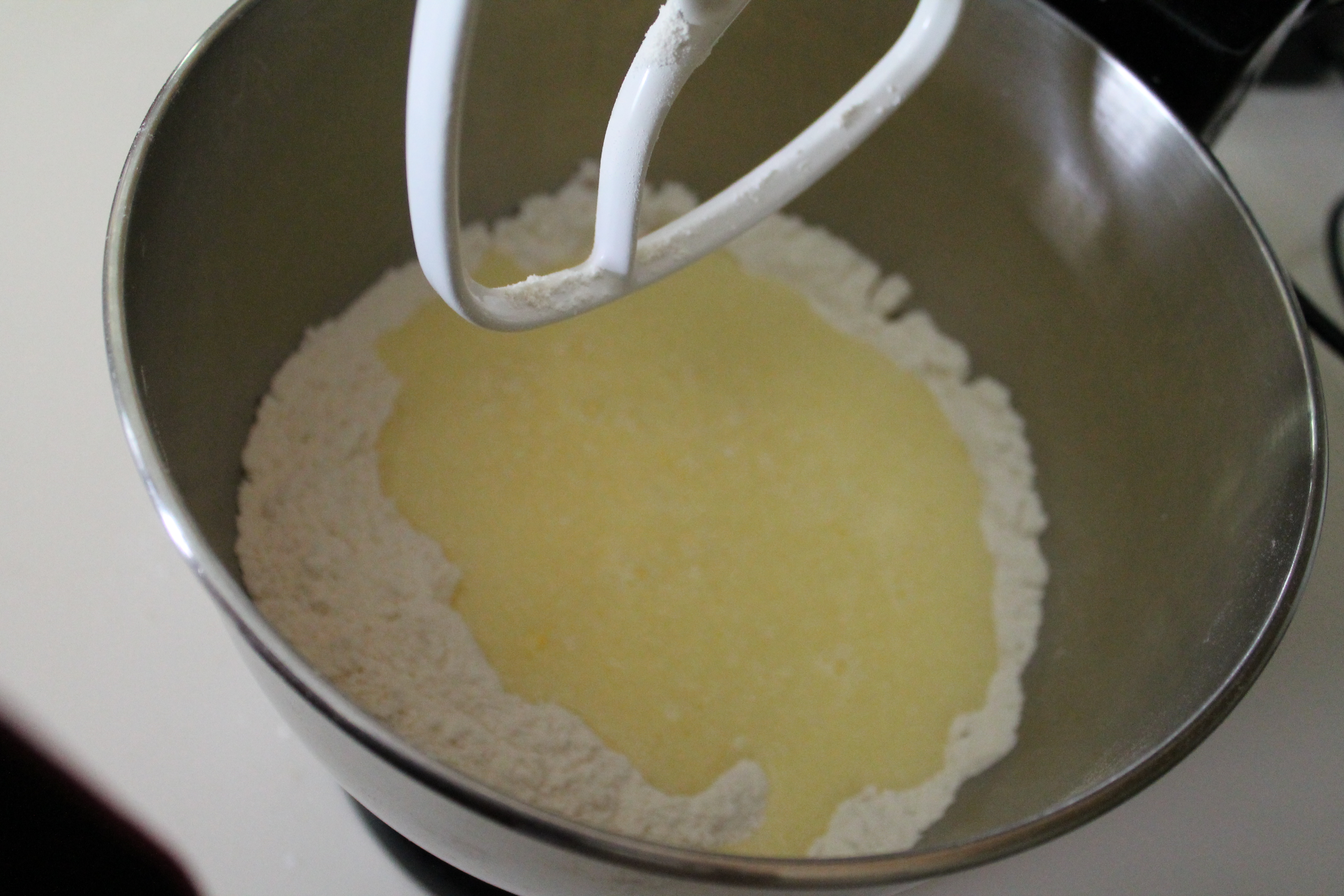 Make a well in the flour mixture and pour in the liquid. Stir until just combined. 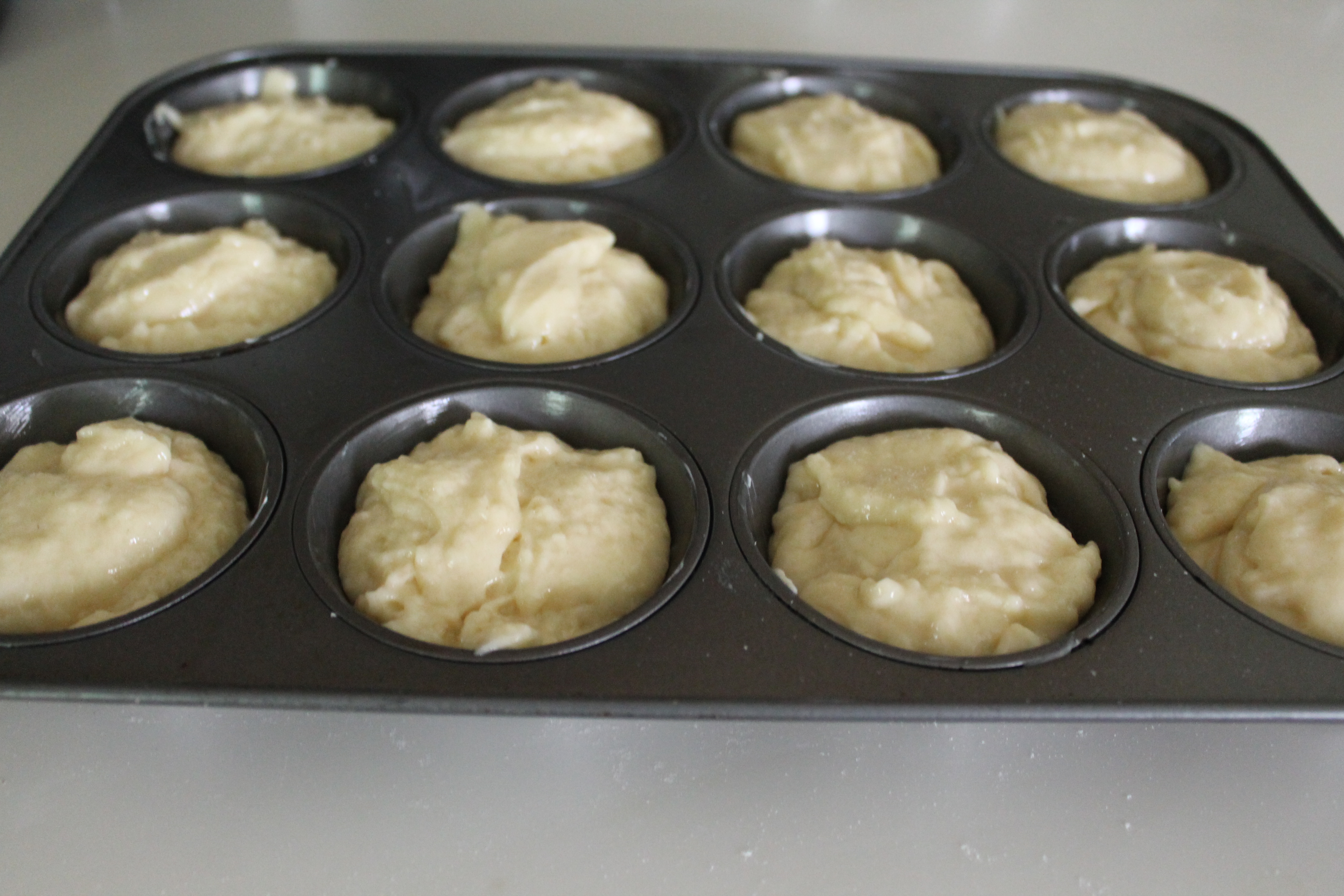 Butter the cups of your muffin tin. I really don’t recommend using cooking spray here, because it will likely cause the edges of your muffins to burn. And, naturally, you can’t plan to use muffin liners for this recipe, because you will need to dip the muffins as soon as they come out of the oven. I actually cut a sliver off of the butter designated for dipping/cinnamon-sugar later on.

Scoop the batter into the greased muffin tin, filling the cups nearly to the brim. 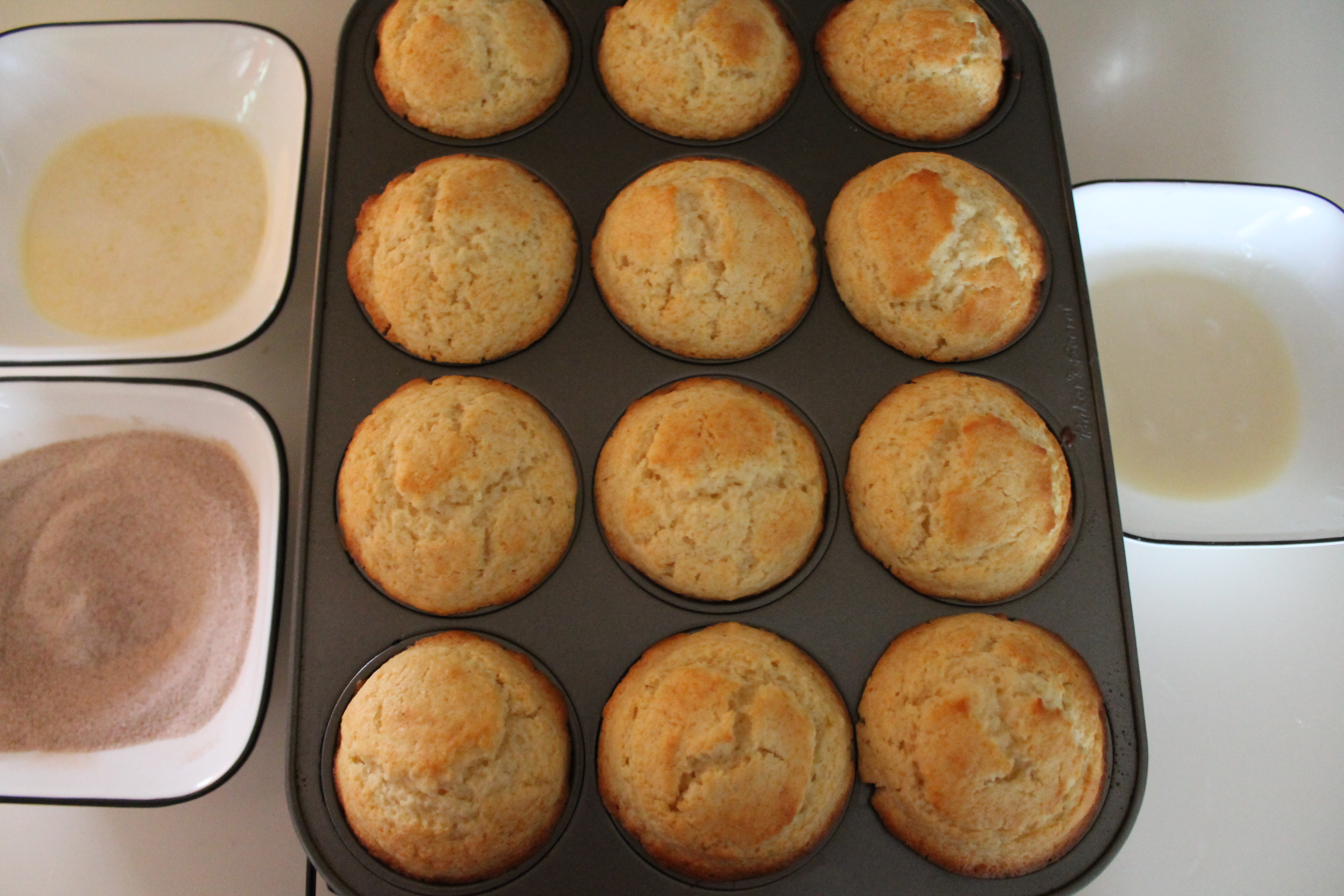 While the muffins bake, prepare your coatings. You will need 3 bowls, one with melted butter, one with cinnamon-sugar, and one with vanilla glaze (don’t worry, we will do the chocolate glaze later). 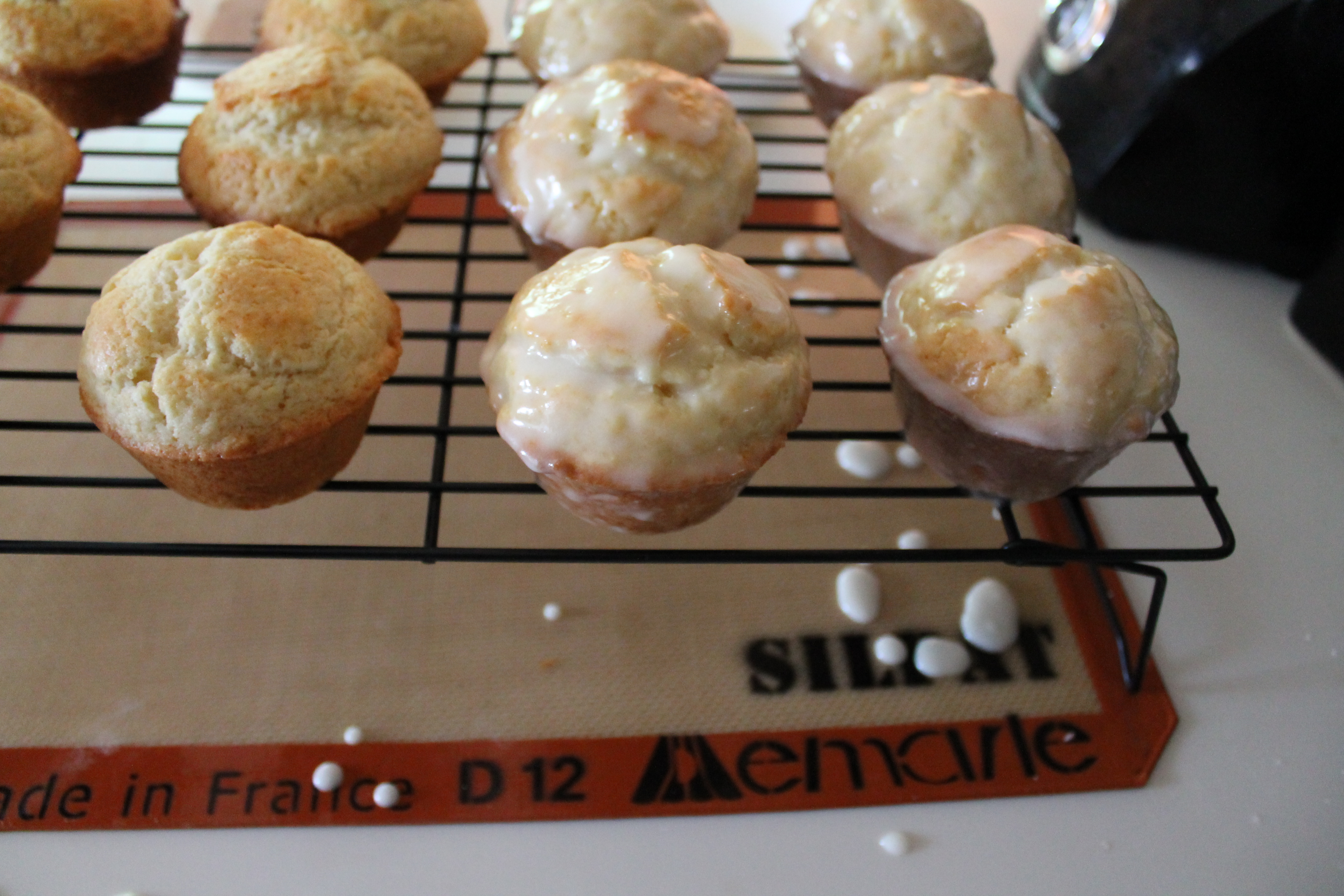 As soon as the muffins come out of the oven, dump them out of the tin. Immediately roll 6 muffins in the vanilla glaze, scraping off any excess with your fingers. I had to use my fingers to sort of paint the last 2 with glaze; there isn’t going to be much glaze left over at all, but there is definitely enough to cover the surface of all 6 muffins! 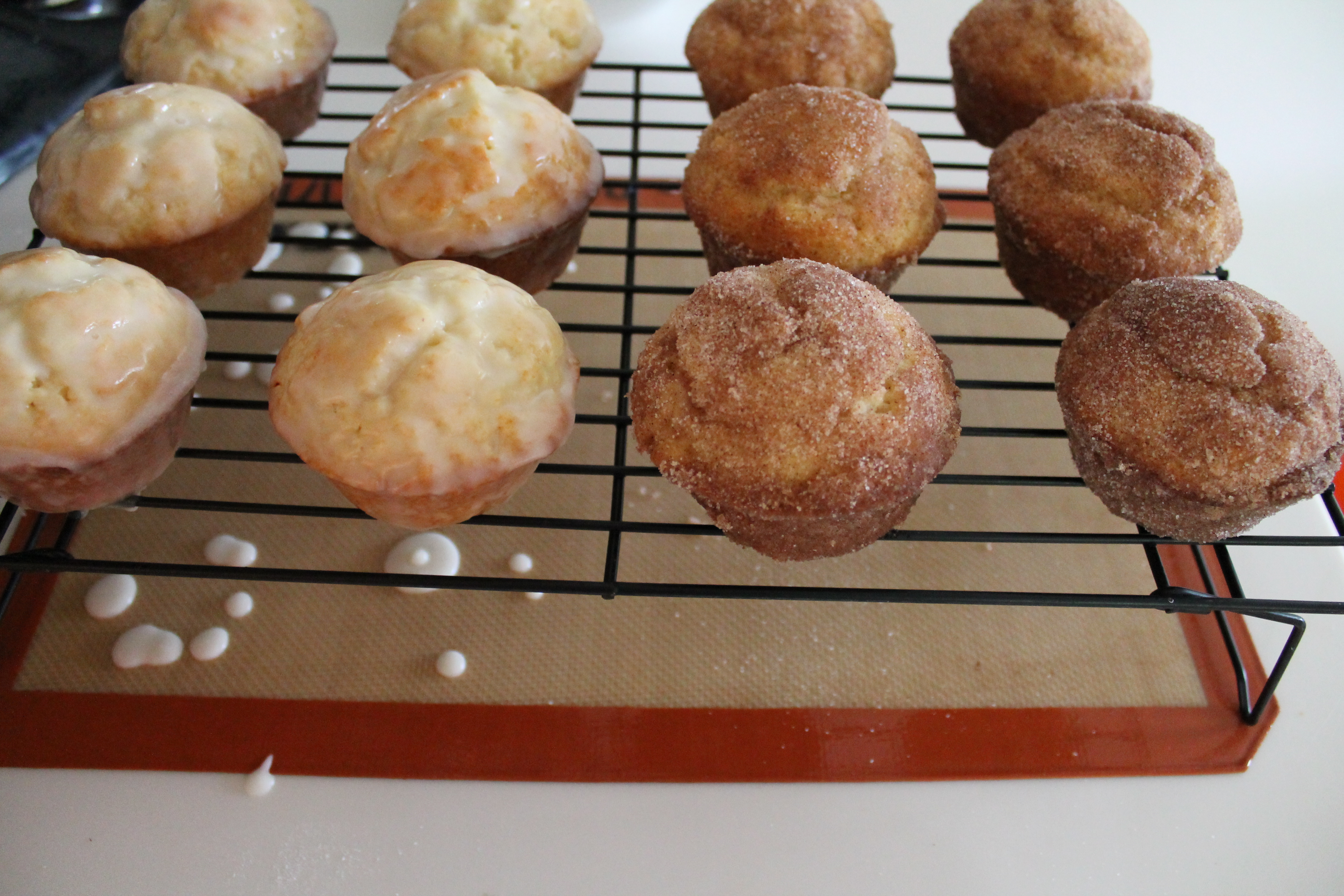 Good news! The cinnamon version is done! Now you need to be patient for 30 minutes or so to let the vanilla glaze set. 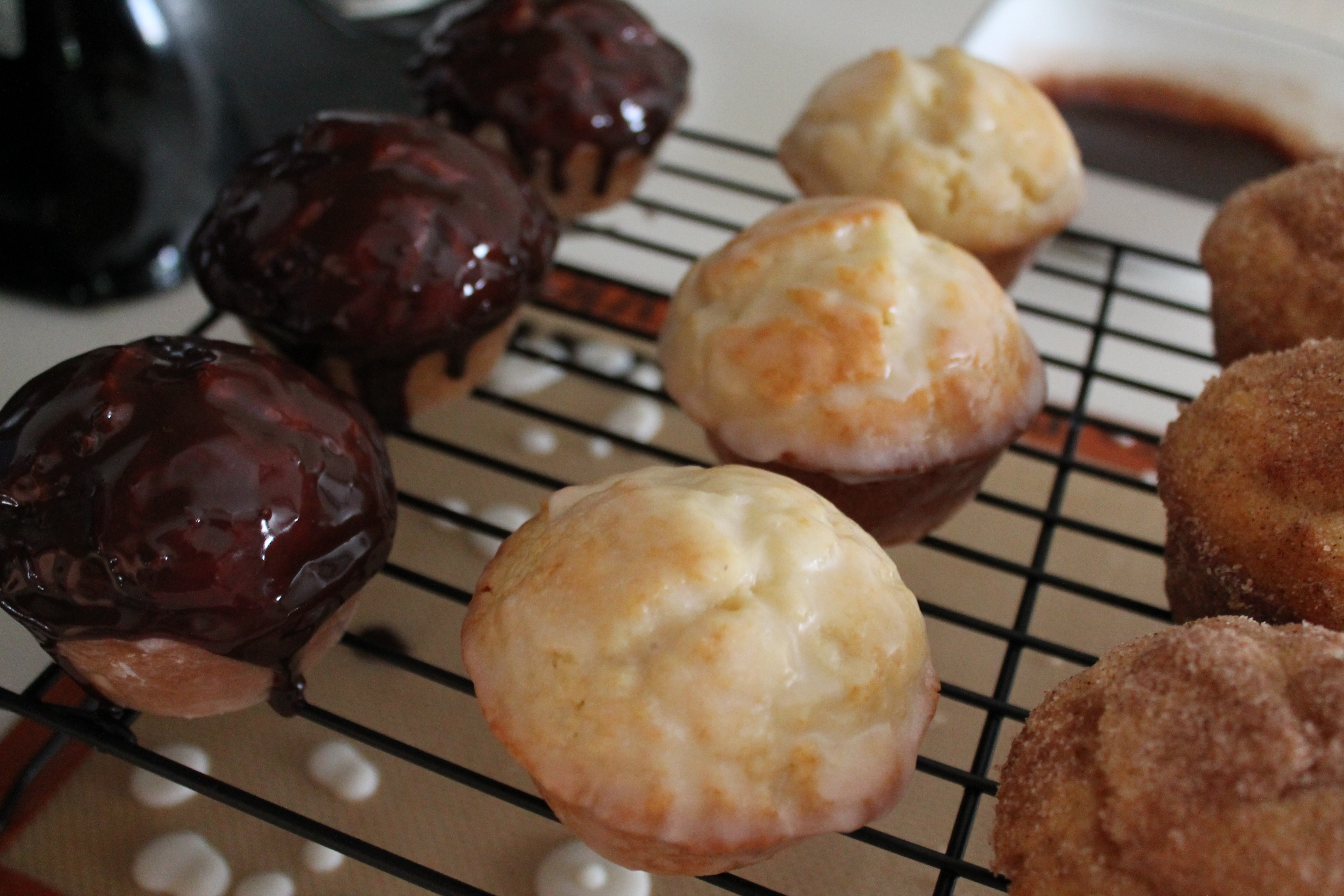 When the vanilla glaze is set, it’s time to make the chocolate glaze for the top! Melt together chocolate chips, milk, butter, and a drop or two of vanilla extract. Whisk with a baby whisk or little fork until smooth. Um, apparently I had made a note to myself to use less milk in the chocolate glaze after I made these muffins the first time, but I spaced and used the extra milk anyway when I was taking these pictures. Whoops. I did correct that below, so hopefully your chocolate won’t be quite as thin as mine was!

Dip the tops of the glazed muffins in the chocolate. 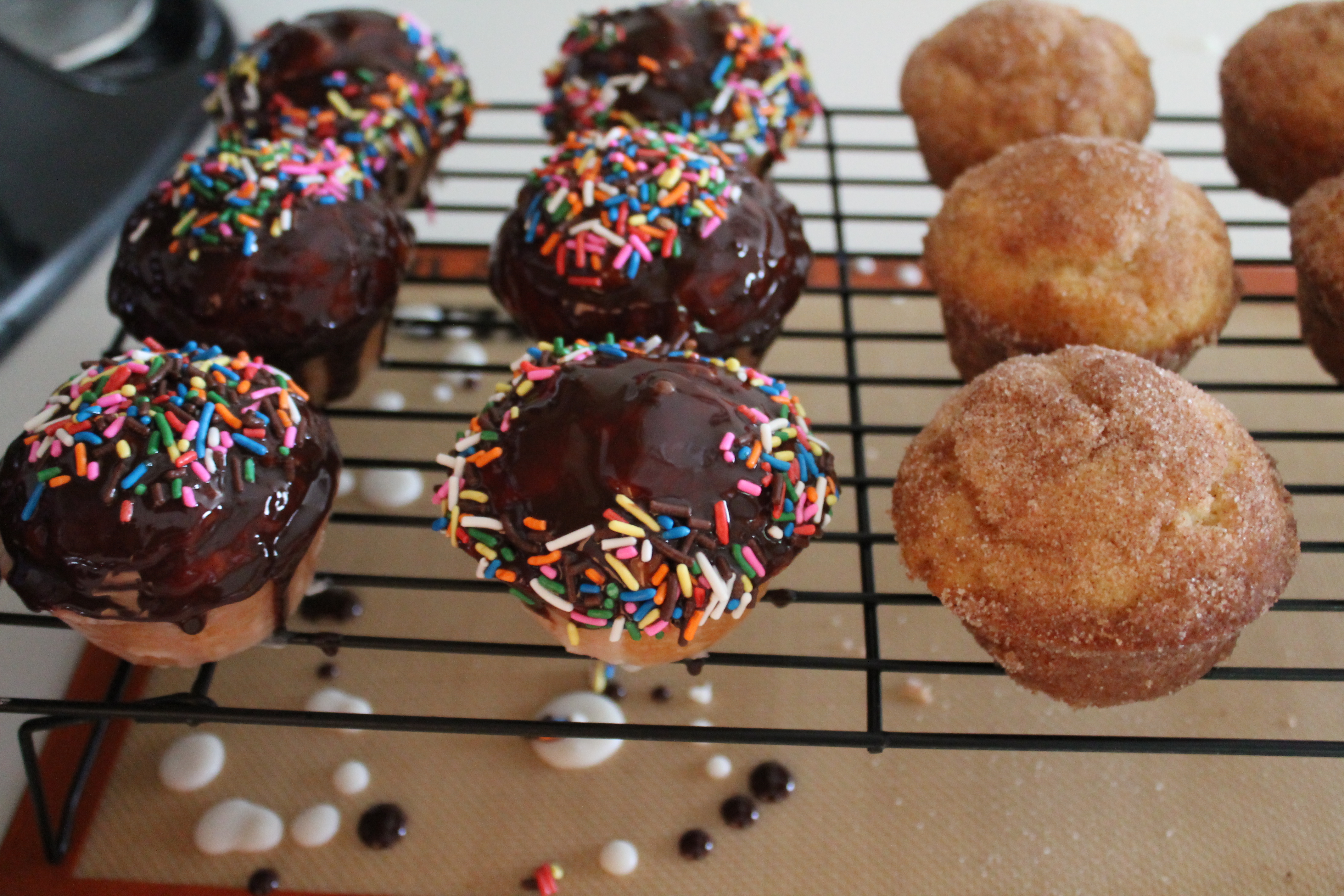 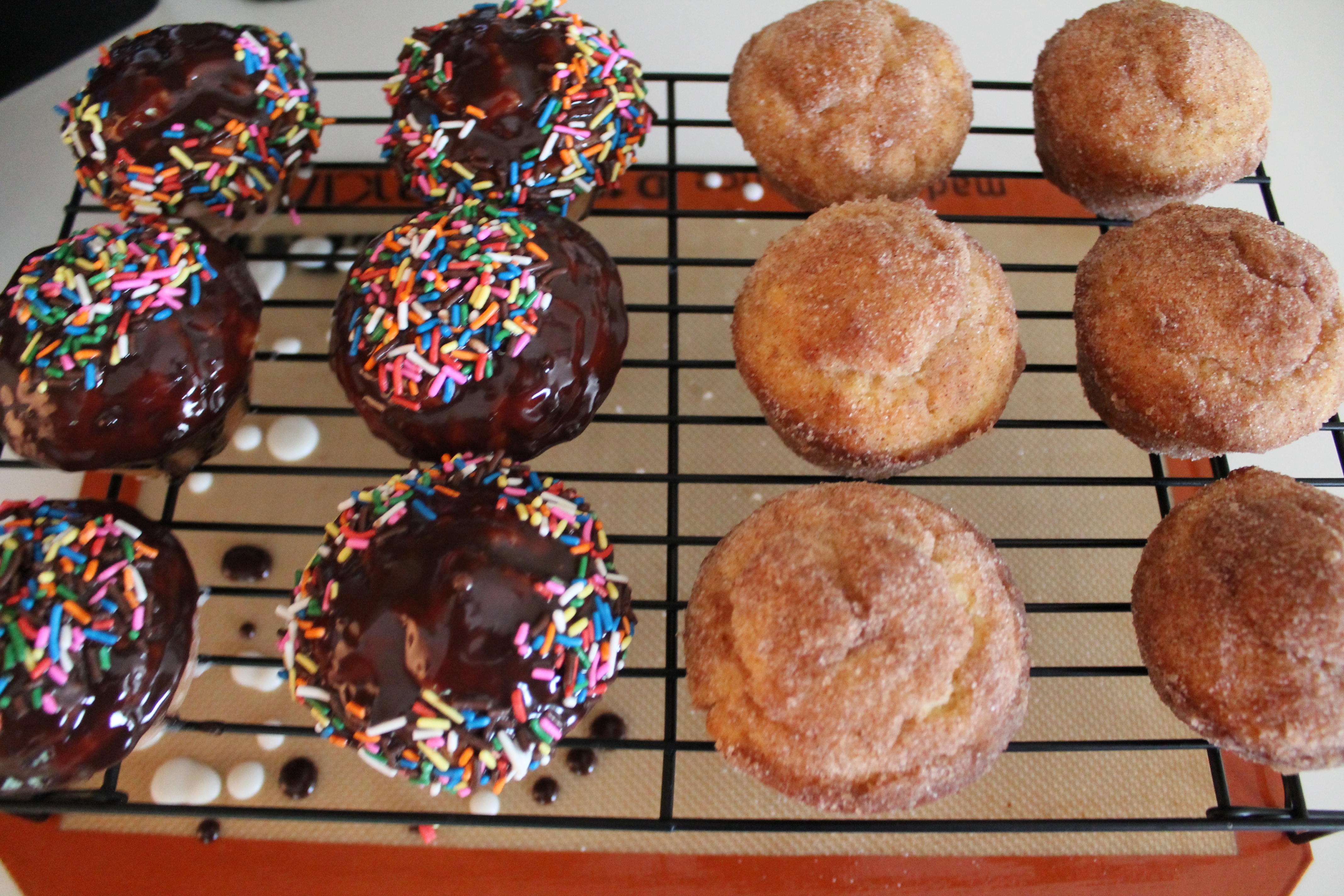 So I really like to make half of these donut muffins one way and half the other. Therefore, below, the “finishers” are written to coat only 6 muffins apiece. If you want to make all of your donut muffins cinnamon or all chocolate, don’t forget to double the ingredients!

heavily adapted from Secrets from the Cookie Princess
makes 12

Directions:
Preheat oven to 400°. Butter the cups of a muffin tin.
Combine dry ingredients in a large bowl. Combine wet ingredients in a separate bowl.
Make a well in the dry ingredients. Pour in the wet ingredients and stir until just combined.
Scoop the batter into the prepared muffin tin.
Bake for 15–20 minutes, or until golden brown and set.
Meanwhile, stir together the confectioner’s sugar, melted butter, milk, and vanilla extract to make a glaze. Melt the butter in a small bowl, and combine the sugar and cinnamon in a separate bowl.
When the muffins come out of the oven, immediately remove them from the tin. Coat half of them in vanilla glaze, gently wiping any excess off. Set on a wire rack to cool and set completely.
Dip the remaining muffins into the butter, then coat in cinnamon-sugar.
When the muffins are cool and the vanilla glaze is set, make the chocolate glaze. Melt together the chocolate chips, milk, and butter in a small bowl. Stir in the vanilla. Dip the tops of the glazed muffins in the chocolate glaze and return to the rack to set. If desired, dip or roll in sprinkles.