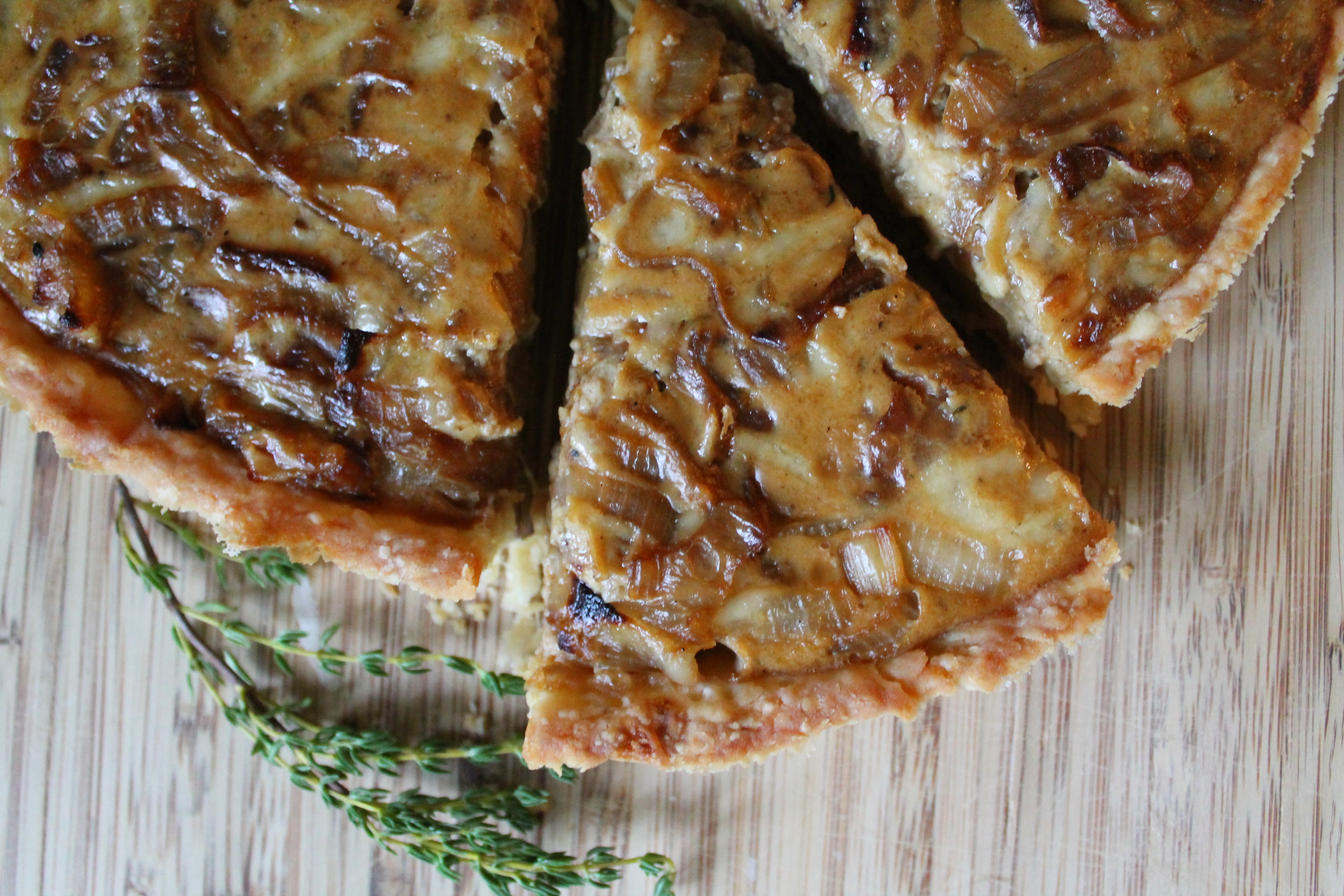 I am not sure how I got it in my head that I just had to make an onion tart…but suddenly, one day, it was all I could think about.

This tart is amazingly delicious, a little like French onion soup with a crust. It’s got deep brown, caramelized onions, a small mountain of shredded Gruyère cheese, freshly grated nutmeg, and fresh thyme. It’s like a dance in your mouth. 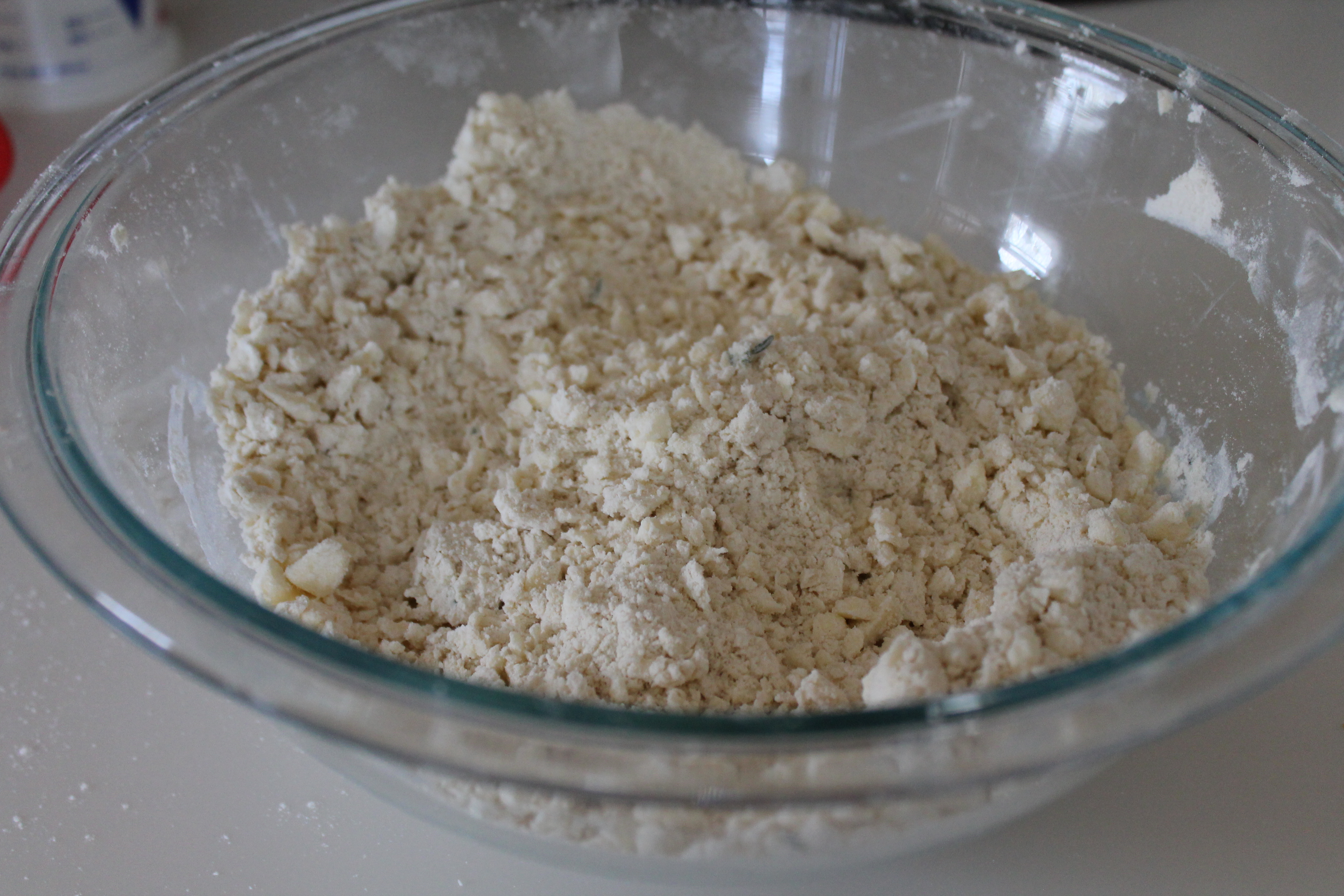 First, we make tart crust. You can do it! Pastry crust isn’t that scary! Just whisk together salt, flour, and fresh thyme. Then grab a pastry cutter and just smush, smush, smush until all the butter and shortening is evenly mixed in and pea-sized. I always like to cut the fats in a little more thoroughly if I need to par-bake the crust, as we are here.

Now grab a fork and toss in the water, a few tablespoons at a time. For par-baked crusts, it is usually a good idea to go a little light on the liquid. Don’t worry if the crust dough is still pretty shaggy; it will come together when you knead it and it will roll out just fine! But moister crusts puff more while baking, which isn’t great if there is no filling to weigh it down.

Knead the dough several times to get it to come together, then form into a disk and wrap in plastic wrap. Although there is significantly more dough than you actually need for the tart, it is much easier to get a nice, pretty tart shell when you roll the whole batch of dough out rather than working with only half.

Chill the dough for 30 minutes in the fridge. 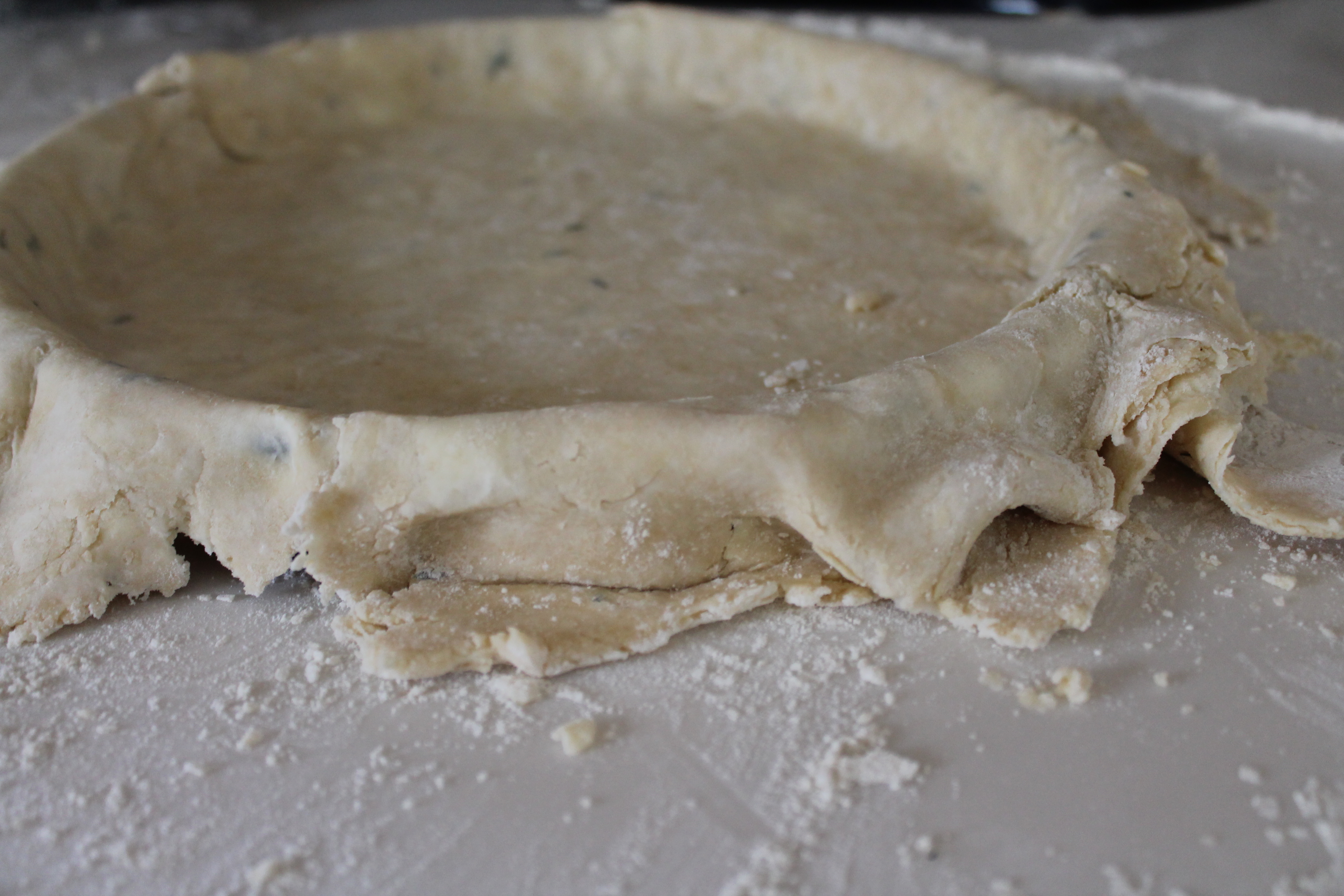 When the dough is chilled, pull it out of the fridge, unwrap it, and set it on a lightly floured surface. Roll it out until it is about ¼″ thick. Carefully fold the crust in half and in half again, then lift it into your tart pan (you can also use a large pie plate, if that’s what you have!). Unfold the crust and center it, then gently roll your rolling pin around the rim of the tart pan to cut off the excess crust.

Save the extra crust for cookies or additional tarts/quiches! Be sure to bake it within 2 days, before it grays. 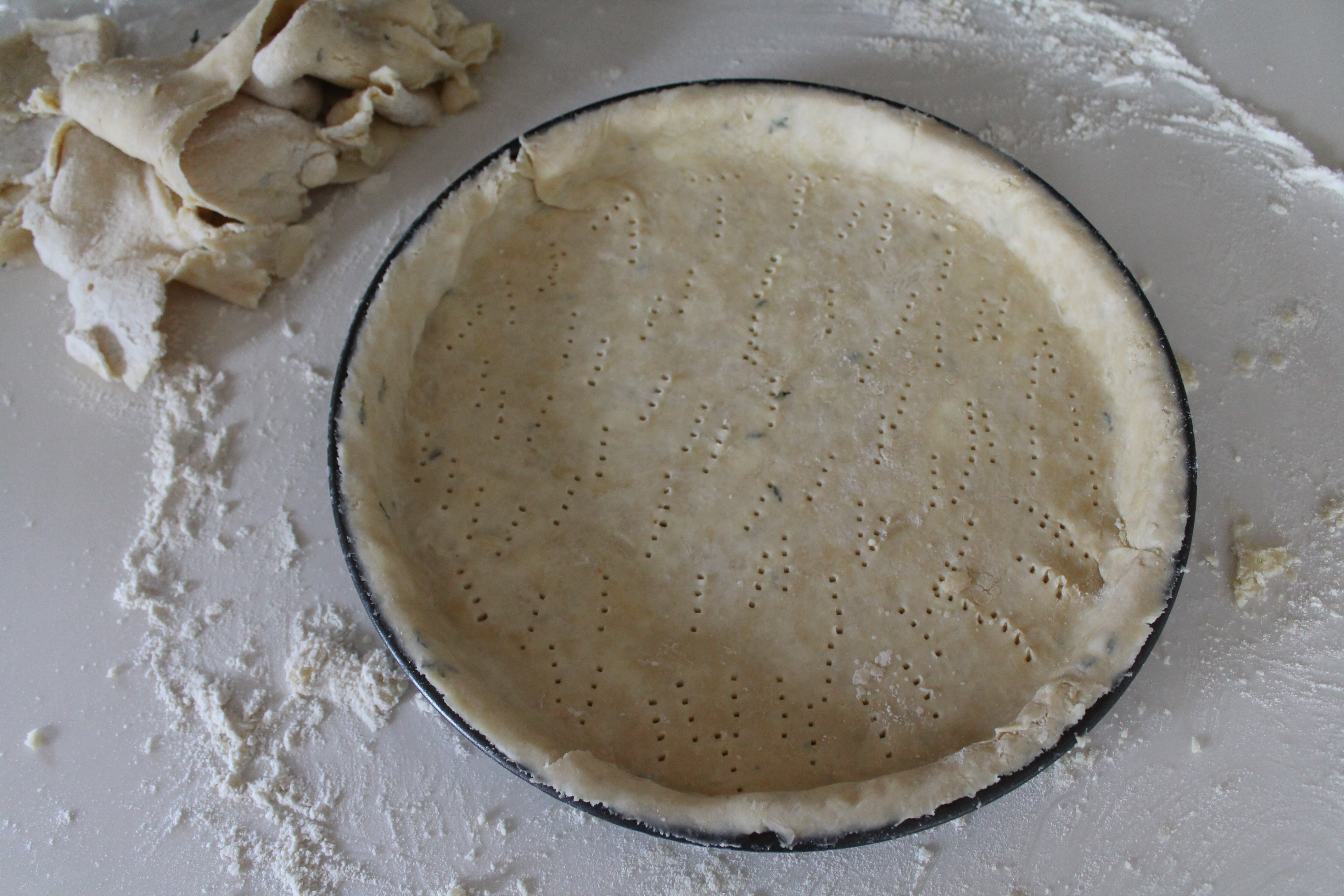 Vigorously prick the crust all over with a fork. This will help prevent shrinkage while the crust bakes. Return the crust to the fridge to chill until firm, about 30 minutes. 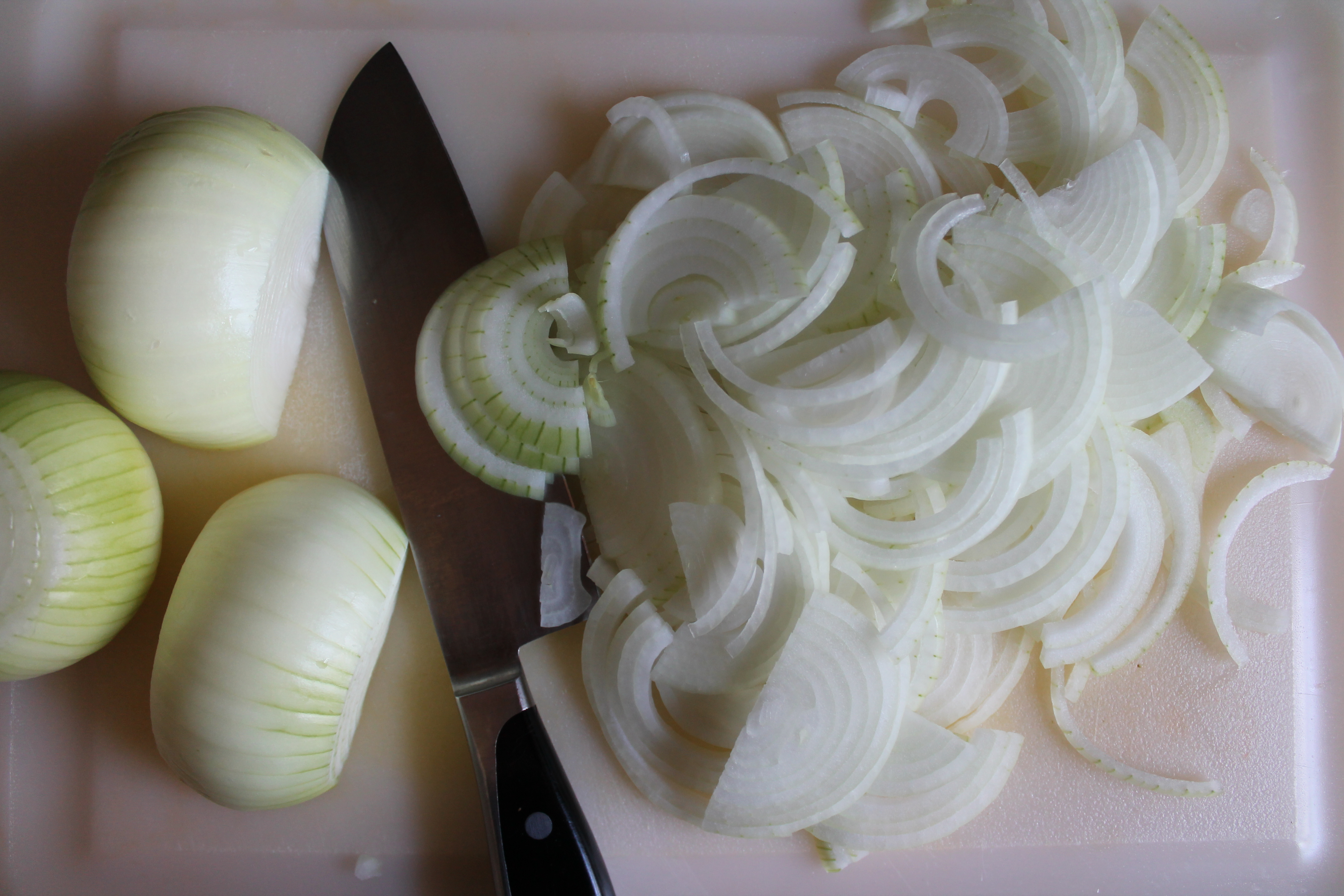 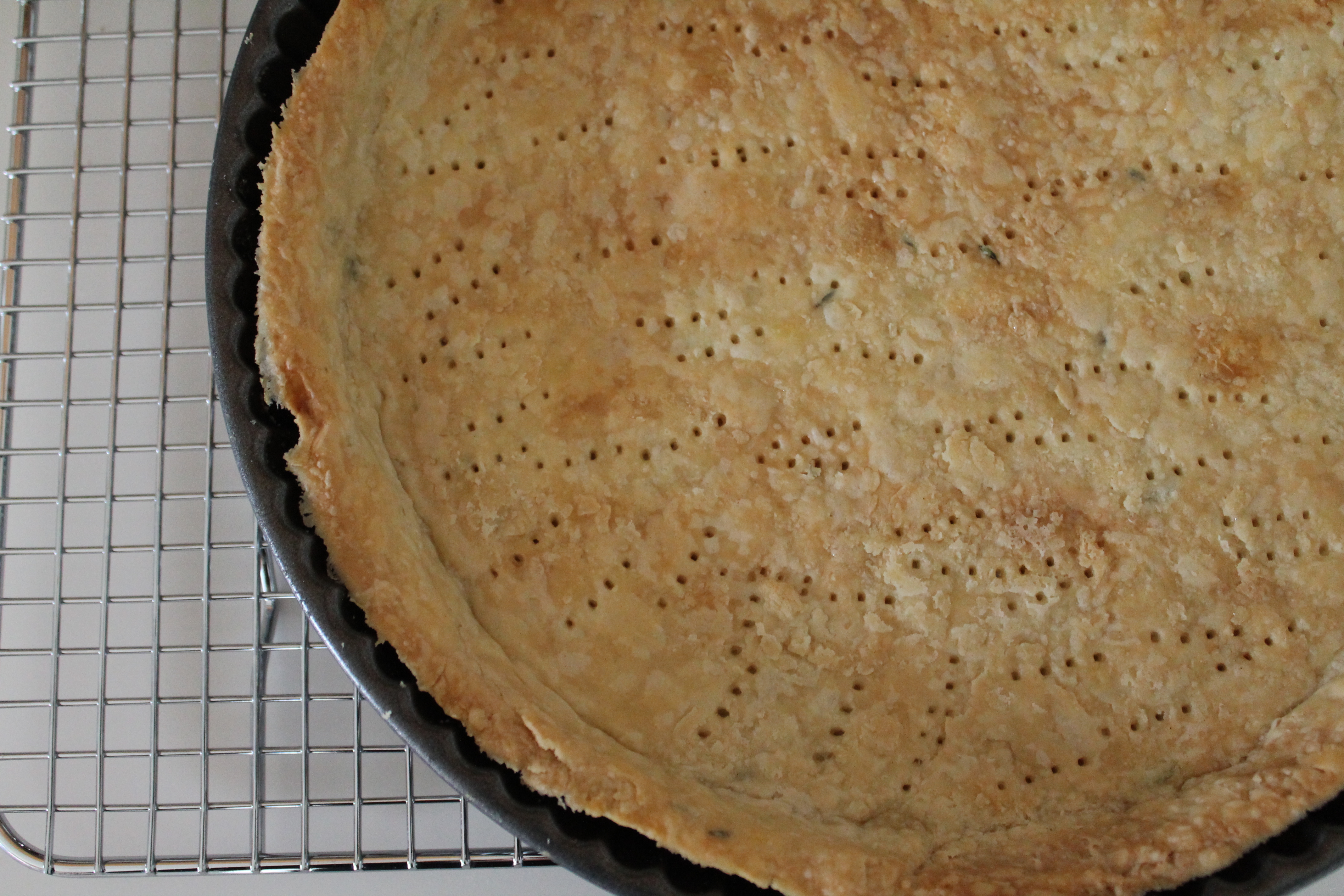 When the crust is chilled, heat the oven to 400°. Gently press a sheet of foil, shiny side down, into the tart shell, and fill the foil with dry rice. The rice acts as a weight that prevents the crust from shrinking or bubbling weirdly while baking; there are other types of pie weights, of course, even ones you can buy in the store that look like enormous white ball bearings. I prefer rice because the weight is much more even across the whole crust (no little dents, greater likelihood that the whole crust will bake equally), and I generally don’t fill the foil more than halfway, again so that the crust will be able to bake properly.

Set the crust in the oven to bake for 15–20 minutes. It should look completely dry but very pale when it is baked through. Remove the foil and bake another 7–10 minutes, until lightly browned. 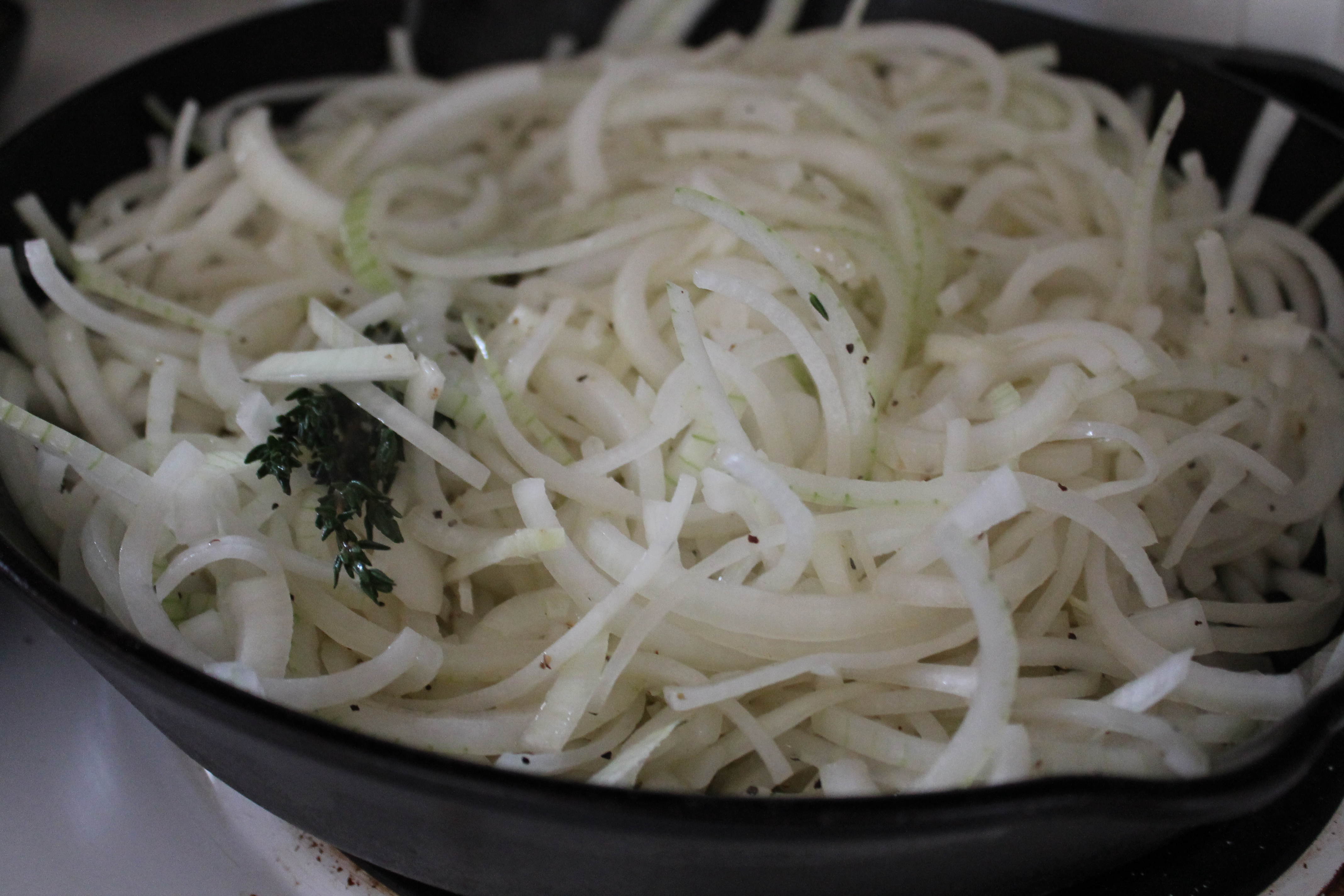 While the crust bakes, caramelize the onions! This is a fairly low-effort process. Just dump the onions and a huge hunk of butter into a large skillet over medium heat. Cook, stirring occasionally, until the onions wilt (they will be flexible and slightly translucent, and they will take up less space in the pan). 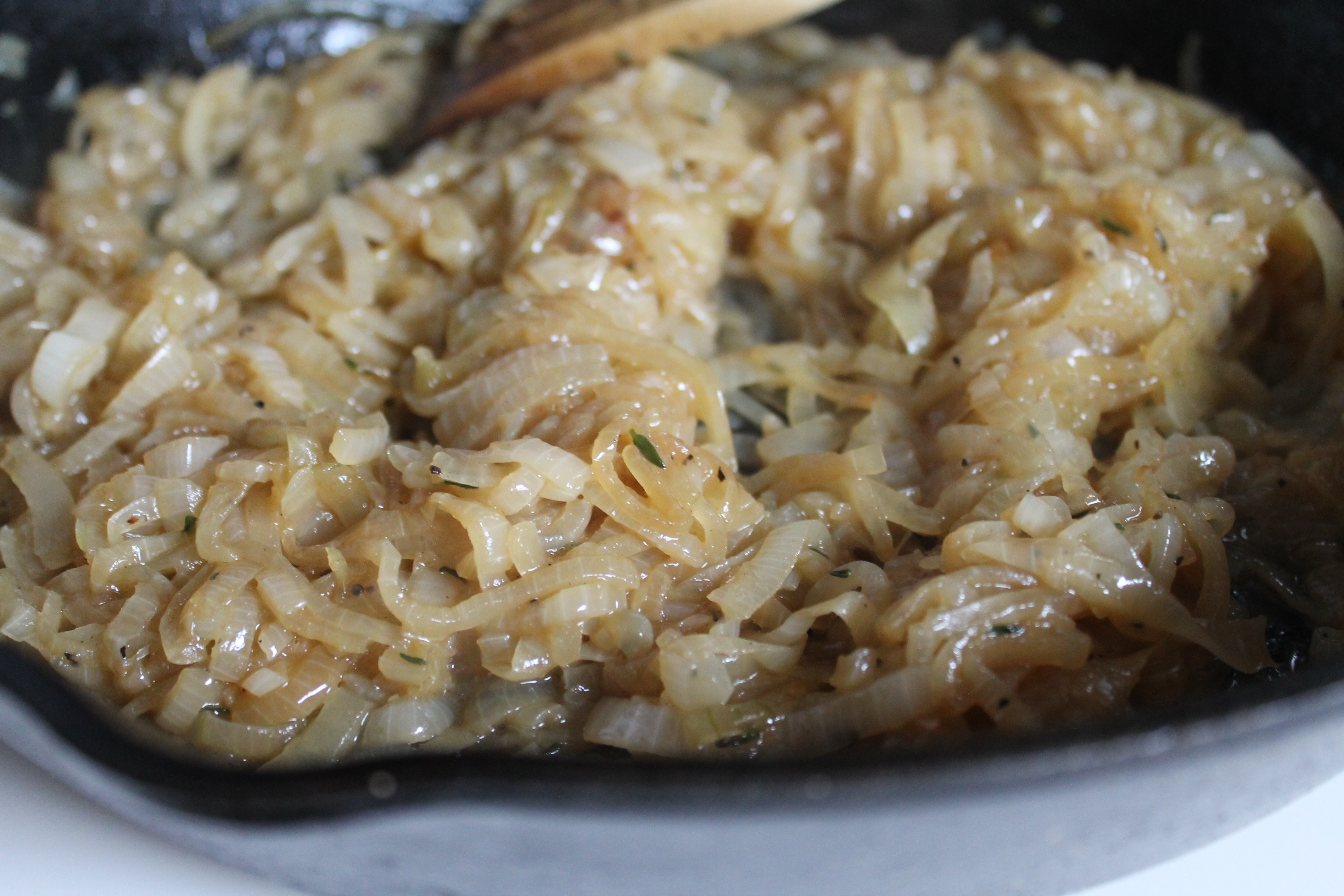 Toss in some salt, black pepper, and a large sprig of thyme. Cover the onions with a sheet of foil and let them cook for another 20 minutes, until deeply brown, stirring every 3 minutes or so. 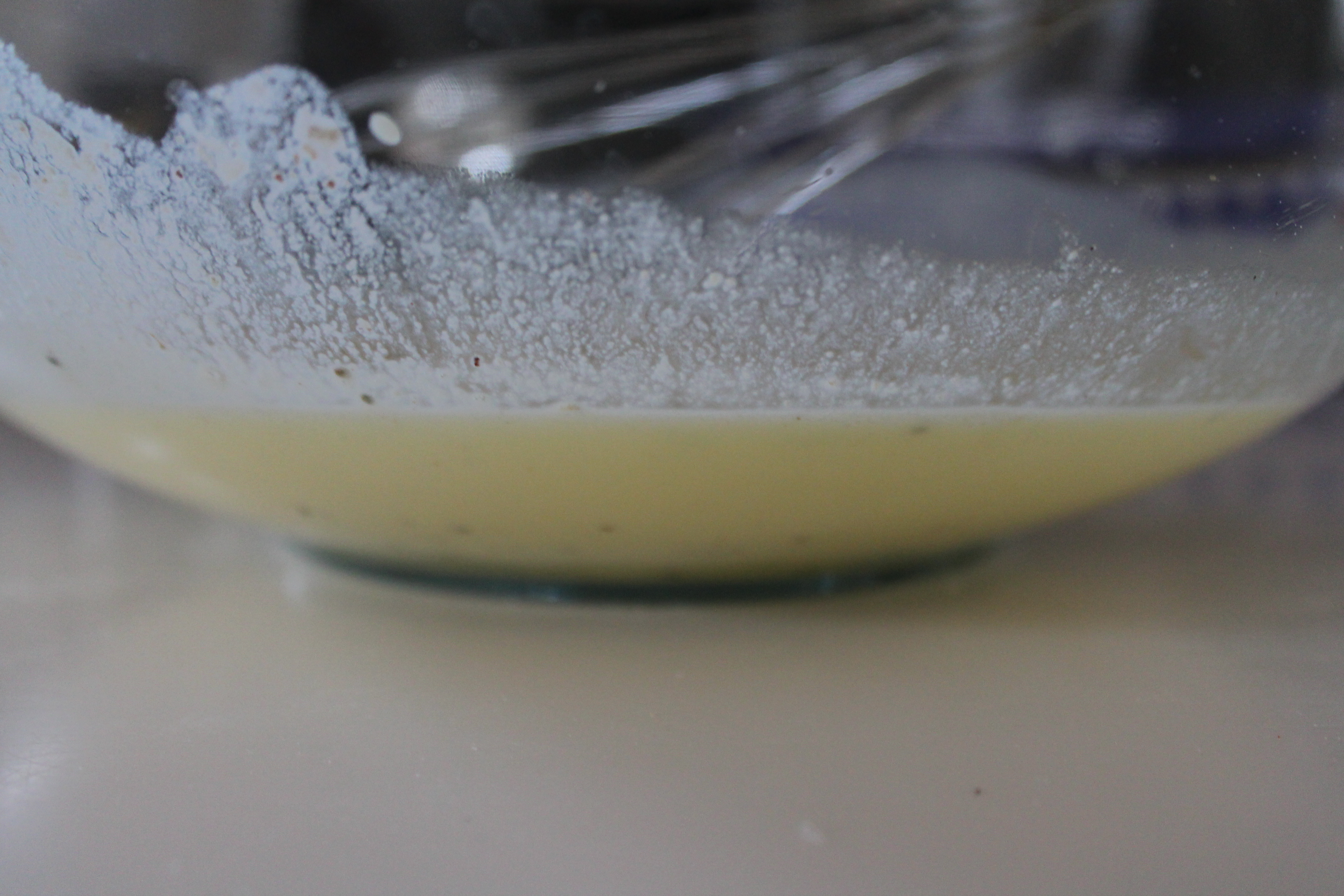 In a separate bowl, whisk together the eggs, sour cream (or crème fraîche or milk), freshly grated nutmeg, and the remaining salt and black pepper. Grate the Gruyère into the bowl with the eggs.

When the onions are browned, remove the pan from the heat and let them cool for 10 minutes. Remove the thyme (the leaves will have fallen off, so you will just be digging out the twig). Then mix them into the eggs. 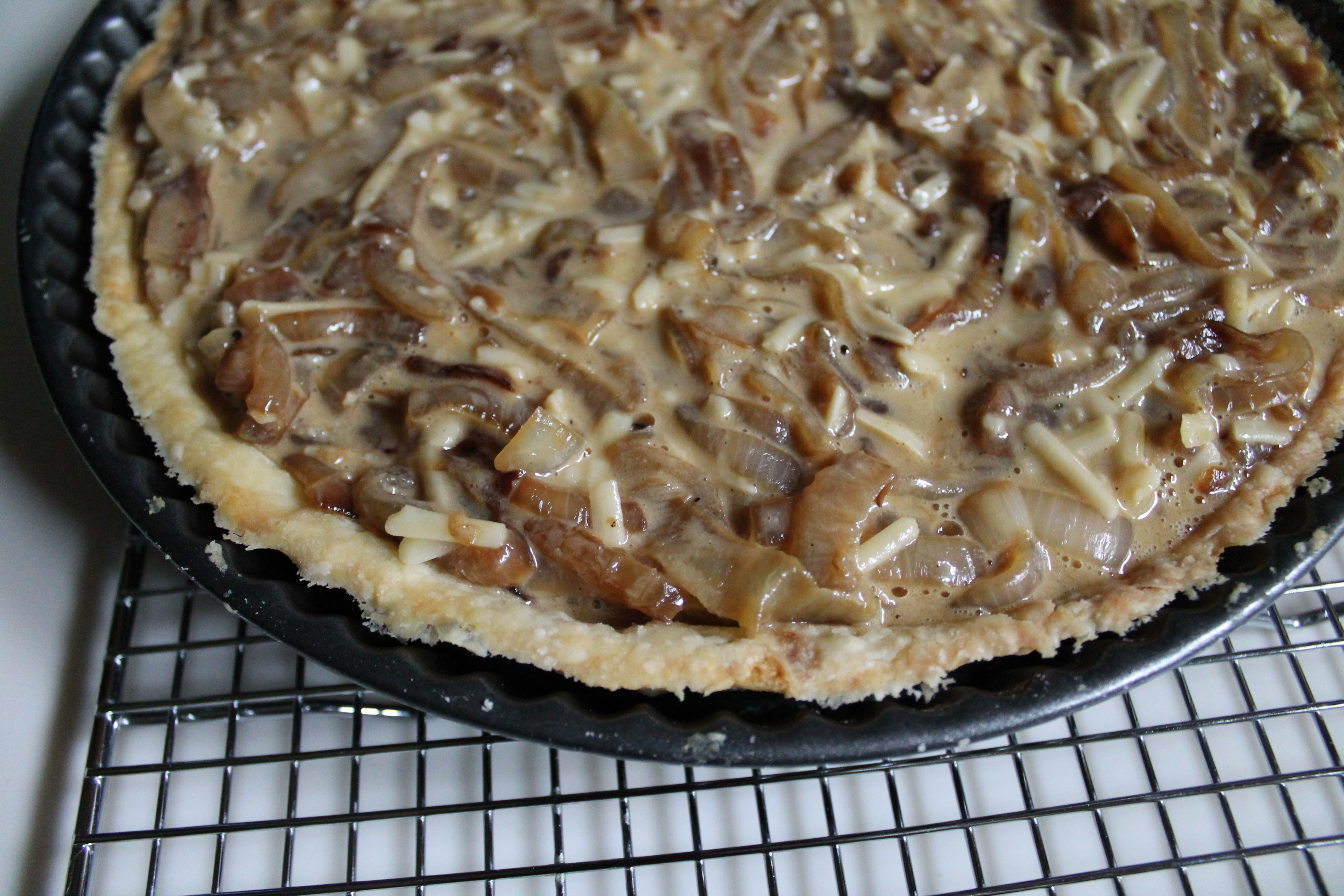 Pour the onion mixture into the tart shell. Bake for 22–25 minutes, or until the center of the tart is set. Turn on the broiler and cook another 2 minutes or so to brown the top of the tart. 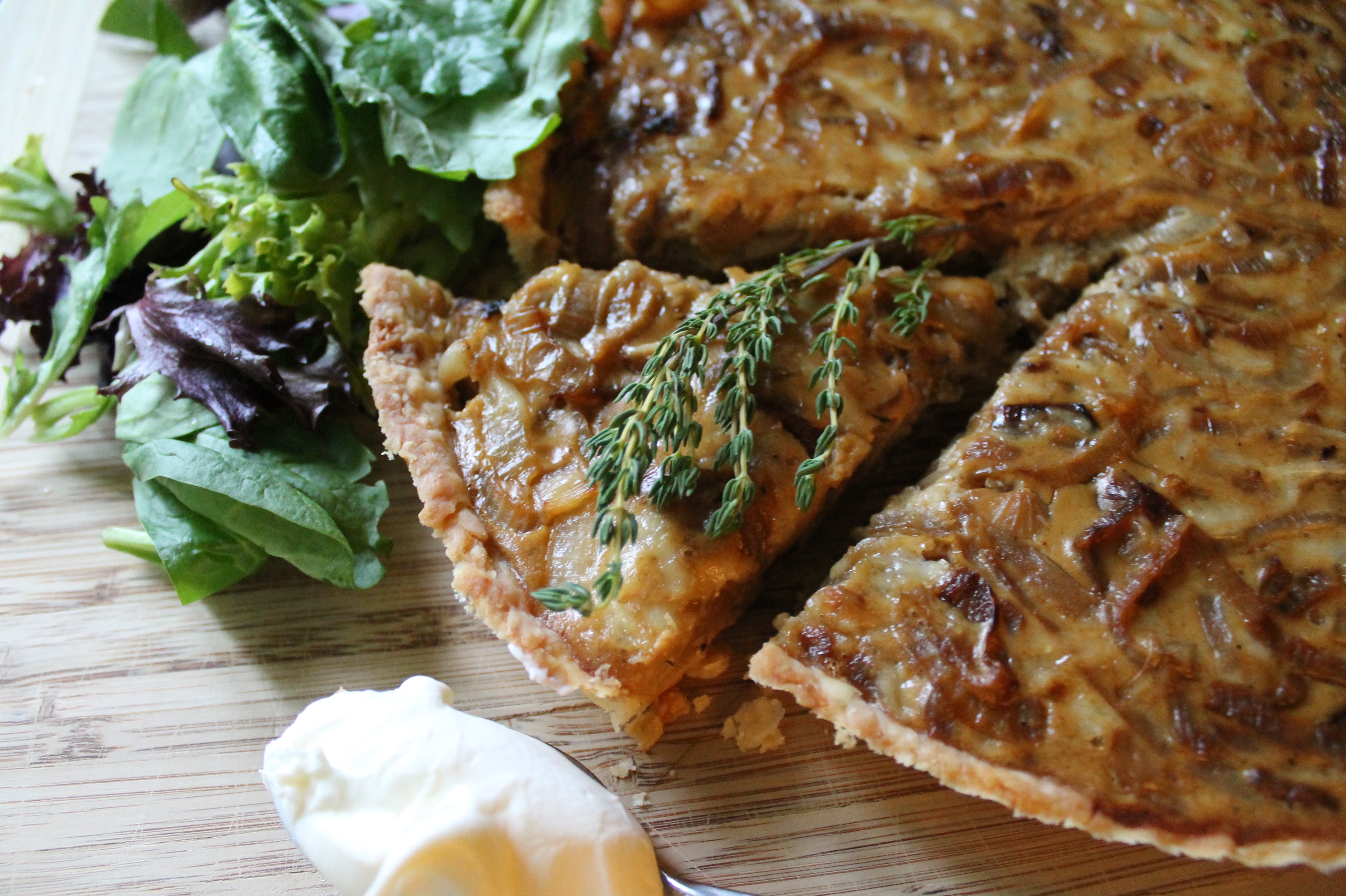 Serve with extra thyme and a generous dollop of crème fraîche. The savory tang of the crème fraîche contrasts beautifully with the caramelized onions and the nutmeg. Yum!

Directions:
Whisk together flour and salt for the crust. Cut in butter and shortening until fine and even. Add water, a few tbsp. at a time, until the dough can be pressed together (err toward less water). Knead a few times, then shape into a disk and wrap in plastic wrap. Chill in the fridge at least 30 minutes.
Roll the dough out on a lightly floured surface. Lay into a 9ʺ fluted tart pan and cut off the excess dough (save the excess for another use). Prick the bottom thoroughly with a fork. Chill the crust in the fridge at least 30 minutes, or until firm.
Heat the oven to 400°. Line the crust with foil or parchment paper and fill the lining with dry rice.
Bake the crust for 15–20 minutes, or until completely set and barely golden around the top. Remove the rice-filled lining and bake another 10 minutes, until browned.
Meanwhile, combine the onions and butter for the filling in a large cast iron skillet. Cook over medium heat until the onions begin to wilt. Add in the sprig of thyme and season with ½ tsp. salt and ½ tsp. pepper. Cover the pan with foil. Continue cooking for another 20 minutes, lifting the foil to stir every 2–3 minutes, until the onions are deeply browned. Remove from the heat and let cool for 10 minutes.
In a large bowl, thoroughly whisk together the sour cream, eggs, nutmeg, and remaining ¼ tsp. salt and pepper.
Remove the thyme from the onions. Stir the onions and shredded cheese into the egg mixture.
Pour the onion mixture into the baked tart shell.
Bake the tart for 22–25 minutes at 400°, or until the center is set. Optionally broil for a few minutes to brown the top.
Let stand 10 minutes before serving. Serve warm with a dollop of crème fraîche.