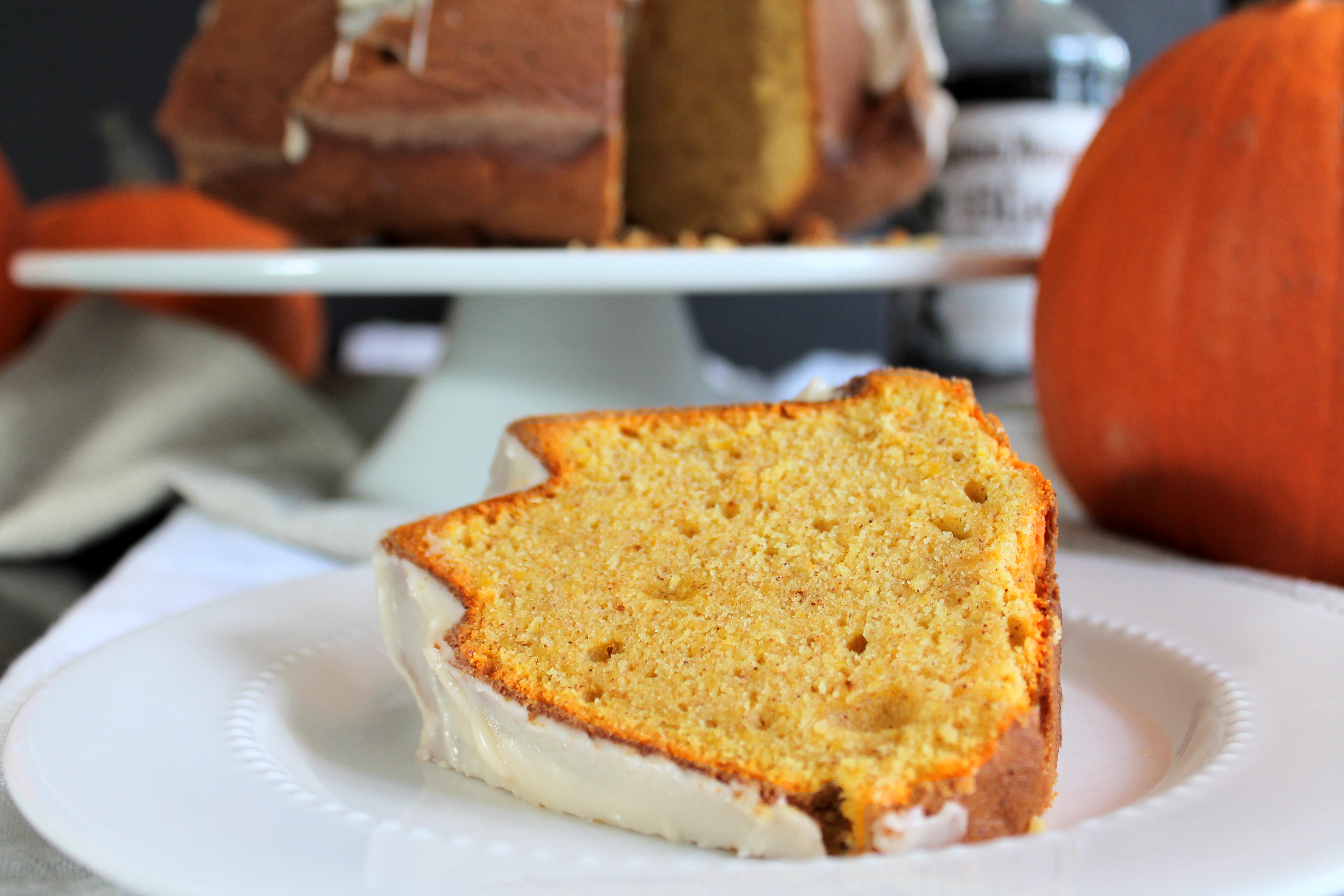 About a year ago, a good friend of ours left a bottle of spiced rum at our house, as a gift.

To be honest, neither of us are big cocktail drinkers. And so, the bottle of rum has gathered dust in the cabinet.

But then, as part of the Secret Recipe Club challenge for October, I stumbled across a pumpkin recipe I knew I had to try: drunken pumpkin cake. (At last, the spiced rum will have its day!)

This month for SRC, I was assigned Little Bit of Everything, written by Julie. Julie has been blogging since 2009, and she started her blog as a way to document her journey through her cookbook collection! I love how she keeps a list of the daring recipes she wants to try, because I do the same thing!

I made a lot of changes to Julie’s drunken pumpkin recipe, which was originally a very sweet quickbread. First of all, I have been trying to cut back on sugar, so I knew I would feel a little less guilty if I decreased the sugar by a third and kept all the amazing pumpkin flavor. I was a little nervous about tampering with the ratios of ingredients: baking is a science, and it requires precision! But after doing a good bit of reading and some baking math, I felt confident. 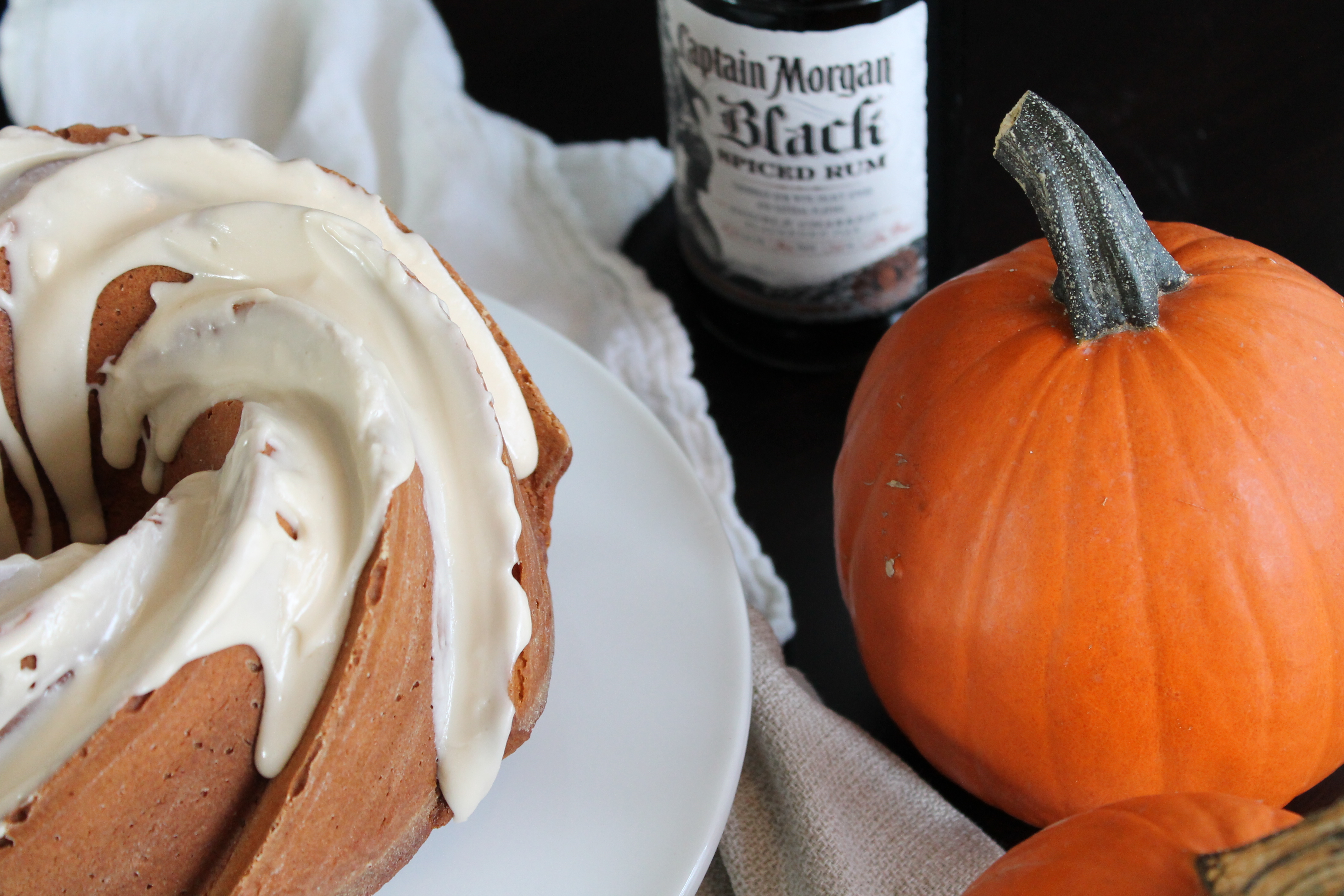 Second, I wanted to lean into the cakey nature of quickbreads. Quickbreads and cakes are made with nearly identical ingredients, but you add them and mix them in a different order. I prepared this recipe like it was cake, using the creaming method. While I was at it, I figured I might as well turn up the fancy factor, and the cake got a makeover into a spiral Bundt pan. I also gave it a drunken glaze. Yum.

The end result was completely delicious: a moist yet springy cake, much like pound cake, with all the right spice and a punch of dark rum.

So let’s eat some cake! 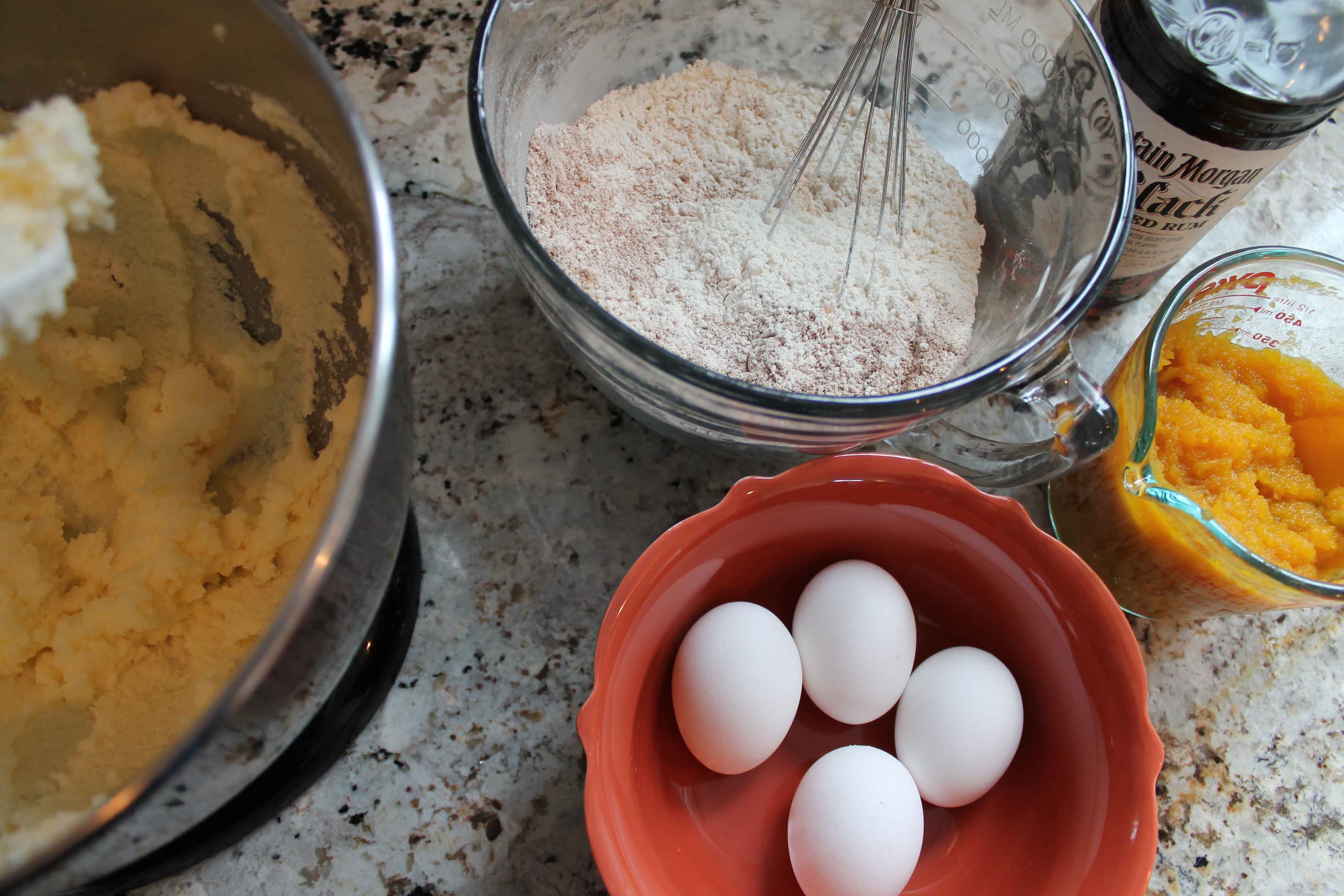 We are going with the tried-and-true creaming method for mixing our pumpkin Bundt, so start by creaming the butter and sugar together until it is pale and uniform. There is a lot more sugar than butter by volume, so the result will be quite stiff, rather than airy. No worries! 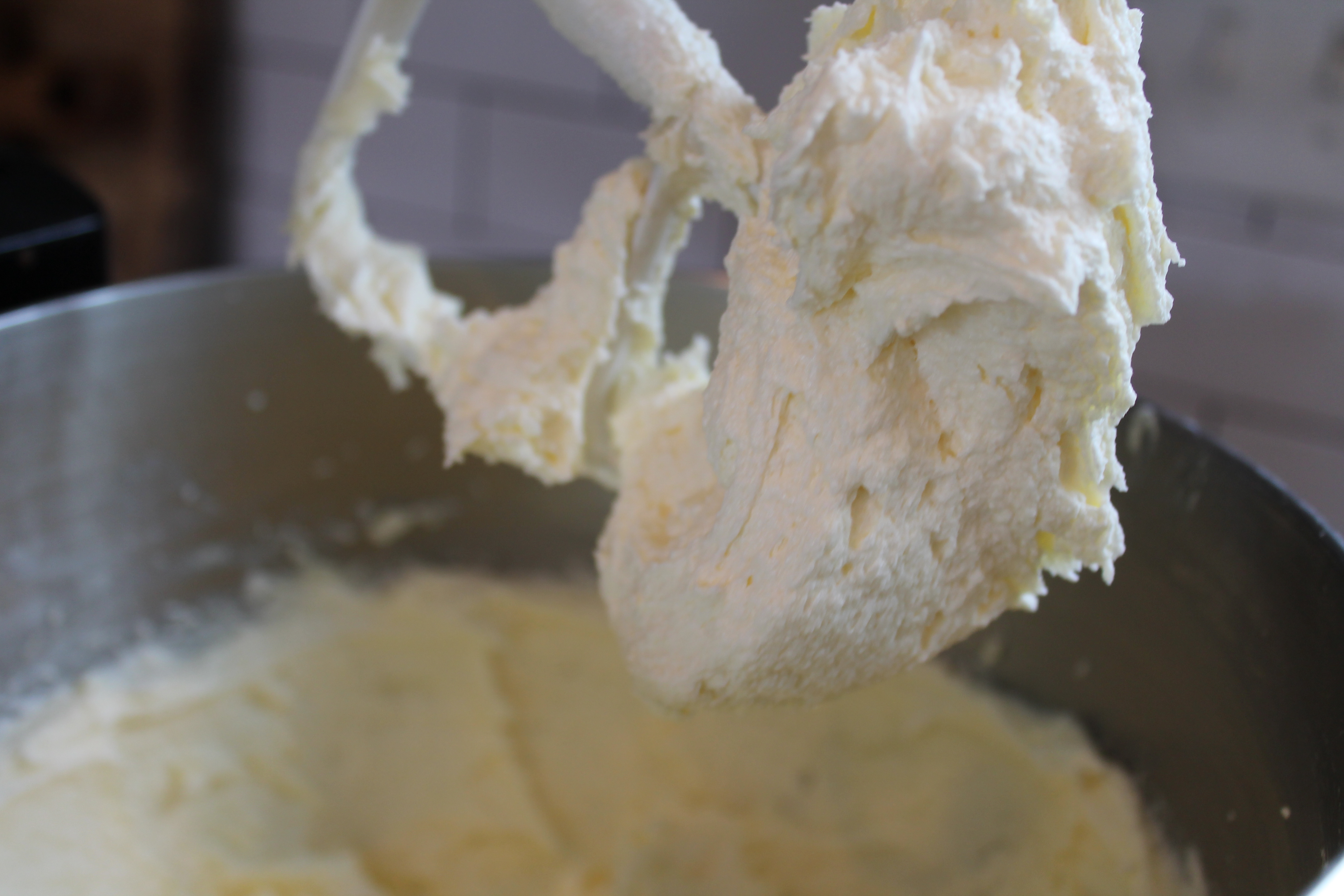 Add the eggs, one at a time, mixing well and scraping the bowl thoroughly in between each egg.

After all the eggs are in and the mixture is even, crank up the speed on your mixer and beat for 2 minutes to aerate. The butter mixture should become very soft and fluffy. 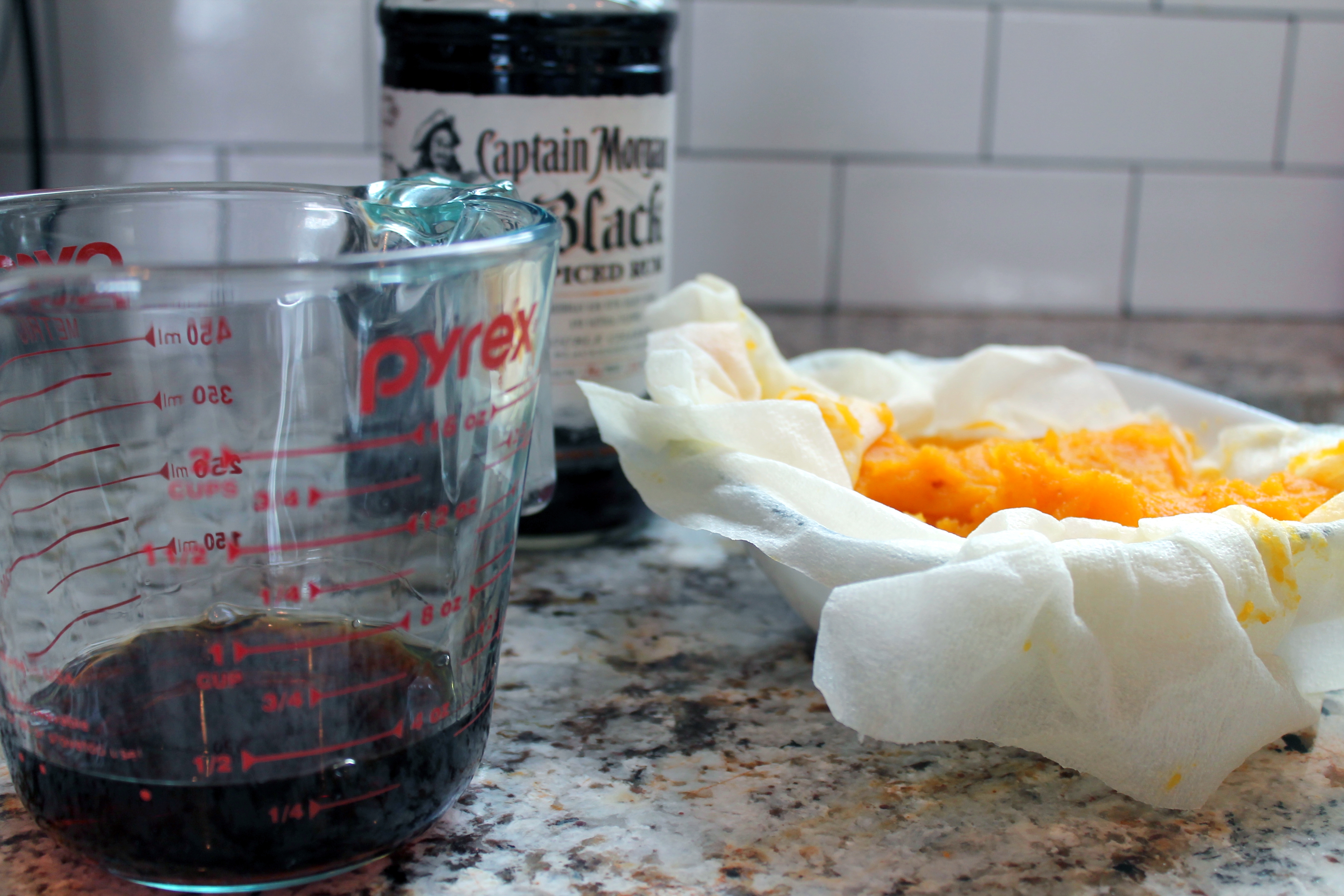 In a separate bowl, make some drunken pumpkin.

Here’s the thing about pumpkin: it’s pretty wet. This makes it a great substitution for milk in quickbreads, but if it’s too wet, it can make a cake rather soggy and dense. Every pumpkin is different, and sometimes water is actually added to roasted pumpkin during the puree process to help it become nice and smooth.

I recommend blotting your pumpkin before adding it to this recipe, especially since we will have the added liquid from the spiced rum! This is very easy: simply line a bowl with a large paper towel and scrape the pumpkin into the bowl. Wrap the towel around the top of the mount of pumpkin and press very gently, so that the towel absorbs the excess liquid from the top and bottom of the pumpkin. You don’t need to wring it or squeeze it because we aren’t trying to remove all of the moisture entirely, but allow the paper towel to absorb what it can in the space of a few minutes. (If you find that your pumpkin already seems rather dry, then you can skip this step!) 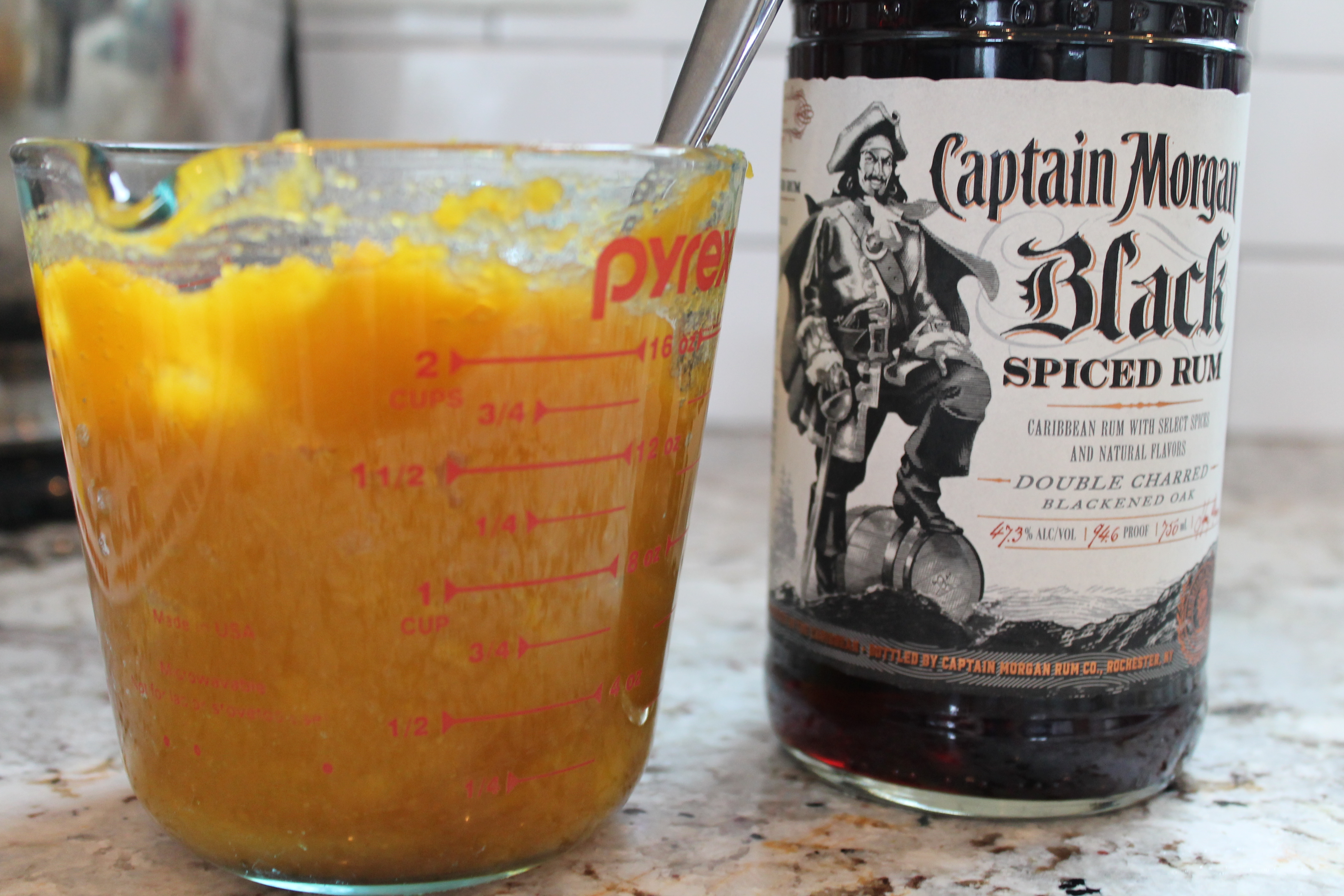 Once you’ve blotted the excess moisture from the pumpkin, transfer it to a small bowl or measuring cup and stir in the spiced rum.

Side note: If you are really desperate for some straight-up pumpkin bread, feel free to ignore the process I used above and add all of the wet ingredients to your bowl at the same time, mixing until incorporated. This will result in a classic (drunken) pumpkin bread, which you can bake as 2 loaves or 18-24 muffins.

Next, we mix together all of the dry ingredients: flour, baking powder, salt, and a bevy of warm spices. Use a whisk and make sure to mix everything well. 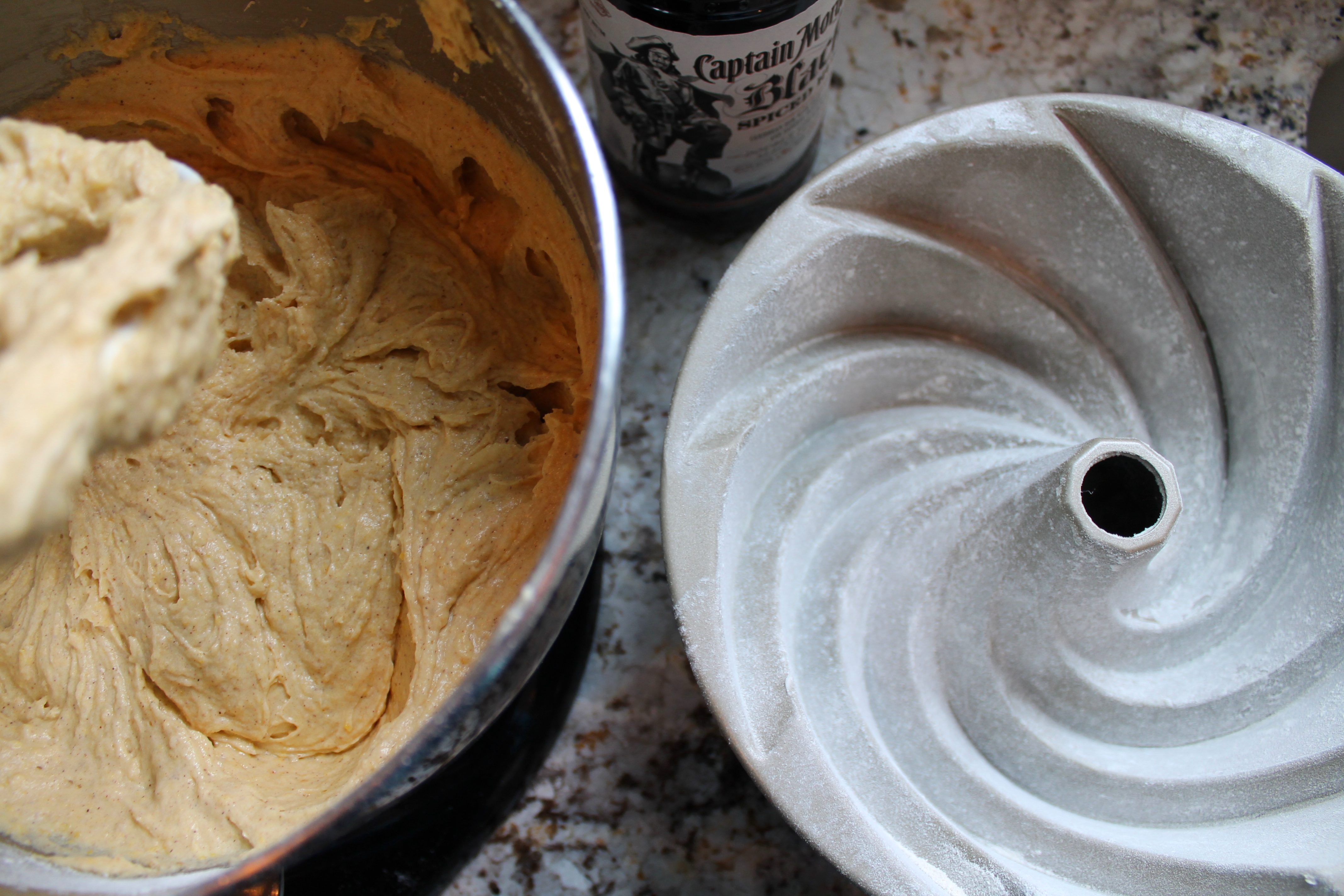 We will alternate adding the flour mixture with the drunken pumpkin. Start with a third or so of the flour and stir it into the buttery base. Scrape the sides of the bowl.

Add half of the drunken pumpkin and mix, scraping the sides of the bowl. Repeat these steps for a total of five additions, starting and ending with the flour. Make sure to scrape the sides and bottom of the bowl well so that everything is mixed evenly.

Now grab a 10-cup Bundt pan. Grease it very thoroughly, paying special attention to all the nooks and crannies. Flour the entire pan lightly. (I recently read that the flour on top of the grease gives the cake batter something to hold on to as it rises, helping the cake to achieve height and light texture!) 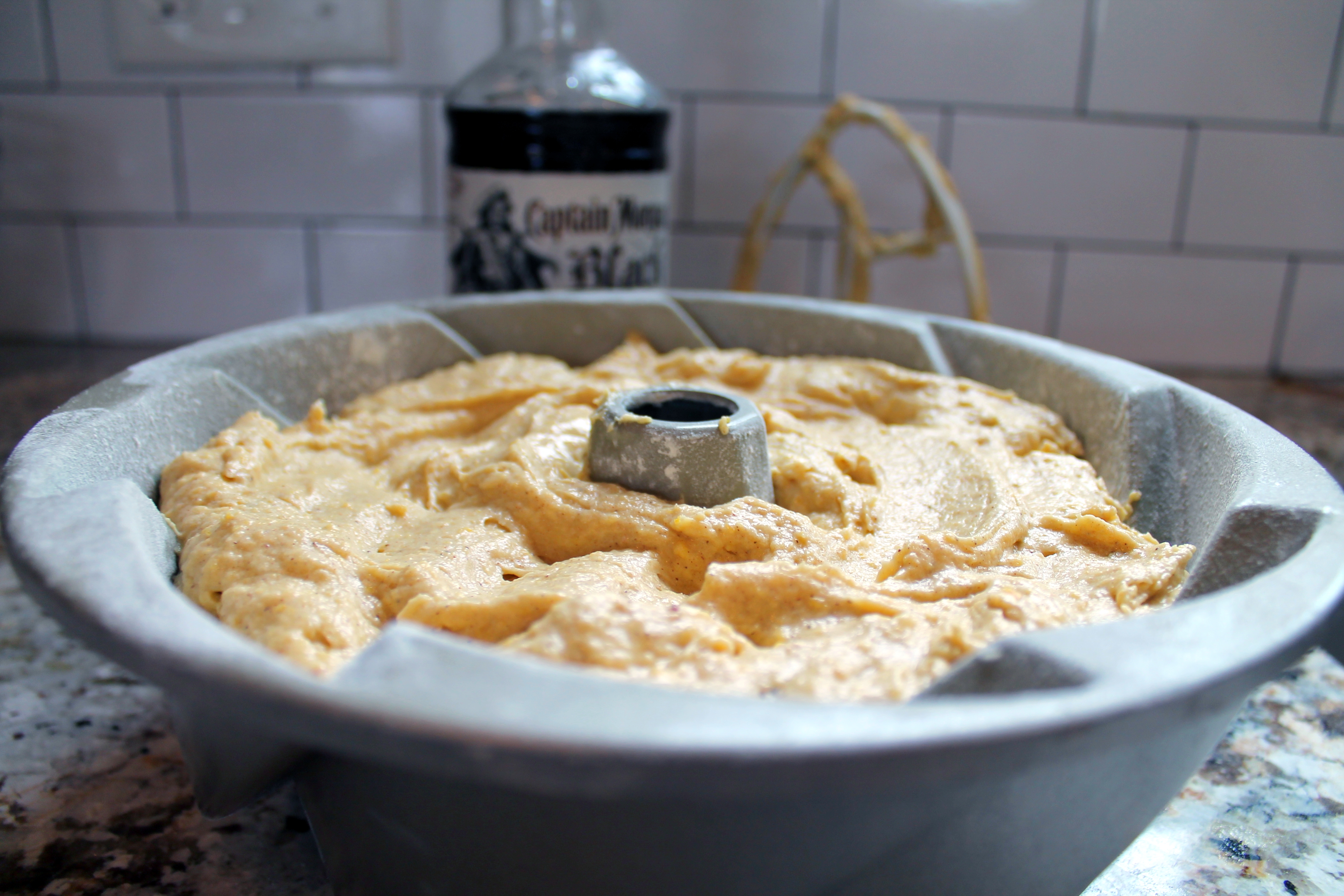 Spoon the drunken pumpkin batter into the pan. Use a spatula to spread the top into an even layer. You can also drop the pan onto the counter a few times to release air bubbles, if you are so inclined. 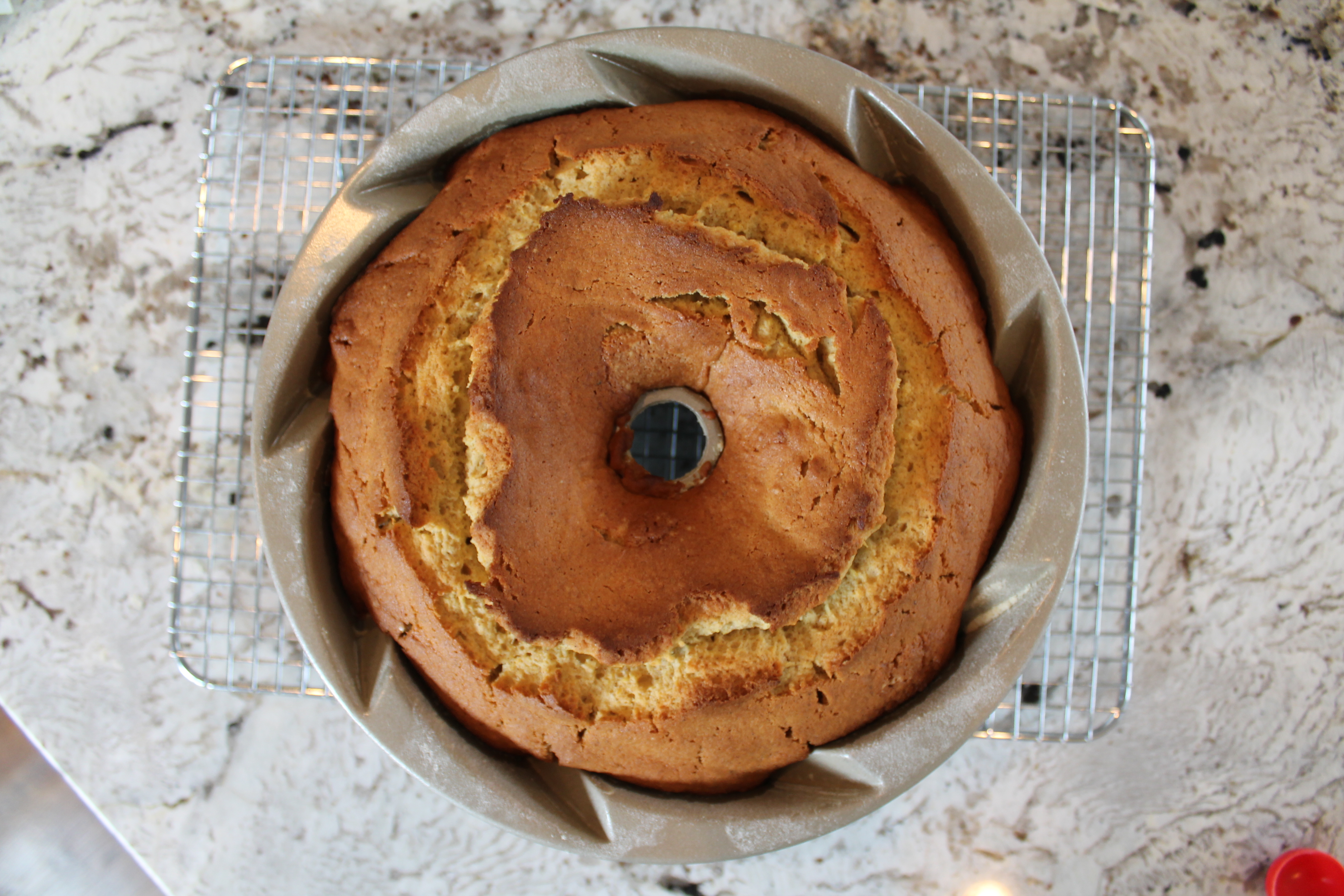 Bake for 60–75 minutes at 350°. Mine was done at 70 minutes, at which point I subjected it to several toothpick tests. The toothpick should always come out clean, and the top of the cake should spring back if you gently press it. 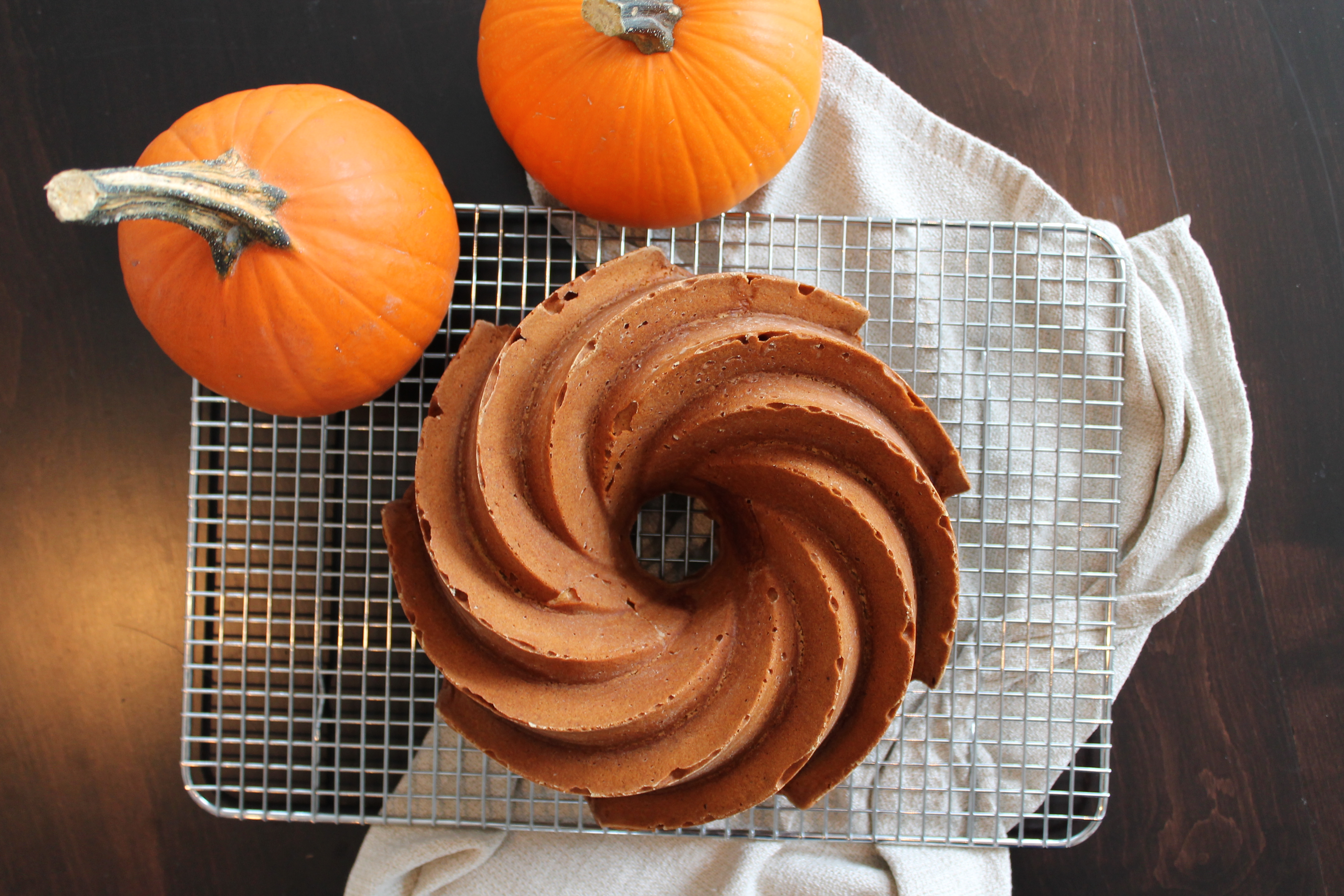 Allow the cake to cool for 10 minutes in the pan before turning it very carefully out onto a wire rack to finish cooling. 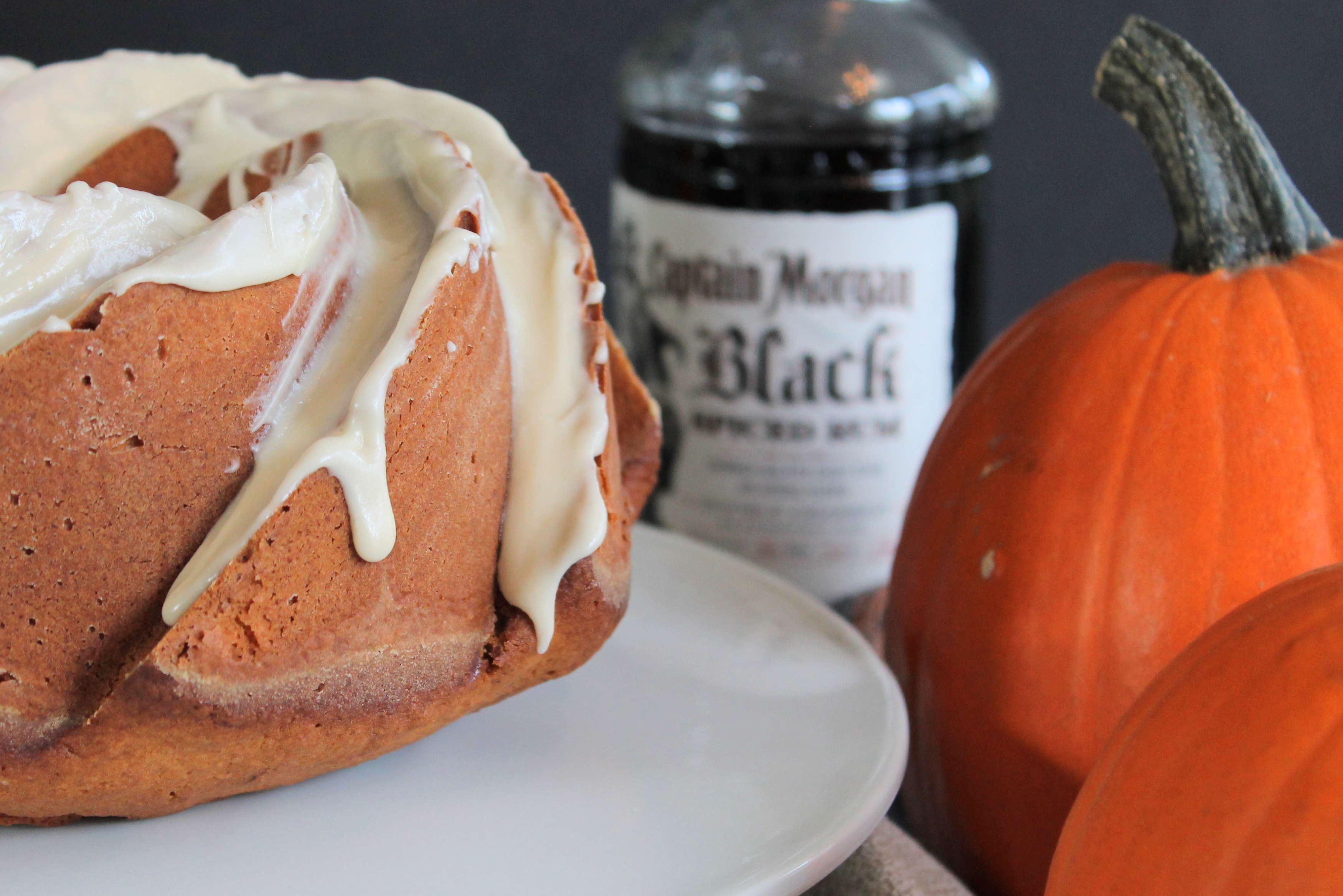 When the cake is completely cool, it is ready for a drunken glaze! Melt 3 tbsp. butter and stir in the confectioner’s sugar as best you can. It will be super thick, but it will thin out as you add the rum, and there will be fewer lumps than when you start with a soupy liquid and add the sugar later! Stir in th rum about 1 tbsp. at a time, until the glaze is thick but pourable. (I stopped after 2 tbsp., but it was still quite thick when I was pouring it, so next time I would go for 2½-3 tbsp. rum.)

Pour the glaze carefully over the cake, allow it to drip down the sides. Let the glaze set completely (about 20 minutes) before cutting into the cake.

heavily adapted from Little Bit of Everything
serves 12–16

Directions:
Preheat oven to 350°. Very thoroughly grease and flour a 10-cup Bundt pan.
Cream the butter and sugar together until pale and stiff. Add the eggs, one at a time, mixing well and scraping the sides and bottom of the bowl between each addition. After incorporating the last egg, beat the butter mixture on high speed for 2 minutes to aerate.
In a small bowl, blot the pumpkin dry with a paper towel. Do not wring the pumpkin, just blot to absorb any excess liquid. Stir in the spiced rum and set aside.
In a large bowl, whisk together the flour, baking powder, salt, and spices.
Alternate mixing into the cake batter one-third of the the flour mixture and one-half of the pumpkin, starting and ending with the flour mixture. Stir on low speed until combined and scrape the sides of the bowl after each addition.
Spoon the batter into the prepared Bundt pan.
Bake for 60–75 minutes, until the cake is set in the center, springs back when lightly pressed in the middle, and can pass a toothpick test in three locations around the tube.
Cool for 10 minutes in the pan, then turn out carefully onto a wire rack to cool completely.