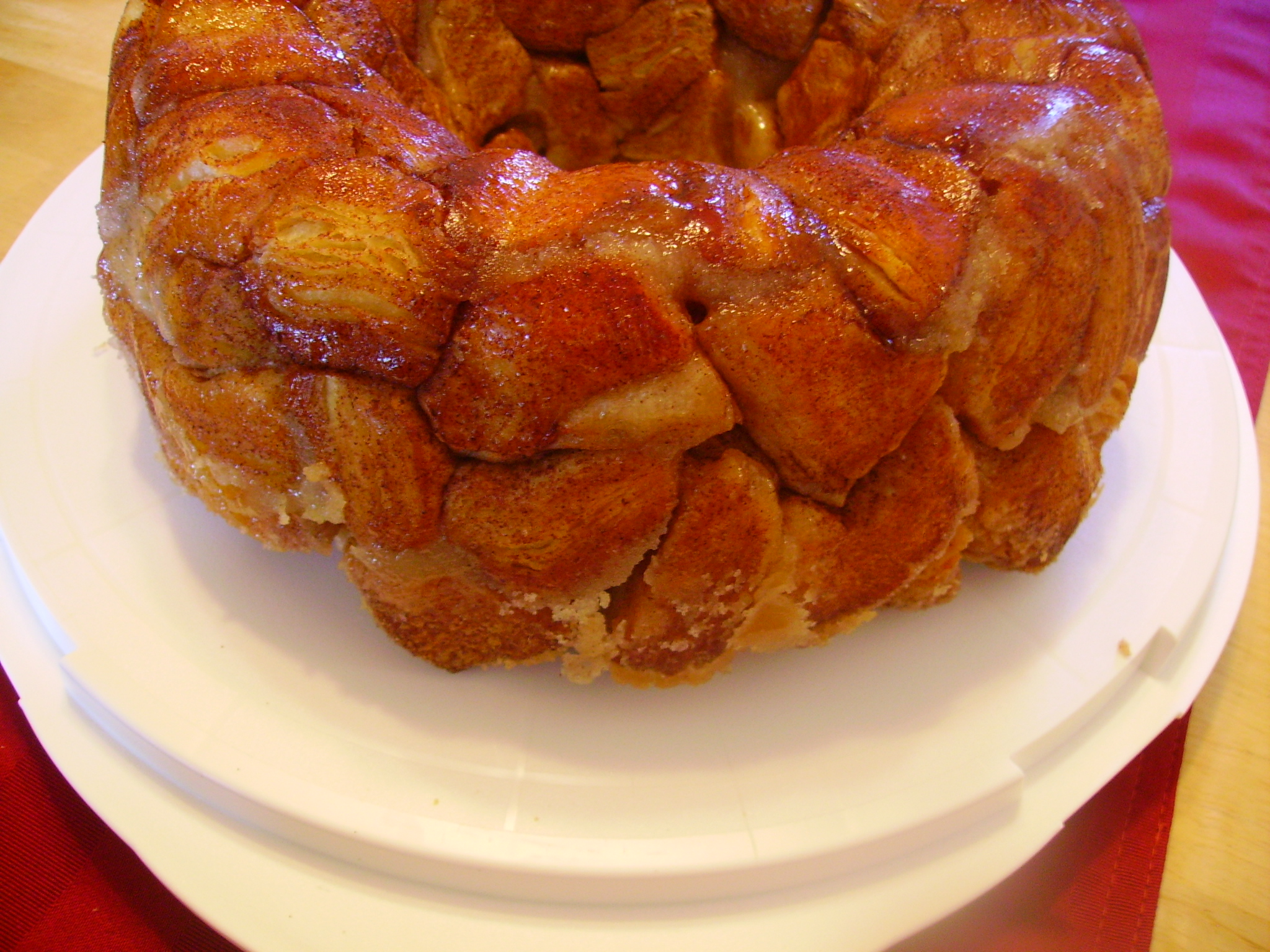 How many different ways can I convince myself that cake is an excellent breakfast food?

It would really be impossible to count…

The first time I had monkey bread was at a “cookout” breakfast at Camp Hanover. I’m not actually sure how we managed this without a proper oven…but I was only 8, so cooking was a bit beyond me at the time. For all I know, we picked the gooey cake up at the kitchen and the only “cooking” that happened that morning was slicing fruit into bite-size chunks.

When I got home from my week away, I begged my mother to make this sugary, delightful butter bomb at home, and she happily agreed. Monkey bread actually turned out to be one of my brother’s favorite treats, while I moved on to even less healthy breakfasts like chocolate chip pancakes covered with mountains of whipped cream…yum. But I still love monkey bread!

One of the greatest attributes of monkey bread is that it requires very little effort. Chop up a bunch of peel-apart biscuits, shake them in a cinnamon and sugar mixture, and drench in butter! Perfect. Plus, it makes a great cake to share with friends. If you’ve never make this, I know you’ll be glad when you do. 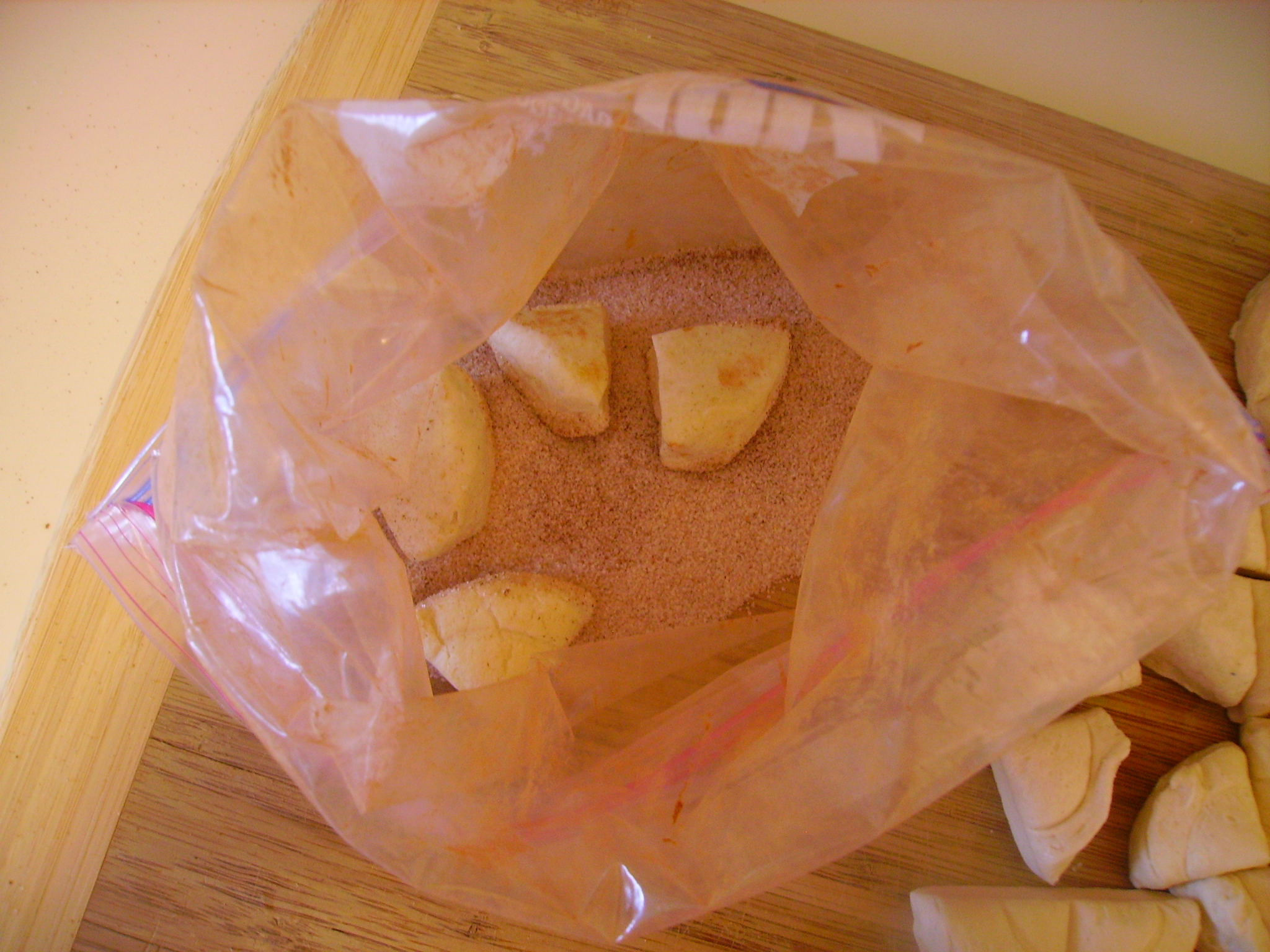 Start with 30 peel-apart biscuits. Go for the regular buttermilk variety rather than anything called “butter flavor” or “extra flaky.” I also recommend regular size rather than jumbo. Cut the biscuits into quarters.

Combine ⅓ cup sugar and half cinnamon in a large Ziploc bag. Drop the biscuit pieces into the bag, a few at a time, and shake until completely coated. When necessary, add the remaining ⅓ cup sugar and cinnamon to the bag. The reason I like to add the cinnamon and sugar in batches is that the cinnamon is finer than the sugar, and thus the first pieces will be more heavily coated with cinnamon; mixing the two in batches allows the biscuits to be more evenly coated with both cinnamon and sugar. 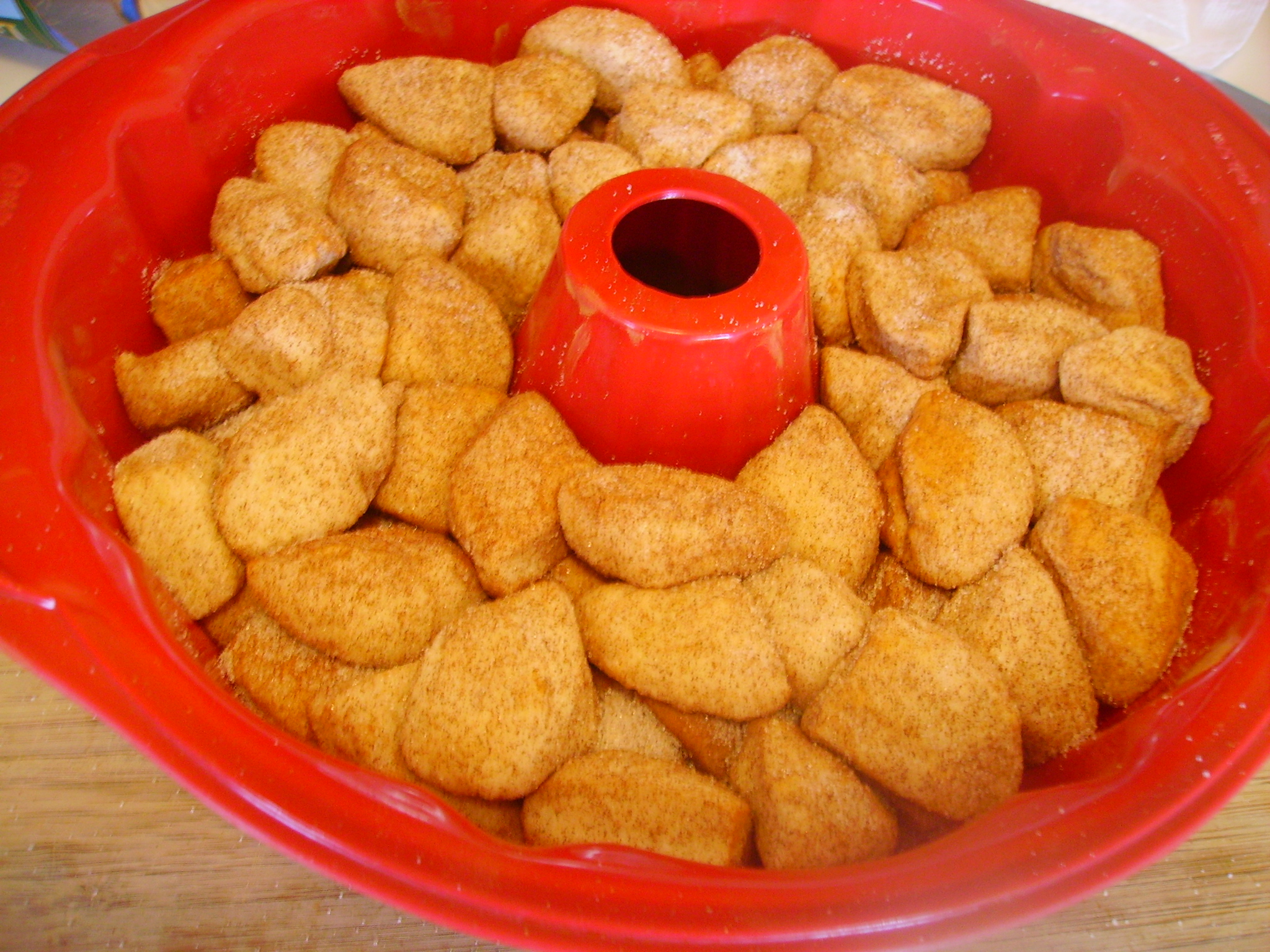 Place the sugary biscuits into a well greased Bundt pan. Don’t press them down, just distribute them evenly. 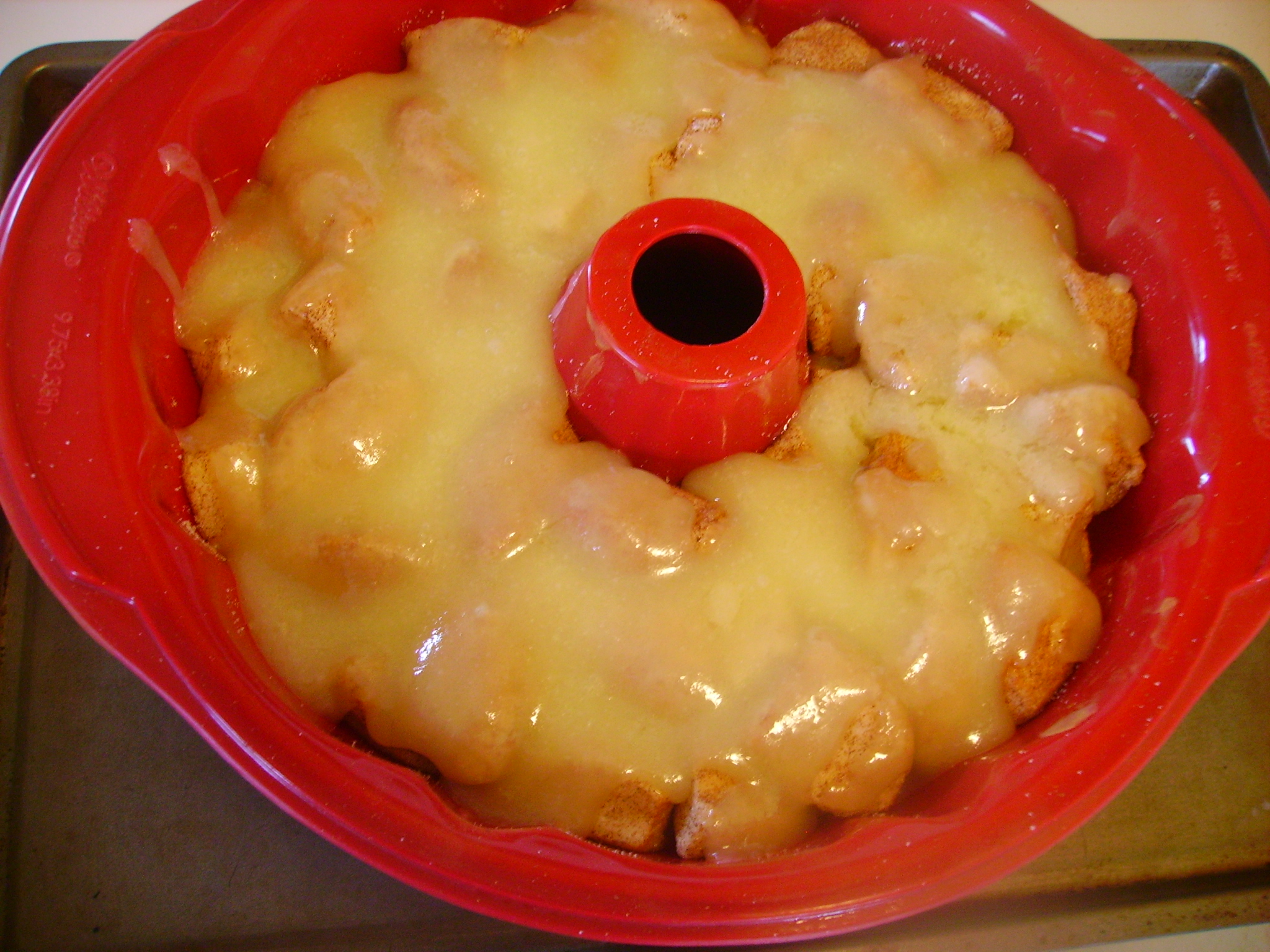 Melt the butter (or margarine) with the remaining sugar and bring to a boil. Pour the bubbling mixture over the biscuits in the Bundt pan.

My mom has determined that margarine actually works better in this recipe—shocking, I know. But I can attest that every monkey bread she ever made us was saucy and flavorful, and the biscuits baked up fluffy and delightful. I, personally, used butter, because I don’t keep margarine in the house. I still enjoyed the monkey bread, but I do wonder whether it would have been even better if I’d used margarine. 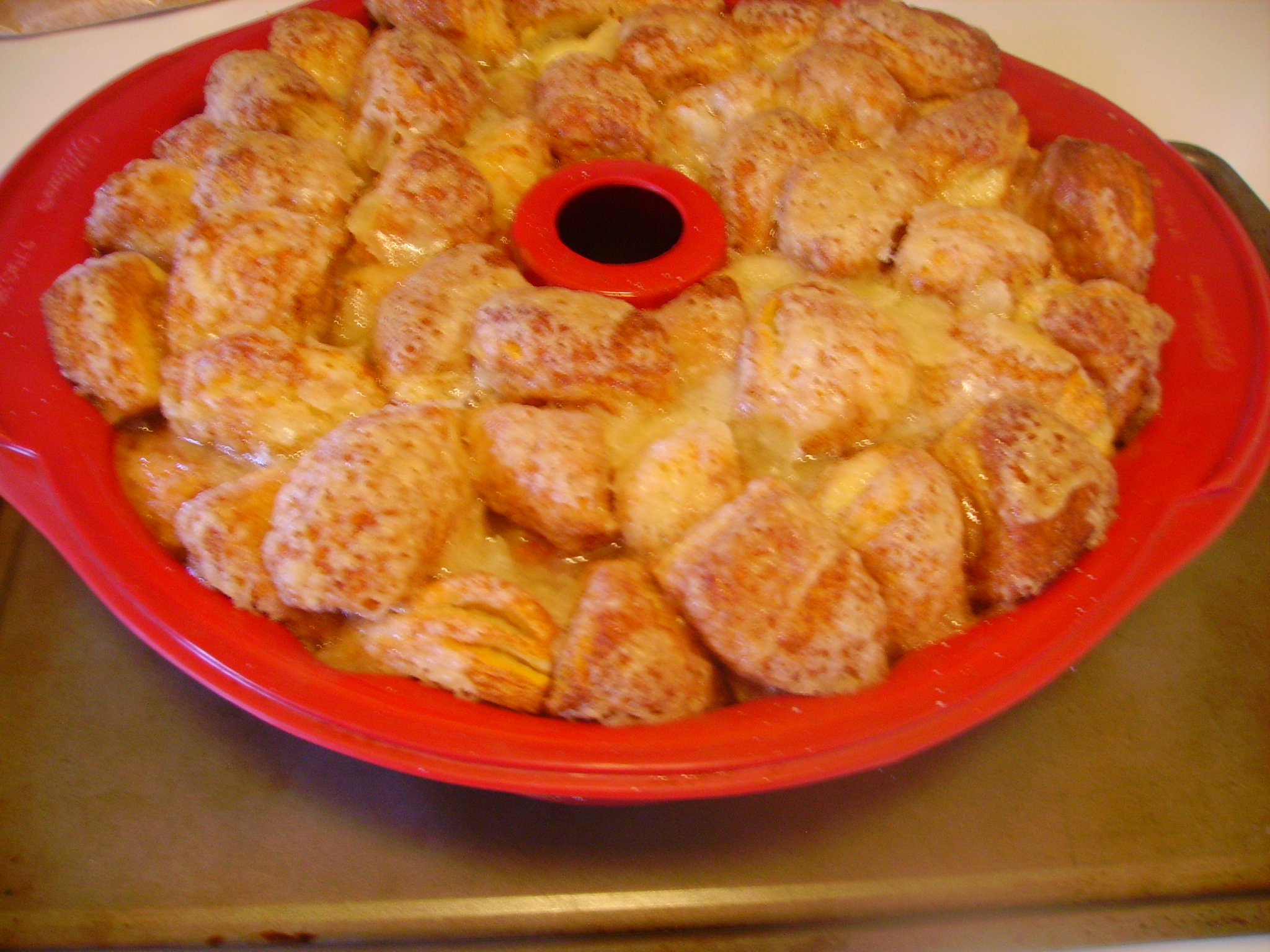 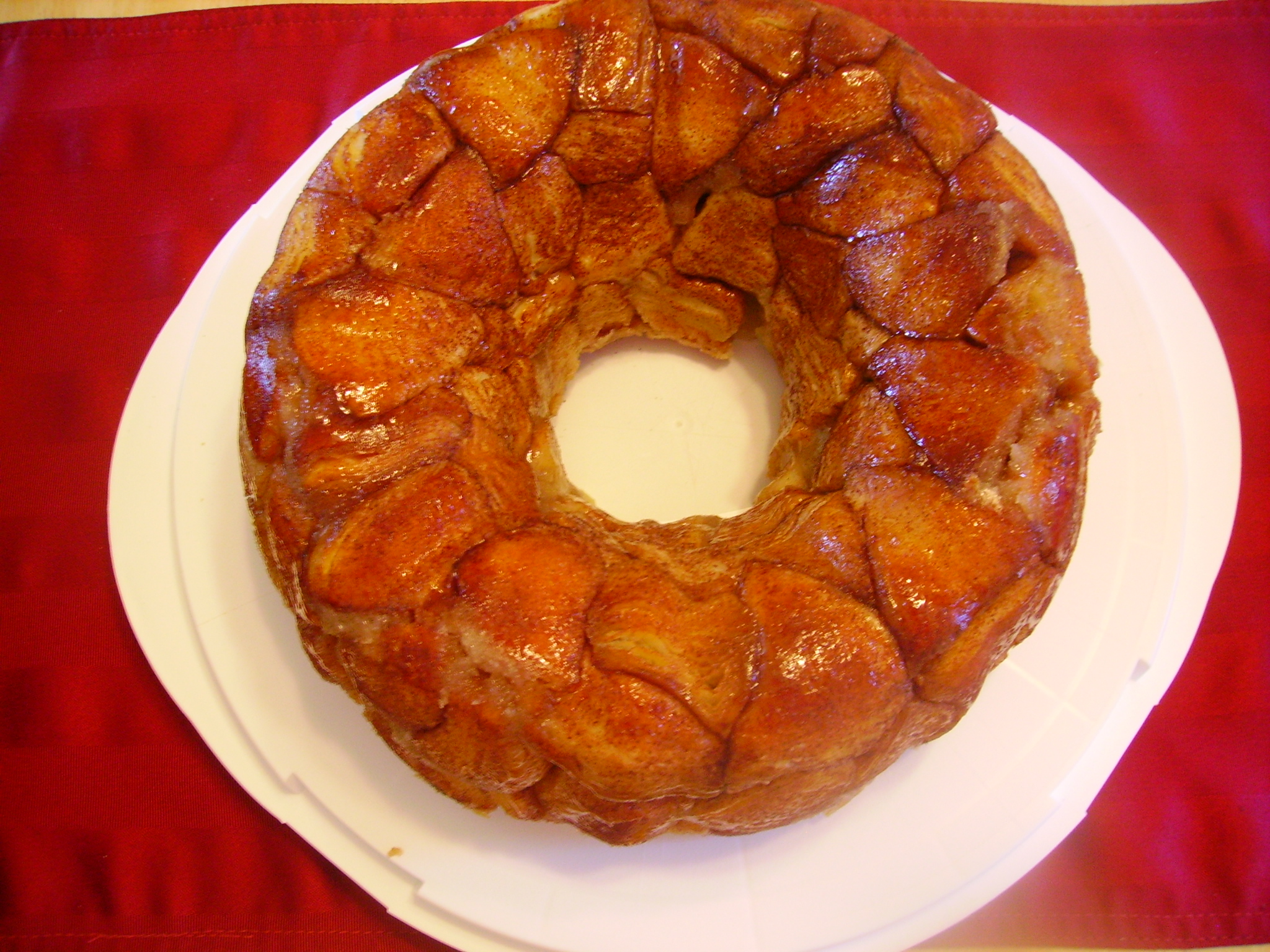 Let the cake cool before inverting onto a serving platter or cake carrier. Use forks to pull the pieces apart, rather than slicing with a knife.

Directions:
Preheat oven to 350°.
Mix cinnamon and ⅔ cup sugar. Put a few pieces at a time into a Ziploc bag and shake until they are well coated. Press lightly into a well-greased Bundt pan.
Place butter and ⅔ cup sugar in saucepan. Bring to a boil. Pour over biscuit pieces.
Bake 30 minutes.
When cool enough to eat, invert onto a serving plate.