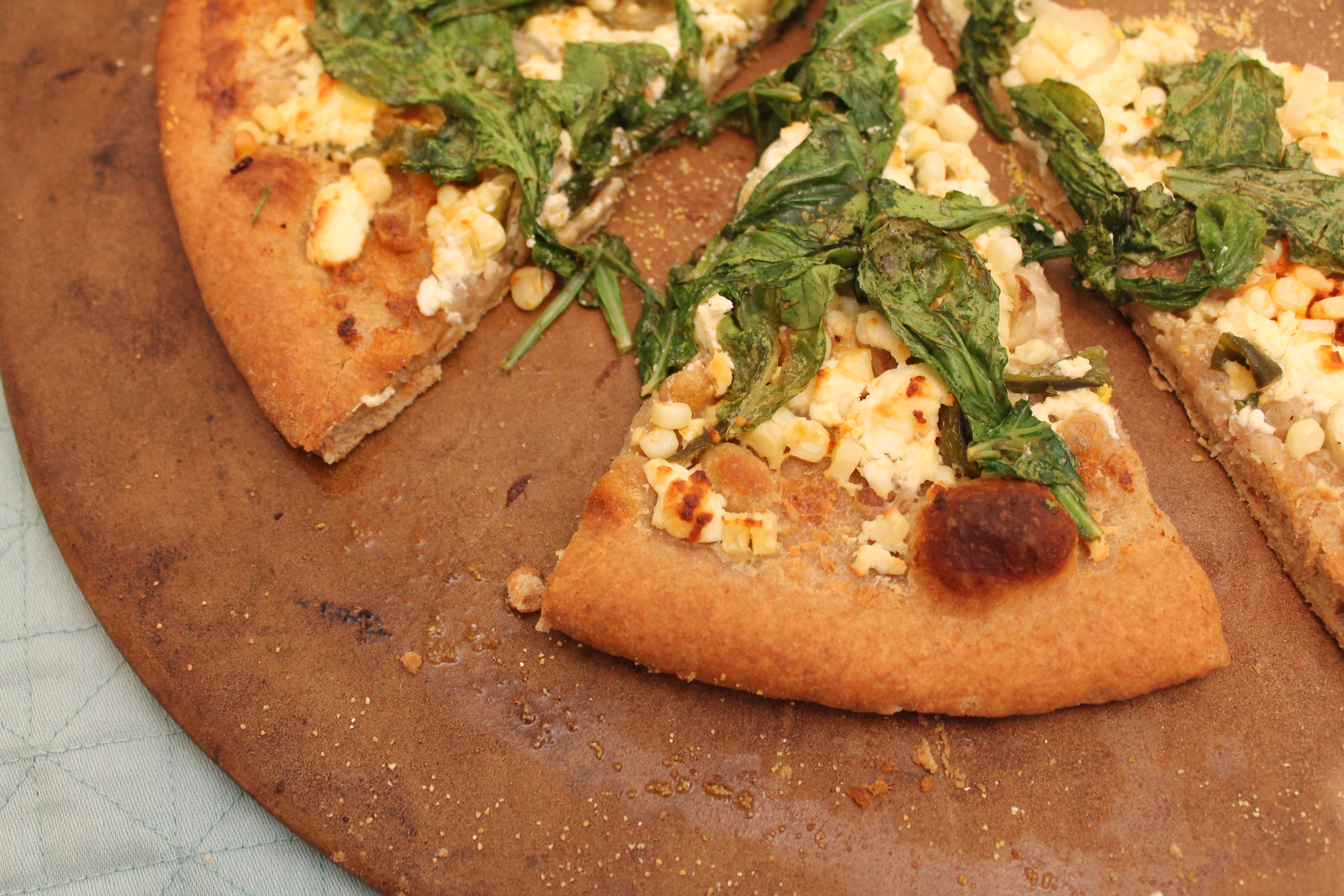 And lo and behold, I also got a poblano in my box this week (along with several ears of corn, a watermelon, potatoes, grapes, several beautiful tomatoes, and a cucumber). It was a perfect storm of amazing, because I have been waiting to share this pizza recipe with you all summer.

Oh my gosh, this pizza is so delicious. It’s a little spicy from the poblano and the smoked paprika. It has this amazing south-of-the-border flair from the cilantro and lime in the salad on top. But also a delicious sweetness from the corn, and a tang from the goat cheese…

I could make this again and again. And if you are your tastebuds are chummy, then so will you! 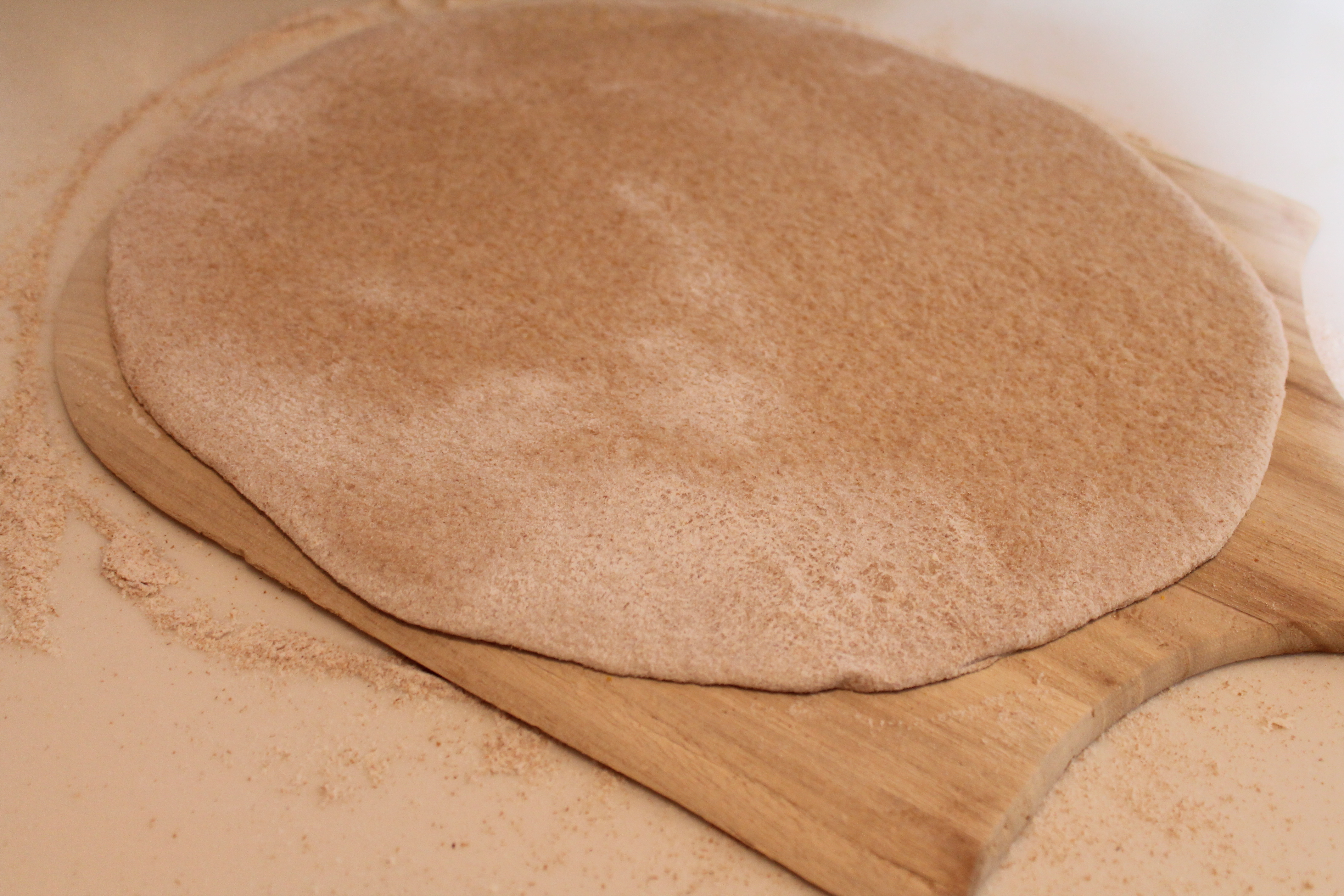 My favorite pizza dough is this one, made with half whole wheat flour and half all purpose. It’s lightly wheaty but still provides a neutral (and nutritious!) backdrop to any toppings you throw its way. You need about one pound of dough per pizza, which is a half recipe of the light wheat crust. 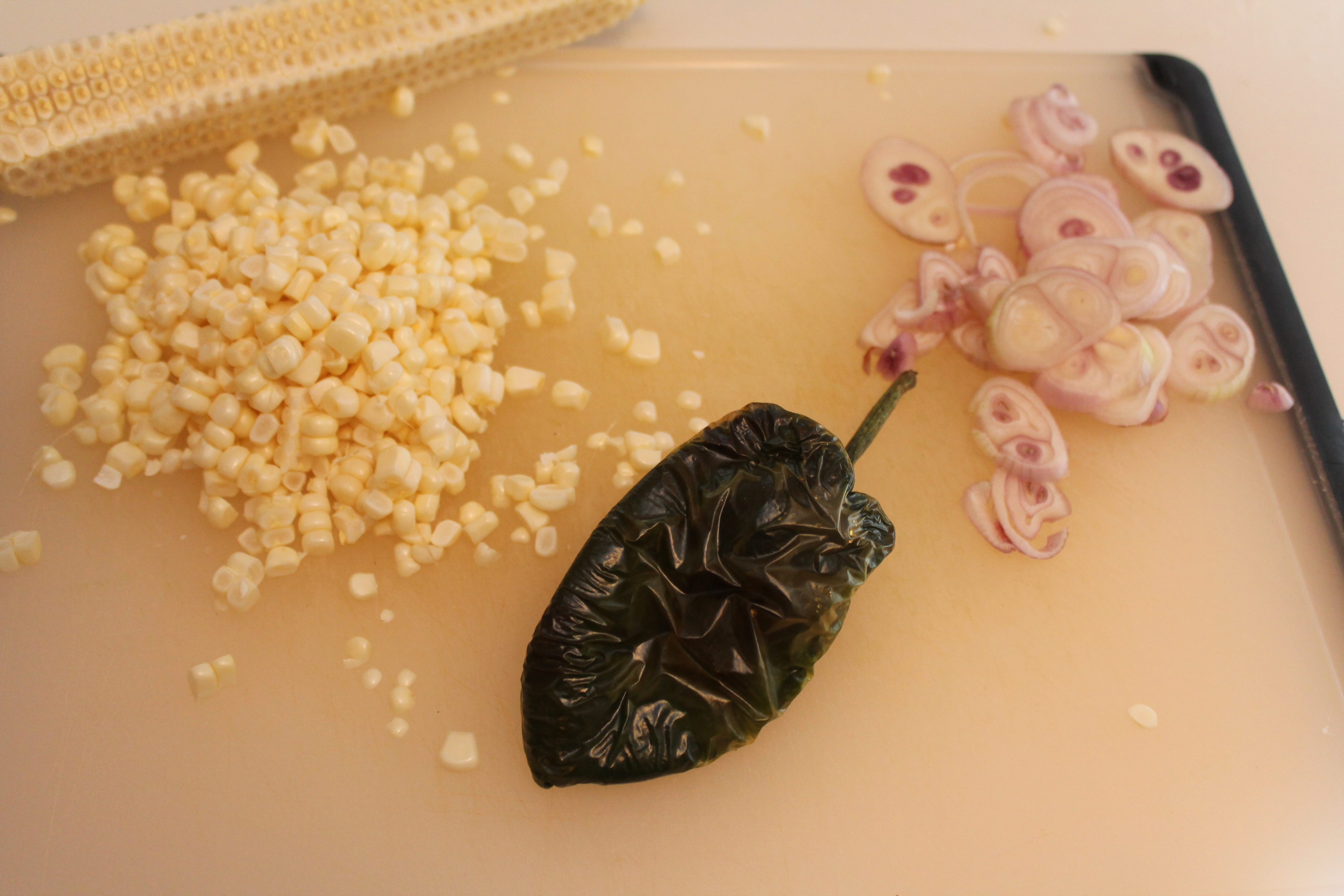 While your crust is on its second rise, prep the pizza toppings. Roast your pepper, either over the open flame of your gas stove, if you are blessed enough to have one, or in the broiler, turning every 3 minutes or so. When the skin of the pepper is blistered and blackened, pull it off the heat and set it on a plate. Cover with plastic wrap and let it cool down for 10 minutes.

Meanwhile, cut the corn off the cob and slice the shallot.

Peel the skin off the poblano. Scrape out the seeds and cut the pepper into long strips. 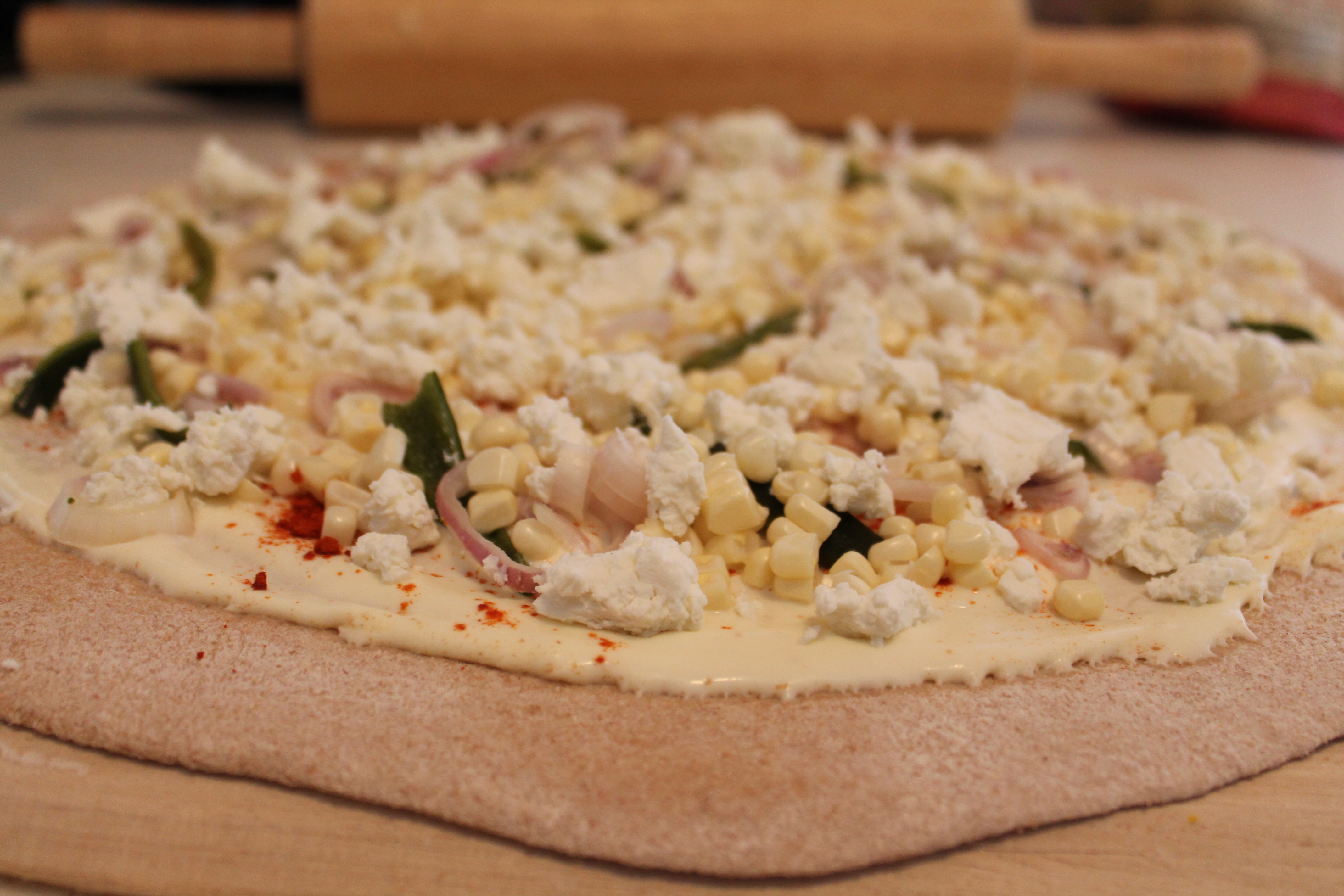 Roll out the pizza dough into a large round. Spread sour cream over the surface as you would a pizza sauce. Sprinkle liberally with smoked paprika.

If you have never tried smoked paprika, I highly recommend you rectify that situation! It is so deliciously spicy and smoky…it’s about a million times tastier than plain paprika. Don’t think. Just get some and generously season this pizza with it!

Layer on about half of the goat cheese, then top with sliced shallots, poblanos, and corn. Crumble the remaining cheese over the pizza. 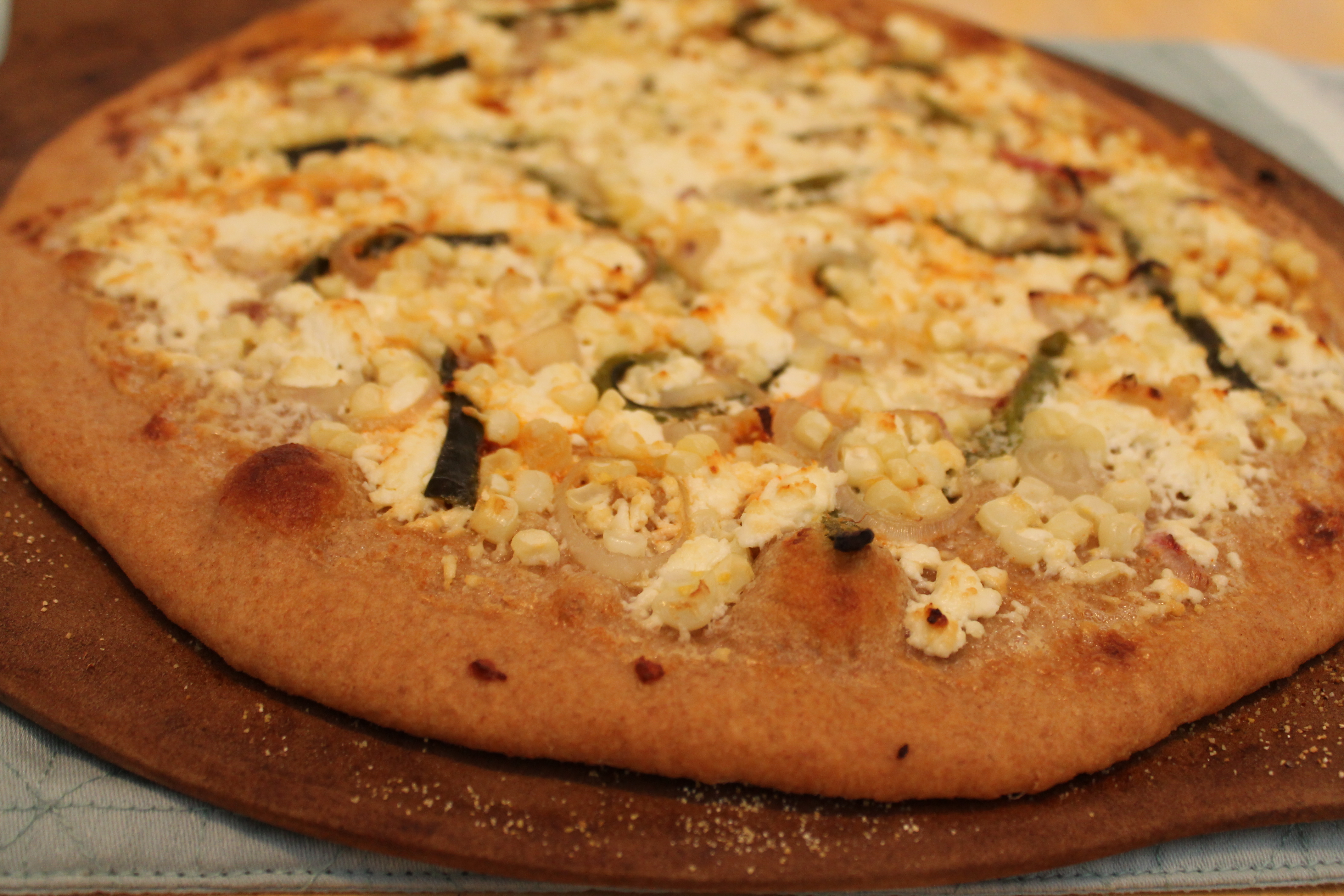 Bake for 12 minutes at 500°, until browned and slightly bubbly. 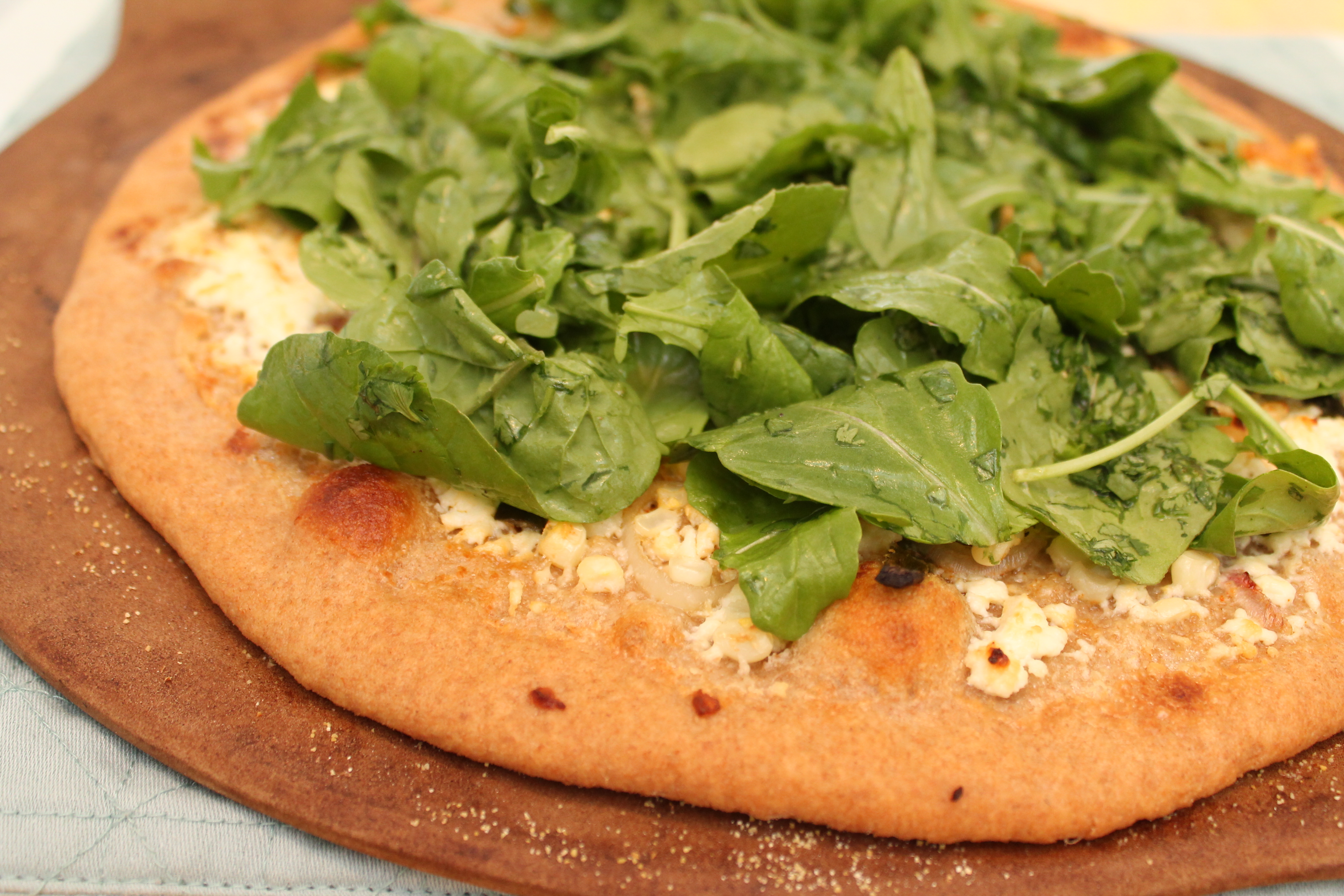 Layer the salad on top of the baked pizza. I like to turn the oven off and stick the pizza back in for 2 minutes to wilt the greens. If you want your greens to be crunchier, you don’t have to do that, but they may have trouble staying put on top of the pizza unless they are wilted! 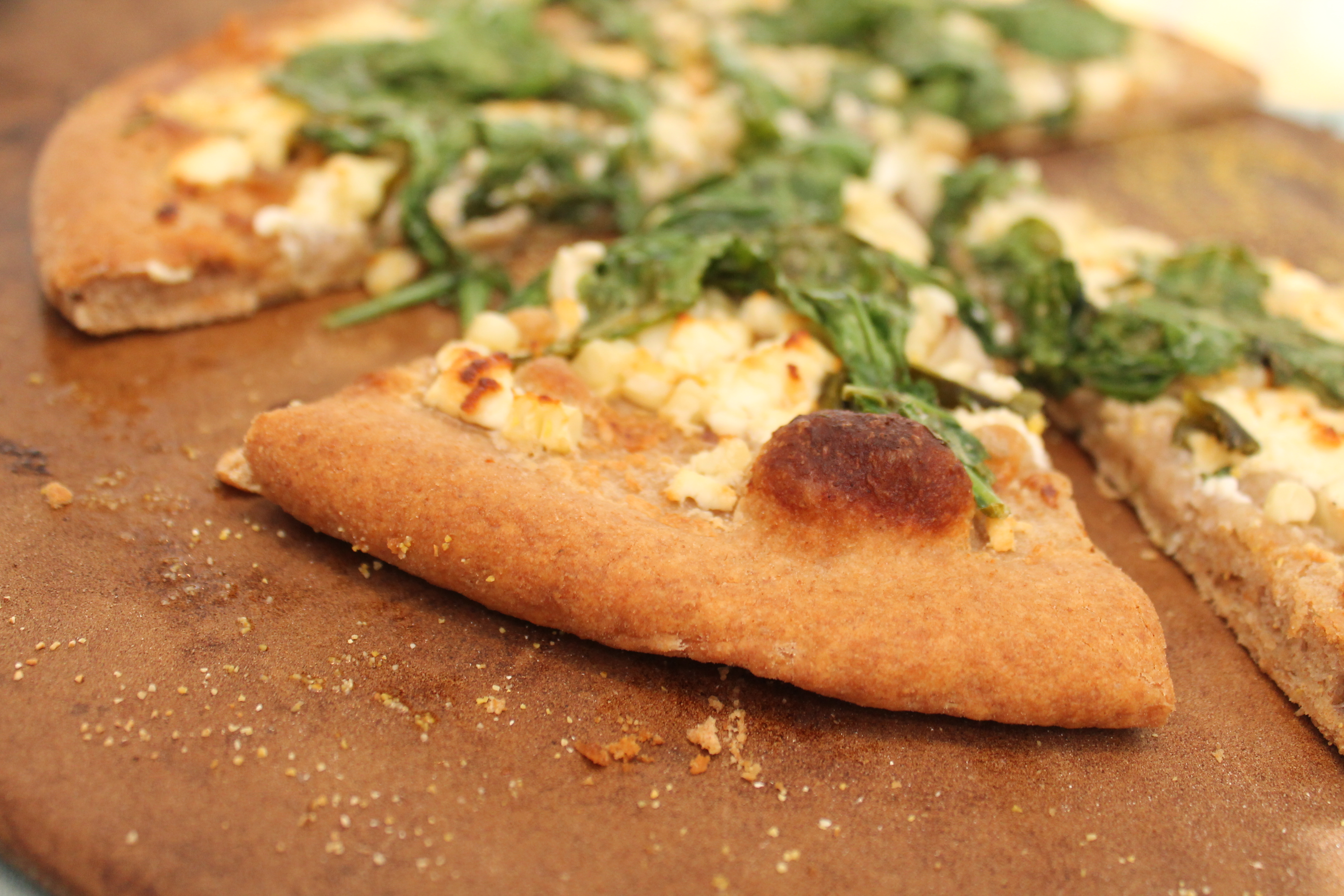 Directions:
Prepare the dough according to instructions.
Preheat the oven to 500°. Set a baking stone in the oven to heat.
When the dough is ready, roll it out into a 14″ circle. Set it on a cornmeal-covered pizza peel.
Spread the sour cream across the top of the crust, leaving a ½″ edge. Sprinkle with smoked paprika to taste. Distribute half the goat cheese, the poblanos, shallots, corn and the rest of the goat cheese.
Bake in the upper third of the oven for 12-15 minutes, until the top browns.
Meanwhile, toss together the arugula, olive oil, lime juice, and salt.
Remove the pizza from the oven. Top with salad greens and return to the oven for 1 minute to wilt the salad.
Let the pizza cool about 5 minutes before serving. 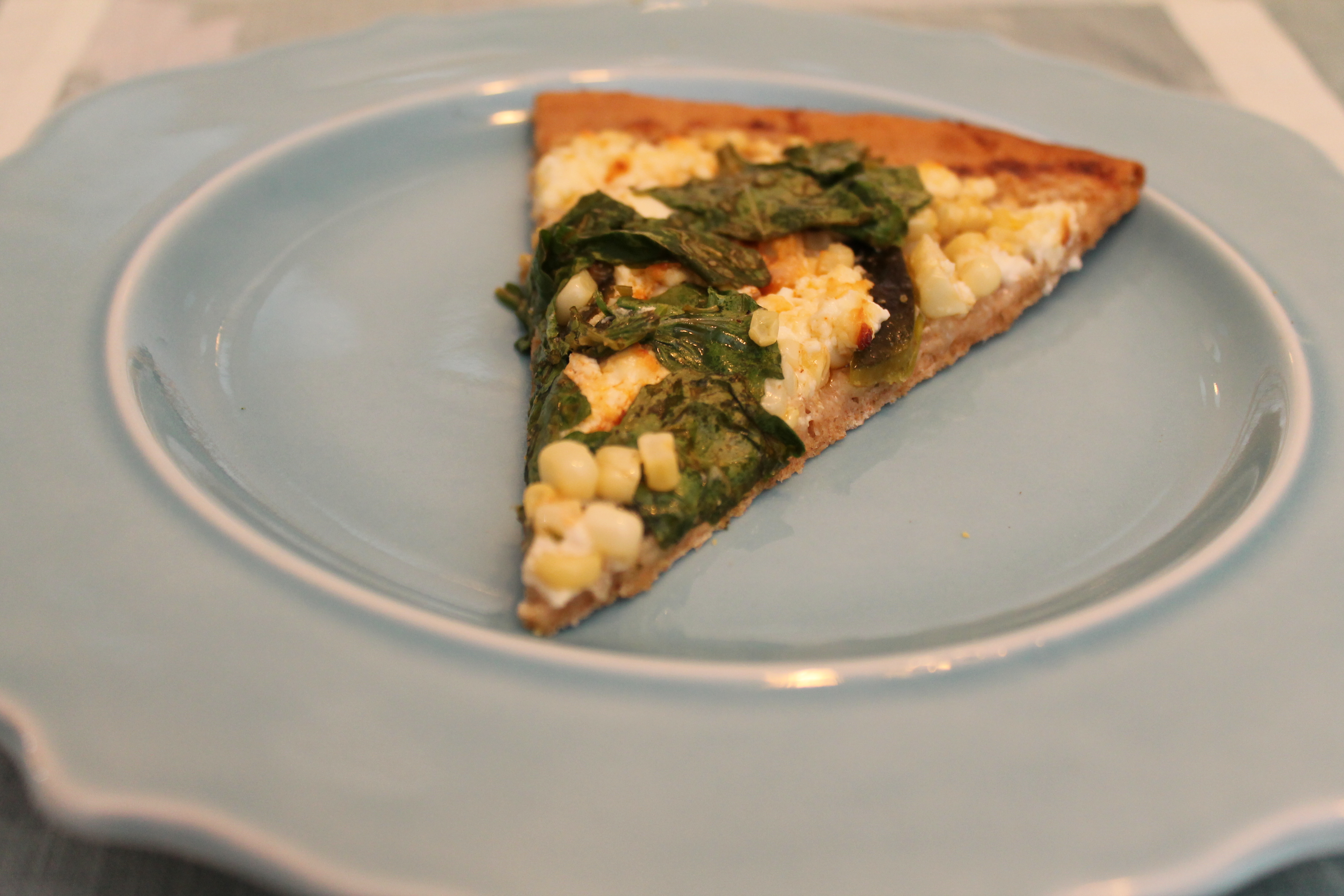 Has one comment to “CSA Week 11: Corn and Poblano Pizza”