After 20 weeks of fresh, seasonal produce, CSA has come to a close for the year.

As I reflected on the experience—what I ate, what I didn’t, what I learned, and what I wished I had known—I thought it might be worthwhile to share my overall impressions of being a CSA member with you.

So if you are asking yourself the question, “Should I join a CSA?” then I hope I can help you understand what the experience might be like!

Okay, I think this is a fairly comprehensive list of all the produce we received through our CSA! Just to give an idea of the variety…

When I got started with the CSA membership, I was eagerly anticipating trying new foods. I am a fairly picky eater, but as a vegetarian, produce is my domain! The only actual new food I received was garlic scapes! And they were delicious. I made a yummy vinaigrette (oh, and a not-so-yummy barley dish…note to self, garlic scapes are very tough and require special treatment).

But even though the vast majority of the foods that came through the door were familiar, I was definitely forced to branch out and step out of my comfort zone during this CSA season. For example: I hate cucumbers. But we got 18 of them. Yep, that’s a lot of cucumbers! I am also not a huge fan of green beans, but we received 5 bags full. And I discovered some good green bean dishes—without ever resorting to green bean casserole (yes, I did grow up in the South, but I have just never quite understood casseroles. Feel free to help me change my mind). 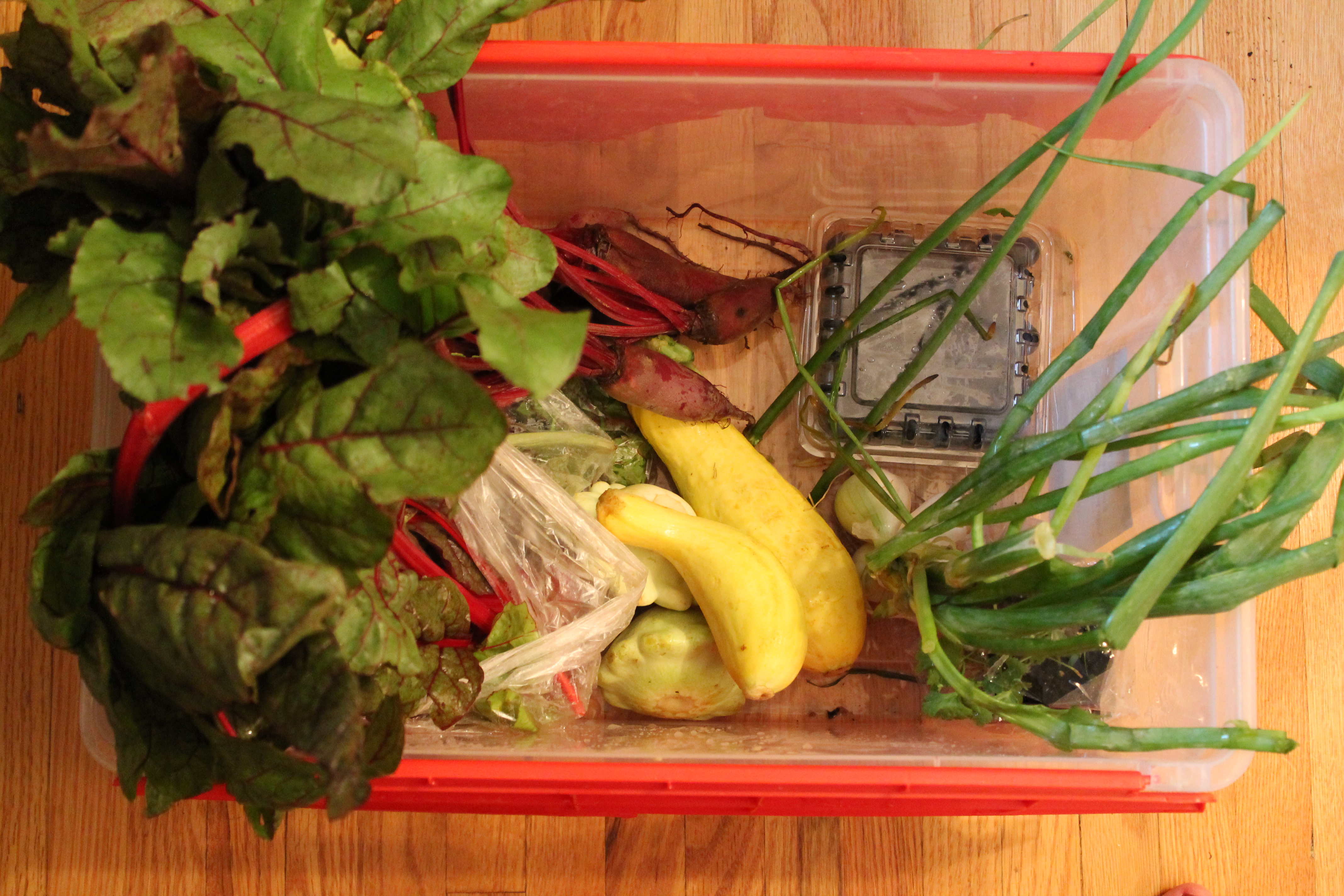 When I first signed up for the CSA, I had no qualms about receiving a box of veggies and fruits each week. Normally, when I go to the grocery store, my cart is half full of veggies anyway! So this would just be like transferring the source of said veg to a fresh, local farm, right?

First of all, after about week 3, I began falling behind a bit. Even though I love trying new things, I often struggled to figure out how to use the ingredients together. Sure, it would have been easy to throw everything together in a pot and make stir-fry or curry—which definitely happened more than once. But, maybe partly because of the blogging, I wanted to make carefully planned dishes that would highlight some of the produce well. I wanted to write about things it would be practical to try to reproduce even if you weren’t staring at the same CSA box I was. That often meant that I was focusing on one ingredient at a time…and funny enough, my grocery bills were about the same as they had always been, despite the influx of CSA produce, because I was now purchasing special ingredients in pursuit of using up the CSA produce.

Maybe that was my bad. A pitfall of being a food blogger, or a challenge because of how I tend to conceptualize food. I did have a few shining moments where I used up a ton of CSA veggies all in one dish, though, and I hope that if you decide to become a CSA member, you will focus more on making everything work together! In theory, seasonal vegetables should complement each other, and I regret not prioritizing that in my cooking over the last few months.

Just remember, the sheer number of veggies and fruits that fit into a small box can be hard to keep up with. We probably received 80–100 lbs. of food from the farm! So have lots of dinner parties. Bring meals to friends. There is almost no way 2 people can eat through an entire CSA share all by themselves!

What Surprised Me Most

But this CSA threw me for a loop. I realized that my calendar-based boundaries on when certain foods would be best were pretty silly, actually. I was so surprised to be receiving asparagus in June! apples in July! green beans, chard, and lettuce in August! Worse yet, I was astonished not to see a tomato until September. (Maybe you, like me, long for fresh tomatoes all year! By the time they arrived, I was desperate.)

My advice? Throw away your notion of what’s seasonal unless you have already spent tons of time on a farm or eating mainly home-grown food. Each farm focuses its attention differently, and slight variations in climate and soil from farm to farm can make a big difference!

Our farm must have an amazing greenhouse, because we got lettuce even in some of the last shares we brought home! I had told myself at the beginning of the summer to try not to buy things I knew definitely were out of season, even if I could find them in the grocery store. So when I stopped finding leafy greens in the box (also known as, the same time I started to accumulate more veggies than I could easily eat), I was so sad! Imagine my ecstatic joy to find the occasional small head of lettuce nestled in a corner of the box, despite in the high heat of summer.

Other vegetables that our farm provided abundantly include all types of squash, potatoes, green beans, corn, and cucumbers. Almost all of the veggies we received were delicious and super fresh!

I do not like fruit (I know, I know, I’m weird), but the fruits we liked best from the farm were grapes and green apples.

Finally, a wonderful benefit of being a CSA member was all of the activities hosted at the farm! We weren’t able to take as much advantage of them as we had hoped (I blame the baby and his mid-day nap), but the times that we were able to go, we enjoyed picking our own produce, eating delicious homemade donuts, and entering Jake in a diaper derby!

Our biggest disappointment with the CSA share was the fruit. We had chosen this farm specifically because they include fruit in every box. But what we discovered was that most of the fruits we received were very small (think golf ball-size nectarines and peaches) and not very sweet. We had a lot of problems with ripeness: many of the fruits we received just seemed like they had been picked too early, and they sometimes went bad before they ever reached the stage where they were ripe enough to enjoy. (Disclaimer: I don’t like fruit, and I don’t eat fruit. This information was conveyed by my husband, who is definitely a fruit snob.)

As a result, most of the fruits we received either turned into baked goods or went to waste. Alas!

I will say that our box was packed later in the week, toward the end of their packing cycle, and I could definitely see that having an impact on the size and quality of the fruit they were able to include.

A major personal disappointment, however, was with the tomatoes. Tomatoes are my absolute favorite. (Much to my horror, my son literally spits them out every time I try to feed them to him.) My favorite thing in the summer is eating a huge variety of tomatoes, usually on sandwiches with a little bit of spicy mustard and maybe a few thin slices of a nice, Swiss-made cheese. Yum. But our CSA seems to plant only 2 varieties of tomatoes: cherry and beefsteak. The first few tomatoes we got were definitely picked too soon, and they didn’t taste great; the later tomatoes were big, beautiful, deep red, and delicious! I just wished for more variety, and I wished we had started receiving ripe tomatoes earlier in the season!

All in all, this was a very interesting, valuable experience. As a result of participating in a CSA, I was stretched to find new ways to prepare foods I normally don’t eat very much. I also had to really buckle down to try to use everything up, so I grew a lot in my ability to plan meals by looking in the fridge and thinking about what was already there! Hopefully that skill will continue to develop and become a real money and food saver for us!

If you are thinking about joining a CSA in the future, I have a few recommendations that might help.

As for us, we have decided to go the farmer’s market route next year. We value supporting local farms and eating fresh, seasonal food—but we realized it is important to us to select our foods ourselves. This will allow us to have some control over not only what we receive, but how much of each item, and what shape it’s in. Hopefully, we will be able to spend less money, eat delicious food, and still challenge ourselves by trying new things!

Okay, so that’s my spiel. I hope this is helpful or interesting for you if you are considering joining a CSA. And even though we are not currently planning to rejoin, I still very much enjoyed the experience and hope that you consider trying out a CSA membership for yourself!

6 comments to “CSA in Review”