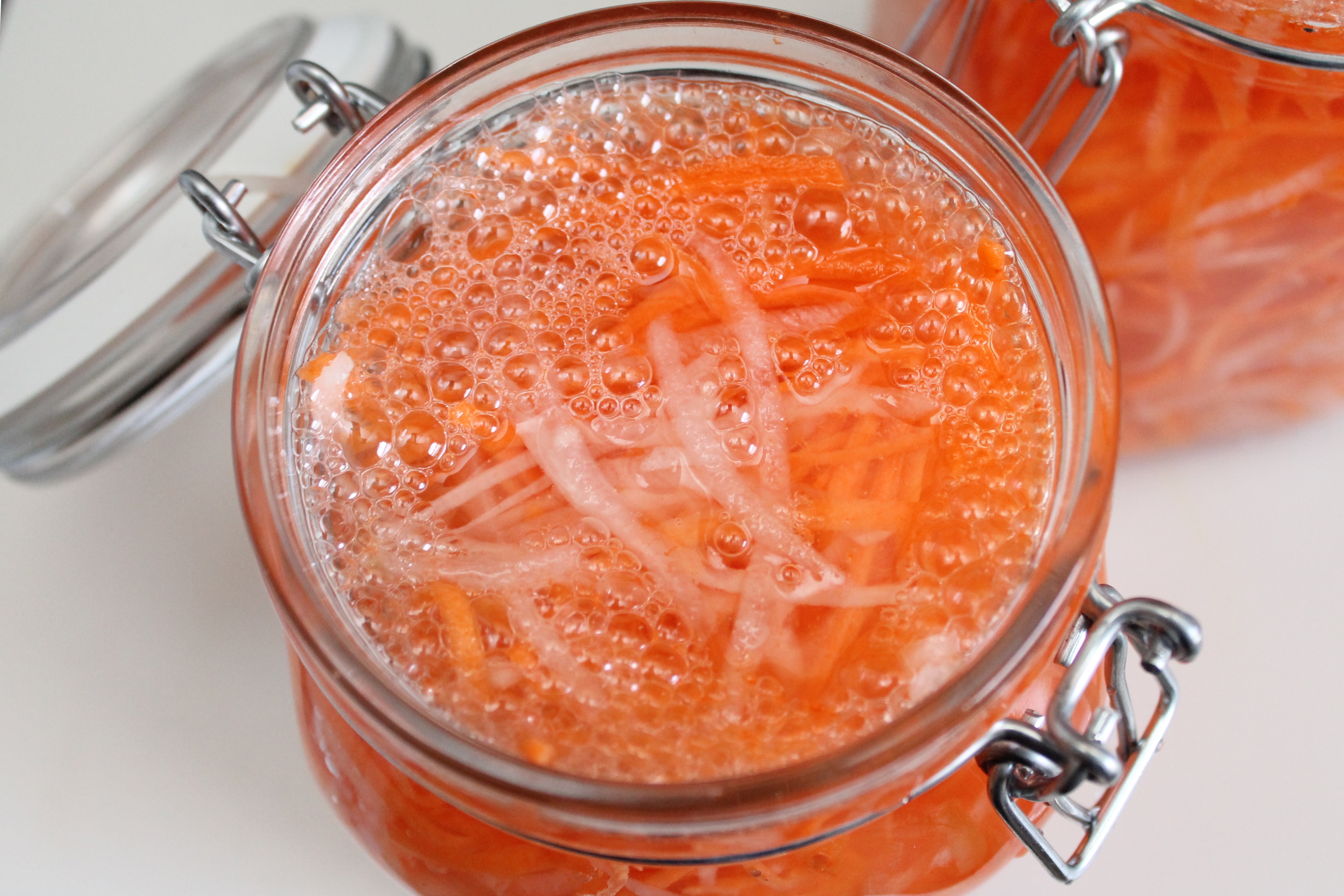 The first time I ever encountered non-cucumber pickles was a revelation to me. I have always hated cucumbers, and pickles were naturally distasteful to me, as well. But there I sat, across the table from the man I would one day marry, sweaty and gross after the first of many 3-mile runs, getting ready to eat pho.

Or rather, I should say, that he was getting ready to eat pho, and I had opted for something less warm, because I didn’t think I could handle a pot of heavy broth at that precise moment.

So there we are, me feeling super awkward because of the sweat now drying on my clothes, my calves already tightening from the run (in which, naturally, I had pushed myself too hard in order to impress this strange man), and him chatting merrily about pho broth.

And I found this weird little dish of condiments in the middle of the table. And there were pickled carrots and daikon radishes. And I had no idea what a daikon radish was. And…I totally thought they tasted weird.

Memory lane is a funny place. But I have to admit that I do love a good Vietnamese vermicelli bowl, despite the odd timing of my first taste. And the key ingredient to a good noodle bowl is a big hunk of do chua, or pickled carrots and radishes.

Of course, you can eat these on other things. I am told that the most common use is on bahn mi sandwiches. But I am sticking to noodle bowls. And maybe salads. 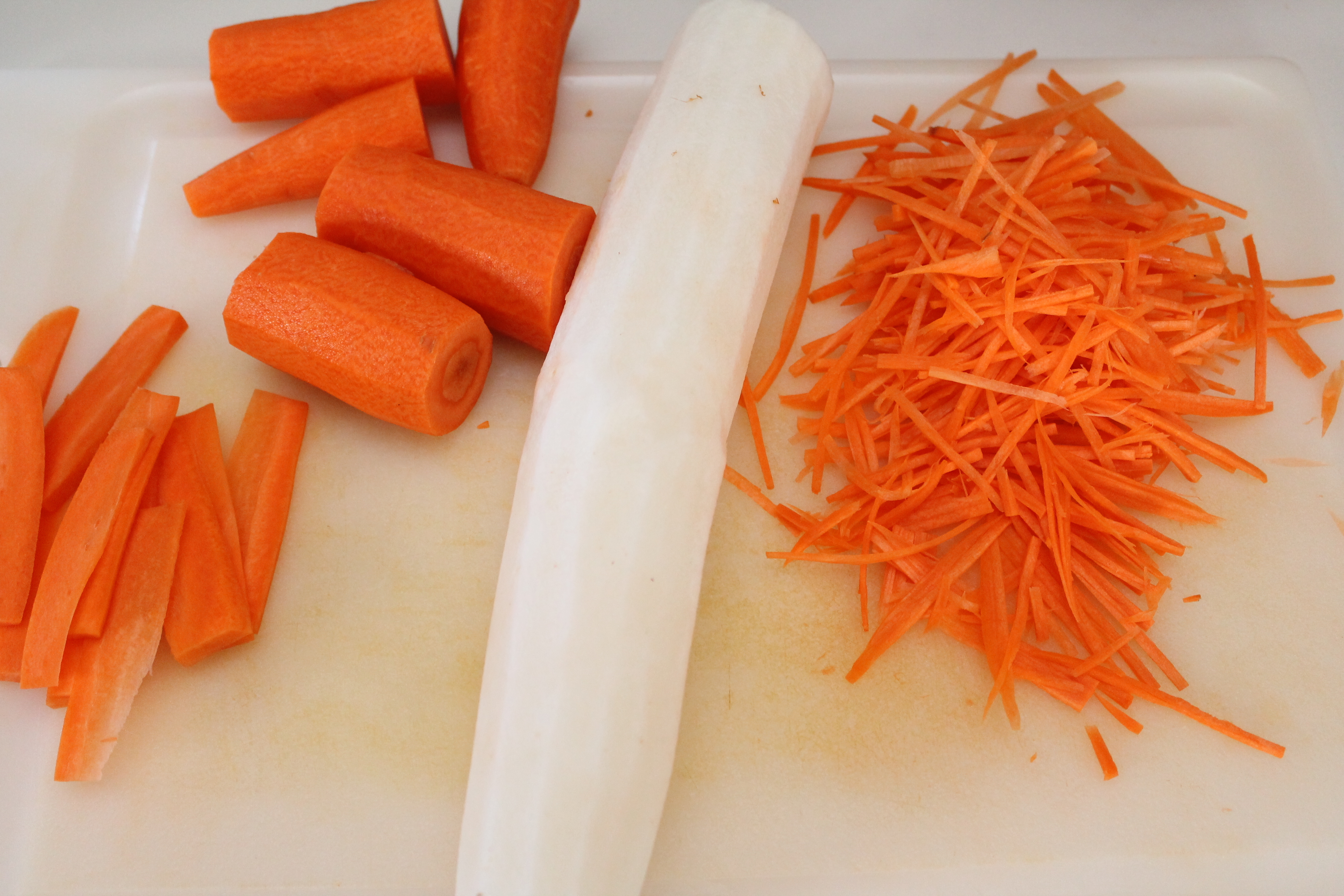 Pickled anything is pretty easy. The hardest part about these is cutting the carrots and radishes into matchsticks.

Don’t tell anyone, but I cheated and used my food processor. I mean, I chopped 1 carrot by hand, and it took me like 15 minutes. So then I gave up on that plan, to heck with artistry, and plugged in my Hamilton Beech. Let’s be practical here. Time is of the essence! 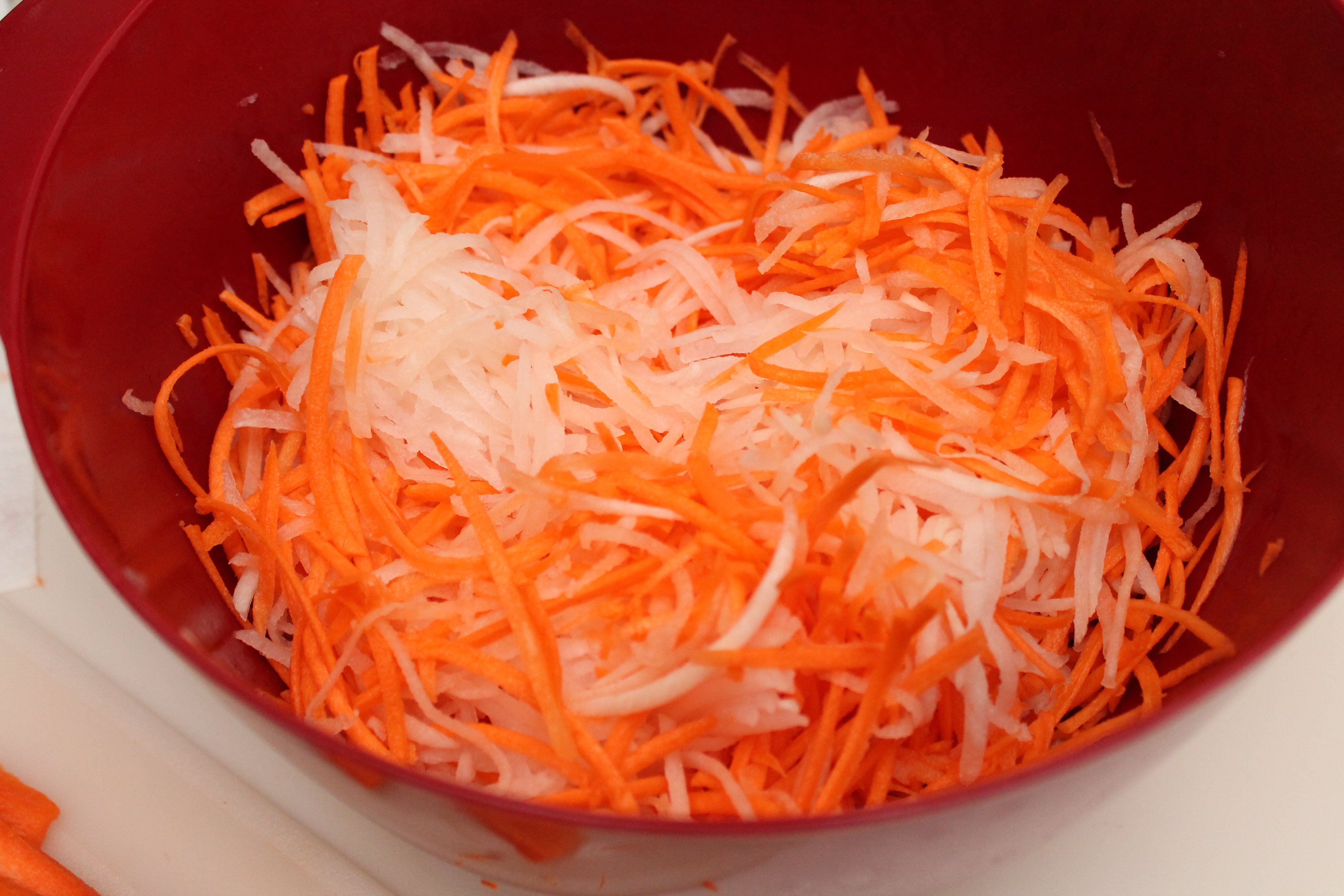 You could probably grate your veg, as well, just aim for long shreds. I cut my veg into chunks that could fit sideways into the food processor, and therefore would make shreds about 2½″ long as the blade whizzed around. Perfect.

Now, drop the shredded veg into a large container that has an airtight lid. 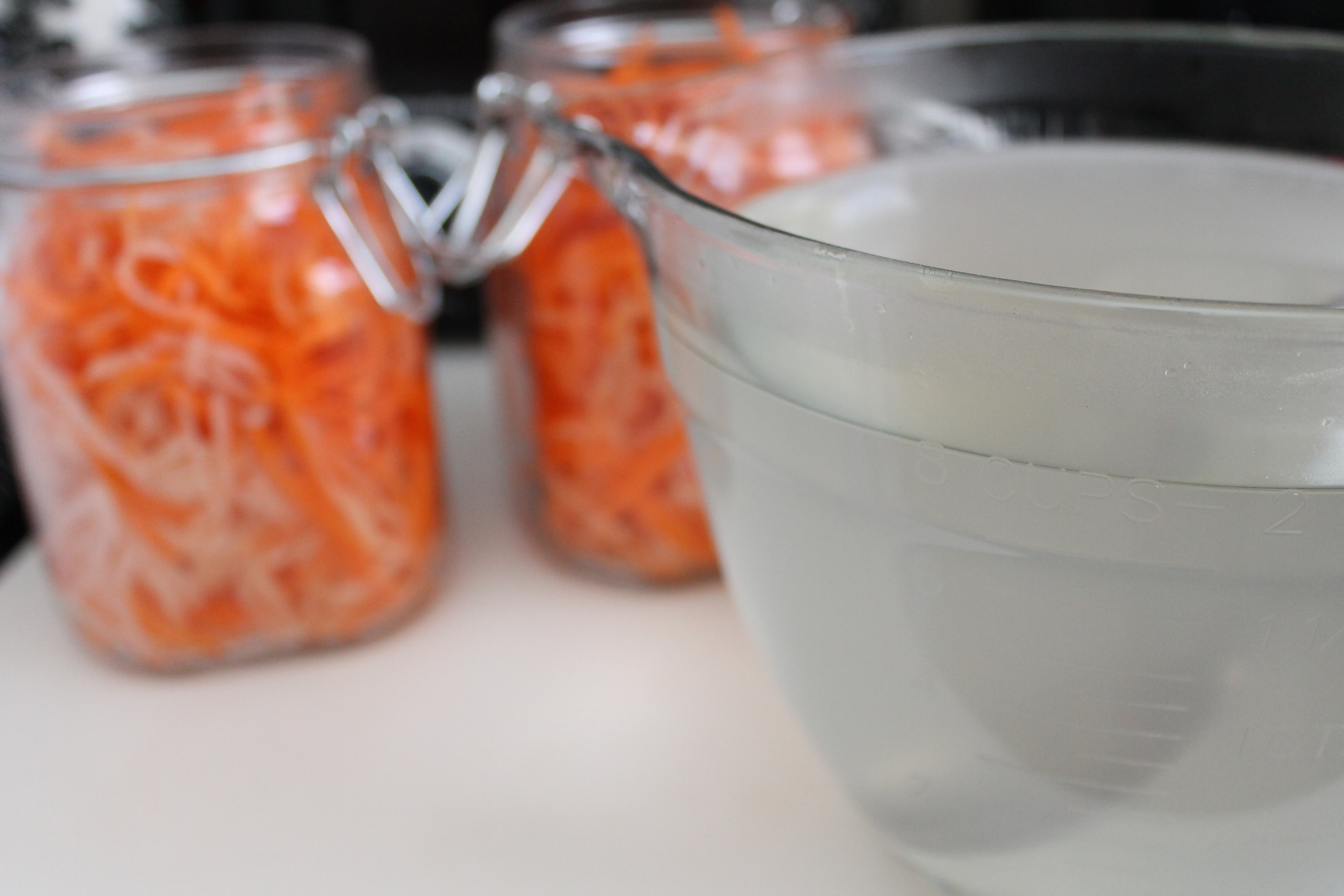 Make your pickling brine. This is as easy as stirring together hot water, salt, sugar, and vinegar. The recipe I originally used made about twice as much brine as I actually needed, for some reason. I left the original volume in the recipe below, but don’t be surprised if you have way more than you need. The original recipe was also a bit salty for my taste, so I have decreased the salt slightly below. Definitely taste the brine before you pour it over the veggies! 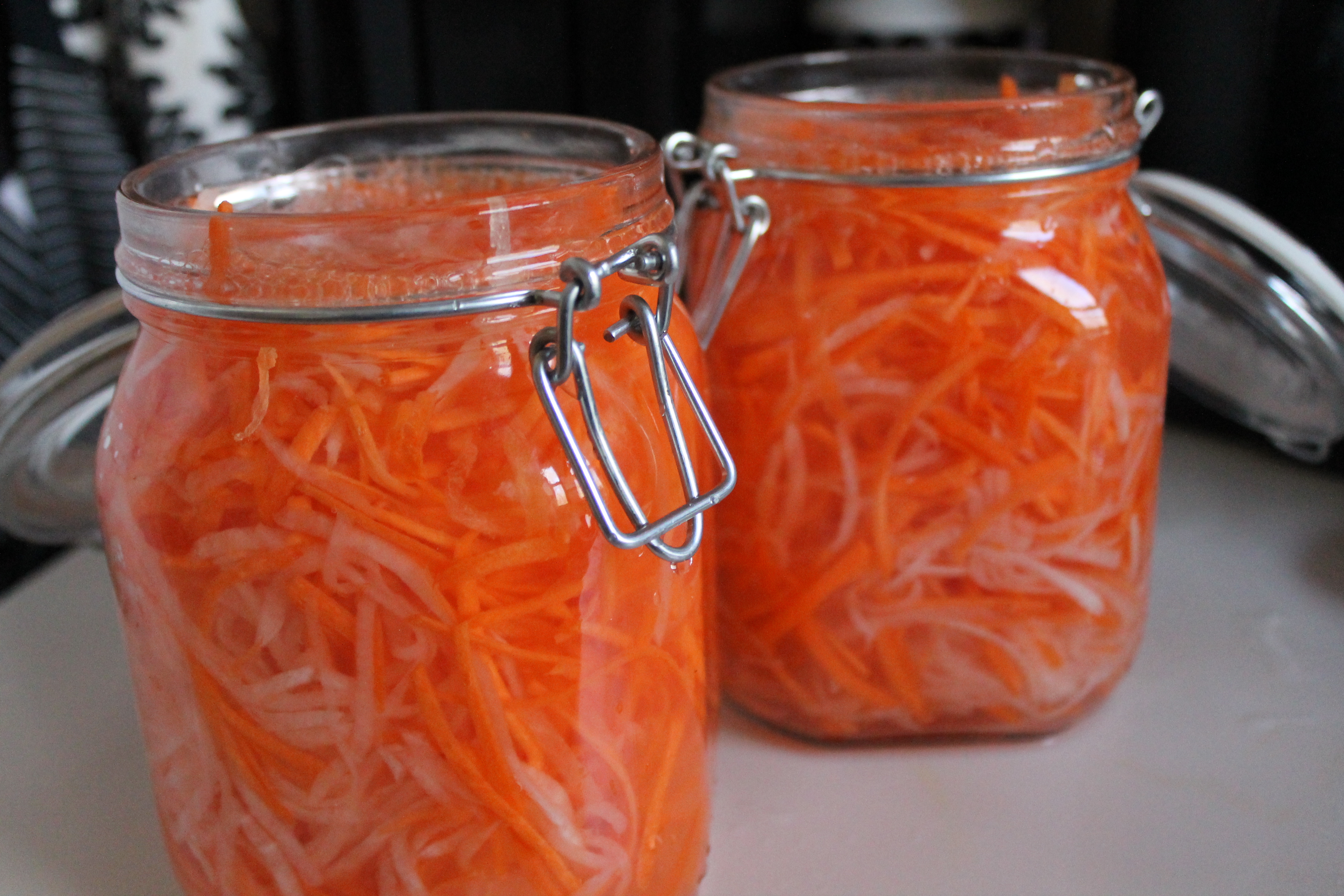 Pour the brine over the veg and seal the container.

And now you let the pickles marinate for at least 24 hours before serving, and preferably a few days!

Directions:
Mix the carrot and radish sticks together and transfer to a large glass container (or two medium containers) with an airtight lid.
Combine the water, sugar, salt, and vinegar. Taste and adjust sugar and salt as needed. Pour over the veggies.
Seal the container(s) and store in the refrigerator at least 1 day or up to 1 week before serving.
*Note: There may be more pickling brine than is actually needed to fill the containers and cover all the veg.