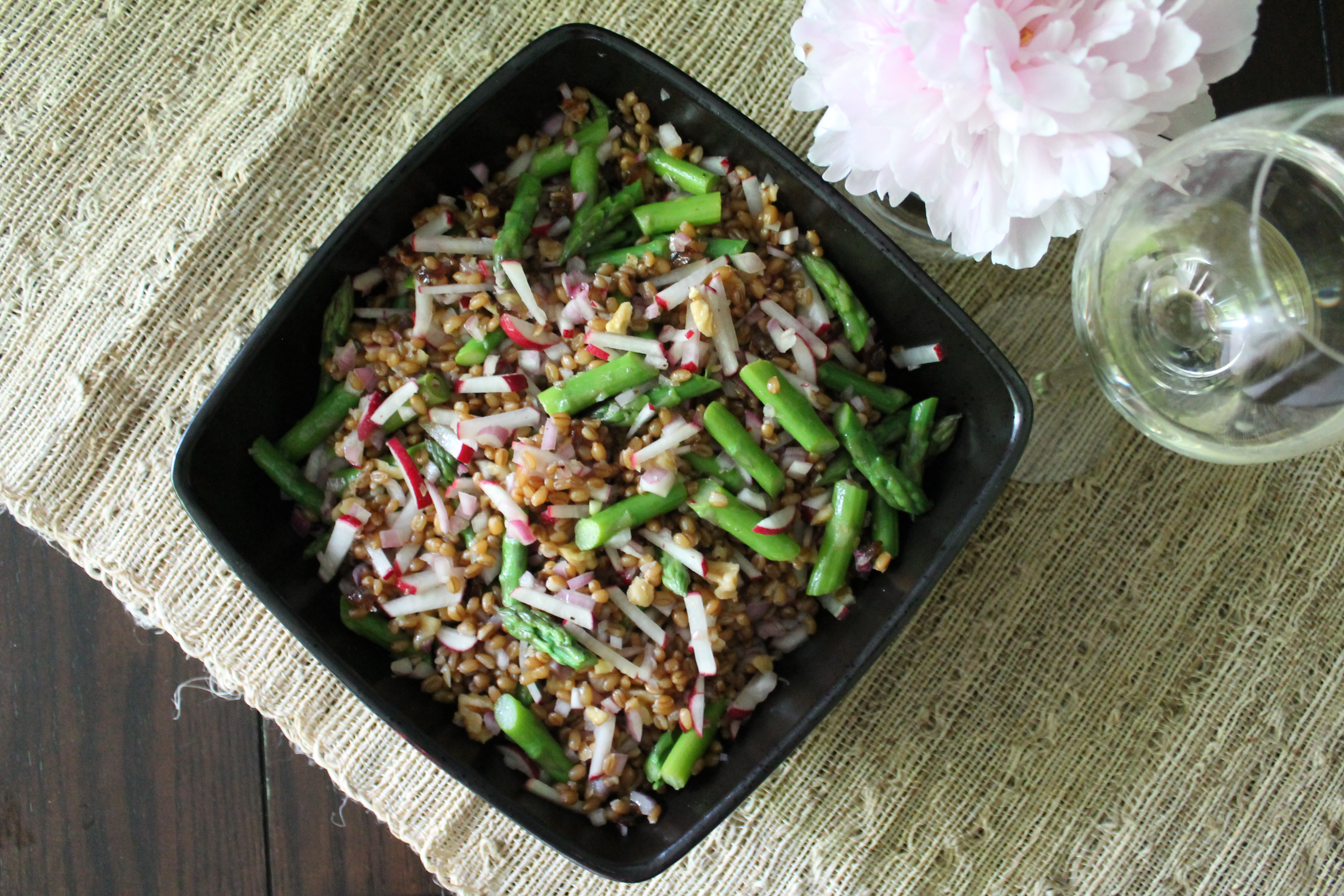 Warning: I am about to get a little dorky.

You know how professional chefs on cooking shows are always saying things like, “And then we add a little honey for a touch of sweetness” to perfectly savory dishes? Um, why would I care if my salad is sweet—it’s not dessert…

They are aiming for presence and balance of the five tastes: sweet, sour, salty, bitter, and umami (savory). (Okay, spicy isn’t one of the sensory tastes, but it’s pretty important to throw heat into the mix, too.) Balance is a key trait of delicious food, which trained chefs learn early on. Another key trait of excellent food is diversity of textures: creamy, soft, chewy, crisp/crunchy.

I know this. You probably know this. Well balanced food is hard not to love!

So there is really no explanation for the doubts I had when I first found this recipe. I was just so skeptical…but thank God I followed it to a T, because folks, this wheatberry salad is simply perfect. There is no other word for it. Don’t you turn your nose up at adding chopped dates or think about skipping the pickled shallots. The first mouthful will win you over, no question.

I love that Alexandra includes a basic formula for making great grain salads (and admit that I was probably taken aback because hers is so different from mine! Mine went something like: grain + something spicy/sharp + something creamy + something roasted + something fresh/green…and it yielded delicious results, but clearly I have got to start including sweet and sour in the mix!). 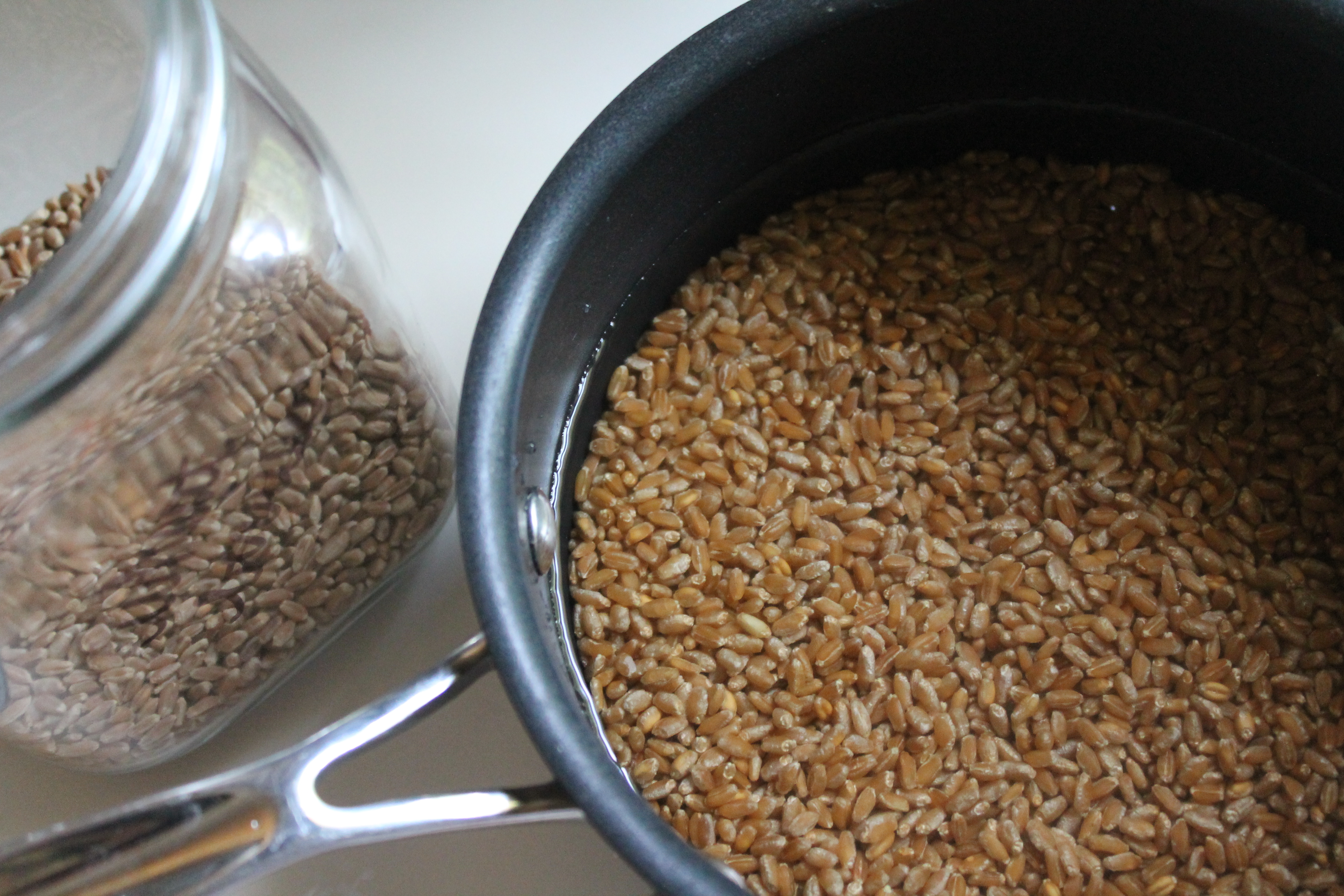 Of course, if you can’t tolerate wheat, a very simple swap would be pearl barley: pearl barley is also round and chewy, so it would achieve a similar textural effect in the salad, though you would lose the nuttiness.

Wheatberries take a very long time to cook if you buy them dry (which I do). But the good news is that you can basically just ignore them and they will take care of themselves! 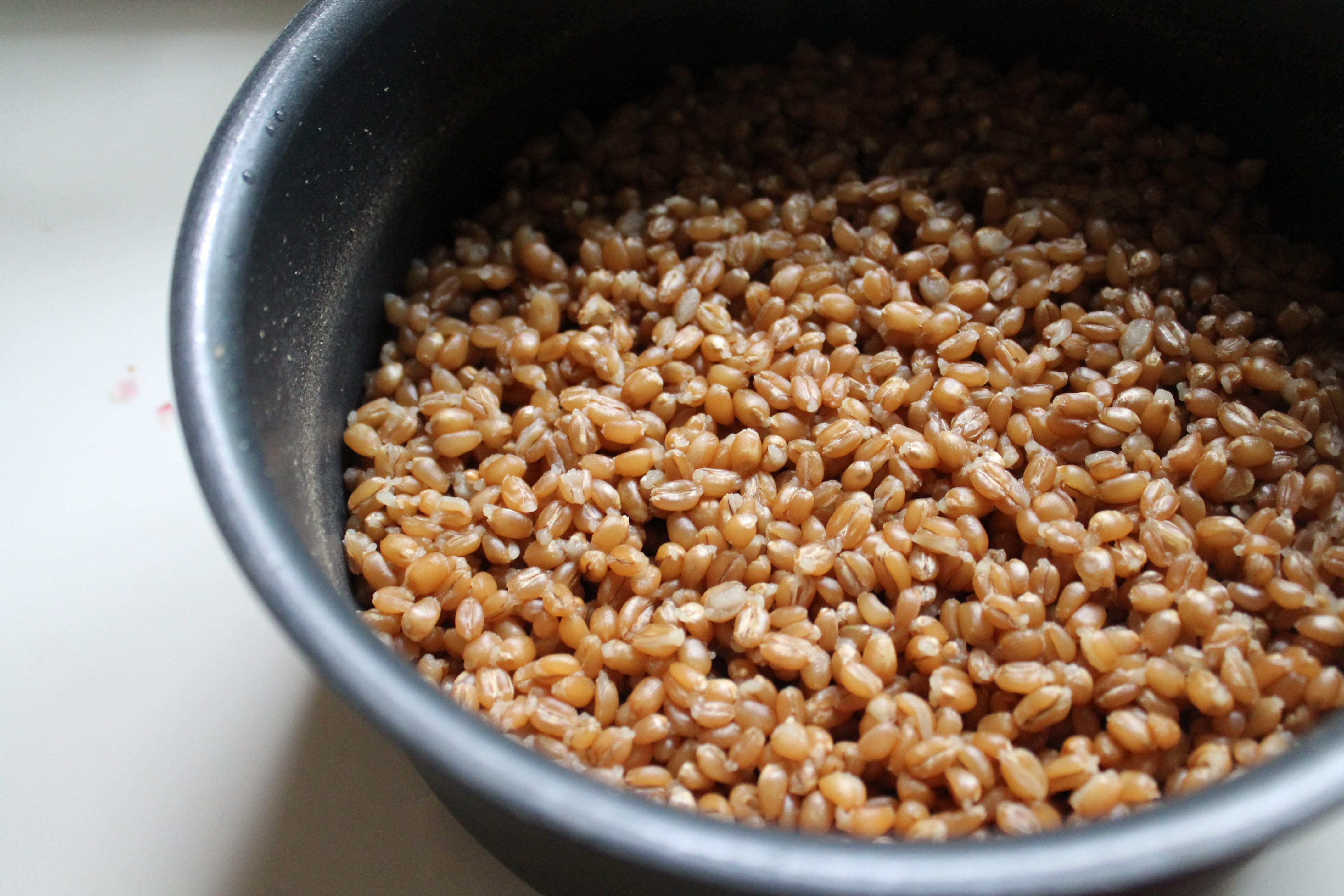 Rinse them out, and then drop them in a pot with double the water (that is, you should aim for a 1:2 grain:water ratio). Bring the water to a boil, then cover the pot, lower the heat to medium-low, and let the wheatberries simmer for 1 hour. At the end of the hour, the water should be completely absorbed and the wheatberries will be plump and chewy.

Meanwhile you can put everything else together in a very leisurely manner! Set the walnuts into the oven to toast. You could use a different nut if you are allergic (pecans? pine nuts?), or you could even substitute pepitas. The goal is to give the salad a nice, toasty crunch. 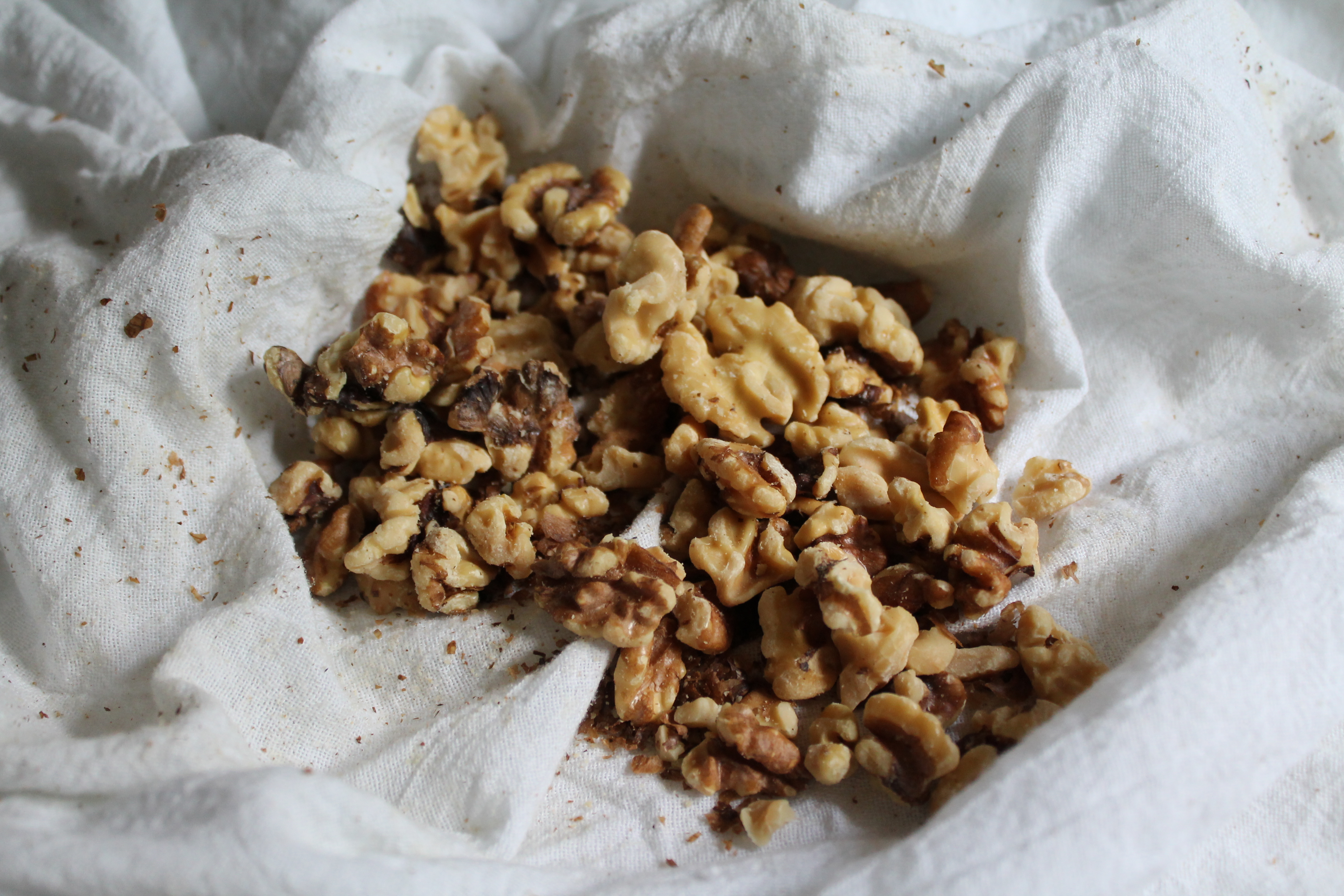 When the walnuts are done toasting, grab a tea towel and rub the warm nuts around in the towel to get the skins off. You can also shake them in a fine mesh sieve to loosen some of the skins and separate them from the nuts. Then break them or chop them into smaller pieces and set aside to finish cooling. 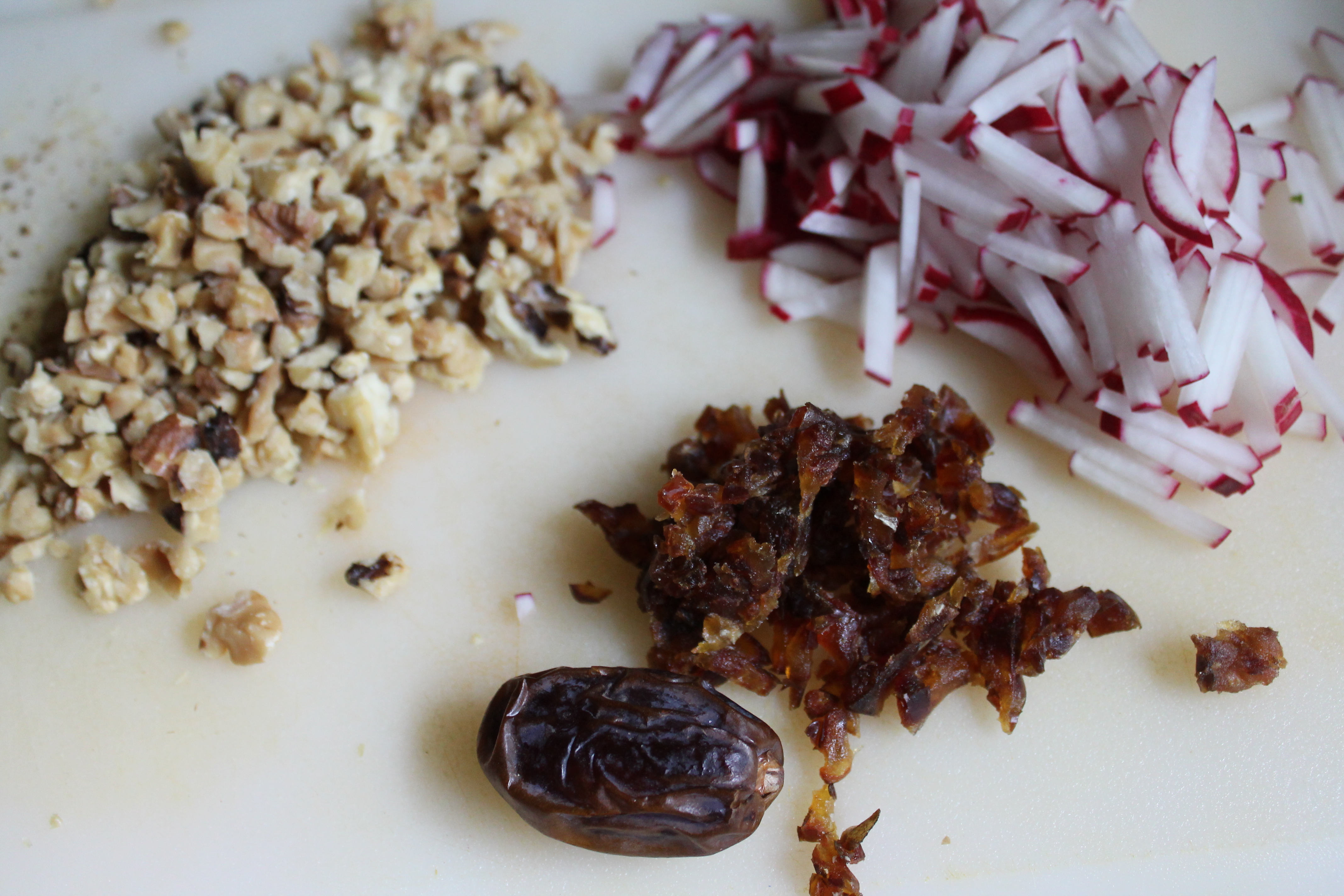 Cut your radishes into strips. A big bite of radish can be overpoweringly spicy or earthy, but little radish matchsticks are crisp and a little sharp without overwhelming. Yes, cutting a bunch of radishes into matchsticks is a little annoying, but it’s worth it!

Now we cut up dates. I was so skeptical about the dates…and I hated to waste them if this didn’t turn out well, since I am rather date-greedy these days! But I promise the little sweet bites of date round out the whole salad and make it amazing! I used just 2 dates, because of the aforementioned greediness, but you could use 3 if you do like a lot of sweet with your savory. Just cut them up as small as possible (no easy feat, given how sticky they are). 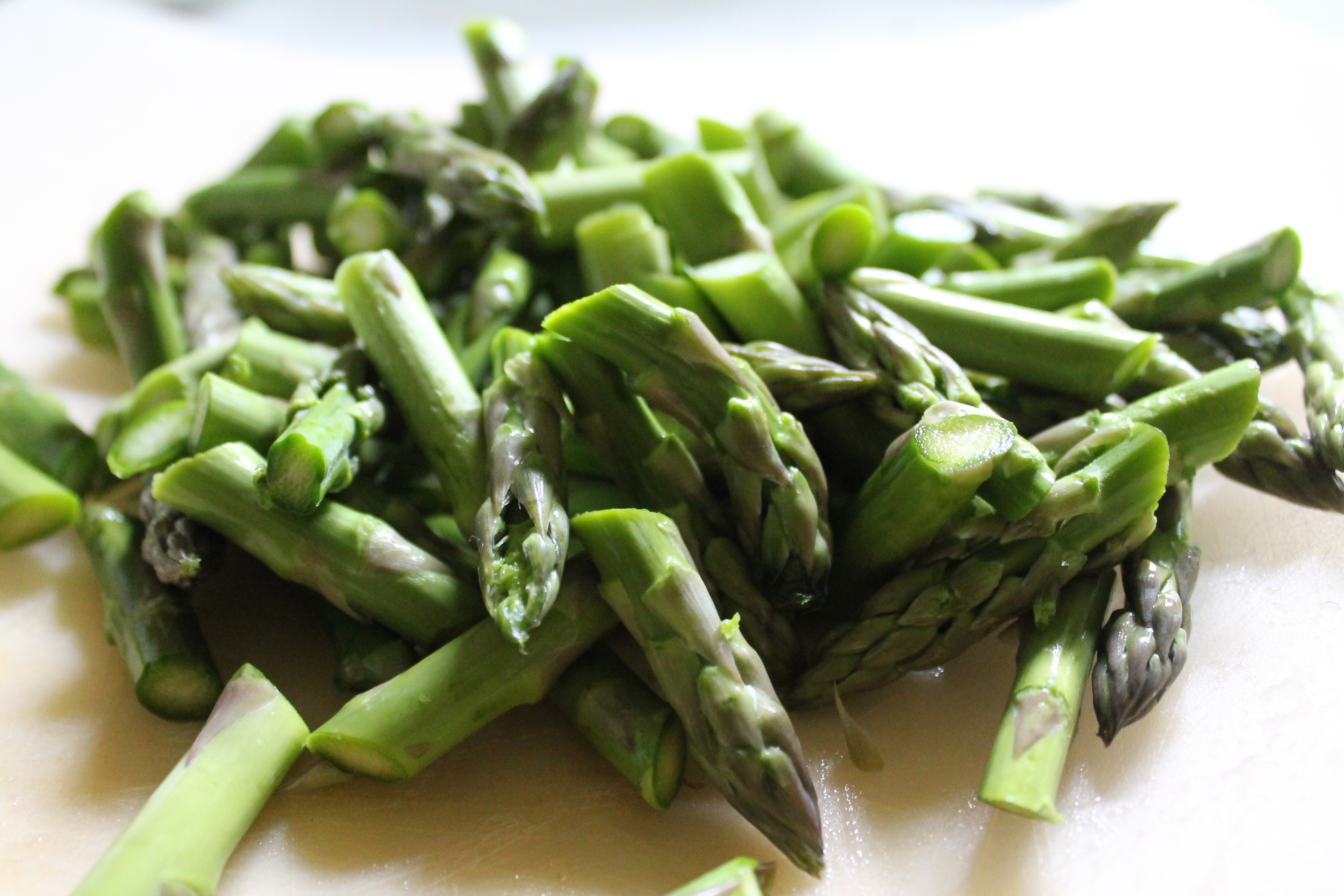 Now trim the asparagus and cut it into 1½″ segments. I cut mine on the bias, but that involved cutting each one individually, which is a little tedious. You can totally cut your bunch of asparagus in three well-placed strokes if that suits you!

Prep the bowl for the wheatberries with the seasonings. It’s best to stir in the salt, peppers, and olive oil while the wheatberries are hot so they can absorb a little of the flavor and spice.

When the wheatberries are cooked, dump them out into the bowl with the seasoned oil and toss quickly.

Immediately re-fill the pot with water and bring back to a boil as quick as you can. I was using a small pot and my burner was still hot, so it took just a minute or two. Now blanch that asparagus! It only needs about 60 seconds in boiling water to become tender, so don’t abandon it! Drain and rinse with cold water. 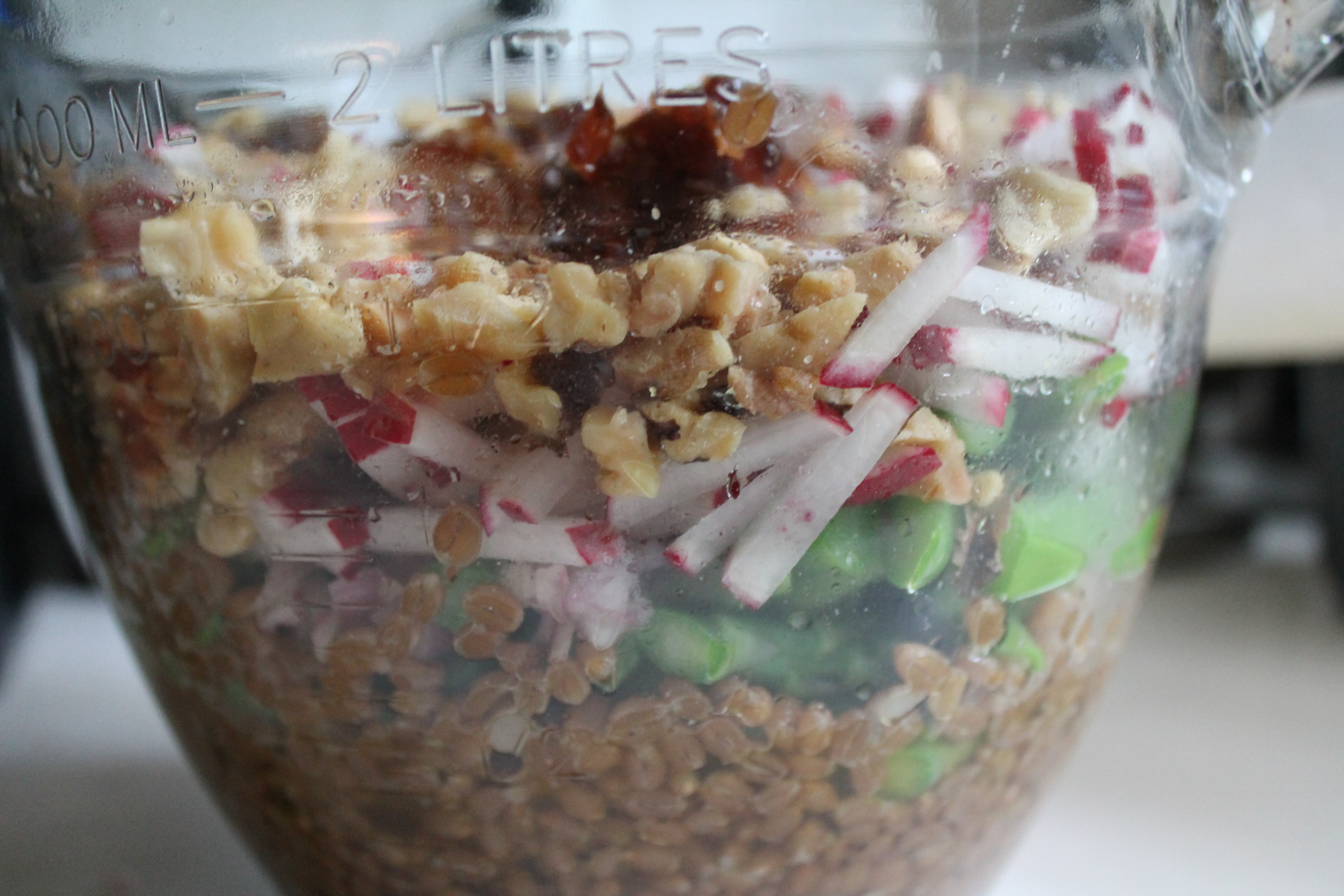 Toss the asparagus in with the wheatberries and add the remaining produce: radishes, shallots in their vinegar, dates, and walnuts. Toss until well mixed, then taste. I thought the salad was perfect at this point, but you should adjust as needed (more vinegar? more salt? more crushed red?). 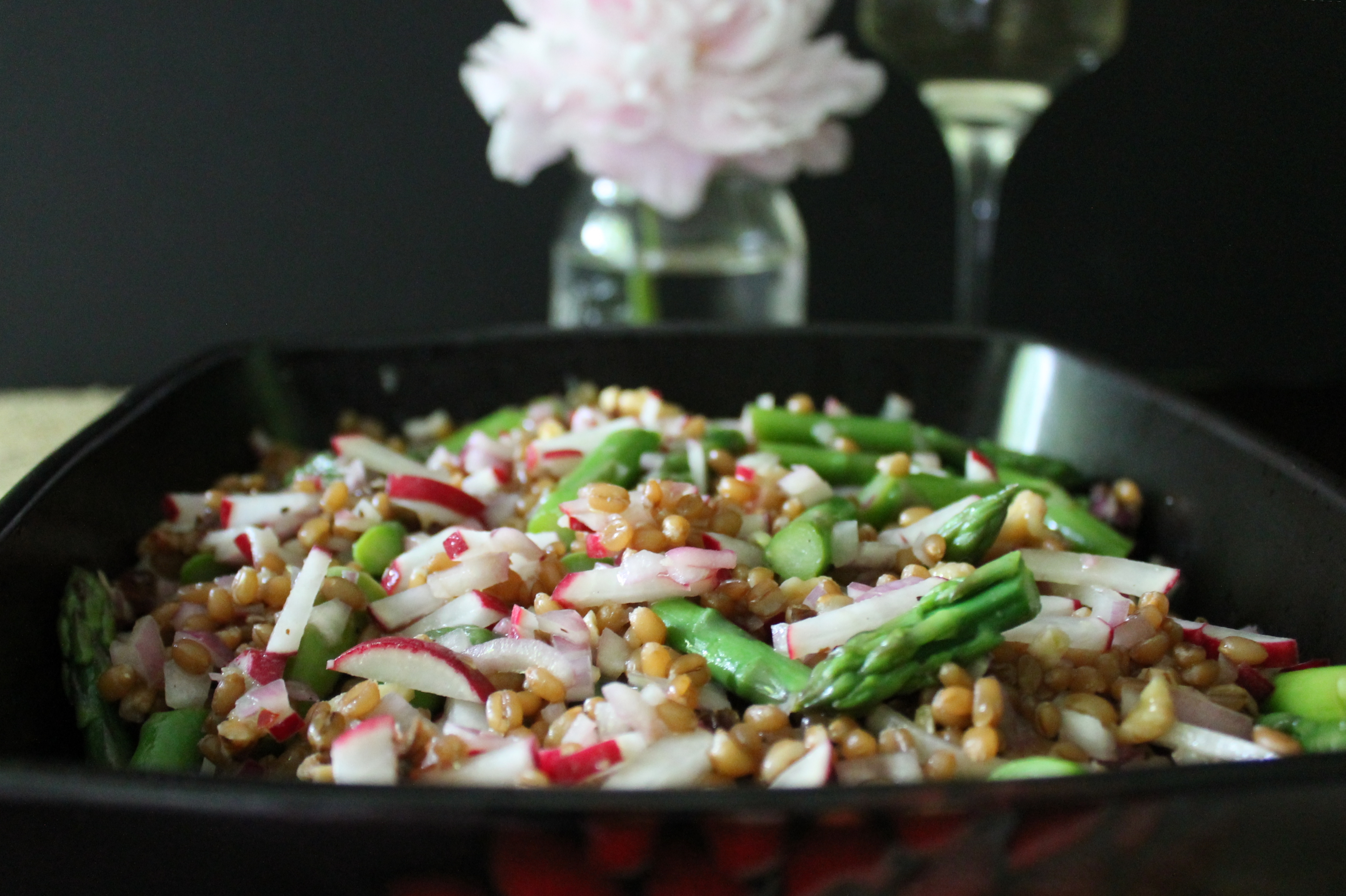 This wheatberry salad gets even better with age, and it makes a perfect lunch! Even my toddler ate some (gasp!—well, once…). Yum.

Also, this totally isn’t imperative, but a dollop of crème fraîche was amazing mixed into this. I also loved the salad on its own, so if you can’t have dairy or are vegan, you won’t feel like you are missing out…but if you have some crème fraîche (or sour cream) lying around, consider adding a small spoonful to your plate before you eat!

Directions:
Rinse and pick over the wheatberries to remove any stones. Combine the wheatberries and water in a small pot over medium-high heat and bring to a boil. Reduce heat to medium-low and cover the pot. Let the wheatberries simmer, covered, for 1 hour, until they are plump and chewy.
Meanwhile, finely chop the shallots and set them in a shallow dish. Cover with vinegar and set aside to pickle.
Prep the remaining ingredients. Heat the oven to 350° and toast the walnuts for 8–10 minutes, tossing once halfway.
Meanwhile, trim the asparagus and cut into 1½″ segments. Blanch the asparagus for 1 minute, then rinse with cold water to prevent them overcooking. Trim the ends off the radishes and then slice thinly. Stack several slices together and cut the radishes into thin matchsticks. Remove the pits from the dates and mince.
When the walnuts are toasted, remove the skins by rubbing each nut with a towel. Roughly chop the nuts and set aside.
When the wheatberries are completely cooked, drain any remaining liquid, then toss hot with olive oil, salt, and peppers. Add the shallots and their vinegar, asparagus, radishes, nuts, and dates and toss again. Taste and adjust seasonings as needed.