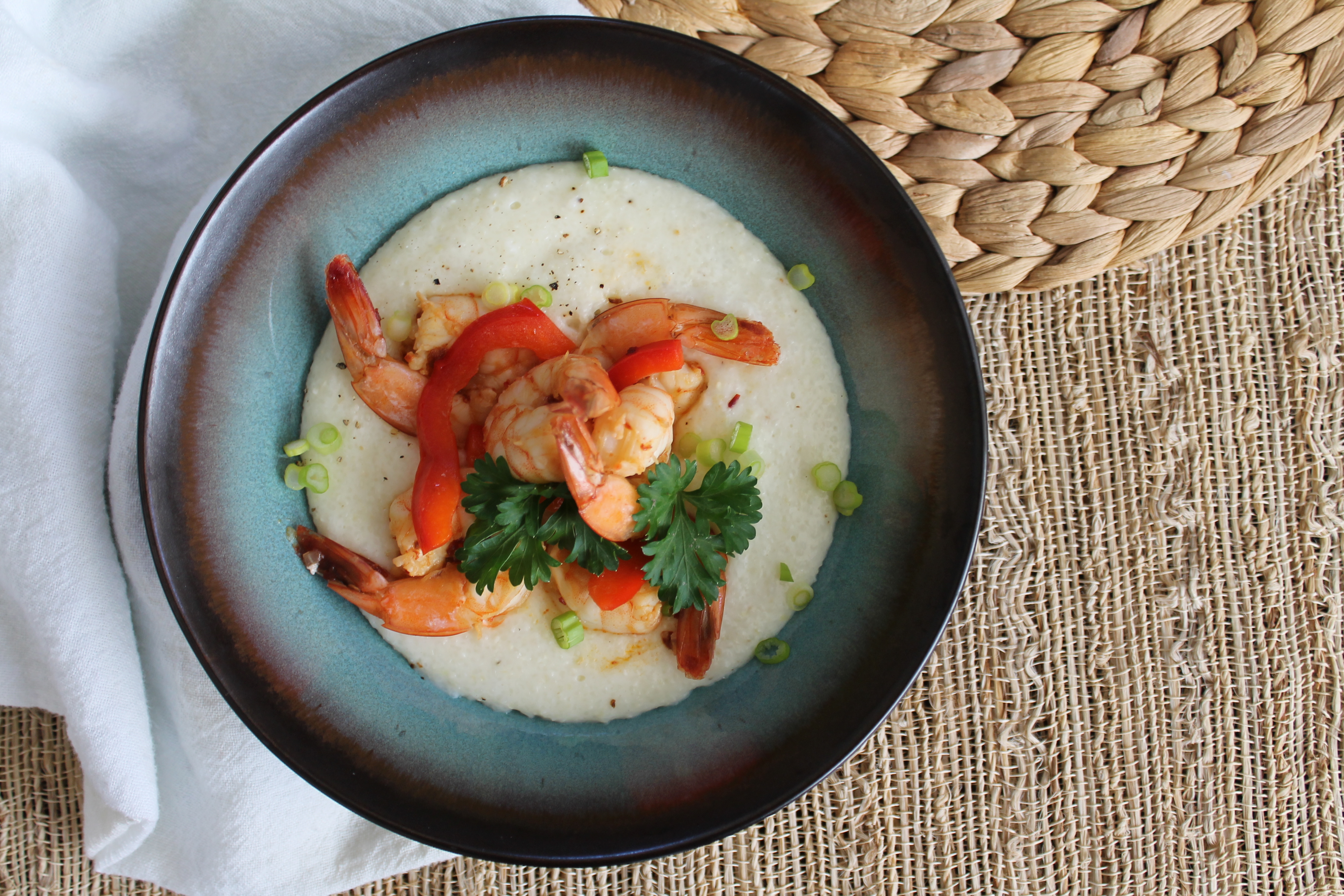 I was well into my 20s before I ever heard of shrimp and grits. In fact, I was a senior in college before I ever even tasted grits (why eat something gritty on purpose when creamy is so much better?).

Clearly I had been missing out in a huge way.

Shrimp and grits is a Southern classic! Enjoy it for breakfast, or (if you aren’t quite sure about shrimp first thing in the morning) enjoy it for lunch! Either way, you should make this quick and easy dish immediately. It is so full of flavor—thanks to an amazing marinade—that it will just knock your socks off.

I was immediately drawn to this dish while I was perusing my SRC blog for the month, White Lights on Wednesday. Initially, I thought that Julie and I were as different as night and day, but apparently, (aside from very different palates) we are super similar! We both could whip up a batch of chocolate chip cookies at a moment’s notice, we both are sightly obsessed with organizing things, and yet we both love to procrastinate doing the dishes after we photograph all these beautiful foods we cook. 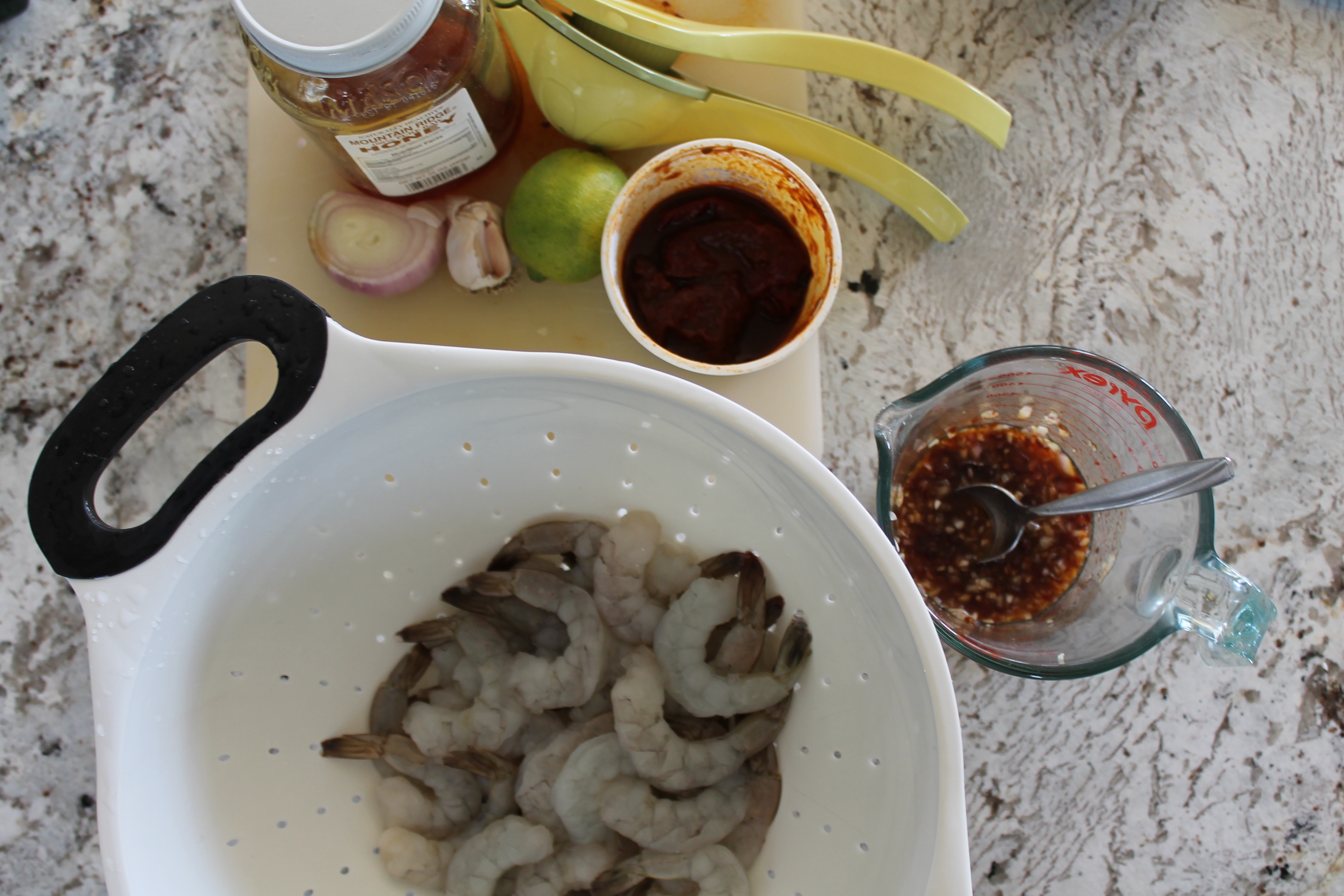 Julie originally made her recipe using a fancy dry rub. I didn’t have the same seasoning packet, and I prefer to make things from scratch anyway, so I improvised my own honey chipotle marinade! It was really easy, and I had all the ingredients on hand already, which was a huge bonus.

Chop up a chipotle pepper as fine as you can. Do the same with a small shallot (I chopped half a medium shallot, which made about 2 tbsp. minced shallot) and a large clove of garlic (okay, okay, I used a garlic press). Mix the chipotle, a dab of the adobo sauce, shallot, and garlic with a large spoonful of honey, a squirt of lime, and two big pinches of sea salt. Whisk it until it comes together evenly. 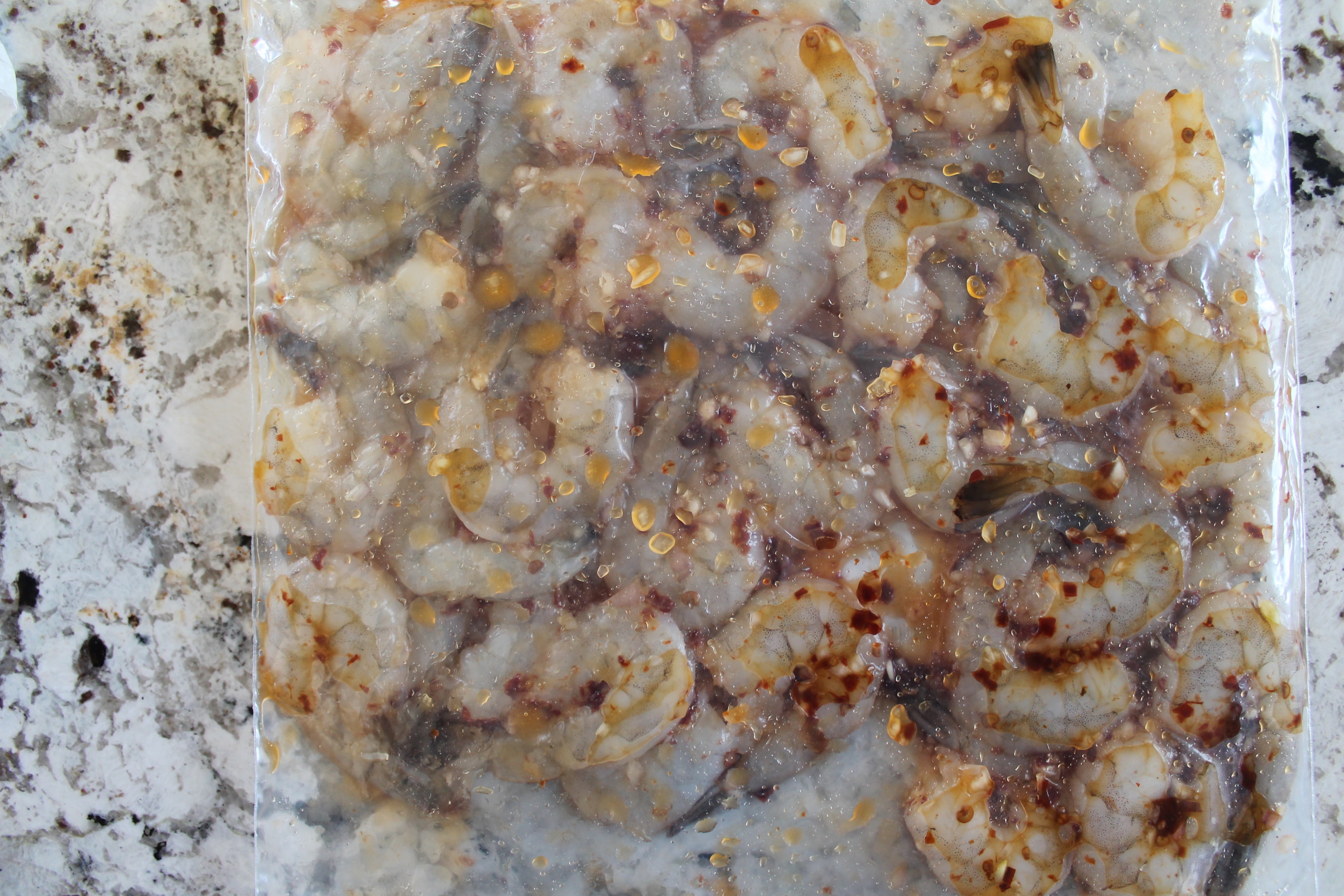 Combine the marinade with raw, peeled and deveined shrimp in a large Ziploc bag. I used very large shrimp, 26-30 count per pound. Shake the shrimp around until they are covered in the marinade.

Set the bag in the fridge until you are ready to cook them. I marinated my shrimp a little over an hour, but you could let them chill all day if you like! 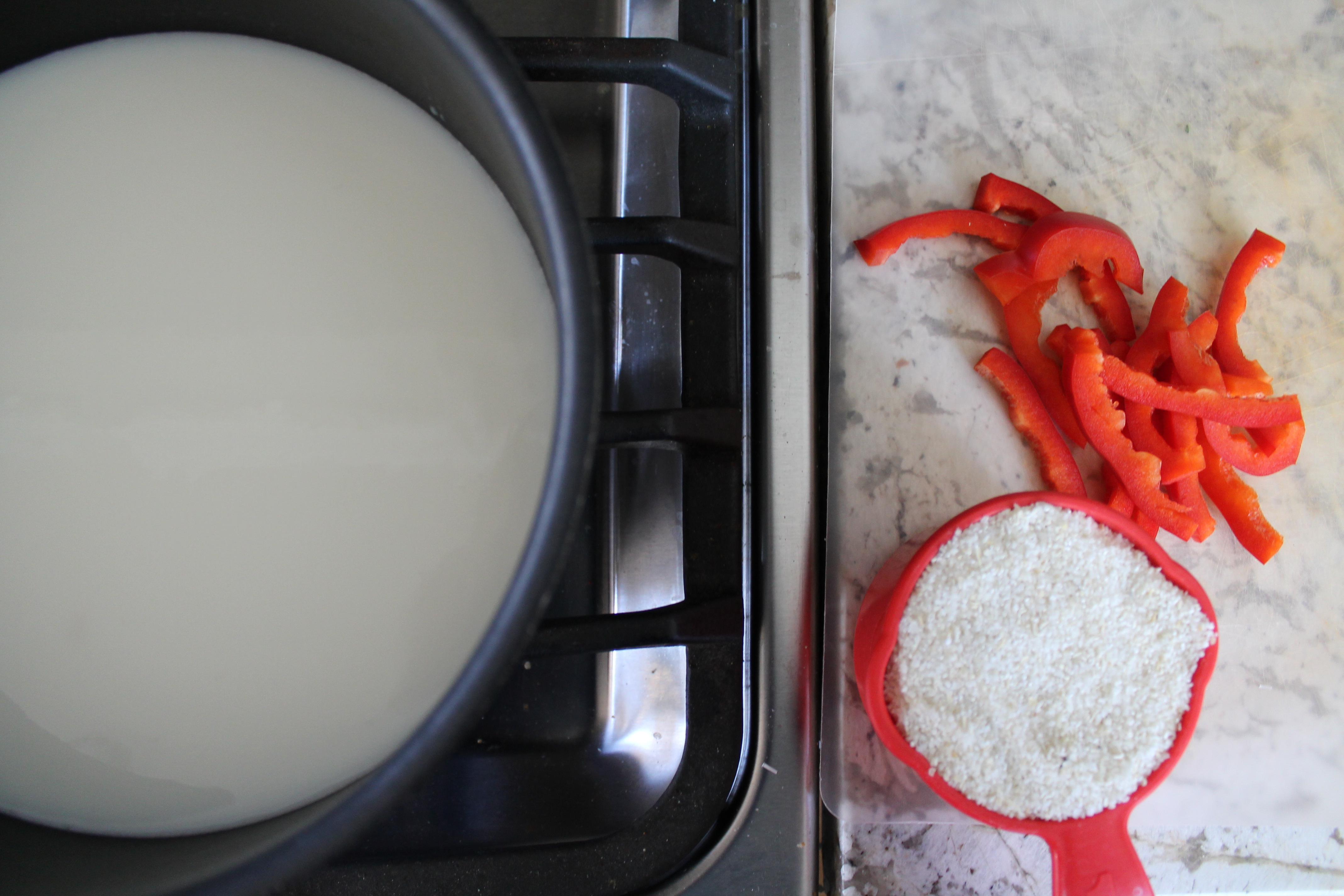 Now for our grits. (Julie actually made polenta instead, another type of cooked ground corn dish.) Don’t judge me too harshly, but I used instant grits. Stone ground grits would be better, but they are very perishable and I didn’t have them on hand. Honestly, having not grown up eating grits, I am not a snob. As long as they are cheesy, I am happy!

Instant grits really do cook quickly, but if you use stone ground grits, you will need an extra 20 minutes or so to get them tender and creamy. Bring milk and water to a boil, then add the grits. 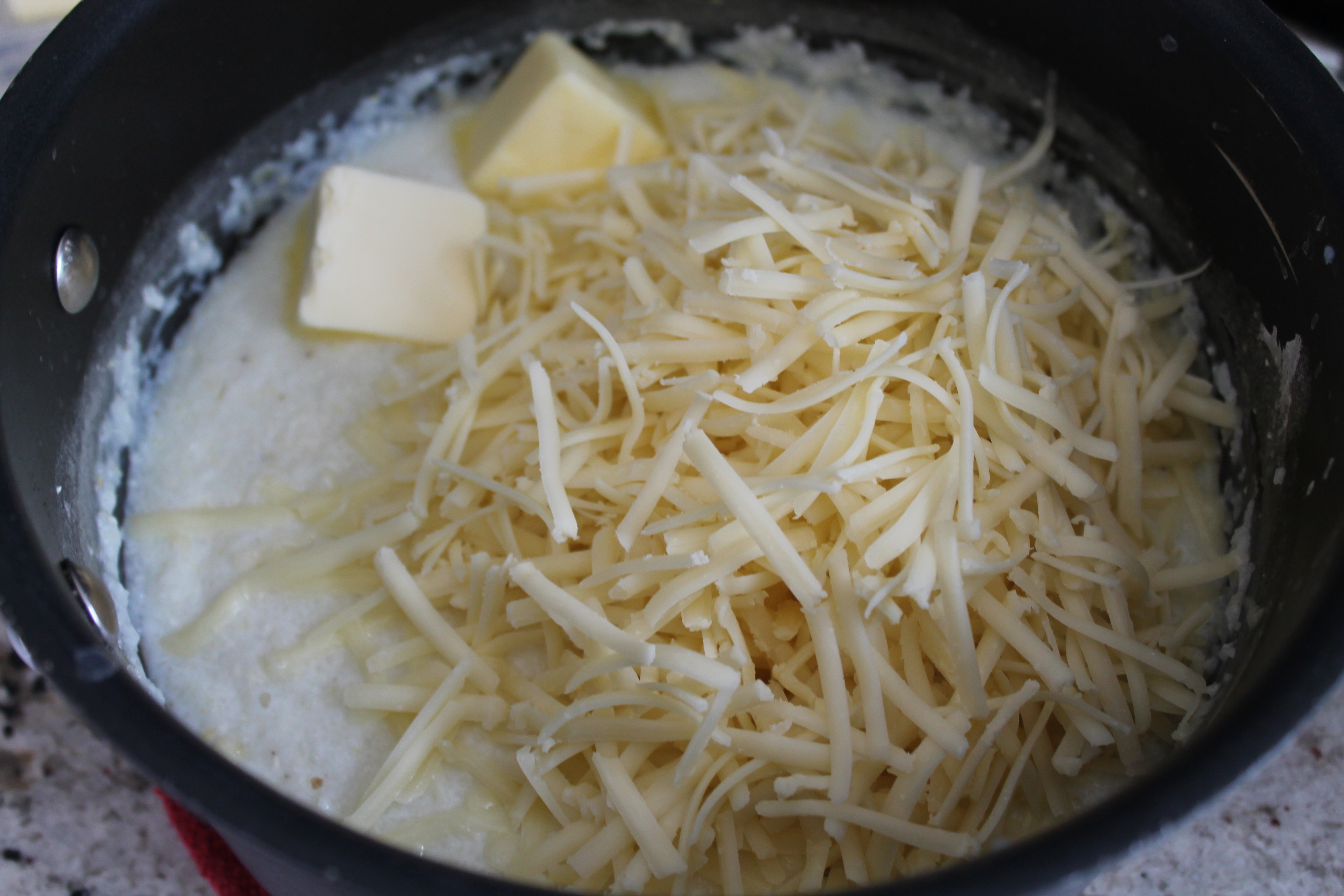 Whisk occasionally to prevent huge clumps, and remove the grits from the heat as soon as they thicken. Stir in butter, seasonings, and grated cheddar. Yum.

If you used instant grits, you will want to start the shrimp cooking as soon as you add the grits to the boiling liquid, because both will be done very quickly! (If you used stone ground, wait until 5 minutes before the grits are supposed to be done, because that’s all the shrimp should need.) 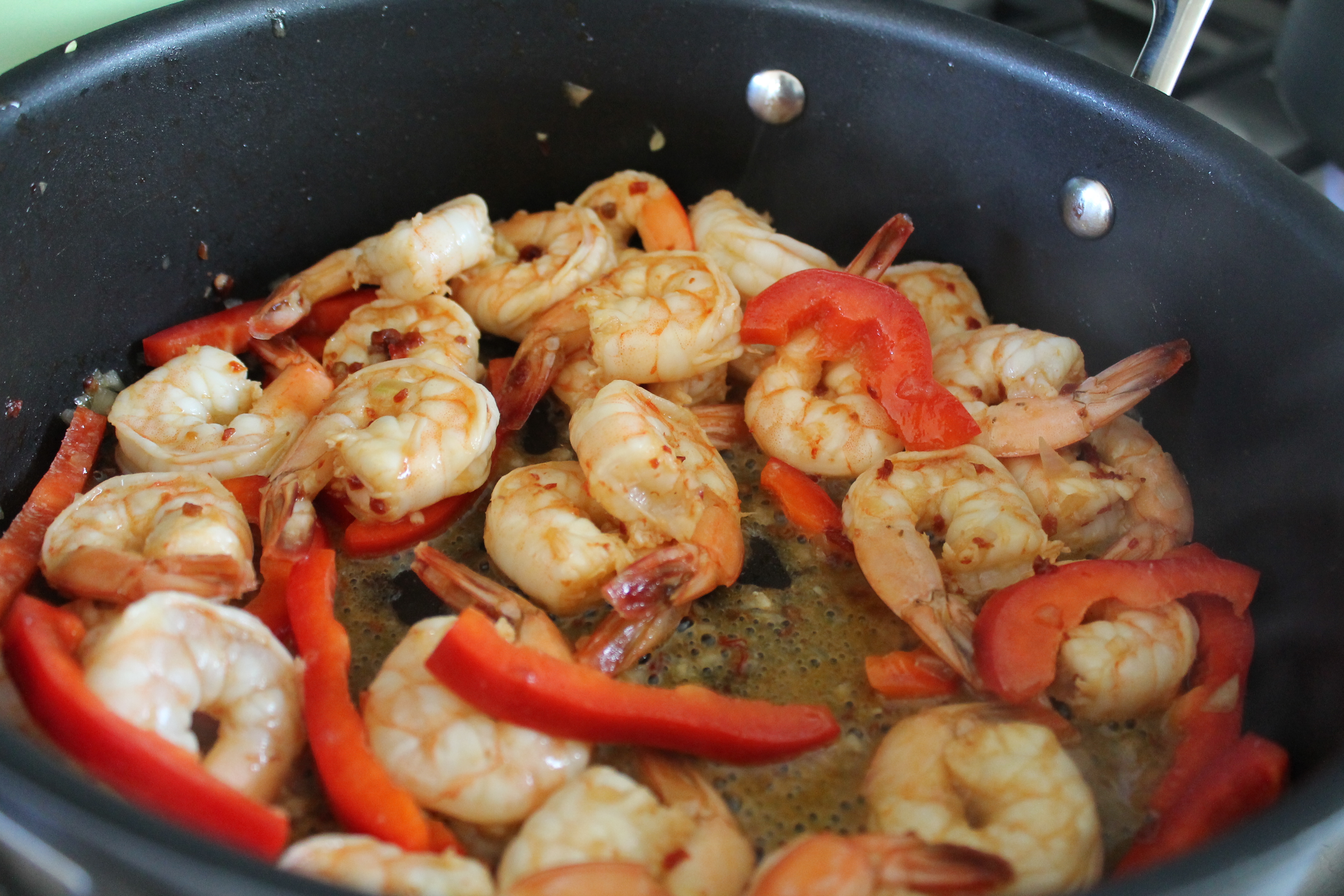 Heat a little olive oil over medium heat in a large skillet. Scoop the shrimp out of the liquid in the marinating bag—we don’t want to boil them!—and drop them into the hot pan in a single layer. Turn the shrimp after 2 minutes.

For good measure, I threw in half a red bell pepper. The red pepper added a few nutrients as well as a satisfying crispness against the creamy grits and tender shrimp.

Cook the shrimp and bell pepper another 2 minutes, until the shrimp are pink. Immediately remove them from the heat. It is so easy to overcook shrimp! Don’t let them get tough and chewy. 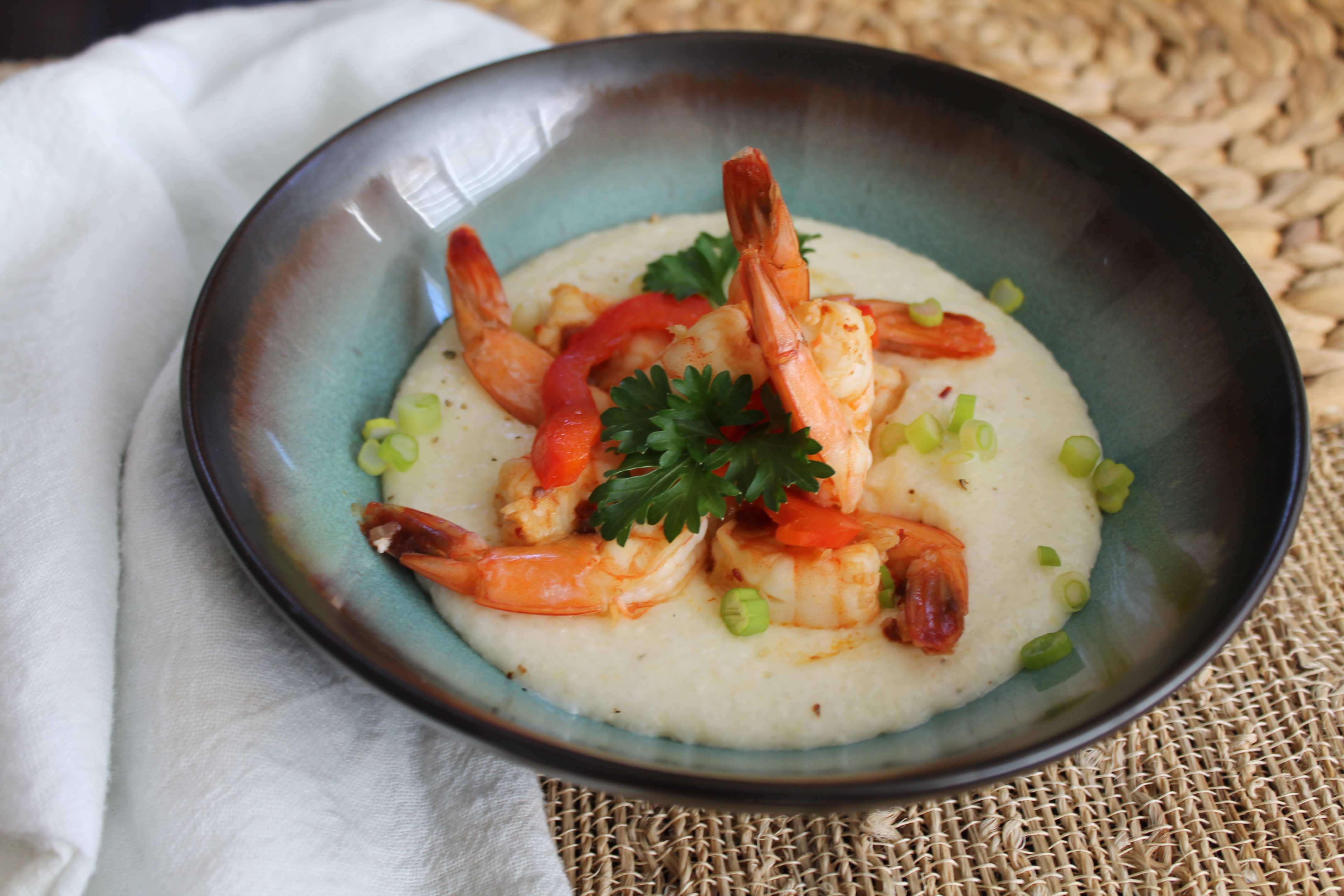 Directions:
Combine chipotle, adobo, shallot, garlic, lime juice, honey, and sea salt in a small bowl. Pour over shrimp and toss to coat the shrimp in the marinade.
Marinate the shrimp at least 1 hour and up to 12 hours in the refrigerator.
Bring the milk and water to a boil, then add the grits. Cook over medium heat, stirring regularly, until the liquid is completely absorbed and the grits are creamy, about 20–25 minutes. Remove from the heat and stir in butter, cheddar, and seasonings.
Meanwhile, heat the olive oil in a large skillet. Remove the shrimp from the marinade, leaving the liquid behind. Cook the shrimp for 2 minutes on the first side, then flip and add the red pepper. Cook another 2–3 minutes, or until the shrimp are completely opaque. Immediately remove from the heat.
Serve the shrimp over the cheesy grits, garnished with scallions and fresh parsley.