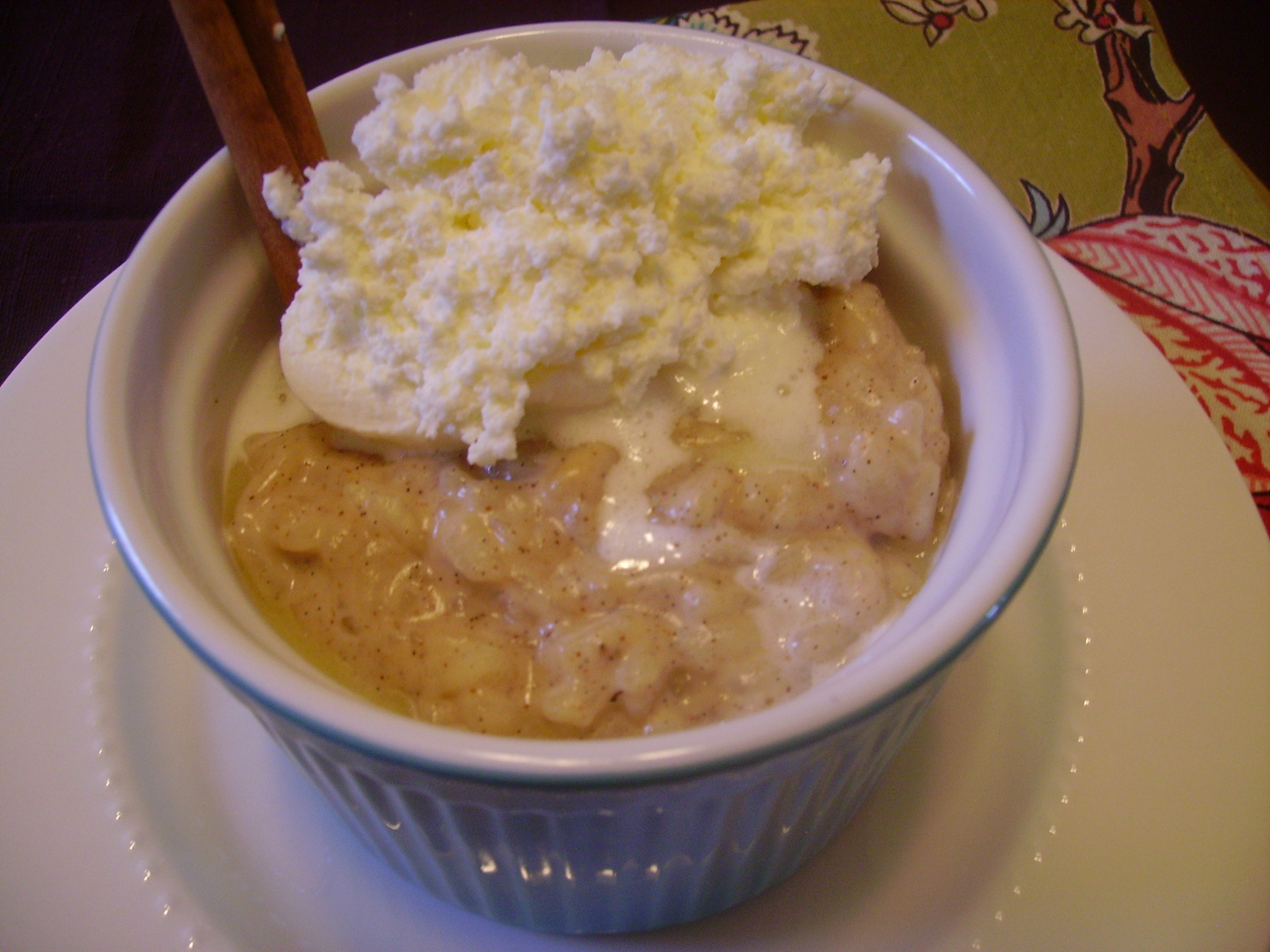 I joined a club. The Secret Recipe Club!

Basically how this works (er…a fanciful version of how this works, anyway) is that every month, every blogger in the club draws a different blog out of a hat and then makes a recipe from that blog. It’s like finding a new friend to share your recipes with, and a resource for good food you may not have stumbled across on your own.

So this month, I am making a rice pudding using risotto rice from my new blog friend Erin over at Easy Everyday Eats.

I had very few associations with rice pudding before making this recipe. When I was growing up, just the name sounded a little gross to me…I mean what kind of a nut would put rice in pudding, anyway? And doesn’t most rice pudding include raisins? Blech. But now that my list of favorite foods includes Thai sticky rice, I figured I’d better take a closer look at rice pudding, too.

I love that this recipe uses arborio rice, which is normally used to make risotto. When I read that, my brain immediately conjured up an idea about how creamy and soft this pudding would be. And let me assure you, in case you are used to rice pudding made with regular white rice, arborio rice is perfect for a rich and creamy dessert!

So I tried this recipe several times, and ultimately made a few adaptations in order to get it just the way I like it. First, I decided to use all milk in the cooking process (instead of a combination of water, milk, and heavy cream) because I wanted the rice to taste richer and the ingredient list to be simpler. Then, after making this recipe the first time, I realized that: a) I had read the directions incorrectly with regard to exactly when the rice pudding should go in the oven (probably because of my expectation that I should stir-stir-stir the arborio rice, as is necessary when making savory risotto); and b) I do prefer to cook this rice pudding completely on the stovetop, where I can indeed stir it regularly and prevent it from developing that awesome brown crust on the bottom where the dairy began to burn in the oven (though my husband said he especially liked those crusty bits…weirdo). Finally, I think sweetened condensed milk belongs in fudge, magic cookie bars, and cajete rather than on its own as a garnish, so I opted to use whipped cream as my creamy topping instead. 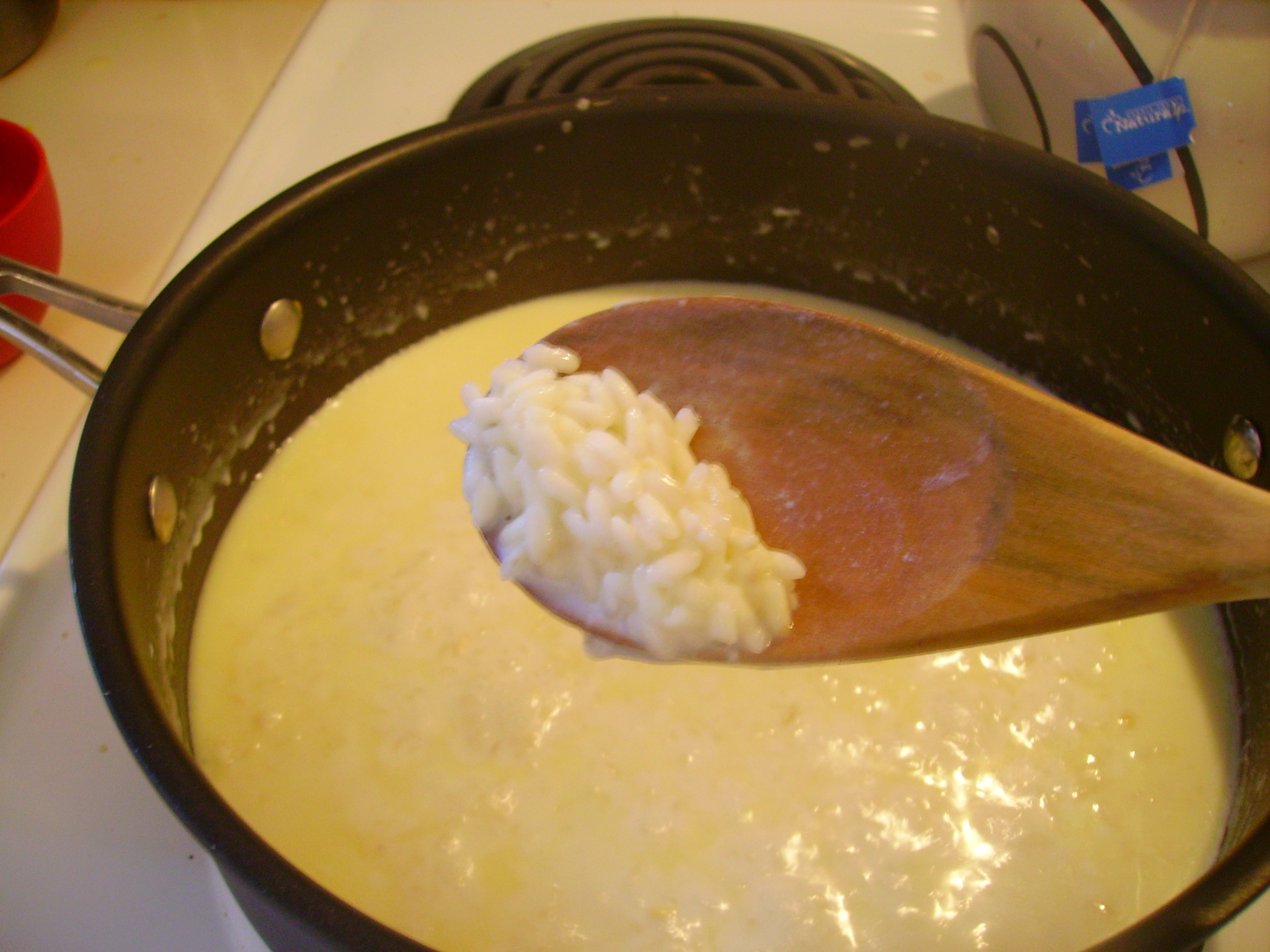 Start by scalding your milk in a large skillet. (Actually, you don’t have to do this if you don’t want to. I scalded my milk because I wanted to flavor the reserved milk with the harvested vanilla bean stalk, and I thought this would have a greater effect if the milk were warm.) Transfer half of the milk to another bowl.

Pour the arborio rice into the hot milk still in the skillet. Set the heat to low—remember that the faster the rice absorbs the liquid, the more of a bite it will have, and if it absorbs the liquid too quickly, it will still be completely crunchy in the center. Stir for about 2 minutes, then cover the pan and let the rice cook for another 10 minutes, until the milk has been almost completely absorbed. 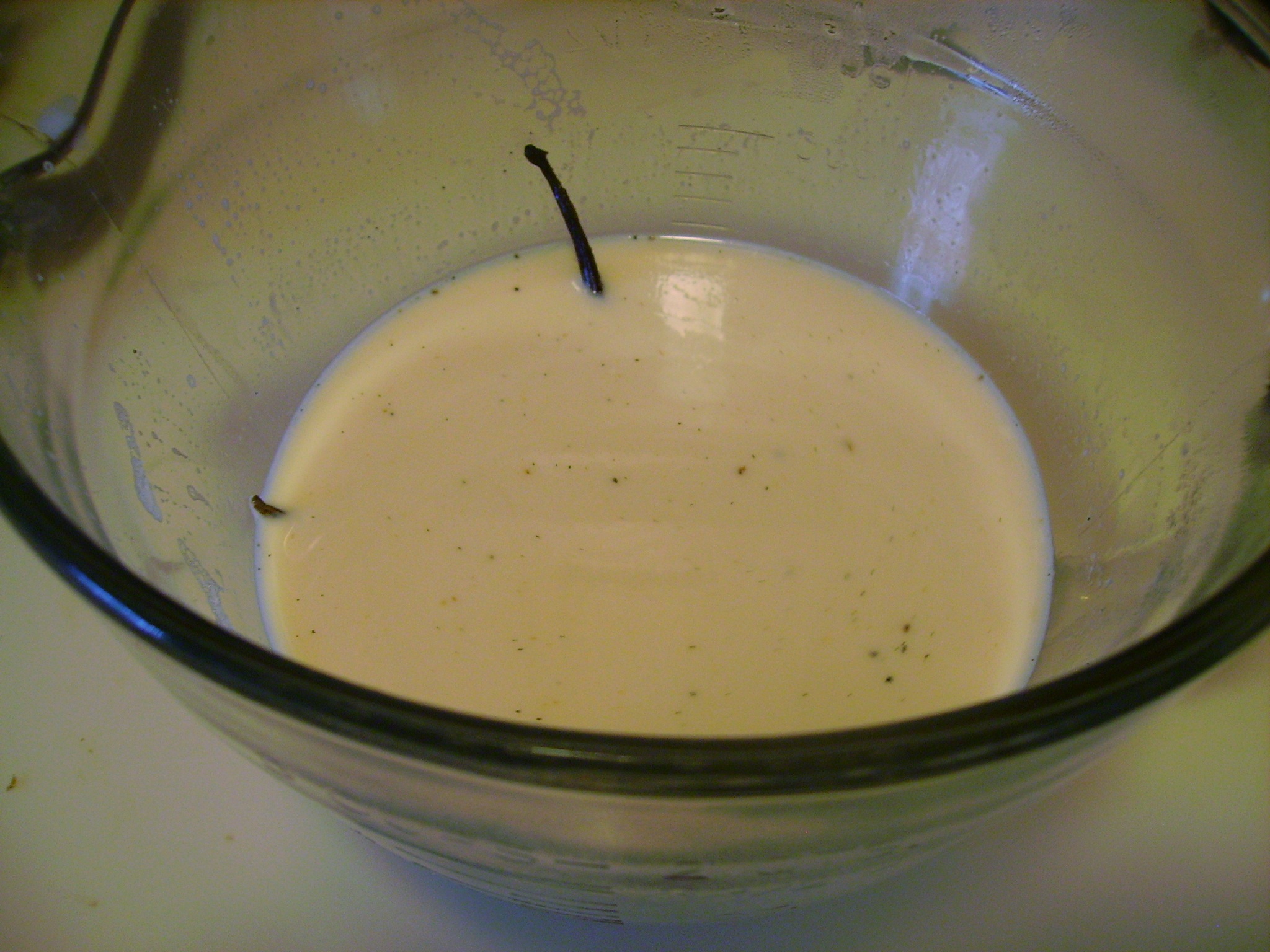 Meanwhile, harvest the vanilla bean by cutting it in half lengthwise and gently scraping all the seeds out. Set the seeds aside. To the reserved milk, add the sugar (I didn’t have raw sugar on hand, so I used brown sugar), salt, and the harvested vanilla bean stalks. Whisk for about 30 seconds to incorporate the sugar.

As a side note, vanilla beans sure are pricey. If you are not inclined to shell out $10 for two beans, you can definitely use vanilla extract. I think you might miss out a little, but then again, I can relate to the reluctance to buy such an expensive ingredient when a much cheaper substitute is available. Just add 1½ tsp. vanilla to the warm milk and you’re good to go. 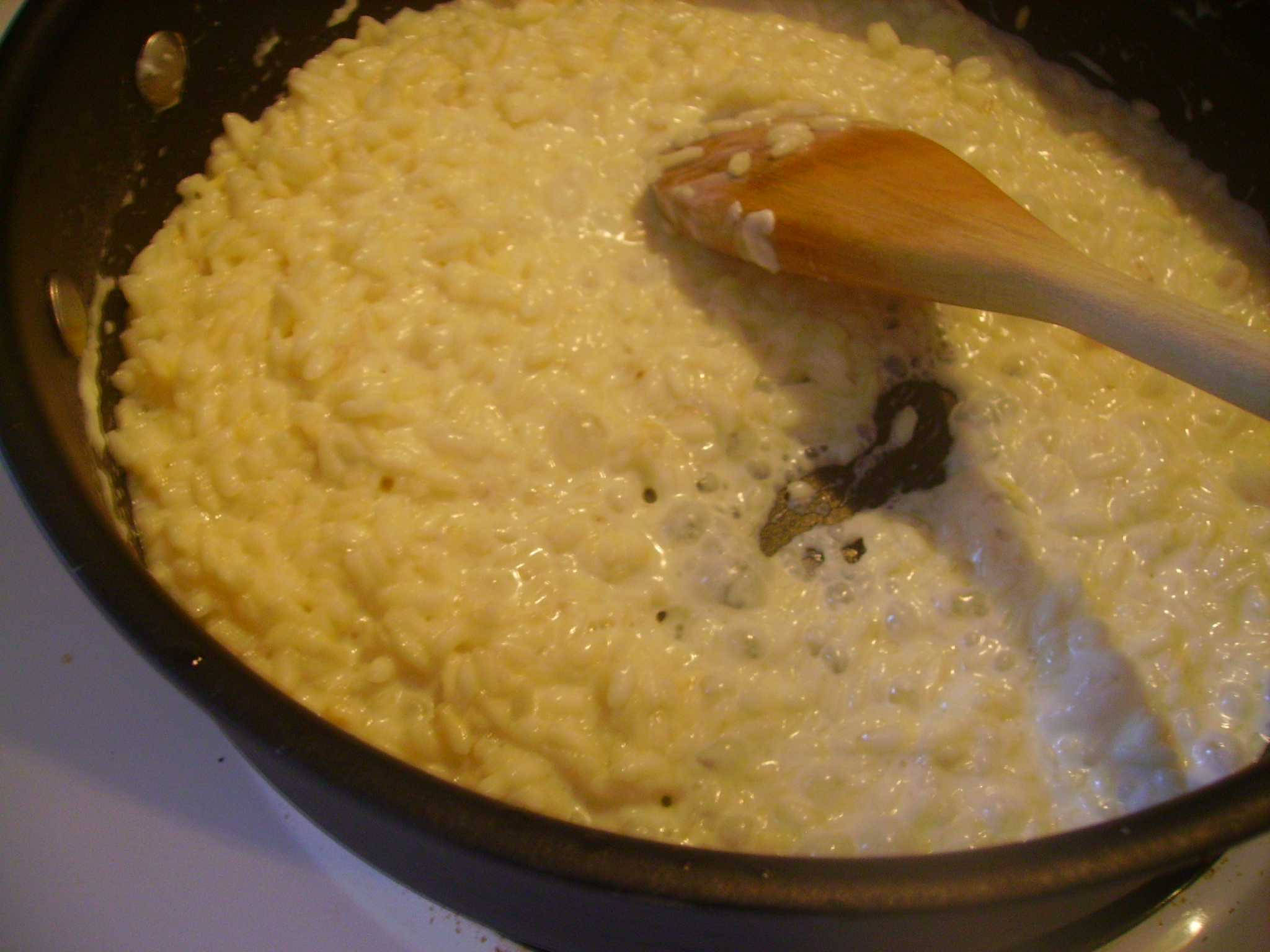 When the rice is bubbly and has absorbed most of the milk, pour the sweetened reserved milk into the skillet. Do this incrementally, stirring between additions, to prevent the rice from clumping. 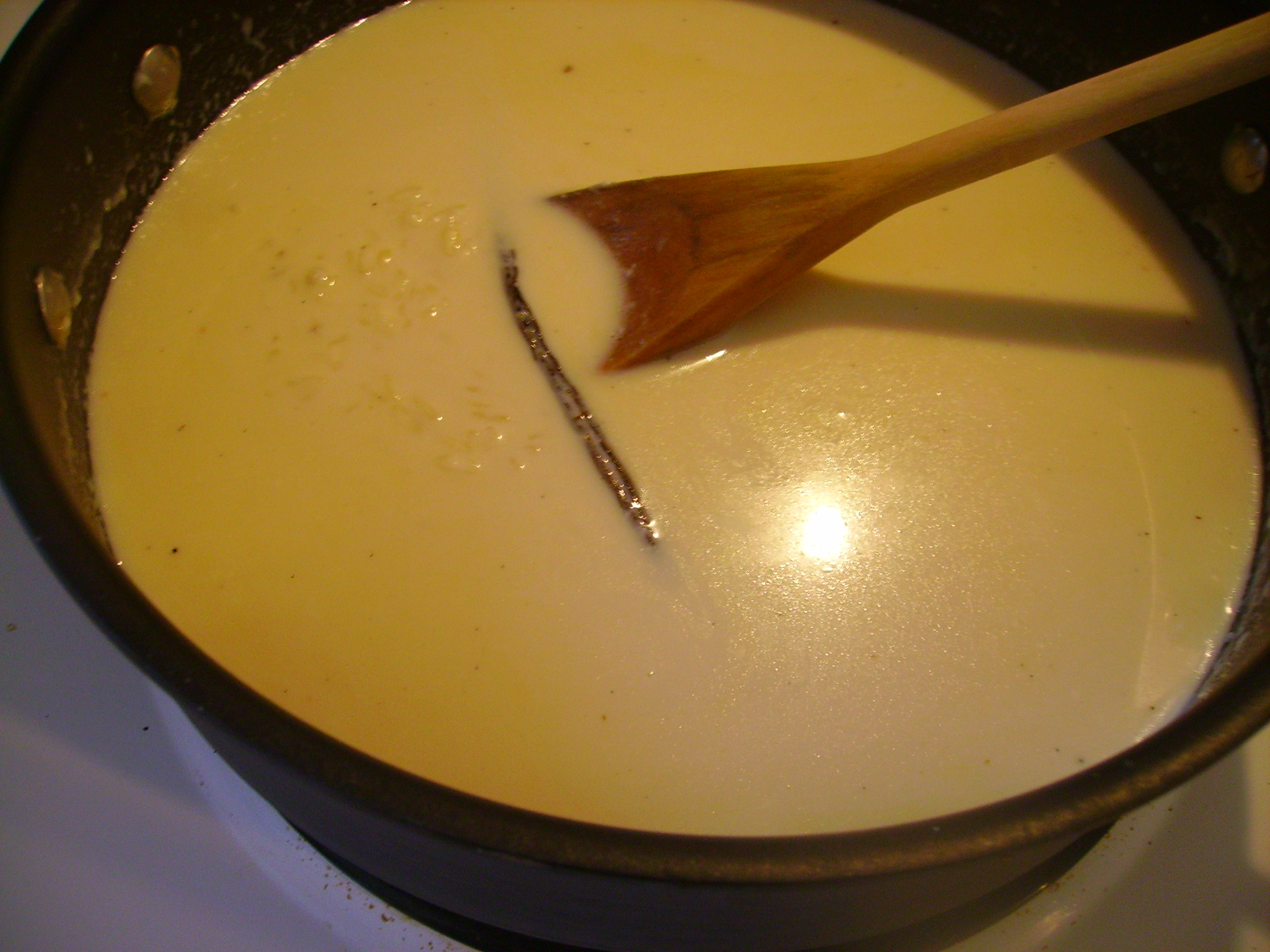 Stir, stir, stir. Keep stirring for about 10 minutes, until about half of the sweetened milk has been absorbed and the rice is visible from beneath the layer of milk. 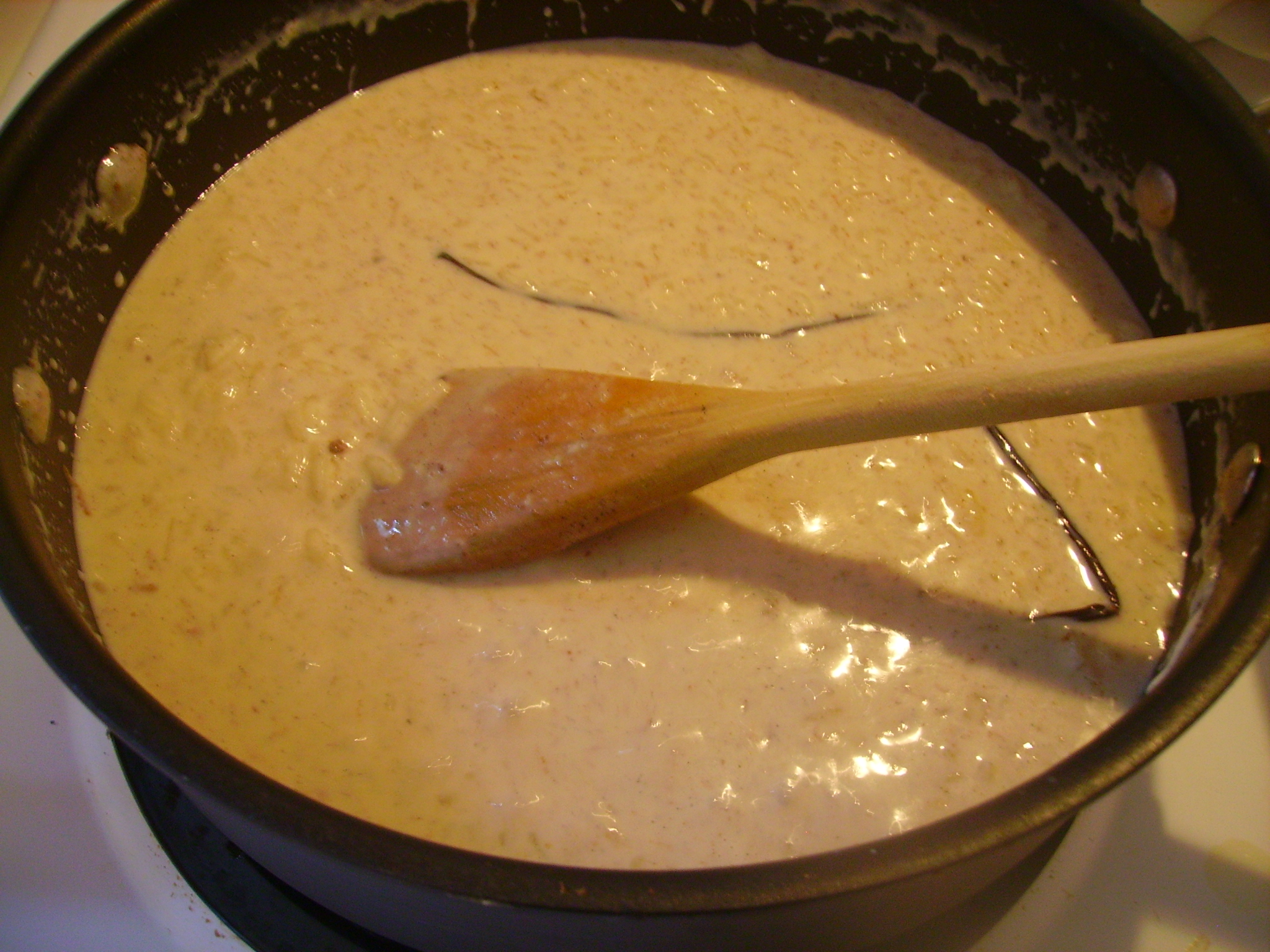 Add in the reserved vanilla seeds, the cinnamon, and the fresh nutmeg. Stir the flavorings in. If you find, like I did, that the cinnamon and vanilla seeds tend to clump together, use a whisk to break them up and help all of the flavors to distribute evenly. 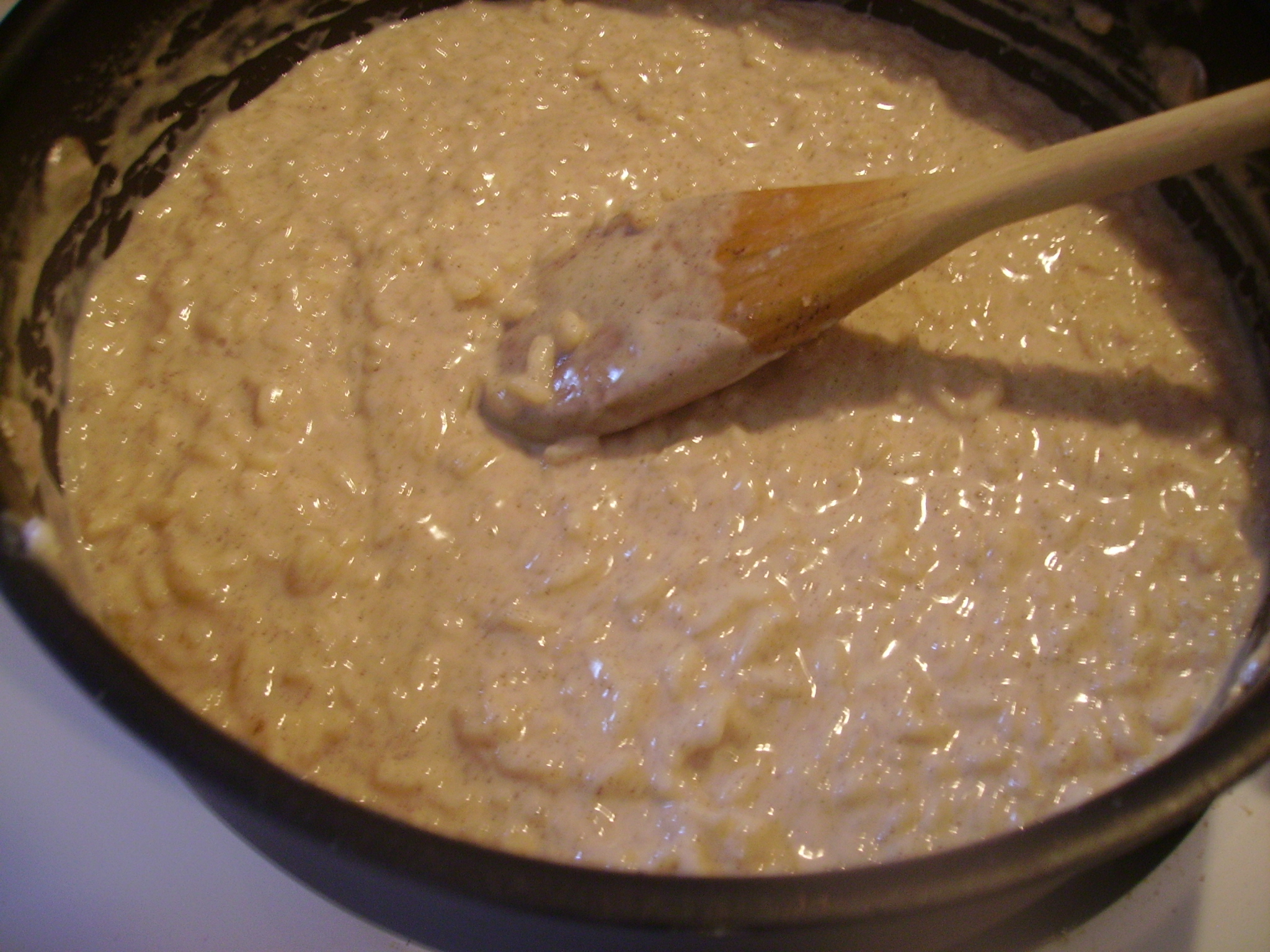 Continue cooking for another 5–10 minutes, until the rice reaches your desired consistency. I wanted mine to be a bit loose, so I removed the skillet from the heat after about 7 minutes, when the mixture was thick but still a bit soupy.

Take the vanilla stalks out of the pudding. Let cool for 5 minutes, during which time the pudding will continue to thicken a little. 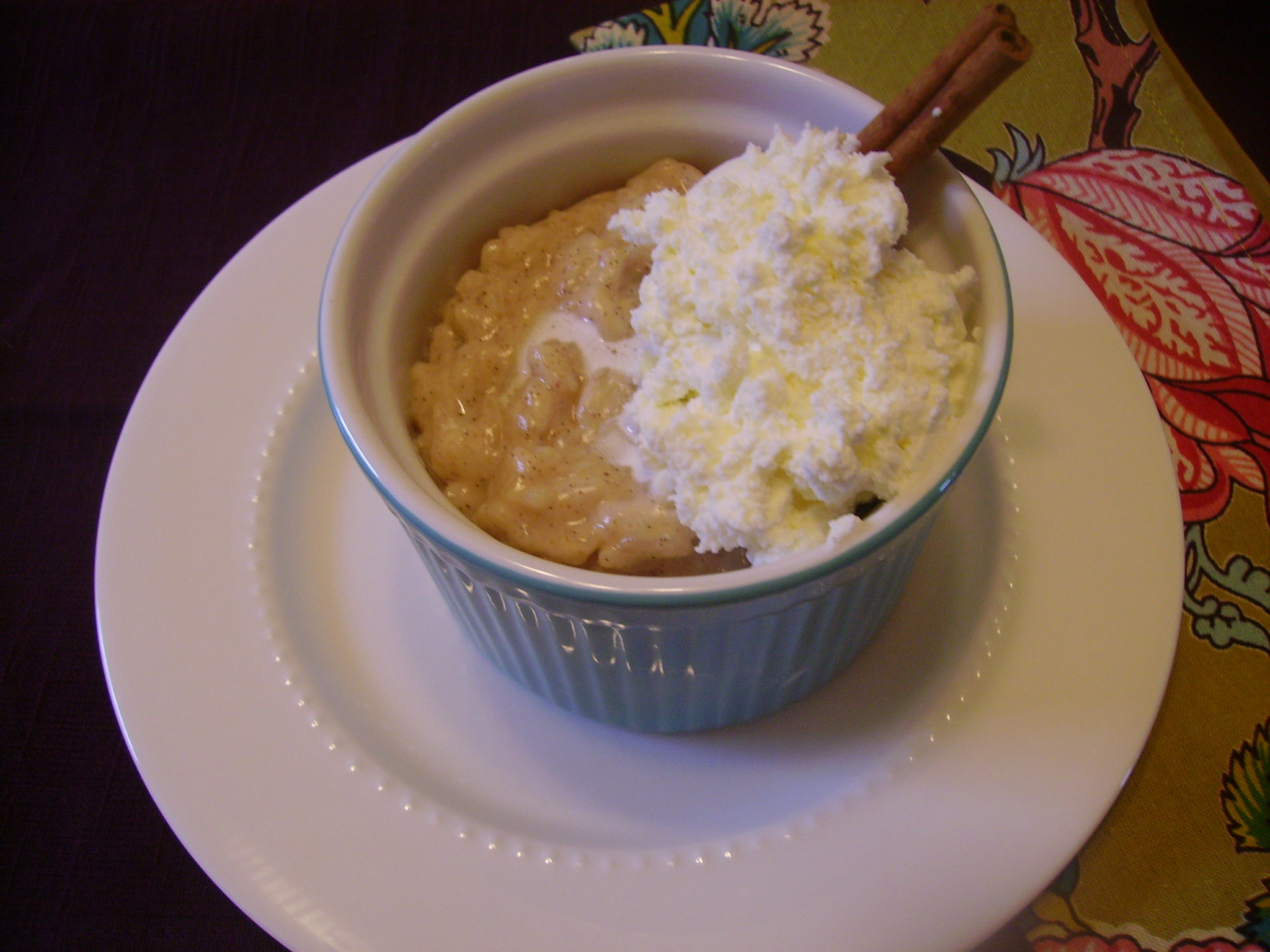 Meanwhile, whip the cream. When it forms soft peaks, add the granulated sugar and continue whipping until stiff.

Serve the risotto pudding topped with a dollop of freshly whipped cream.

Directions:
In a large saucepan, scald all of the milk, then transfer 2 cups to a separate bowl and cover to keep warm. Set aside.
Add the arborio rice to the milk in the saucepan and simmer on low heat, covered, for about 10–12 minutes until the rice is almost cooked.
Meanwhile whisk the brown sugar and salt into the remaining warm milk. Add in the vanilla stalk halves (sans seeds) to flavor the milk. Slowly pour this mixture, including the vanilla stalks, into the hot rice, stirring to prevent the rice from clumping. Continue to stir until most of the milk has been absorbed (rice is easily visible) and the mixture becomes thick and creamy.
Stir the vanilla seeds, cinnamon, and fresh nutmeg into the mixture. Continue stirring until the pudding reaches the desired consistency and the rice is completely cooked and tender.
Meanwhile, whip the heavy cream until it forms soft peaks. Add the sugar and continue whipping until it reaches the desired consistency.
Remove the vanilla stalks from the pudding and let the pudding stand for 5 minutes to cool and thicken. When ready to serve, scoop the rice pudding equally into 6 ramekins or pudding cups.
Garnish each with a stick of cinnamon and top with a dollop of the freshly whipped cream.