Wax Beans with Pepitas and Scallions 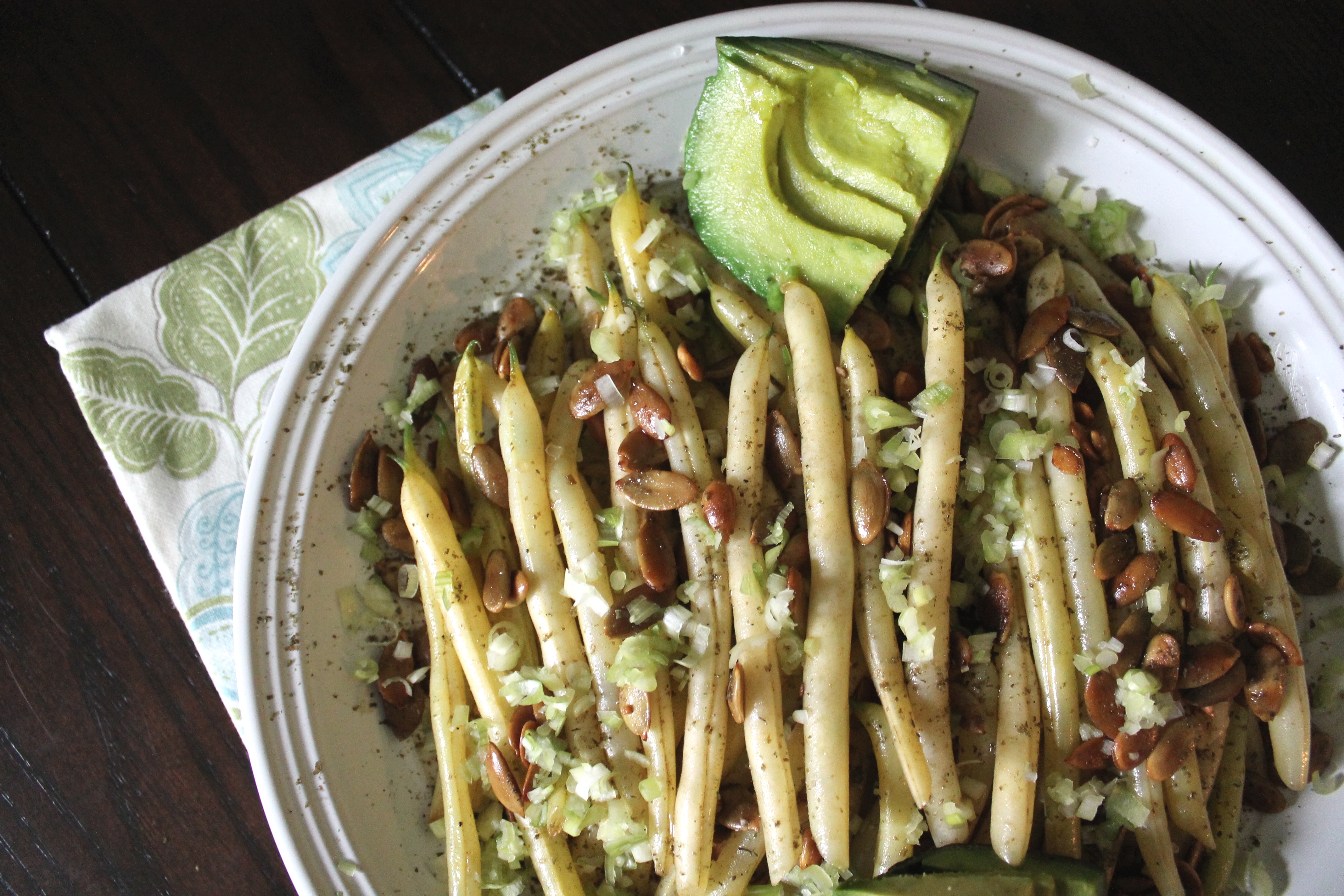 I have been wondering what the albino beans I kept spotting at the farmer’s market were all about.

Wondering sort of idly. Green beans aren’t my most sought after veggie, so I wasn’t all that desperate to try their pale friends.

That is, until I remembered one of the lofty goals I’d set for my farmer’s market trips this summer: try new things!

So last week I grabbed a pint of wax beans, which are basically pale yellow green beans, and set to work. While you can substitute wax beans in any recipe that calls for green beans, and they are often served alongside green beans in three-bean salads, I really wanted to make something that would highlight these blond beans themselves.

They do taste similar to green beans, but I found them to be slightly more heat resistant (that is, they didn’t lose all of their crunch after 1 minute in the pan), which is definitely a good thing in my book!

This recipe is so simple! 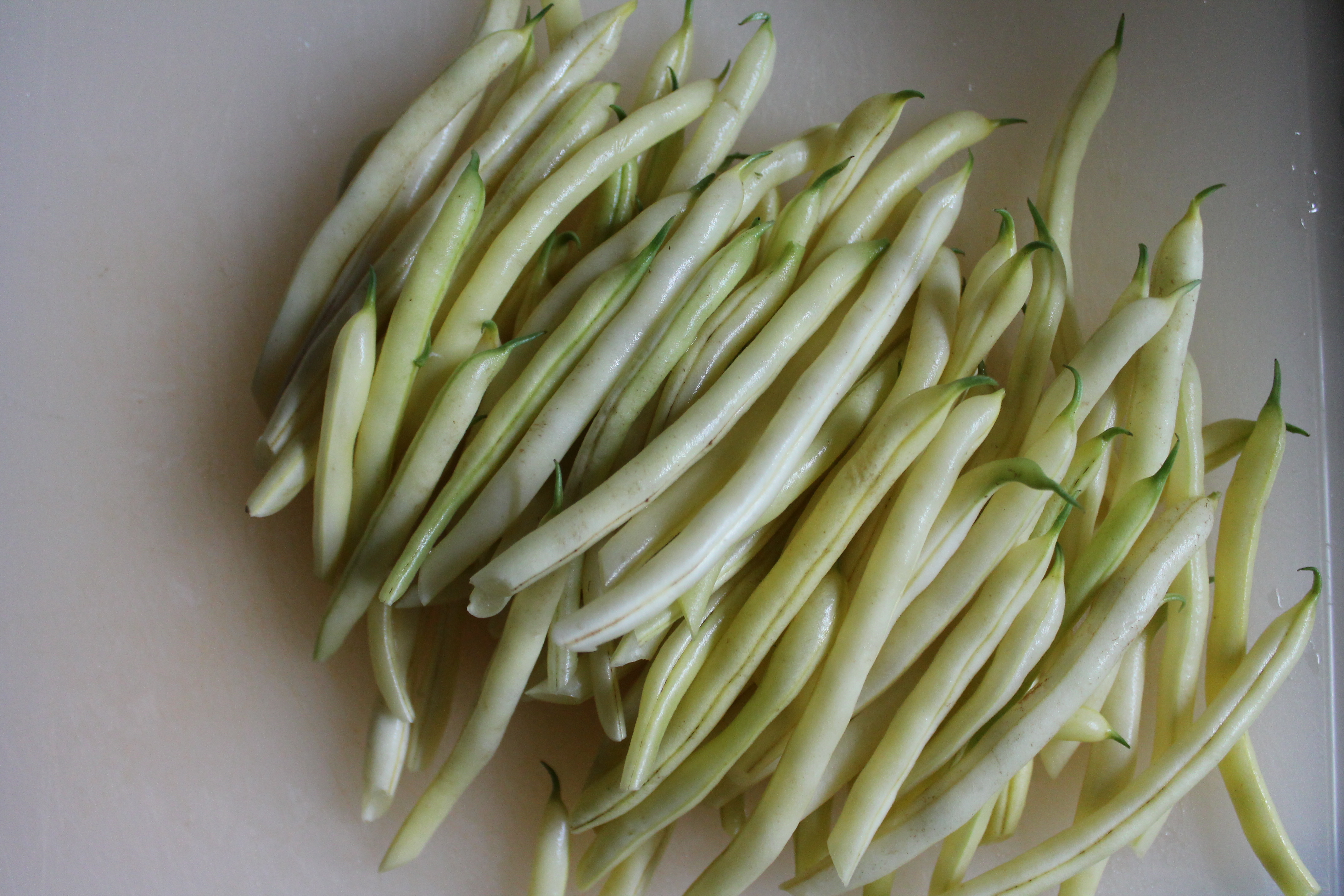 Trim and wash the wax beans. No need to cut them in half unless you like them better that way; I left mine long. 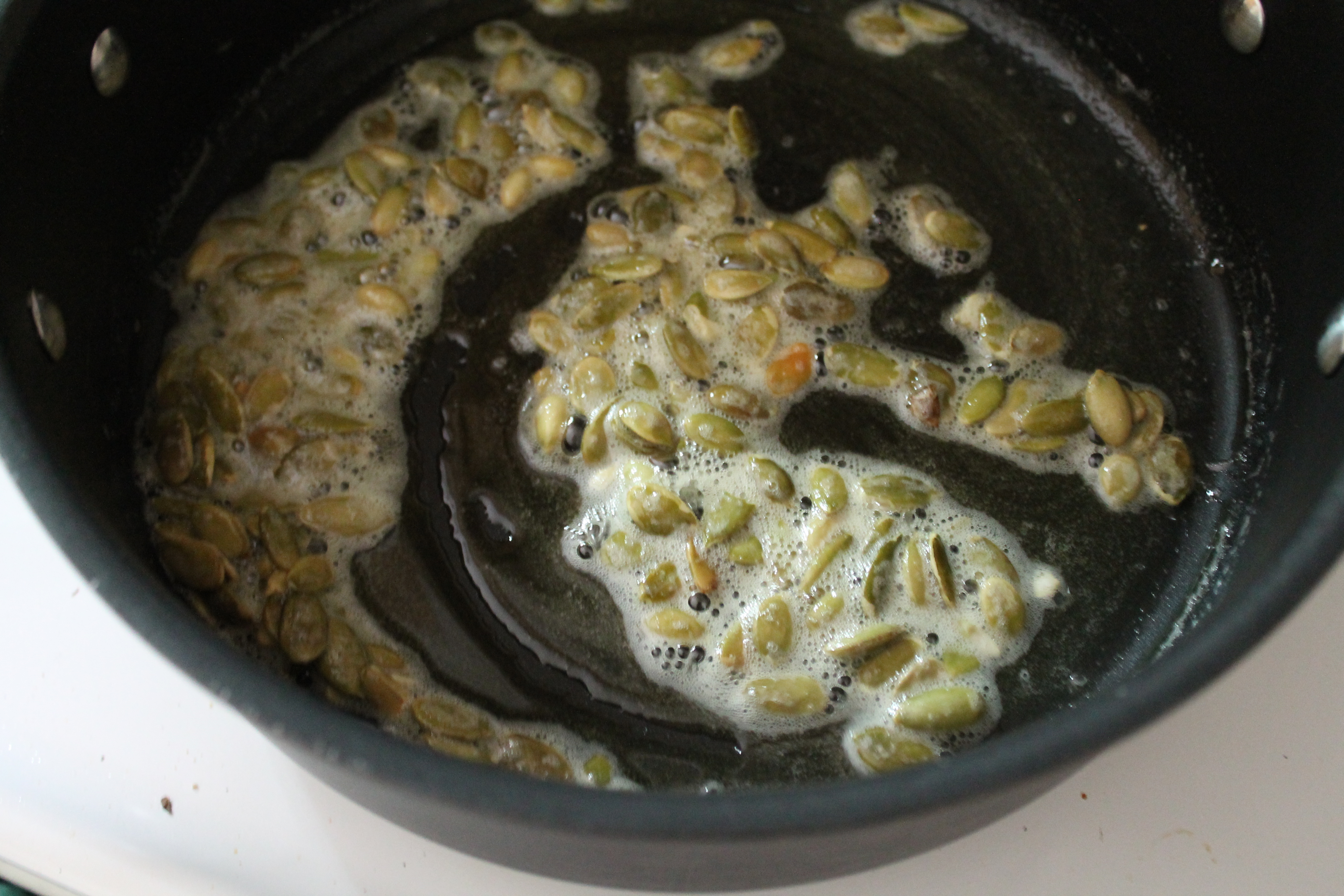 In a large pan, melt unsalted butter. Add the pepitas (you could also substitute nuts or another kind of seed) with a pinch of sea salt and cook them, stirring occasionally, until they are browned and crunchy. 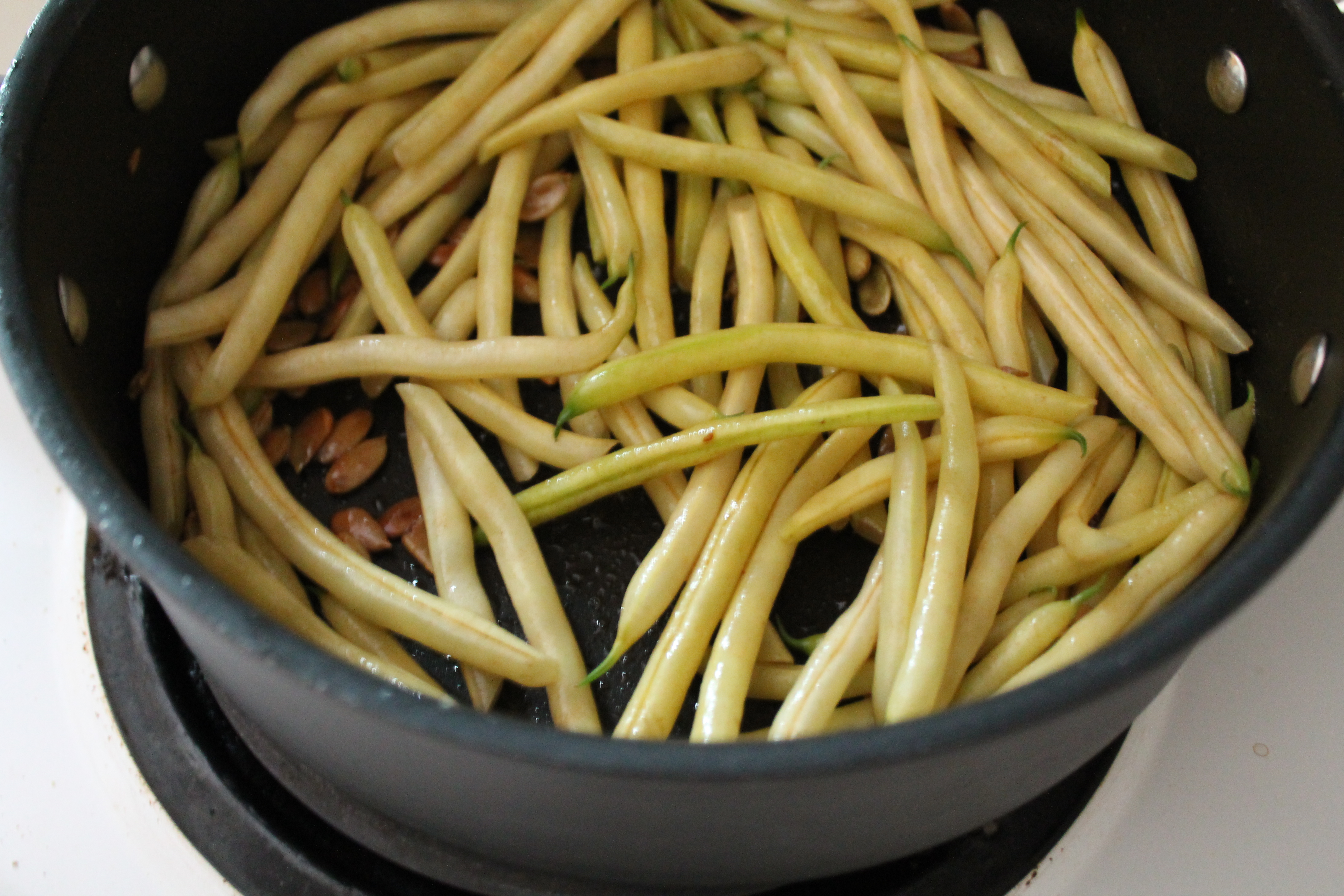 Add the wax beans. Toss to coat in the butter, then cover the pan and cook for 2–3 minutes, until crisp-tender. 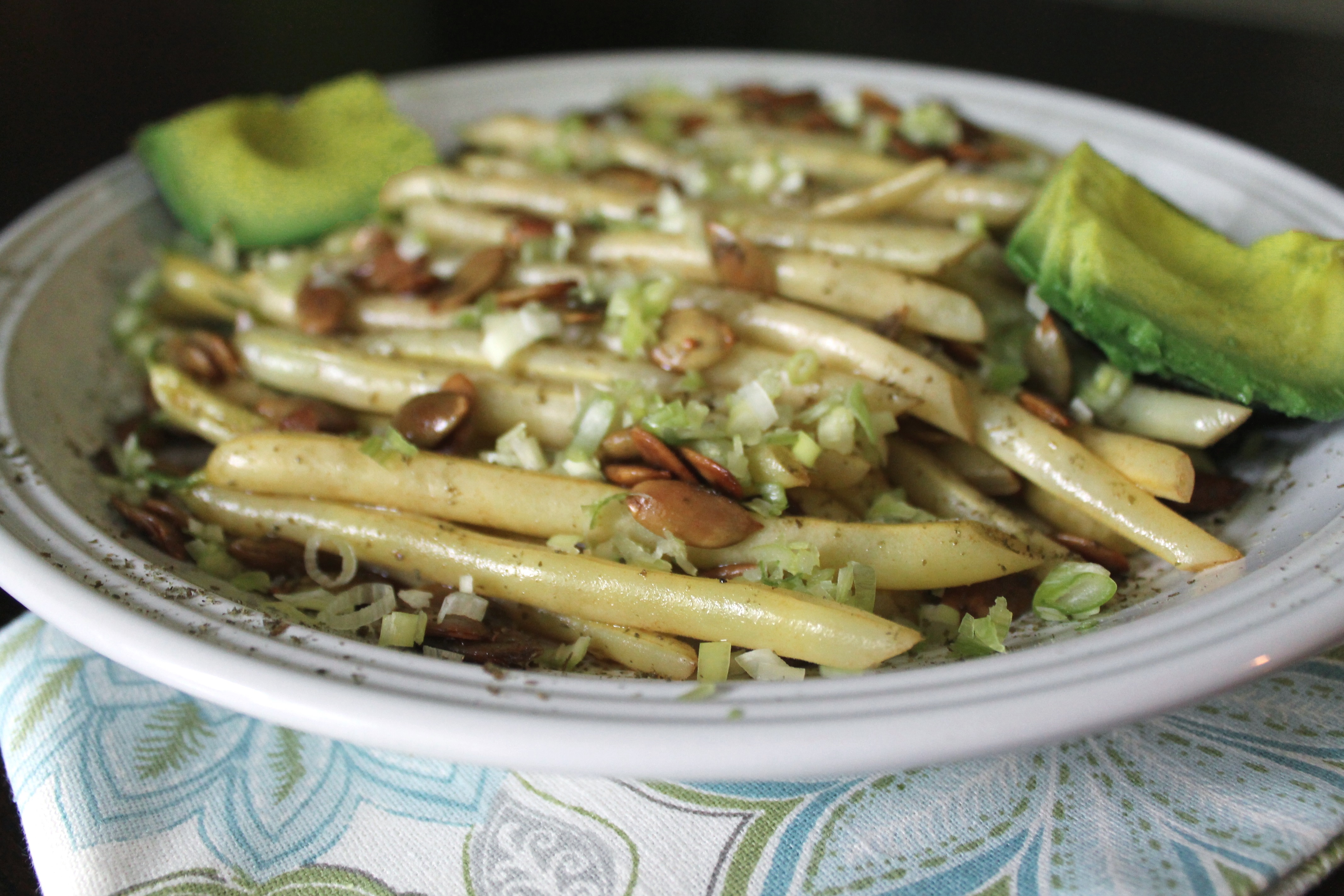 Transfer to a serving bowl or plate and top with minced scallions, za’atar or other savory herbs, and thinly sliced avocado. The fat from the avocado really adds a creamy heartiness to the beans and makes this side dish more substantial. I just paired a little slice of avocado with each bean, and it was grand!

Et voilà! A super easy, brightly flavored side dish that took almost no effort at all.

Wax Beans with Pepitas and Scallions

Directions:
Heat the butter in a large skillet over medium heat until it begins to brown. Add the pepitas and salt and cook until the pepitas are golden brown.
Toss the wax beans with the hot butter and seeds. Cover the pot and cook for 2 minutes, or until the beans begin to soften but do not lose their crispness. Transfer to a serving plate.
Top the beans with minced scallions and a sprinkle of za’atar. Serve alongside the avocado for richness.